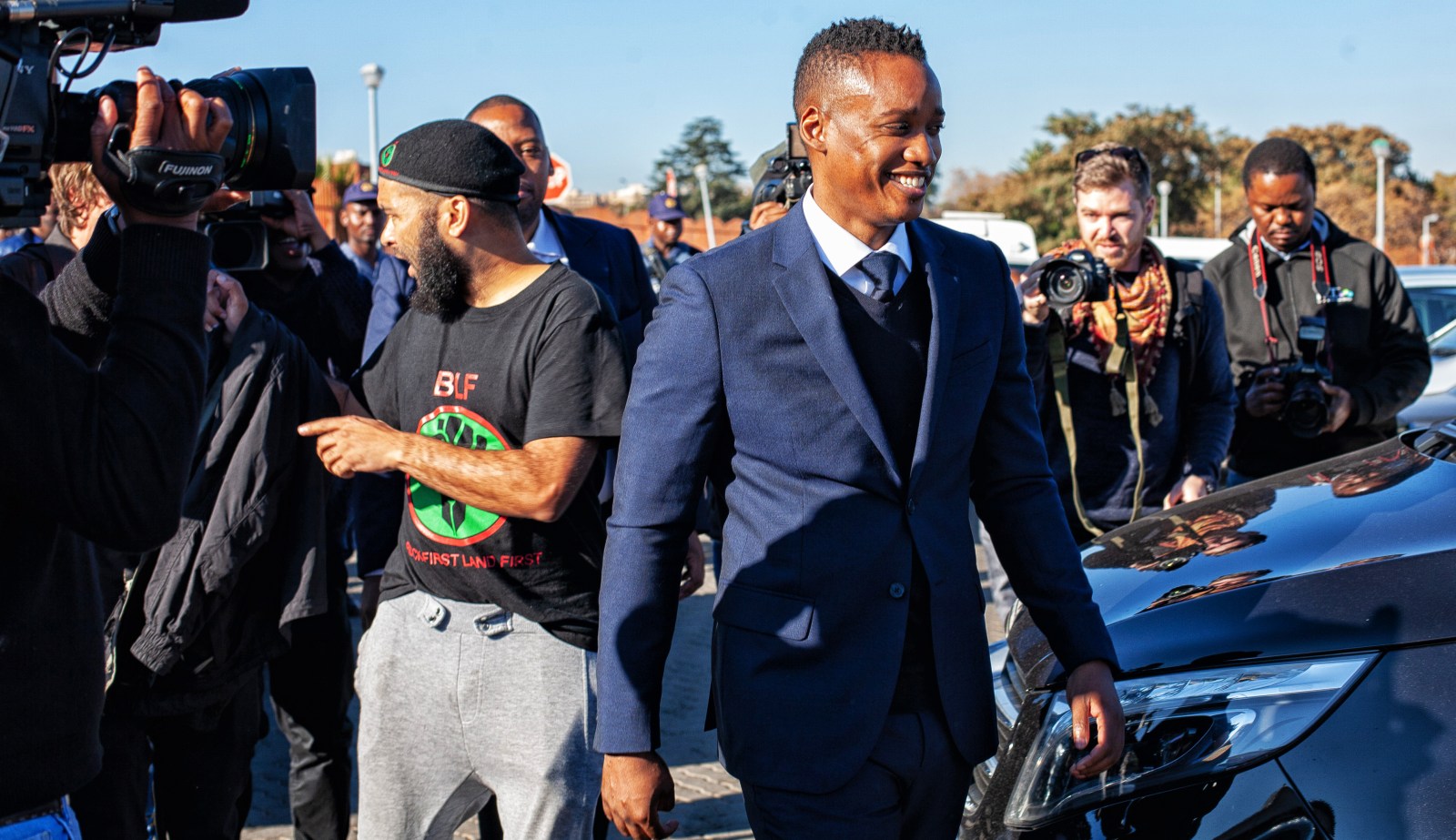 Former president Jacob Zuma appeared briefly outside the Randburg Magistrate's Court on Thursday to support his son Duduzane, whose culpable homicide case was postponed to August. Neither Zuma got involved in the Black First Land First confrontation with Afriforum.

Duduzane Zuma’s supporters claim that the National Prosecuting Authority (NPA) is politically targeting the 34-year-old and a flyer shared by a group called “Freedom for Duduzane” called on them to protest outside the Randburg Magistrate’s Court on Thursday morning. Few showed up before the case.

Zuma appeared briefly on two counts of culpable homicide before the case was postponed to 23 August, allowing prosecutors time to deliver the case docket and record of inquest to Zuma’s defence team.

A convoy of police VIP Protection Unit cars waited outside court as Duduzane Zuma left. His father, former president Jacob Zuma, sat on the back seat of a BMW. He reportedly planned to attend court and support his son but arrived too late. He did not get out of the vehicle.

Black First Land First (BLF) have rallied around the former president in his efforts to avoid going to jail on charges of corruption and maintain political clout after his February resignation. About a dozen BLF supporters came to court on Thursday.

They shepherded the young Zuma into a black van while warning journalists not to act like “Stratcom”, the apartheid government’s strategic communications operation, whose propaganda campaigns targeted the late Winnie Madikizela-Mandela.

There was an outcry in some quarters on Monday when Duduzane Zuma’s feet were in leg irons as he appeared in the Johannesburg Specialised Commercial Crimes Court on charges of corruption. He was not cuffed on Thursday.

The two counts of culpable homicide relate to his 2014 crash on Johannesburg’s M1 with a taxi. Passenger Phumzile Dube died soon after the accident and Nanki Jeanette Mashaba died weeks later in hospital.

“This court finds that the death of the deceased Phumzile Dube was prima facie brought about by the negligent actions of suspect two, Mr Zuma,” Magistrate Lolita Chetty said in a 2014 inquest. In 2015, the NPA declined to charge him.

Charges were finally brought against Zuma after AfriForum’s private prosecutions team, led by Advocate Gerrie Nel, threatened to prosecute the matter themselves. NPA spokesperson Phindi Mjonodwane said they decided to prosecute after reviewing the case.

BLF members confronted AfriForum CEO Kallie Kriel outside court on Thursday as he tried to address media. Police had to intervene as they pressured Kriel to leave, swore at him, told him he had no right to speak on the issues, and to “go back to Europe”.

“No fucking court is going to stop us from defending ourselves against settlers. They stole our land. They make us slaves. Now, today they’re coming to take our dignity,” said BLF leader Andile Mngxitama using the group’s now-common rhetoric of threats and violence.

The small group, which has close ties to the Gupta family, have repeatedly arrived at events to defend Zuma and his allies or yell insults at those perceived to be his opponents. In a statement ahead of the case, BLF claimed President Cyril Ramaphosa and Public Enterprises Minister Pravin Gordhan had political vendettas against the Zumas.

The young Zuma didn’t comment on his case but appeared relaxed and was cordial with journalists on Thursday. Over the weekend, former president Zuma said at the funeral of his son Vusi Nhlakanipho Zuma, that the 25-year-old’s health issues were exacerbated by negative media reports about the family.

Duduzane Zuma crashed into the taxi on a rainy night in 2014, claiming he hit a puddle and lost control of his Porsche. During the inquest, Chetty said he was negligent for driving at normal speed in hazardous conditions.

Attorney Tyrone Maseko said prosecutors need to prove Zuma showed even the slightest degree of negligence. “You are required to observe the highest degree of care on the road to fellow motorists,” he said.

Maseko said prosecutors, after establishing the link between Zuma’s actions and the deaths, don’t need to prove direct or indirect intent, but show his mistake could have been avoided: “If you were careful enough, it really should not happen.”

He said Zuma’s defence team could either argue his actions didn’t cause the deaths or that he showed sufficient care and was not negligent.

The young Zuma has had a torrid week since returning from Dubai last Thursday, being briefly detained at the airport, attending his brother’s funeral, and appearing in court on corruption charges on Monday before his Thursday court case.

He was released on R100,000 bail on Monday for charges of conspiracy to commit corruption. He had to hand over his South African and United Arab Emirates passports, but it’s unclear whether he will be granted his request to at times travel outside of the country to see his pregnant wife in Dubai.

In the corruption case, the NPA said he was present when Ajay Gupta, a close business associate, allegedly offered Mcebisi Jonas R600-million to take the job of finance minister and assist the Gupta family’s business deals.

That case was postponed to 24 January 2019 and Zuma’s lawyers have said they hope both court hearings can proceed speedily. He has maintained his innocence on all charges. DM