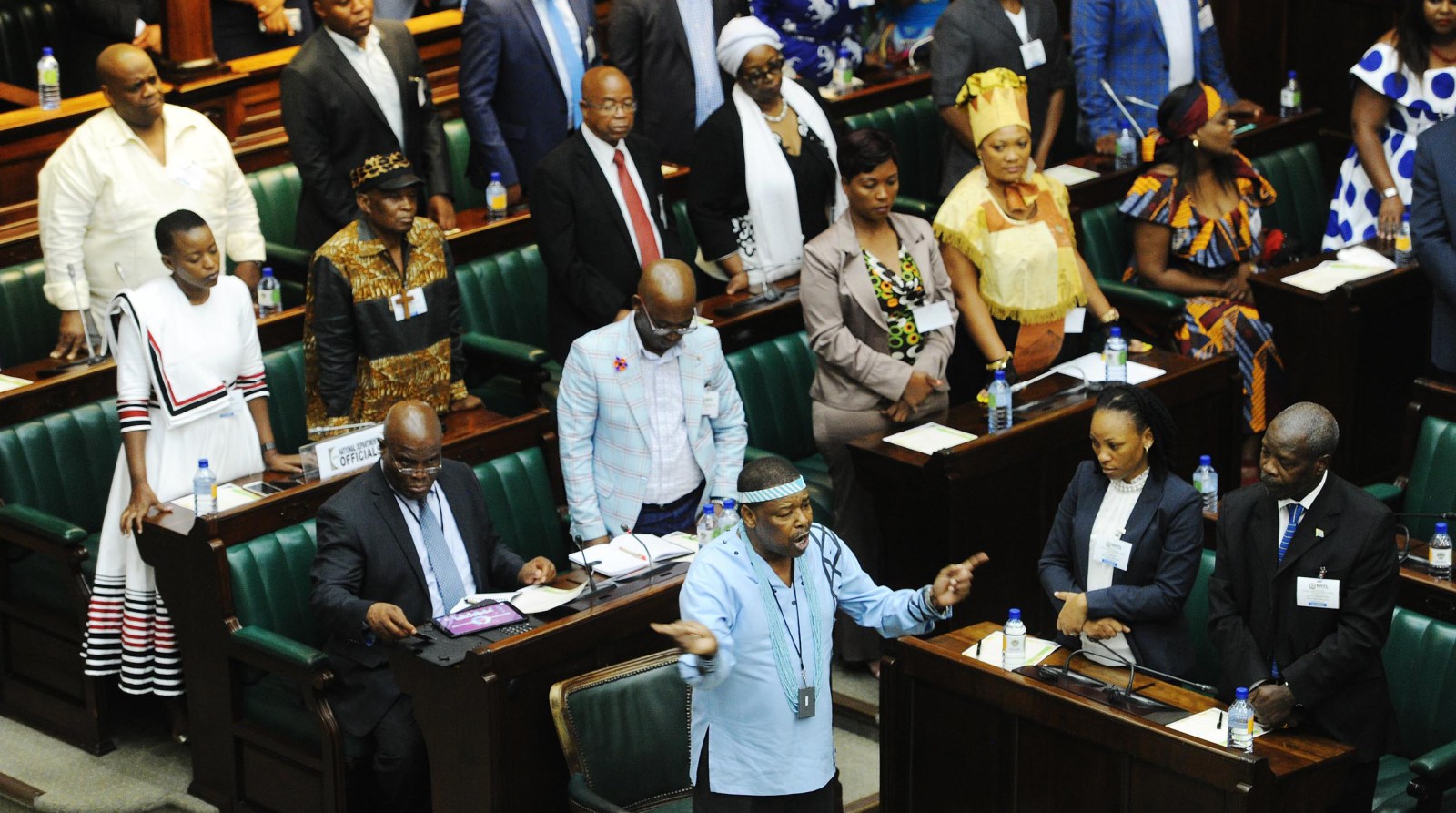 There are currently 50 Bills at various stages of the legislative process in Parliament, many dating back to 2017 or earlier. Last year Parliament passed 11 laws, aside from the statutorily required finance laws underpinning the Budget; the annual average since 2014 has been 18 draft laws.

The Political Party Funding Bill to transparently regulate private donations, and the Public Audit Amendment Bill that gives the auditor-general teeth to refer irregularities to law enforcement, in many ways represent the best of lawmaking. Parliament took the initiative itself, acting with speed and a sense of purpose to produce public interest legislation. Unfortunately, this happens all too seldom.

All that’s needed for the Public Audit Amendment Bill and Political Party Funding Bill to become law is President Cyril Ramaphosa’s signature. Both pieces of legislation have been drafted, gone through public hearings and been revised by the corresponding committees, the Standing Committee on the Auditor-General and an ad hoc committee, before adoption in the National Assembly and National Council of Provinces (NCOP) – all within seven and 11 months respectively.

This stands in stark contrast to the usual length of time a Bill sits in the legislative pipeline – a year, and sometimes longer, at Parliament, where draft laws are tabled only after a departmental process of public comments, potential revisions and a final nod from Cabinet, which also could easily take a year or so.

And that’s the approximate time line even when there is political will and push. Almost three months after Ramaphosa’s flagship project, the national minimum wage, was meant to be implemented on 1 May 2018 in line with the National Economic Development and Labour Council (Nedlac) agreement of February 2017, that draft law is still in the making. The Labour Department tabled the draft legislation in the dying days of the 2017 parliamentary calendar, but it remains unclear why it took around three months for the labour committee to start dealing with it in the 2018 parliamentary year.

The National Assembly approved the legislation at its last sitting at the end of May 2018, but the 10-week recess for an extended constituency period in the year before the 2019 elections meant delays in the NCOP process. Now the expectation is that the National Minimum Wage Bill, and related legislative amendments, would be adopted by the NCOP towards the end of 2018. Only then will Ramaphosa be able to sign into law the national minimum wage initiative he shepherded into being as deputy president.

When there isn’t such political will, or when an issue requiring legislative intervention may be deemed too much of a pickle, it becomes fuzzy. Take land, be it tenure security in communal areas or restitution, both of which are central to South Africa’s Constitution, but currently in a legislated vacuum.

In early July 2017, the draft Communal Land Tenure Bill was finally released for public comment, some seven years after the Constitutional Court in 2010 declared invalid the Communal Land Rights Act. One reason is that traditional leaders have been vocal in opposing alternatives to the traditional councils they head for purposes of administering the land. Community property associations (CPAs) are regarded with suspicion as alternate rural power centres, a view shared by many in the governing ANC. This draft Bill, which allows communities to vote by a minimum of 60% for either traditional council, CPA or other structure to administer the communal land, has yet to surface. It has not yet come to Parliament, and there have been no indications as to when it might.

With respect to restitution – Section 25(7) of the Constitution provides for restitution of those who were dispossessed by racially discriminatory laws or practice – it’s Parliament’s rural development committee that has stepped into the breach. In late July 2016 the Constitutional Court declared invalid the Restitution of Land Rights Amendment Act, which reopened a second claims window to June 2019, over the failure to hold meaningful public consultations. The NCOP had allowed just eight calendar days to hold public hearings countrywide, deliberate and obtain the required provincial mandates to pass the law as it did on 27 March 2014. There were “no cogent reasons” for this rush – aside from the pending May 2014 elections.

While the restitution reopening was of “paramount importance and public interest” and required that “there be reasonable public participation in the legislative process”, according to the unanimous judgment, Constitutional Court Judge Mbuyiseli Madlanga said:

“Nothing was placed before the Court indicating that – besides the desire by Parliament to finalise it before the end of term – the Bill itself was objectively urgent.”

By the time the Act was declared invalid, some 160,000 new restitution claims had been submitted. The court ruled that no new claims could be accepted, and those submitted may not be dealt with before the outstanding claims from the first restitution window that closed in December 1998 are finalised.

The Constitutional Court gave Parliament 24 months to redraft a new restitution law, and if for some reason that did not happen – “It is not inconceivable that because of a shift in government policy or any other reason, Parliament may decide not to re-enact an amending Act, or only do so after many years” – the Chief Land Claims Commissioner must approach the Constitutional Court for “appropriate relief on the settlement, and referral to the Land Claims Court of outstanding new claims” within two months of the 28 July 2018 deadline.

The Rural Development Department did not initiate such new legislation. It’s speculation, but perhaps officials were relieved over the declaration of invalidity as their July 2013 impact assessment showed the anticipated 397,000 new restitution claims by the time the window was scheduled to end in June 2019 at a cost of R175-billion. Over the past three years, the restitution budget has hovered at just over R3-billion annually, according to the Estimates of National Expenditure.

In early 2017 ANC MP Pumzile Mnguni brought a private member’s restitution Bill that took the better part of a year to jump through various drafting, tabling, tagging and other procedural hurdles. For this reason, the public hearings on restitution only started in June 2018, ending in Worcester this week. The Constitutional Court has been approached for an extension to the 24-month deadline, according to the parliamentary committee, and Chief Land Claims Commissioner Nomfundo Ntloko-Gobodo this week said her office would approach the court in line with the judgment.

But it’s also the police committee that had to act against rapidly approaching Constitutional Court deadlines to fix defective laws. The Independent Police Investigative Directorate (Ipid) legislation has to be amended to ensure the required independence from ministerial interference following the September 2016 judgment against then police minister Nkosinathi Nhleko, who had suspended Ipid boss Robert McBride. The Constitutional Court gave Parliament 24 months, effectively 5 September 2018, to fix the defect.

It is understood the Civilian Secretariat for Police had started drafting amendment legislation, but this simply took too long – the various hurdles to jump in the ministerial and Cabinet processes would have meant the Constitutional Court deadline would be missed. And so Parliament’s police committee stepped in, albeit in a most limited way, to meet the minimum requirements in line with the judgment. After a six-month process, including public hearings and deliberations, the committee this week adopted the Ipid Amendment Bill. But it’s still going to be tight to meet the judicial deadline to pass the new law, given parliamentarians’ return from their two-month recess in mid-August.

There are currently 50 Bills at various stages of the legislative process in Parliament, many dating back to 2017 or earlier. Last year Parliament passed 11 laws, aside from the statutorily required finance laws underpinning the Budget; the annual average since 2014 has been 18 draft laws.

The pending draft laws include the Traditional Courts Bill tabled in January 2017 after a significant revision to include an opt-out after an earlier version was rejected in 2012, as it had been in 2008, and the 2015 Expropriation Bill, referred back to Parliament over concerns with the consultation process. Also still pending is the Mineral and Petroleum Resources Development Amendment Bill, referred back to Parliament in January 2015 over presidential concerns that it would not meet constitutional muster as many publicly stated deadlines have come and gone for the finalisation of this law, crucial for policy and legislative certainty in the mining sector.

While many of the draft laws are technical amendments, like the wrongful medical treatment claims exceeding R1-million in the State Liability Amendment Bill, others are not. This includes the Prevention of Hate Crimes and Hate Speech Bill, which just made the end of May 2018 cut-off for Bills to be dealt with before the national legislature rises ahead of the 2019 elections, according to a programming committee that agreed to the extended mid-year recess.

There are as few as six months left in the current parliamentary calendar, which will see MPs return from their year-end recess only in early February 2019 after yet another extended constituency period ahead of the 2019 elections.

Legislative work will tussle with standing items like processing the Medium-Term Budget Policy Statement (MTBPS) from late October onwards, and high-profile items like the constitutional review committee report on the need for a constitutional amendment for land expropriation without compensation.

Tough choices in a pressurised parliamentary calendar are on the cards. DM