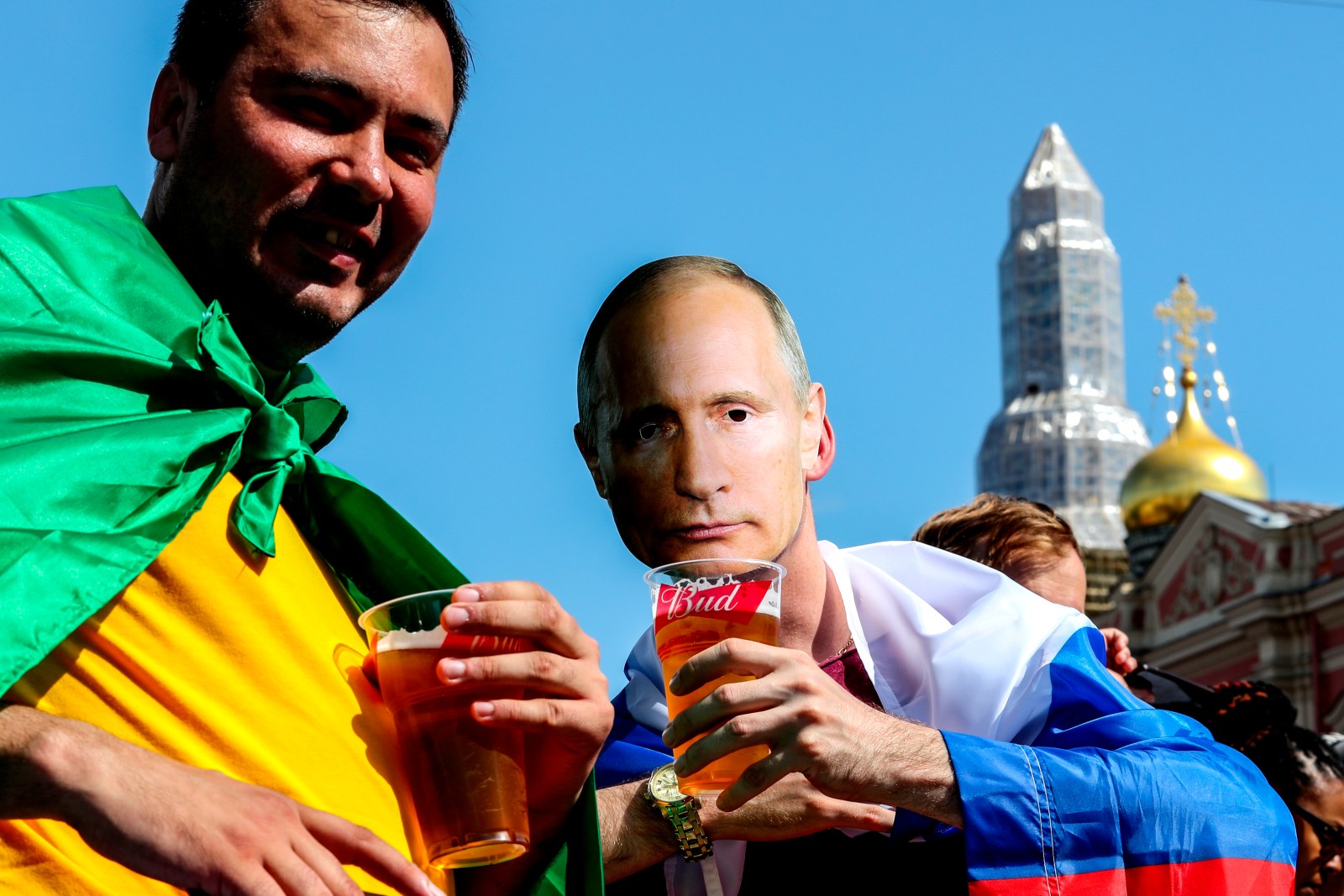 Soccer fan with the mask depicting the Russian President Vladimir Putin drinks a beer at Fan Fest area as he watches the match of FIFA World Cup 2018 between Serbia vs Costa Rica in Samara, in St Petersburg, Russia 17 June 2018. The FIFA World Cup 2018 will take place in Russia from 14 June to 15 July 2018. EPA-EFE/GEORGI LICOVSKI

What's a World Cup if African greatness isn't being ignored?

Wrapping up a weekend for the underdogs, Switzerland held Brazil to a 1-1 draw in the final match on Sunday night. Neymar stood out mostly because of his hairstyle, as well as for being repeatedly fouled and targeted by the Swiss. A few eyebrows were raised about a possible penalty but, in a match that was jam-packed with shots, Brazil really can’t get their grump on too much after failing to take their chances. Watch the highlights here.

According to our esteemed Serbian correspondent, the vibe when Aleksandar Kolarov scored the winner was mental. Along with kicking a ball, players were also kicking each other a fair bit and things nearly spilled over towards the end with Nemanja Matic and Costa Rica’s assistant coach Luis Marin clashing. Matic wanted the ball for the throw in, but the coach wanted it for himself. Boys will be boys. Watch the highlights here.

Turns out Mexico has a better wall than Donald Trump could ever dream of. If Argentina’s draw against Iceland was a shocker, this was a full-blown meltdown. Germany didn’t always look like defending champions but credit to Mexico, despite their dodgy finishing they put up one heck of a defensive fight.

For context, Germany had 25 attempts at goal and just nine of them were on target. Mexico had 12 with half of them on target. There were nine blocked shots between the two sides and two off the woodwork, from Germany’s Toni Kroos and Julian Brandt. Watch the highlights here.

We’re being sold this dummy again. Mo Salah started and remained on the bench for Egypt’s opener, despite assurance from his coach that the Liverpool striker was fit. The Egyptian Football Federation said this weekend that they did not want to risk him against Uruguay, but promised everyone that he’s good to go for the crunch clash against Russia. [BBC]

If you thought you had a raw deal for failing to perform at your job, at least you’re not South Korea’s Son Heung-min. Since his breakout season in the Bundesliga, he’s been trying to avoid what all South Korean have to do: military service. There are a select few sporting achievements that can earn him an exemption, winning an Olympic medal, winning the Asian Games or doing really well at the World Cup. For the class of 2002, a semi-final berth was enough, but it’s all up to the government. [The Guardian]

On paper, South Korea vs Sweden might be seen as one of the tamest encounters of the World Cup. But behind the scenes, subterfuge and sacrilege is brewing. South Korea’s coach Shin Tae-yong said on Sunday that he made his team wear different number shirts because opponents can’t tell them apart. Sweden, meanwhile, were forced to apologise after they admitted to spying on their opponents at a closed training session. [Daily Maverick]

Rumours of Cristiano Ronaldo’s greatness have been greatly exaggerated, according to Asamoah Gyan. After the Portuguese’s hat-trick against Spain on Friday, a stat claiming he was the first player to score in an eighth major tournament in a row went viral. But that’s not actually true. Gyan has done so at nine tournaments, having found the the target at three World Cups and six African Nations Cups. That stat seems to have originated on statistics specialists Opta’s Twitter feed. Their definition of “major” includes World Cups, Euros and Copa America, but doesn’t include AFCON. Strange.

“Cristiano is very prone to diving and they award him almost every foul.”

At the risk of raising a storm of Jamie Oliver proportions, we’re going to show some love for Jollof Rice. When the recipe comes from a book called All Nigerian Recipes, we’re hoping that we’re in the clear. The dish is popular in various West African countries, with a few minor variants on ingredients.

There’s a touch of cooking rivalry, too. Nigerians and Ghanaians have long debated whose version tastes better. Last year, this tussle reached such lofty heights that the first ever Jollof Festival was organised in Washington DC, USA. The winner was Atinuke Ogunsalu of Queensway Restaurant & Catering in Maryland. A Nigerian. DM