Politicians will struggle to woo ‘betrayed’ youth ahead of 2019 vote 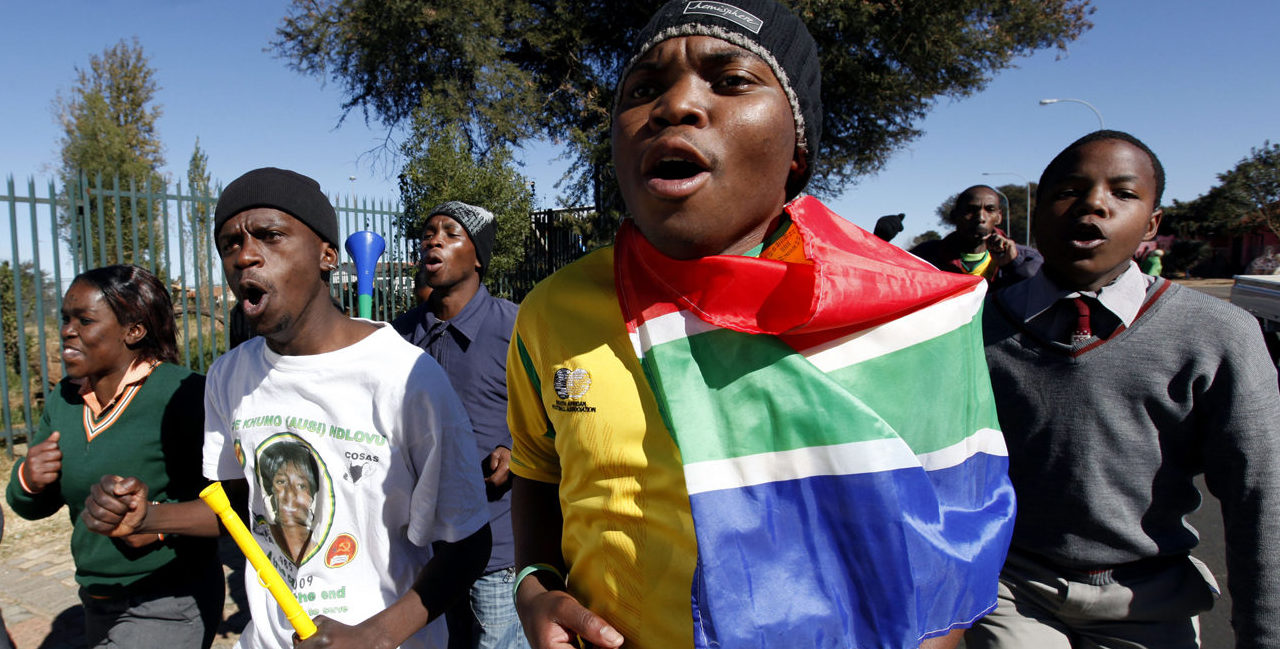 School children and locals parade to the Hector Pieterson Memorial during celebrations to mark the 34th annual Youth Day in Soweto, June 16, 2010, which commemorates riots against the educational system of the apartheid regime in South Africa. REUTERS/Thomas Mukoya (SOUTH AFRICA - Tags: ANNIVERSARY SOCIETY)

Youth Day politicking is in full swing but parties will struggle to win over young voters ahead of the 2019 elections, many of them bitter about democracy's failed promises and cautious of parties focused on internal squabbles.

Ahead of Youth Day on Saturday, DA leader Mmusi Maimane visited the Hector Pieterson Memorial in Soweto on Friday, beginning a weekend that will see political parties try to lure young voters ahead of the 2019 elections.

Maimane called on the youth to follow the 16 June 1976 generation by making their voices heard, but at the polls rather than on the streets.

“This government has proven, over two decades, that it neither can nor wants to improve the prospects of its young people. And so it falls to each and every young South African to learn from the class of 76 and take matters into their own hands,” said the DA leader, listing challenges such as poor quality education and unemployment

According to 2017 figures, almost 25-million South Africans are aged between 15 and 34 and their votes will be crucial in determining the outcome of the 2019 election, which according to many observers is likely to be the tightest race since 1994. With high levels of mistrust, garnering those votes won’t be easy.

Ahead of the Youth Day Commemoration at Orlando Stadium on Saturday, President Cyril Ramaphosa also called on the youth in a statement on Friday to keep the legacy of the 1976 generation alive.

“Young people should join the ranks of active and responsible citizens by participating in democratic structures and processes like elections as well as be active leaders in the fight against crime, substance abuse, corruption and acts of violence,” said Ramaphosa.

Many young people, however, feel despondent about mainstream politics and do not see voting as their best option to achieve change.

“To a large extent I do feel that the youth do feel betrayed by the older generation and they’re demanding youthful leadership,” said political analyst Professor Somadoda Fikeni on Friday ahead of a Youth Day engagement on Saturday.

Young people feel betrayed, Fikeni said, by the Convention for a Democratic SA (Codesa), by globalisation, by the greedy rich, by government, by corruption, by the education and health systems. Young women feel betrayed by violent men.

“Even though some might say there are positive things, they are becoming increasingly cynical somewhat,” he said. During his engagement with young people over the weekend he plans to rally their sense of personal agency and ask what must rise in the age of Fallist movements.

Most political parties are preoccupied with internal problems preventing their ability to energise support bases and appeal to the youth, said Fikeni. He said the most disaffected black youth will probably stick with the EFF, while some may buy into Ramaphosa’s “new dawn”.

Young DA voters might stick with the party, despite its handling of race issues, he said. But in the main, most parties have failed to provide clear policy positions and the youth are likely to see internal squabbles as a reason to stay away from the polls.

A 2016 study, Do you want my vote? Understanding the factors that influence voting among young South Africans, used interviews and focus-group discussions to assess youth perceptions of politics and explain why they participate in elections or not.

Continuing her research, Tracey-Temba has been interviewing young people in Gauteng townships and has made similar findings.

“We are getting that sense that these young people are not entirely convinced that going out and voting will bring change, they’re more veering towards the side of taking part in demonstrations or protest,” she said on Friday.

Youths have raised unemployment and corruption as key concerns in Tracey-Temba’s recent research while there are some education issues that haven’t been raised as much, with perceptions improving somewhat after the #FeesMustFall protests.

“We do see a sense that there is optimism in this new leadership in Cyril Ramaphosa and the ANC,” she said. It’s unclear however whether that will translate into an increased number of young people going to the polls or voting for the ANC.

“Political leaders themselves need to speak to the issues of young people, issues that young people are concerned about and that needs to be meaningful engagement,” she said. Young people believe politicians only speak to them ahead of elections. “They almost feel they are being used by political parties for their benefit.”

“What we are picking up in this research study is that mainstream political parties have lost touch with young people,” she added.

“Young people are now more savvy about political parties and are still quite cynical. In the lead up to 2019, political parties will need to convince the millions of unemployed youth that they are worth backing in 2019 and that will not be an easy task.”

Getting the youth to vote is always a considerable task and the IEC will spend considerable resources in registering the demographic ahead of the 2019 elections. According to its latest figures, over 12-million South Africans between the ages of 18 and 39 are registered to vote. Almost 5.3-million are between 20 and 29, but only 227,530 registered voters are between 18 and 19. In 2014, only 33% of eligible voters in the 18 to 19-year-old age group registered.

Launching Youth Month, Minister in the Presidency for Planning Monitoring and Evaluation Nkosazana Dlamini Zuma noted the low youth voter turn-out and apparent low levels of interest in politics. “Young people should participate in the democratic processes, for example the hearings that are taking place in Parliament such as the issue of land expropriation without compensation,” she said.

Considering the hopeless futures many young people face, it’s not surprising some are despondent. The South African Federation of Trade Unions (Saftu) asked on Friday what today’s youth have to celebrate ahead of the anniversary of the 1976 uprisings.

“The political freedom which was achieved in 1994 has not led to economic freedom, and millions of young people still suffer from the same problems as those in 1976,” said Saftu spokesperson Patrick Craven.

“They are still left with an economic crisis, huge levels of unemployment and poverty, a dysfunctional education system and communities that are terrorised by criminal gangs and drug lords.”

President Ramaphosa will retrace the steps of the 1976 youth on Saturday in a walk from Morris Isaacson High School to the Hector Pieterson Memorial before he speaks at Orlando Stadium.

Maimane will speak at the University of Fort Hare in Eastern Cape while EFF leader Julius Malema will speak at a rally in Klerksdorp, North West. DM