Councillor’s office set ablaze by people whose shacks were demolished 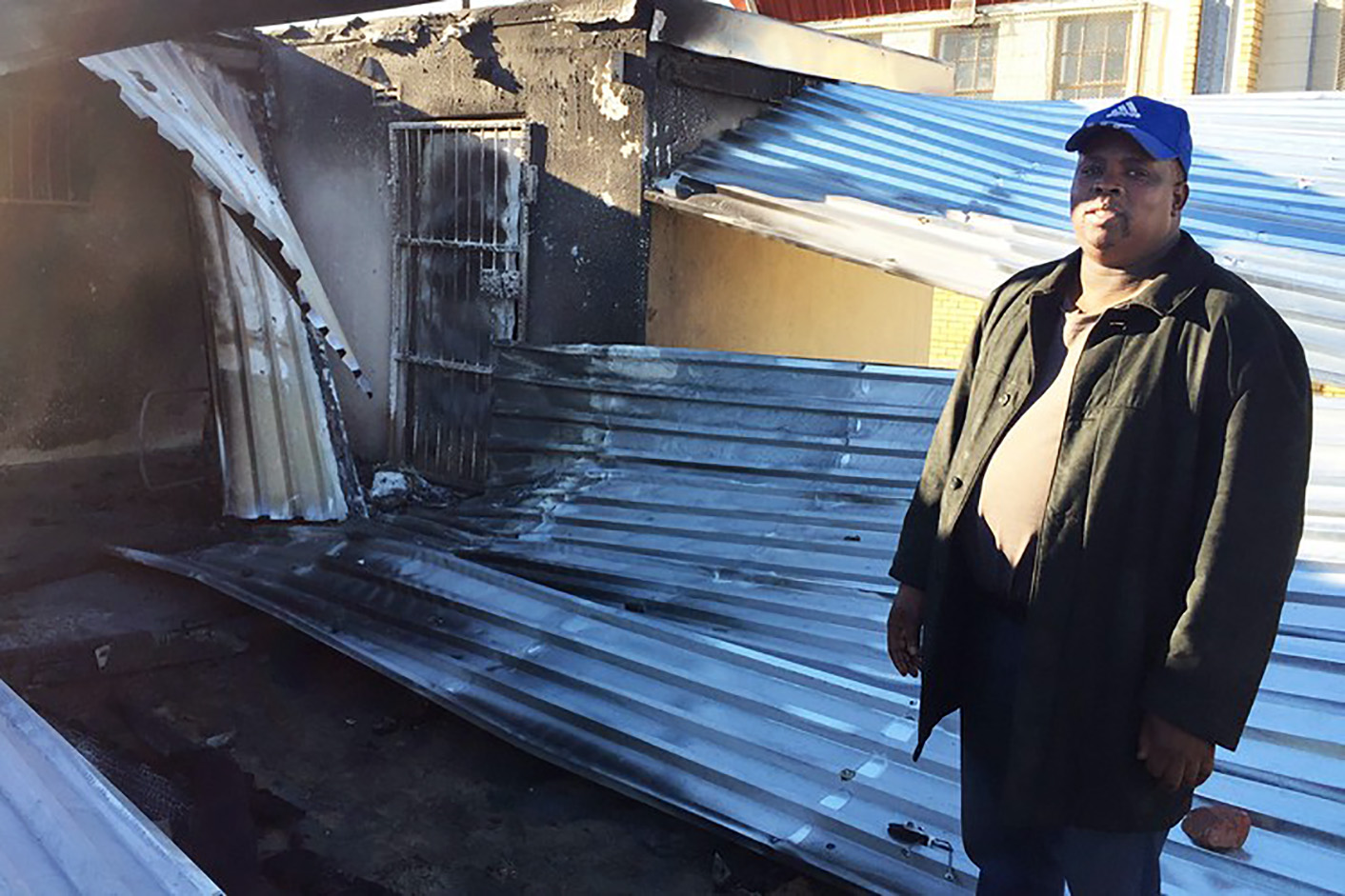 Violence is the language the government understands, says land occupier.

On the premises of a municipal hall in Dunoon stands the charred structure of a local ward councillor’s office building. Inside are burnt-out computers, printers, and filing cabinets. The office’s corrugated iron roof has partially collapsed. The place was burnt down by scores of residents, who vented their anger after their shacks were demolished.

Near the hall, construction of a multi-million rand library is nearly complete. But the protesters did not spare it. They hurled stones, cracking a large window panel on the second floor.

They hurled stones at the ward councillor’s home, smashing windows panes. They threatened his wife and children with death.

Also, a goods truck was set ablaze on the N7 on Sunday night, Richard Bosman, the city’s executive director for safety and security confirmed. The community hall was also slightly damaged.

The protest took place on Sunday afternoon. Police and the City of Cape Town’s Law Enforcement fired rubber bullets to disperse the crowd who were baying for the blood of the ward councillor.

The protesters’ anger was sparked by the City Anti Land Invasion Unit (ALIU) which on Friday and Saturday demolished shacks erected on vacant municipal land between Potsdam Road, Malibongwe Drive and the N7.

On 20 May the city announced that it had purchased vacant land on the other side of the N7 highway. There it intends to build low-cost housing. It will also spend R42-million upgrading the Dunoon taxi rank.

The announcement was made at the height of land occupations when residents attempted to settle on several pockets of vacant land in the Dunoon area, including the municipal sports field at the end of May.

Ward councillor Lubabalo Makeleni (ANC) called a public meeting on Sunday to update residents on the city’s housing plan for Dunoon. He advertised the meeting on a Dunoon community social networking site on Sunday morning. The meeting was supposed to take place at 3pm.

But he never got to address the residents. While he was in the hall with community leaders, some residents whose shacks had been demolished torched his offices.

They demanded that he come out of the hall, accusing him of calling the ALIU.

Sinethemba Matomela, who was with Makeleni at the time, said he came out of the hall to hear what was happening. The crowd told him they were not looking for him but the ward councillor.

For safety, Matomela said Makeleni was advised not to leave the hall. They called the police who dispersed the residents, who had already burnt down Makeleni’s offices.

“They demanded that the ward councillor give them land to rebuild their shacks and that he immediately return their shack materials confiscated by the ALIU after demolishing their shacks,” said Matomela.

He said the residents would not even listen to their street committee leaders who instructed them not to engage in violence.

Makeleni said he lost everything in his office including laptop computers bought by the city, a public address system and other things.

“It’s scary when people come to burn your house, threaten your children and destroy property,” he said.

Xanthea Limberg, Mayco Member for Informal Settlements, said that the city would act to protect city-owned land from illegal occupation. “The city strongly condemns the destruction of property. These protesters placed the lives of staff at risk with their actions, as several were still inside the building when it was torched. Furthermore, money which could otherwise have been used to better the lives of residents will need to be spent replacing damaged property,” she said.

The Milnerton Police confirmed that it used rubber bullets to disperse the protesters.

Nqaba Mpe was renting space in New Rest informal settlement for R650 a month including electricity. Unable to afford the rent any more, like many others, he decided to erect a shack on vacant space between Potsdam Road, Malibongwe Drive and the N7.

He said he erected his shack on 2 June and had lived in it for over a week when the ALIU arrived on Friday. They found him sleeping in it so it was spared. He says he spent R8,000 building it.

Mfundisi Tsangani was not so lucky. His shack, which he says he spent R3,500 building, was demolished in his presence. He was outside when the ALIU team arrived and they razed it to the ground and took his materials.

“I am frustrated. I was renting in New Rest informal settlement, paying R800 including electricity per month. I’ll work hard again to raise money to buy materials to rebuild my shack,” he said.

Asked if vandalising infrastructure was the only means to protest, Tsangani said: “Our government understands when there is violence. When we engage in violent acts they respond to our grievances. When we ask nicely they don’t. Violence is the language they understand. They just don’t listen. When it’s time to vote they come with promises and disappear once they have been elected.” DM