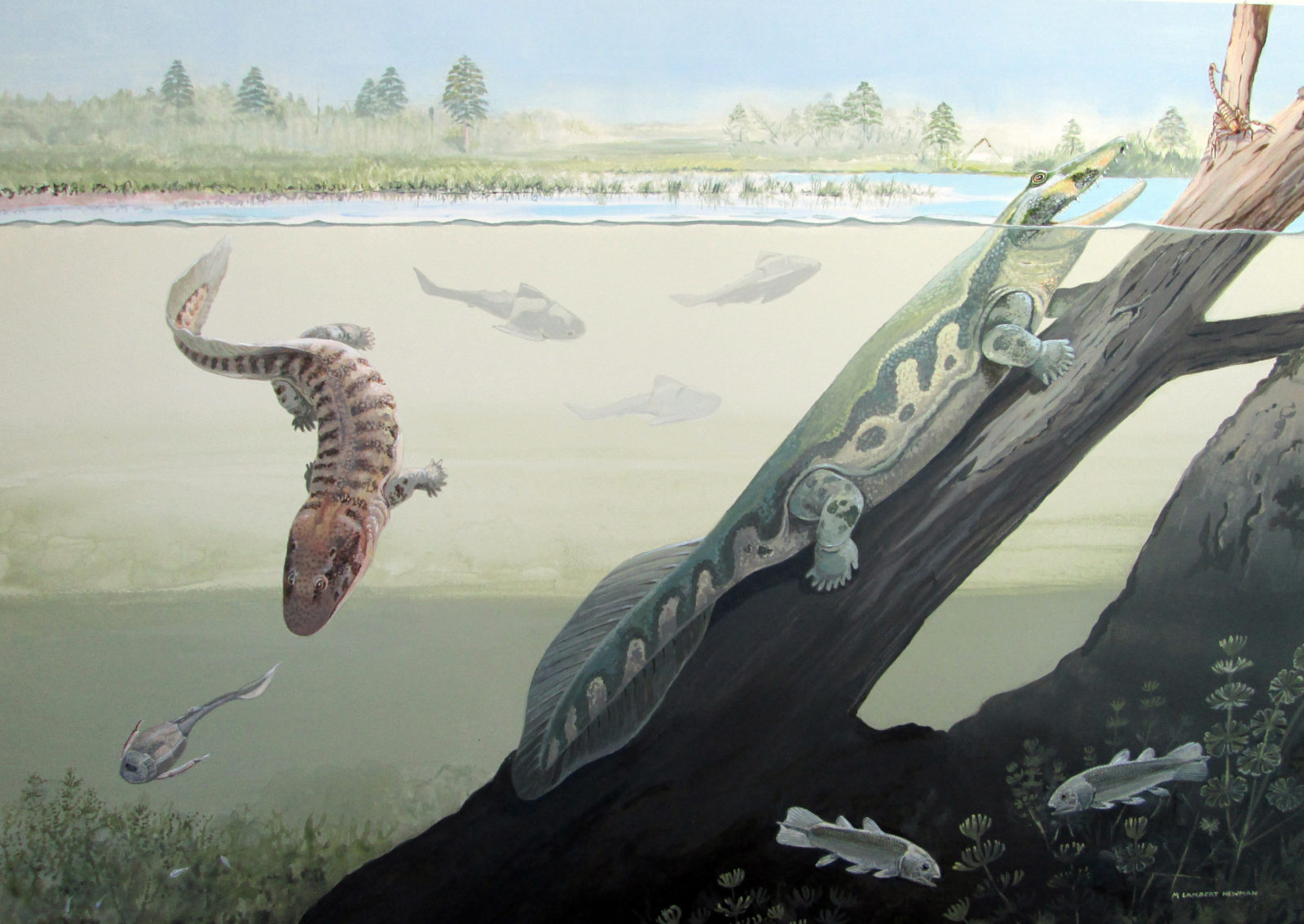 Full reconstruction of Waterloo Farm by Maggie Newman. Tutusius umlambo, rests on a tree limb, while its close relative Umzantsia amazana swims nearby. Both these early Tetrapods were possibly the first animals to step out of the water and head on to land. Credit: Wits University

Today, 8 June, two 360-million-year-old tetrapod species are to be revealed. They are Tutusius umlambo, which was named in honour of Archbishop Emeritus Desmond Tutu, and Umzantsia amazana. Both are now Africa’s earliest known four-legged vertebrates by 70-million years.

About 360-million years ago a distant ancestor did something that would change the way we live in the world forever – it left the water’s edge and stepped on to land.

Scientists refer to this moment in deep history as terrestrialisation, and it is a mystery as to what drove these early pioneering animals to venture ashore.

But this could soon change with the discovery of two 360-million-year-old tetrapod species that were found in shale taken from a road cutting near Grahamstown in the Eastern Cape.

Today the two species are to be revealed at Wits University.

Also today, an article written by Dr Robert Gess of the Albany Museum in Grahamstown, and co-authored by Professor Per Ahlberg of Uppsala University in Sweden will appear in the journal Science.

Tutusius, believes Gess, was probably about a metre in length, had a crocodile-like head, short legs and a broad flat tail.

Umzantsia was smaller and probably led a more aquatic lifestyle. Both breathed air, from a pair of openings on the back of their heads, and fed on fish and small invertebrates.

“They were probably spending most of their time in shallow water and they were possibly going ashore to feed and maybe escape predators,” says Gess.

What they were escaping could have been a four-metre long predatory fish, that has also been found in the fossil record of the same site. Gess suspects that the two tetrapod species would have made an ideal meal for this predator.

“They would have waddled around, with nothing to chase them,” says Gess.

For a long time scientists have been trying to work out what was it that triggered this move to land.

Devonian tetrapods are considered the first vertebrate animals to do so and a dozen species have previously been described from the fossil record.

Similar fossils have been found across the globe, but all from rocks deposited between 30 degrees north and south of the equator.

This would have been the palaeotropics and scientists believe this was where terrestrialisation first happened.

The theory was that something in these warmer climes set off these macroevolutionary events.

But the discovery of the two South African tetrapod species causes a problem with this theory.

Back 360-million years ago the two species would have lived in the southern end of Gondwana, a super-continent that included today’s Africa, South America, Australia, Antarctica and India.

In the Devonian, these tetrapods would have been living within the Antarctic circle.

It wouldn’t have been as cold as today – the fossil record shows that trees and plants grew alongside the lagoons. But it would have been cooler than the tropics, where the other tetrapod fossils have been found.

These southern tetrapods would have also have had the challenge of dealing with months of winter darkness.

The motivation behind that huge step might one day be revealed at the site where the two tetrapods were found.

The fossils were found at Waterloo farm, which lies about two kilometres from Grahamstown.

Gess has gathered 100 tons of shale from the road cutting that is now part of the N2, and which passes through the farm.

He has it stored in a shed in Bathurst, and is slowly working his way through it with a butter knife. There is still about 80% of it to go.

Gess has found a large number of new species in the rock.

The preservation is so good that Gess has even found the imprints left of soft flesh. There is a chance that he might one day find the imprint of a baby tetrapod, providing a true picture of how these animals looked.

It will also provide a snapshot of a direct distant ancestor.

“Why this is pertinent to us is that these are our ancestors, these creatures represent when we began to come ashore,” says Gess.

“Virtually every single bone in your body can be linked one to one with the bones in these creature’s bodies.” DM