A clause in a confidential settlement agreement that sought to insulate McKinsey & Co from having to clean up Trillian’s R600-million mess – on top of the R1-billion the company has to pay back – appears to be the main reason why negotiations between the global consulting firm, Eskom and the Asset Forfeiture Unit broke down at the 11th hour last month.

A neatly packaged deal that would have brought finality to McKinsey & Co’s R1-billion Eskom woes bombed on the steps of the Pretoria High Court when the Asset Forfeiture Unit suddenly pulled out.

Following weeks, if not months, of intense negotiations to facilitate McKinsey’s return of the fees it earned under a controversial contract with the state-owned power company and an arrangement involving the Gupta-linked Trillian Capital Partners, the parties are back to square one and now, with the additional hurdle of an application for a forfeiture order against the global company.

The unravelling of the deal appears to rest on a clause contained in the settlement agreement which some feared may absolve Trillian from being hounded for the money though others reckon, it was purely included to protect McKinsey from eventually being held liable for Trillian’s R600-million portion as well.

McKinsey agreed, subject to certain conditions, as far back as October to repay its portion, but Trillian had pretty much told the AFU and Eskom to get lost.

But, remarkably, without lifting a finger, the embattled Gupta-linked company crept into the final settlement agreement in a manner that set off alarm bells with team AFU.

Daily Maverick has had sight of a version of the contract and has confirmed that paragraph 8.1 of a settlement agreement, signed by both Eskom and McKinsey, was key among the reasons why the AFU pulled out and stormed off to court with an application for a forfeiture order just 24 hours later. 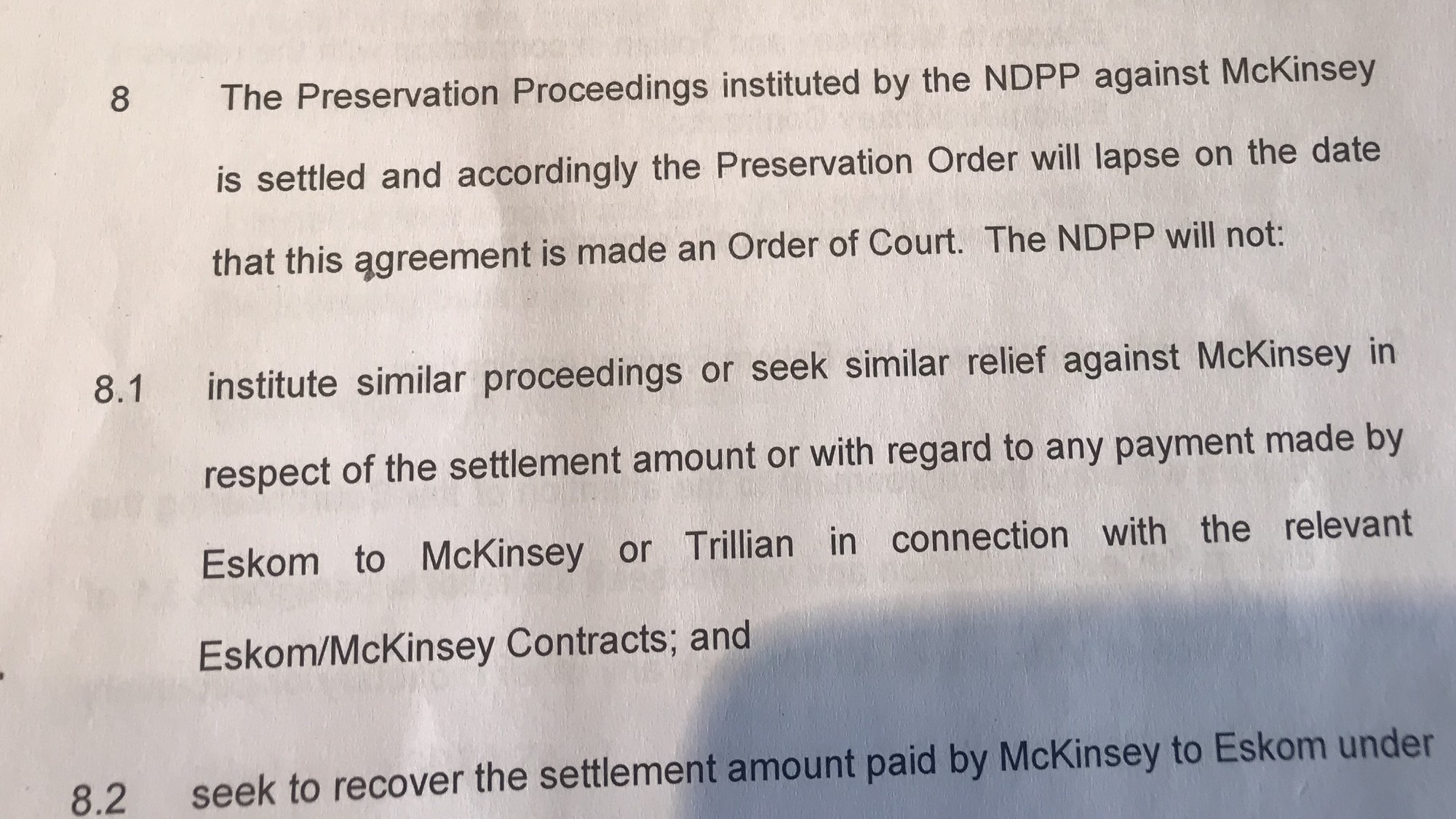 The agreement was scheduled to be made an order of court on 22 May and the terms would have had McKinsey pay up within seven days of that. Proceedings were blocked and the parties rushed off to an urgent meeting to try and resolve the impasse in the hope that it would go before court the following day.

However, that did not happen as the AFU then filed its application for a forfeiture order against McKinsey instead. It says this was done to avoid an earlier preservation order from lapsing on 24 May.

But Daily Maverick has been told that the AFU had concerns that the controversial clause may end up absolving the Gupta-linked Trillian as it came in the form of an undertaking by the National Director of Public Prosecutions not to institute further preservation order proceedings against McKinsey – and shockingly, Trillian.

Some of those party to the negotiations are adamant that the clause was not intent on shielding Trillian but rather to protect McKinsey against further legal proceedings by the NPA or Eskom for the money unlawfully paid to Trillian.

The agreement was designed to settle preservation proceedings by the NPA against McKinsey, allow for that order obtained in December 2017 to lapse on May 24 and then, it captured that the NDPP would not institute similar proceedings or seek similar relief against McKinsey in respect of the settlement amount or with regard to any payment made by Eskom to McKinsey or Trillian.

While the NPA would only confirm the lengthy negotiations, it said those were confidential and declined to respond to specific questions about why it pulled out.

McKinsey, in a short statement, said the company was intent on paying Eskom as soon as possible.

“We need a court endorsed process the public can have full confidence in. However, the AFU is taking some legal steps before it can sign up to an agreement. We expect this matter can be settled amicably, as the sole purpose of the AFU’s involvement was to assist the voluntary return of the fee to Eskom,” the statement by McKinsey read.

Eskom confirmed that it was an active participant in the negotiations and said the CEO had approved the final document that was scheduled to be made an order of court.

It said the matter did not proceed but that this was not at the instance of Eskom.

“Had the agreement been made an order of court on 22 May an amount of R902-million would already have been returned to Eskom by now.”

“The NPA will have to advise regarding the impasse it has recorded,” Eskom said in a written response to questions.

For now, Eskom is relying on a review application to set aside all administrative decisions that led to the payments to McKinsey and Trillian in order to recover the portion paid to the Gupta-linked company as well.

The parastatal did not respond to a question about how it intended to get its money back from a broke Trillian or whether it has opened a criminal case against anyone involved in the payment of the R595-million to the company.

Indications are that all parties are eager to get the settlement talks back on track. Daily Maverick has established that McKinsey is hoping to confirm by court order, among other things, settlement of the NPA’s preservation proceedings, a VAT discount of R105-million subject to an application and approval from SARS.

The full payment due by McKinsey stands at R902-million and it is understood that the company has already initiated steps to get this money into South Africa.

It remains curious why the NPA was so set on proceeding with its forfeiture application as the Trillian reference could potentially have been solved with a simple edit of the settlement agreement. After all, Trillian was never party to the negotiations and could not possibly have scored a get-out-of jail free card.

And, no agreement could possibly prevent the National Director of Public Prosecutions from exercising his statutory duty to go after anyone guilty of wrongdoing over the scandalous Eskom deal. DM