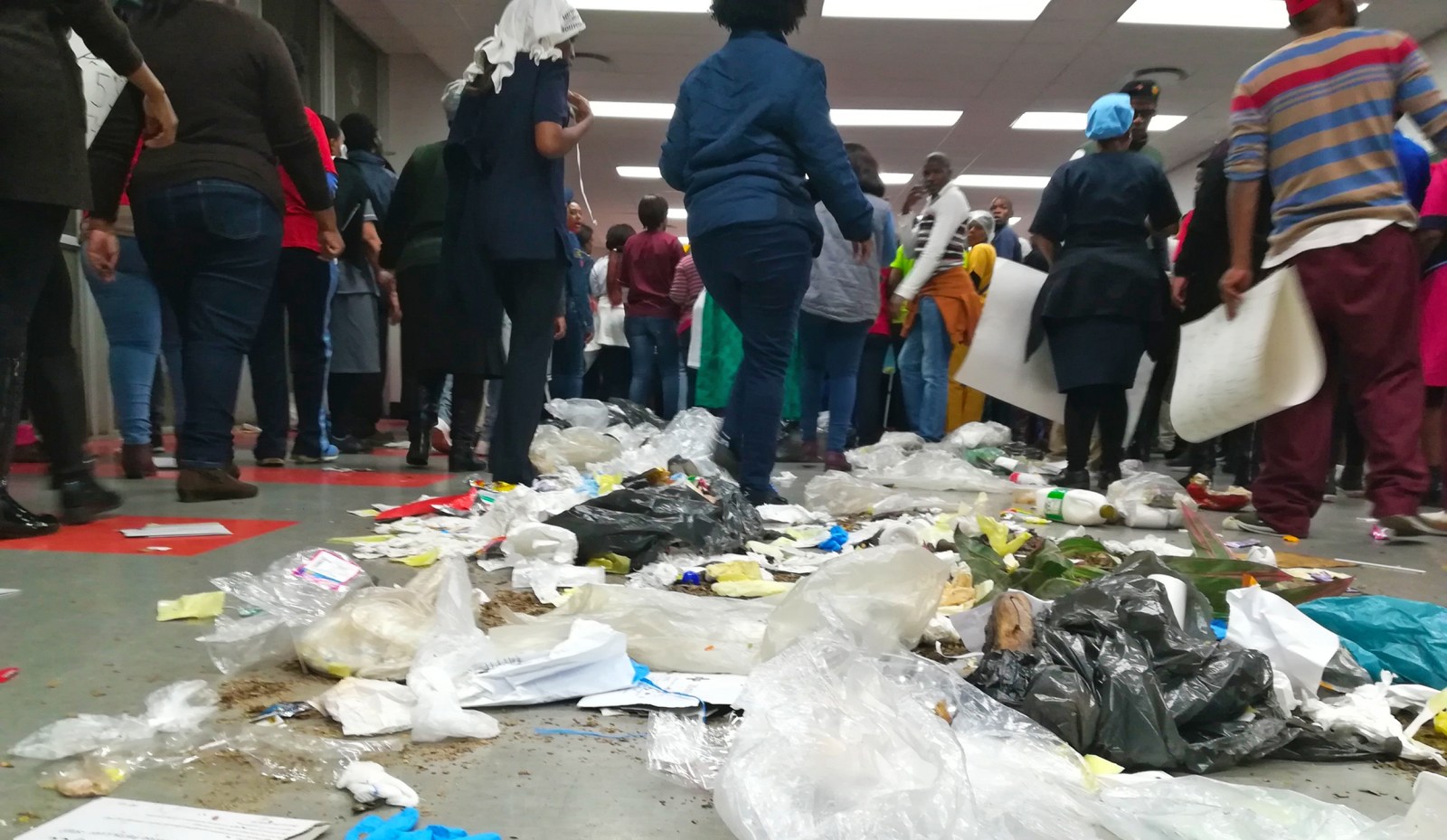 Staff at Charlotte Maxeke Hospital were intimidated and patients had to be locked inside for their safety.

“They have blocked gates and are burning tyres next to them. Lord help us all. This is so scary, more especially that patients are affected,” a healthworker messaged from a building at Charlotte Maxeke Johannesburg Academic Hospital on Thursday.

In the morning, hundreds of mostly National Education, Health and Allied Workers’ Union (Nehawu) members protested both inside and outside the hospital in Parktown.

The workers, mostly nurses, cleaners and porters, demanded that the Gauteng Department of Health pay their performance bonuses for the 2016/17 financial year.

A healthworker told GroundUp that the “whole hospital was trashed”. There were burning tyres and the protesters closed all the gates, she said.

Speaking anonymously, she said that protesters banged on doors and threatened workers who did not participate in the action. She and her colleagues locked themselves in a room but eventually managed to navigate their way to safety. She said patients had to be locked inside the Nuclear Medicine department for their safety. It was “really scary”, she said, and lasted for 45 minutes or more.

A doctor with a close relationship to the hospital informed GroundUp that in one ward patients could not get antibiotics, besides what was still in stock in the ward, because the pharmacy had to be closed.

Nehawu released a statement that indicated it had no control over the protests.

“Nehawu in the Gauteng province has been helplessly observing sporadic actions in different facilities of the Gauteng Department of Health … over the past three days,” the union said.

“These actions have led to the intimidation of staff and patients and compromised service delivery.”

Nehawu blamed the provincial health department for its “lacklustre response” to demands handed to it on 16 March. The union urged the department to pay the bonuses to avoid further disruption of services. It said the department should immediately engage with staff on the payment of bonuses for the 2017/18 financial year.

The Hospital Branch Manager for Nehawu, Thabiso Maphakula, said that the department had been stalling the payments since July 2017.

“They told us they don’t have money because of the Life Esidimeni saga but we have nothing to do with that. We come here and do our jobs every day so why should we suffer?” said Maphakula.

He said workers should receive performance bonuses every year but the department “always tampers with that money because they undermine us as workers”.

“In 2009, they didn’t give us even a cent. In 2012, they gave us half and said we would get our other half at a later stage but that never happened … so now we are saying enough is enough,” said Maphakula.

Maphakula said the protest would continue until a solution was found that the workers were satisfied with.

In a media briefing on Thursday evening, the Gauteng MEC for Health, Gwen Ramokgopa, admitted that there were no funds to pay workers’ bonuses last year.

But she said there was no justification for “trashing a hospital”.

Ramokgopa thanked healthworkers and doctors for “continuing to save lives” despite the disruptions. She said there will be a meeting on Friday that will discuss the issues that the workers have raised.

Minister of Health Aaron Motsoaledi said the hospital was supposed to complete 50 operations but could only perform 19 due to the disruptions. He said the protesters’ grievances were justified but he condemned the way they handled it.

“You don’t do this to sick people… this is not an act of labour, this is an act of pure hooliganism.” DM