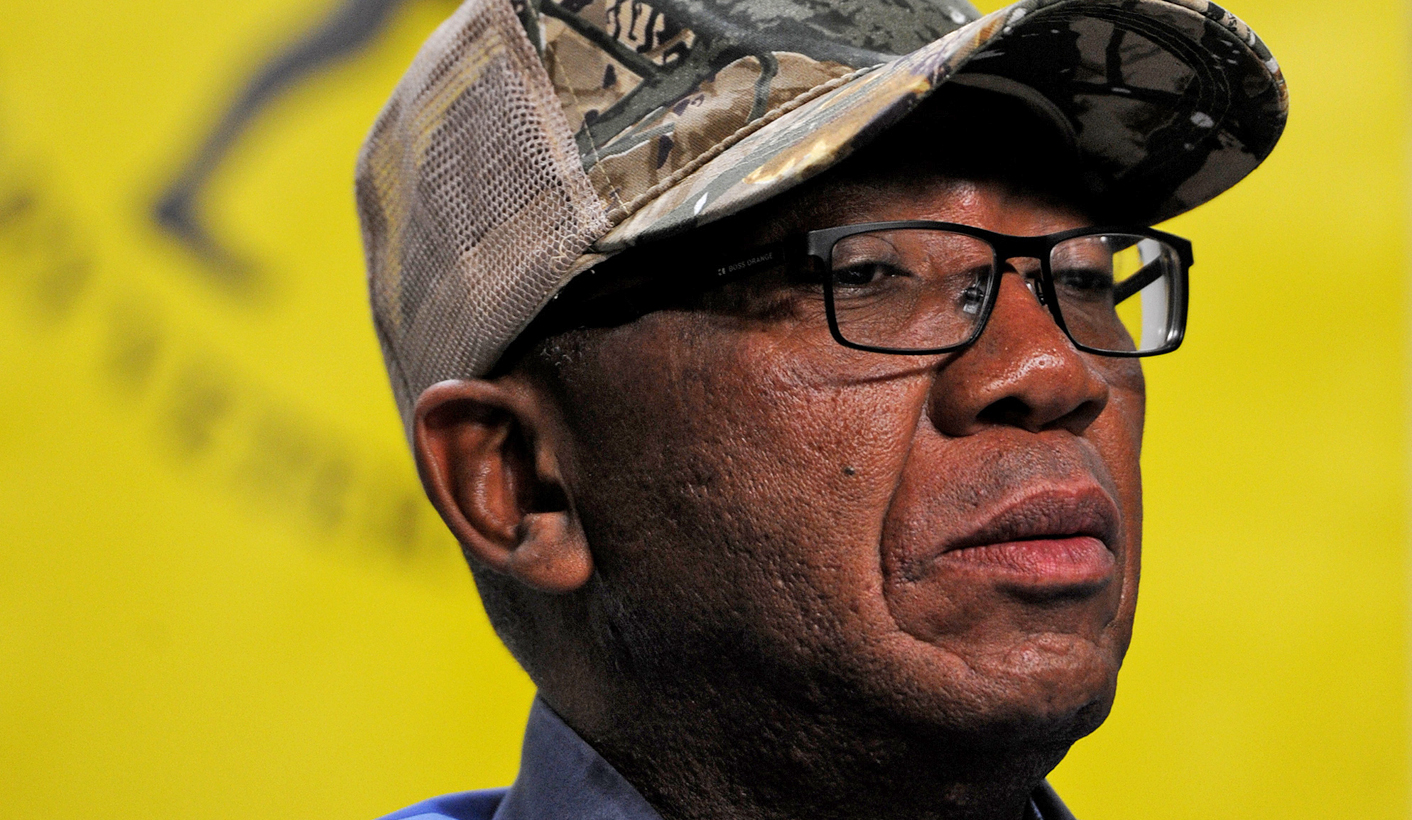 Umkhonto we Sizwe Military Veterans' Association chairman Kebby Maphatsoe is seen at a news conference in Johannesburg on Monday, 8 September 2014 where he was speaking about Public Protector Thuli Madonsela. Picture: Werner Beukes/SAPA

Umkhonto weSizwe Military Veterans Association leader Kebby Maphatsoe failed to administer a trust meant to benefit MK veterans, a court has ruled. For the former soldiers who took on the deputy minister, it confirms long-standing allegations of graft and incompetence.

Following long-standing allegations of graft and maladministration, the South Gauteng High Court on Monday ruled that Umkhonto weSizwe Military Veterans Association (MKMVA) President Kebby Maphatsoe must be removed from a trust established to benefit the organisation and former soldiers.

Maphatsoe, who is also the deputy minister of defence and military veterans, and three other former MKMVA leaders, failed to administer and manage the MK Veterans Trust SA and must be removed as trustees, said the court.

The trust was established in 1998, but only registered in 2009, to benefit the organisation and former MK soldiers. The court agreed that the trustees had failed to exercise their responsibilities, prejudicing the intended beneficiaries.

For the former soldiers who took the matter to court, the ruling is confirmation of a draft forensic investigation prepared by auditing firm SizweNtsalubaGobodo in 2011 that suggested the MKMVA leaders had raided the organisation’s coffers.

“There was extreme corruption, no law followed, and trust laws were not followed at all. They’re just using this trust as a cash cow,” said Omry Makgoale, one of the six MK veterans who took the matter to court.

“They’ve been using this money for their friends, their girlfriends and so on.

“Most of the MK comrades are dying homeless and destitute,” said Makgoale. “Most of the MK veterans have never seen that money, except for Kebby Maphatsoe and Dumisani Khoza.”

The court focused on the failure of the trustees to perform their administrative and fiduciary duties, but corruption allegations against the officials motivated the applicants to take the case forward.

The SizweNtsalubaGobodo report analysed two MKMVA accounts and found the trustees were paid lump sums of up to R50,000. They used the accounts to pay for jewellery and spa treatments. Companies linked to Khoza received millions.

The auditing firm never finalised its investigation and only looked at the flow of funds, not what the individuals may have been entitled to or paid back. But Monday’s court ruling confirmed that Mphatsoe and his comrades failed to properly administer the trust meant to benefit MKMVA and former combatants.

The applicants said the trust owned Mabutho Investment Holdings and MKMVA had a 10% stake in the company Nghala Mining. The trust is also a beneficiary shareholder in Matuba Holdings. Yet the trustees had provided no audited reports or distributed any income to MK beneficiaries. The trust didn’t even have a bank account.

Maphatsoe dismissed allegations of corruption and said the ruling was irrelevant to the MKMVA.

“It does not have an effect on us because that trust was opened long before we came into the [national executive committee],” he said.

He said the trust was dormant and never functional, which the applicants disputed, and the MKMVA had opened another trust that was being run professionally. The organisation’s last conference had resolved that leaders shouldn’t act as trustees, he said, and they had already planned on resigning from the MK Veterans Trust SA.

He said the SizweNtsalubaGobodo report was never an official investigation nor did it make binding findings. Nevertheless, it was discussed at the MKMVA’s conference and the matter was closed, said Maphatsoe.

The MKMVA leader said the trustees had tried without success to access its shares in Nghala Mining and he said the new trustees would see how hard they worked.

“The truth will come out,” said Maphatsoe.

He suggested the court action was a result of factionalism within MKMVA.

The Master of the Court will now appoint a trustee after consulting the interested parties and conduct an investigation into the trust’s administration. Maphatsoe, Khoza, Mathe and Motseki were ordered to pay the applicants’ court costs.

Hathorn said an inquiry will need to establish what assets obtained for the trust reached its bank accounts, what did not, and what has happened to those assets. Makgoale hoped some of the funds can now benefit MK soldiers.

Former MKMVA official and current Minister of Public Service and Administration Ayanda Dlodlo was mentioned in the SizweNtsalubaGobodo report for receiving R40,000 but not mentioned in this case. She has suggested the payment was a reimbursement for money she spent on an MKMVA anniversary celebration.

The MKMVA’s finances came under scrutiny last year when it was revealed the Gupta family paid R850,000 to cover its 2010 national general council and that the organisation was given shares in the Guptas’ companies.

Maphatsoe and the MKMVA vehemently defended former president Jacob Zuma and the Gupta family, casting doubt on those who levelled accusations of corruption against the family and the former president.

In 2016, Maphatsoe was ordered to pay former intelligence minister Ronnie Kasrils R500,000 after he made false and defamatory claims that Kasrils orchestrated the rape charge against Zuma by sending Fezekile Kuzwayo, “Khwezi”, to meet the then deputy president.

Maphatsoe was re-elected to lead MKMVA in 2017 at a conference his critics said was unconstitutional. He has survived as the organisation’s leader and deputy minister in the face of opposition from the MK Council as he launched attacks on ANC members who opposed Zuma and those who sought to challenge his leadership. DM