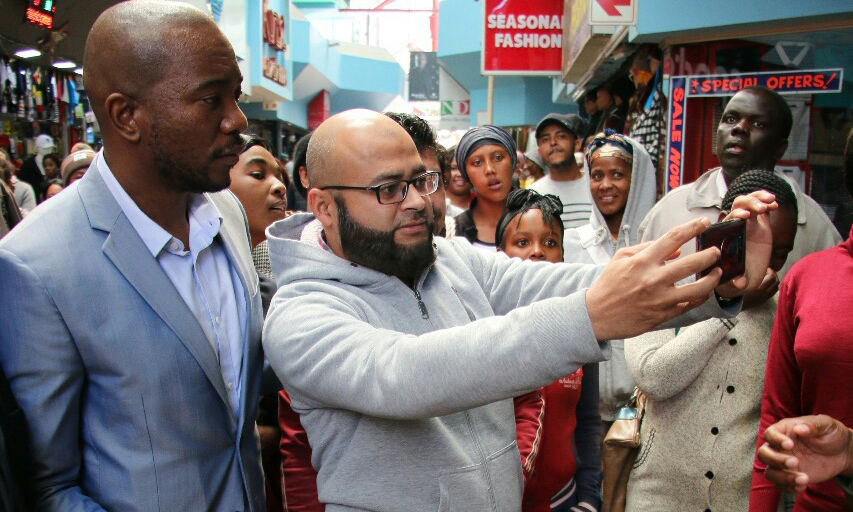 Mmusi Maimane believes Cyril Ramaphosa's youth jobs plan to create a million jobs in three years is a pipe-dream that would, at current rates take 50 years to achieve. He made the comments while visiting the closed Johannesburg Labour Centre.

The centre was designed to assist, according to Maimane, approximately 800,000 people to access services and to find work but has been shut down for three years now.

Wednesday’s visit to the labour centre was not the first made by the DA. Maimane said representatives from party visited the centre in January 2016 to do an oversight. However the centre was closed due to “health and safety” risks.

“While we were assured this was being addressed urgently, it’s been over two years since then and the doors of opportunity remain shut to work seekers,” said Maimane.

According to Maimane, President Cyril Ramaphosa and his government have failed when it came to helping South African youth get jobs and access the services that they need.

“The fact is that the President’s target of one-million jobs in three years through the YES (Youth Employment Services) will not be achieved, and it certainly will not be achieved using dysfunctional Labour Centres. If the performance of the current Labour Centres continues, it will take 50 years to achieve the one-million jobs target,” claims Maimane.

Maimane, using the opportunity to do a bit of electioneering, said his party had a better strategy to help South African youth get jobs. This, he said, involved the establishment of Kuphuka centres like the one operational in the City of Johannesburg. These centres are aimed at small to micro enterprises to assist them in providing work opportunities.

Maimane used answers to parliamentary questions that the DA had asked Minister of Labour, Mildred Oliphant, to drive home his point.

According to Oliphant’s answers, the number of work seekers that were successfully placed through the country’s 22 active labour centres was slashed in half from 40,000 in 2015/16 to 20,000 in the last year.

“At the rate of only 20,000 successful placements a year, it will take 50 years to place one million work seekers,” Maimane said.

Only half of 40 self-help desks that the department committed to having set up in labour centres by two months ago were actually installed, Oliphant disclosed in her replies.

Using the City of Johannesburg as an example, Maimane said where the DA led, employment increased.

According to Maimane, in Johannesburg employment has increased by a total of 91,000 jobs from the fourth quarter of 2017 to the first quarter of this year, since the DA-led administration took charge of the metro in 2016, and 11,034 Expanded Public Works Programme (EPWP) opportunities were created from the beginning of July 2017 to the end of March 2018.

“This means that one DA-led government in one Metro has outperformed all of the 22 labour centres across South Africa in getting unemployed people into work,” said Maimane.

Residents around Johannesburg were happy about Maimane’s visit to the labour centre.

Crimulda Swarts from Eldorado Park said: “I feel that Mmusi Maimane is doing the right thing, because he cares about the young people of the country. I mean how are young people supposed to get jobs when such centres are closed?”

According to Swarts, if one goes to Eldorado Park, teenagers end up sitting on street corners and taking drugs when they finish school due to the lack of jobs.

“This building is supposed to provide our children with jobs but instead the rats are eating the building. I am very happy about what is happening today,” said Swarts.

She also believes Ramaphosa is not achieving anything with his YES initiative because a lot of people are still not getting jobs.

Lebogang Senolodi, 23, from Tembisa took Maimane’s visit to the centre as a sign of hope.

“I really wish people could see how parties like the DA and the EFF put the needs of the community first. I appreciate Maimane for taking his time to come visit the centre and I hope he will help people like me get jobs,” said Senolodi.

According to Senolodi he could not further his studies due to a lack of finances and since leaving high school four years back it has been very difficult for him to find a job.

“The ANC should really start thinking more about us as the youth unemployment rate continues be stubbornly high, while more and more ANC officials continue to be selfish by stealing from taxpayers,” said Senolodi.

South Africa’s current unemployment rate stood at 26.7% in the first quarter of 2018, unchanged from the previous period.

Comment from the Labour Department was being sought at the time of publishing. DM