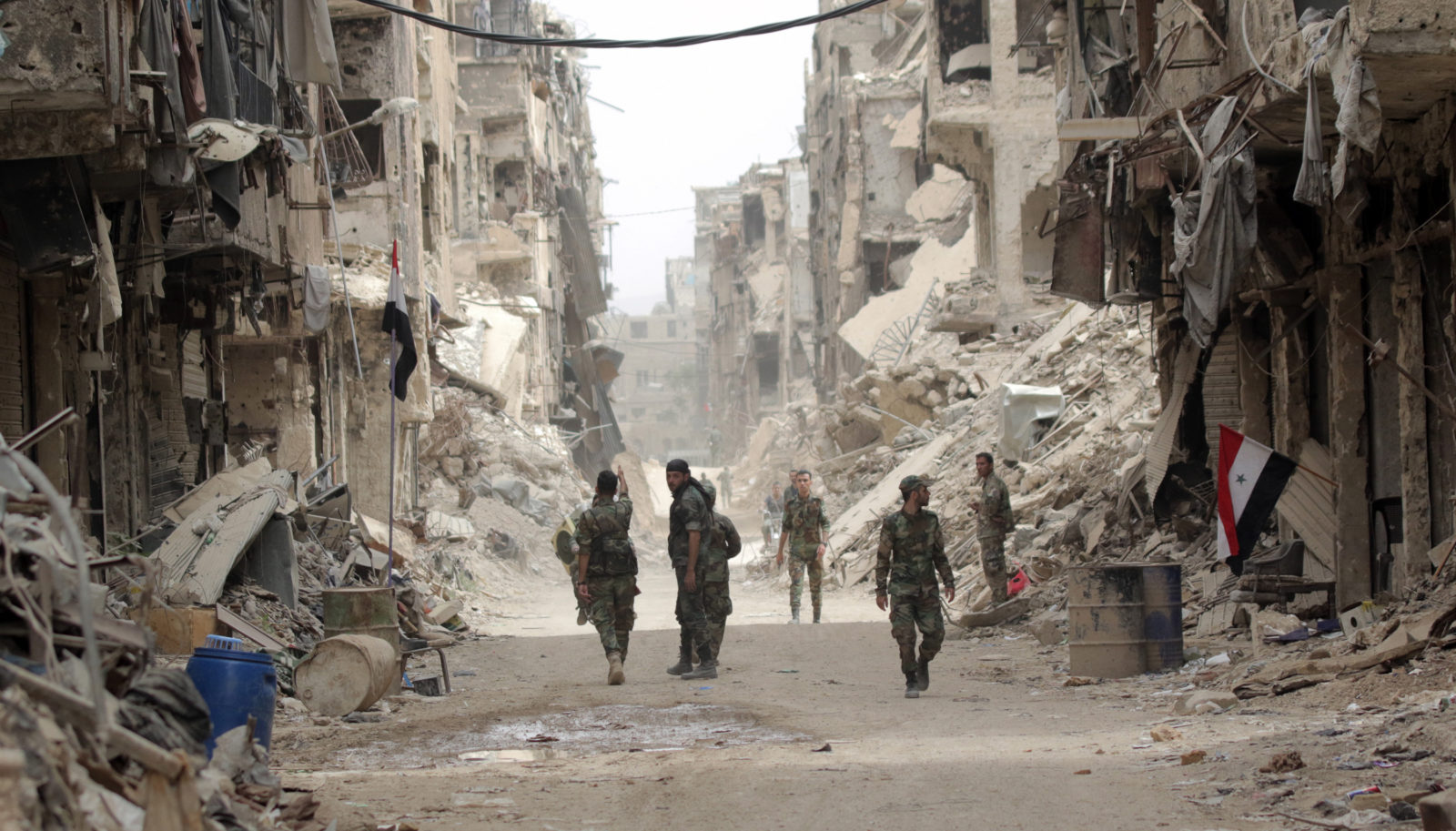 Berlin hopes that Germany and South Africa can tackle African conflicts together – but also eradicate chemical weapons from Syria.

Germany hopes to work closely with South Africa on the United Nations Security Council – especially to try to resolve conflicts and maintain peace in Africa – if both are elected next week onto the world’s most powerful body for maintaining global peace and security, which is almost certain to happen.

But Berlin has also urged Pretoria to support Germany in eradicating chemical weapons from Syria where both the government and ISIS militant extremist rebels have been found by the UN to have used them against civilians in the seven-year-long civil war.

The German government would like South Africa to stop abstaining from resolutions – in both the UN and the Organisation for the Prohibition of Chemical Weapons (OPCW) – which aim to end the use of chemical weapons in Syria.

The UN General Assembly in New York will vote on 6 June on which countries should occupy the five non-permanent, two-year seats on the Security Council which will become vacant on 1 January, 2019.

South Africa has already been officially endorsed by the African Union for the one African seat that must be filled and so is almost certain to be elected. Likewise, Germany and Belgium are the only two candidates still contesting the two seats available for their group and so are virtual certainties for election.

Patricia Flor, the German Foreign Office’s Director-General for International Order, the United Nations and Arms Control, was in South Africa recently to explore areas of possible co-operation with South Africa on the Security Council in 2019 and 2020.

Working with South Africa on conflict resolution and peacekeeping in Africa would feature strongly, Flor made clear when she met South African diplomats in Pretoria. Bolstering UN peacekeeping was especially important when the world’s most powerful nation, the United States, is cutting its financial contributions to UN peacekeeping operations and generally distancing itself from the UN, she said.

For Germany, the UN remained “the pillar of international order”. And so Germany has also been campaigning for many years for a permanent seat on the Council.

Germany wanted a bigger say in the running of the UN because it was the fourth largest contributor to the UN’s regular budget and probably the second overall if one added its voluntary contributions to UN agencies like Unicef, UNHCR, OCHA, WFP and WHO.

“And we’ve also stepped up our engagement in UN peacekeeping over the last years. We have a large stake in the UN.”

Flor said many other governments had told her they were looking to Germany to provide leadership on the UN Security Council, especially when the US under President Donald Trump was no longer championing international norms.

“Because of Germany’s role, for instance in the refugee crisis of 2015, Germany’s engagement was widely recognised,” she added.

Germany also hoped to contribute to the big current debate at the UN on the efficiency and reform of peacekeeping.

“The US insists very strongly on cutting down on the costs of peacekeeping. Now of course, being a large contributor, we agree with being cost-efficient.”

But she said Germany’s yardstick would be not cost alone but whether or not a particular peacekeeping operation was “fit for purpose”, whether it could fulfil its mandate.

The peacekeeping operation in Mali, for instance, had to have the resources to protect civilians, to help implement the Algiers peace deal and to be able to protect the peacekeepers themselves.

Flor said Germany would also continue to provide training and logistical support to peacekeepers from other countries.

Peacekeeping was only part of the conflict cycle, though, and Germany would also try to revive the efforts to establish a mechanism in the Security Council to sound early warnings of looming conflicts.

Germany would also try to get the Security Council to establish a mechanism for transitioning from peacekeeping missions to post-conflict peacebuilding operations, such as in Darfur, Sudan, where the peacekeeping force Unamid was no longer required.

“It’s much more a policing and public order job, assisting in capacity building and so forth. But we have no model about how we exit from a peacekeeping operation and transit into another UN operation which is then run by other agencies.”

That other operation would aim to sustain peace, to prevent a return to war, using elements other than peacekeeping forces.

Germany would emphasise prevention of conflicts, she said, as had UN Secretary-General Antonio Guterres.

Germany would also try to get the Security Council to look more broadly at the council’s international security mandate, including, for example, the impacts of climate change, migration and human rights violations on security.

Berlin would also continue to push the women, peace and security agenda outlined in UN Security Council Resolution 1,325 of 2000 which aims to protect women and girls from sexual violence and other abuses in conflicts and boost women’s participation in peace negotiations.

Germany hoped to work with South Africa on a follow-up resolution to 1,325 and also on curbing climate change.

Collaboration with South Africa was important because of the strong role of South Africa in African conflict resolution, especially strengthening the African Union’s capacity for resolving conflict.

But could ideological differences prevent full co-operation between the two countries on issues such as human rights violations in Syria, Venezuela and some African countries?

On Syria, particularly, Pretoria has consistently withheld its support in international bodies from any resolutions condemning the Syrian government of President Bashar al-Assad.

Flor said the Syrian conflict was of direct and immediate concern to Germany because of its devastating humanitarian consequences. Germany felt the impact of the war through large refugee flows and through its efforts to help Syria’s neighbours, Lebanon and Jordan, to cope with Syrian refugees in their countries.

She deplored the UN Security Council’s failure to find a political solution to the Syrian crisis because of the divisions among the five veto-wielding permanent members, the US, Russia, China, France and UK.

Germany was also very concerned about the international community’s failure to stop the use of chemical weapons in Syria. She noted that the joint investigation mechanism by the Security Council and the OPCW had clearly established that the Syrian regime had carried out some chemical attacks, and ISIS others.

The joint mechanism had also established that both chlorine gas and sarin had been used. Sarin, in particular, was a chemical weapons agent, all of which should have been destroyed in Syria after it acceded to the Chemical Weapons Convention in 2013.

“So we also have concerns about overall compliance of the Syrian regime with the declaration they made after accession. Chemical weapons, it’s about a weapon of mass destruction which should not be used anywhere on this planet by anyone.

“And very often in these situations we see that other countries abstain. In the OPCW executive council, for instance, you need a two thirds majority. And so if you have abstentions, it’s not neutral. It sounds neutral but at the end of the day it’s not because it actually prevents that any action can be taken. So therefore I will appeal also to South African partners, colleagues, to really take another serious look at this issue,” she said.

South Africa is currently one of the 41 members of the OPCW executive council.

Flor urged South Africa and other countries which abstained from such resolutions to separate the chemical weapons issue from other issues. “Realpolitik” might sometimes dictate solidarity with allies, she conceded.

“But weapons of mass destruction and the chemical weapons issue, can we not say that at least on this issue, be united?

“You can have a terrorist attack with a chemical agent. We have seen one in Great Britain, we have seen one in Malaysia. It’s not restricted to Syria. ISIS is certainly infiltrating elsewhere. So to stand together on this I think is really important. So this is one of the more difficult areas. But I think we need to have an open discussion about this.”

On another crucial disarmament crisis, Flor said Germany and the other European signatories to the deal for Iran to stop its nuclear weapons programme in exchange for the lifting of Western sanctions would continue to work to preserve it, despite US President Donald Trump’s recent withdrawal from the agreement.

On African conflicts, Flor indicated that Germany largely deferred “to the principle of African solutions for African problems”.

“At the end of the day Africans know what’s best for them and how they should go about it.”

In Burundi, for example, where President Pierre Nkurunziza, who came to power in 2005, has just held a referendum to change the constitution to allow himself to remain in power until 2034, South Africa had a key role to play.

“It can be a quiet process behind the scenes. It’s not about public appearances, but an attempt to defuse a conflict where all the ingredients are certainly present for violence with some ethnic connotations, making it extremely dangerous.”

Burundi’s Arusha Agreement ended long years of bloodshed with an elaborate set of checks and balances between the ethnic groups and institutions. That includes presidential term limits. Yet the recent changes to the constitution had abolished many of the checks and balances, Flor said. The process leading up to the referendum had not been inclusive. International mediation – especially from regional organisations – had not been accepted.

“Germany regrets that. This was also a case in point for early warning and taking a preventive approach.”

If armed conflict erupted, the UN Security Council would one day be asked; “have you lived up to your responsibilities in terms of peace and security?” she warned.

Flor also confirmed that Germany and its partners in the long-standing “G4” group (India, Brazil and Japan) were still lobbying energetically for permanent seats on a reformed UN Security Council. The G4 is prepared to voluntarily forgo the use of veto powers which the current five permanent powers wield, until after a future review, in order to first tackle Security Council reform itself.

South Africa has also in the past declared its wish for a permanent seat, though it has been tied by the “Ezulwini Consensus”, the AU position which includes a demand for two permanent seats for Africa – with full veto powers.

Some observers think it would boost the chances of reform if South Africa broke with the AU and joined the G4 to form a G5 that also did not demand the veto.

Flor suggested that having a strong African country like South Africa in the coalition would be good but that African solidarity was key to any reform process.

Yet she also suggested it might be useful for the AU to re-strategise on the best way to win Security Council reform, especially at a time when reform efforts at the UN were intensifying.

“To be realistic: A proposition that brings the number of veto powers from five to 10 would never win the two-thirds majority in the UN General Assembly needed to expand the Security Council.”

At its conference in December 2017 the ANC also instructed the government to review the Ezulwini Consensus because it said in 10 years there had been “little or no progress” in realising it. DM