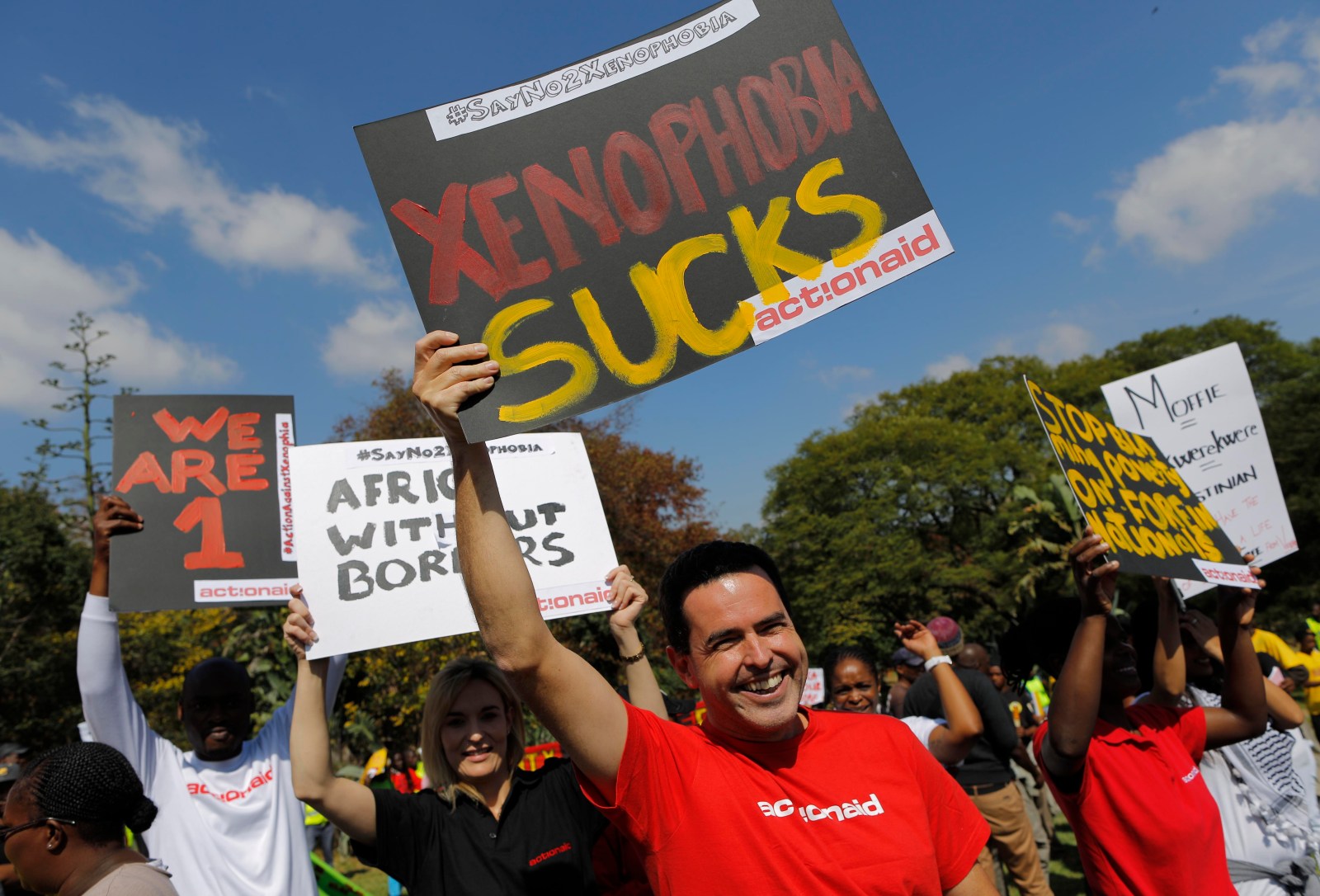 File Photo: Some of the thousands of people are seen carrying anti xenophobia posters during a mass march calling for an end to attacks against foreign nationals, in Johannesburg, South Africa, 23 April 2015. Photo: EPA/KIM LUDBROOK

We need to reflect more as we embrace Africa Month as to why and how xenophobia is fuelled in our country. The sad reality is that inflammatory comments by those in positions of power, both politically and socially, have incited division and violence. This is accompanied by the enforcement of policies that seek to almost “criminalise” migrants and asylum seekers in South Africa.

The xenophobic violence and the bloodshed of May 2008 remains a scar which should be carried with shame by every South African and our government.

It is concerning that as we mark Africa Month, progressive forces from communities in KwaMashu in KwaZulu-Natal are once again uniting in solidarity to counter xenophobia. A structure called the North Region Business Association (NRBA), is reported to have sent out letters instructing foreign-owned shops in the Inanda, Ntuzuma and KwaMashu (INK) areas to close down. The claim is allegedly that shops owned by people who are not South African have not been registered.

We should not be targeting communities simply because they are Ethiopian, Somalian, Zimbabwean, Pakistani or Bangladeshi. If the issue is registration of shops, then the structure needs to work with local or provincial government to ensure that there is an effective system to enable all businesses to register.

Communities need to be uniting and mobilising forces in our struggle against unemployment. Owners of tuckshops should join organisations like StreetNet. We need to be organising ourselves in our communities. Unity will strengthen us. Our history is one of communities mobilising and uniting under the slogans of social justice for all, to eradicate poverty and inequality. This is what we as South Africans should be embracing. It is a tradition we should be proud of. It was these struggles that resulted in the demise of white minority rule.

Writing in the May 2017 edition of Amandla, Pat Horn writes about new forms of self-organisation by workers in the informal economy. We should not be targeting fellow human beings – irrespective of where they come from, foreign nationals or not. The so called “informal sector” is a euphemism for the struggle for human dignity. Work is integral to human dignity.

But we need to reflect more as we embrace Africa Month as to why and how xenophobia is fuelled in our country. The sad reality is that inflammatory comments by those in positions of power, both politically and socially, have incited division and violence. This is accompanied by the enforcement of policies that seek to almost ‘criminalise’ migrants and asylum seekers in South Africa.

Chapter 9 institutions and the South African Human Rights Commission in particular have struggled to hold public figures to account for such behaviour, which continues to take place with impunity. There appears to be a direct correlation between the inflammatory statements by senior public figures and the increased levels of xenophobic violence in South Africa over the last two decades.

KwaZulu-Natal is infamous for the comments made by King Goodwill Zwelithini in 2015, which were found to be “hurtful and harmful” to foreigners. In Johannesburg, Mayor Herman Mashaba exposes a certain prejudice when he speaks about undocumented foreign nationals living hijacked buildings and makes remarks referring to the “rot” of undocumented migrants.

In 2015, then Minister in the Presidency, Jeff Radebe said that foreigners own up to three times more spaza shops in some townships compared to South Africans. He was briefing the ad hoc committee that is investigating violence against foreign nationals on an inter- ministerial committee report on migration. Should we only be focusing on how many spaza shops are owned by foreign nationals, or should we be focusing our energies on empowering communities, building sustainable township economies for all and developing South African entrepreneurial skill?

The sentiments expressed in documents outlining South Africa’s foreign policy indicates that the country aims to “promote its national interest in a complex and fast-changing world” by achieving “a better life for its people both at home and in a regional and continental context”. If this is the case, then what is the meaning of the failed asylum system in our country? The asylum system is symptomatic of institutional xenophobia, which the Department of Home Affairs must take responsibility for.

We claim to be committed to achieving a better life for people in a regional and continental context. Yet, we have just to examine how the “Refugee Reception Offices” receive people coming to this country to see how far off the mark we really are.

But not all foreigners coming to South Africa are treated with contempt and disrespect for their human dignity. Some foreign nationals seem to be more equal than others. Nothing short of xenophobic behaviour may be meted out to you if you are a vulnerable migrant or asylum seeker fleeing violence or battling to survive. There is perhaps a different narrative if you come to SA and have the ability to “bear gifts”. Take for instance the Guptas, who have been welcomed and given permanent residence with an efficiency that is unprecedented.

The Department of Home Affairs must explain why thousands of ordinary migrants wait for up to 15 years and remain paralysed with nothing but a piece of paper that almost “criminalises” them, making it difficult to open bank accounts or access schools.

We also need to question if our law enforcement and immigration offices are indoctrinated to presume that all “foreign nationals” are simply criminals wanting to rig the system to get documented, and if so, who is it that is promoting this narrative.

The South African Constitution is one of the most progressive in the world. It was drawn up as a guarantee that no one should suffer the humiliation and pain of racism and prejudice. The Bill of Rights is a blueprint for the transformation of South Africa.

The Constitution’s preamble reads: “We, the people of South Africa, recognise the injustices of our past; honour those who suffered for justice and freedom in our land; respect those who have worked to build and develop our country; and believe that South Africa belongs to all who live in it, united in our diversity.”

Let this be our mantra as we live the letter of the Constitution and build solidarity to hold politicians and those in power to account. DM

This piece was written at the request of the Ahmed Kathrada Foundation for Africa Day. Sharon Ekambaram works for Lawyers for Human Rights and is Manager for the Refugee and Migrants Rights Programme. The views expressed herein are her own