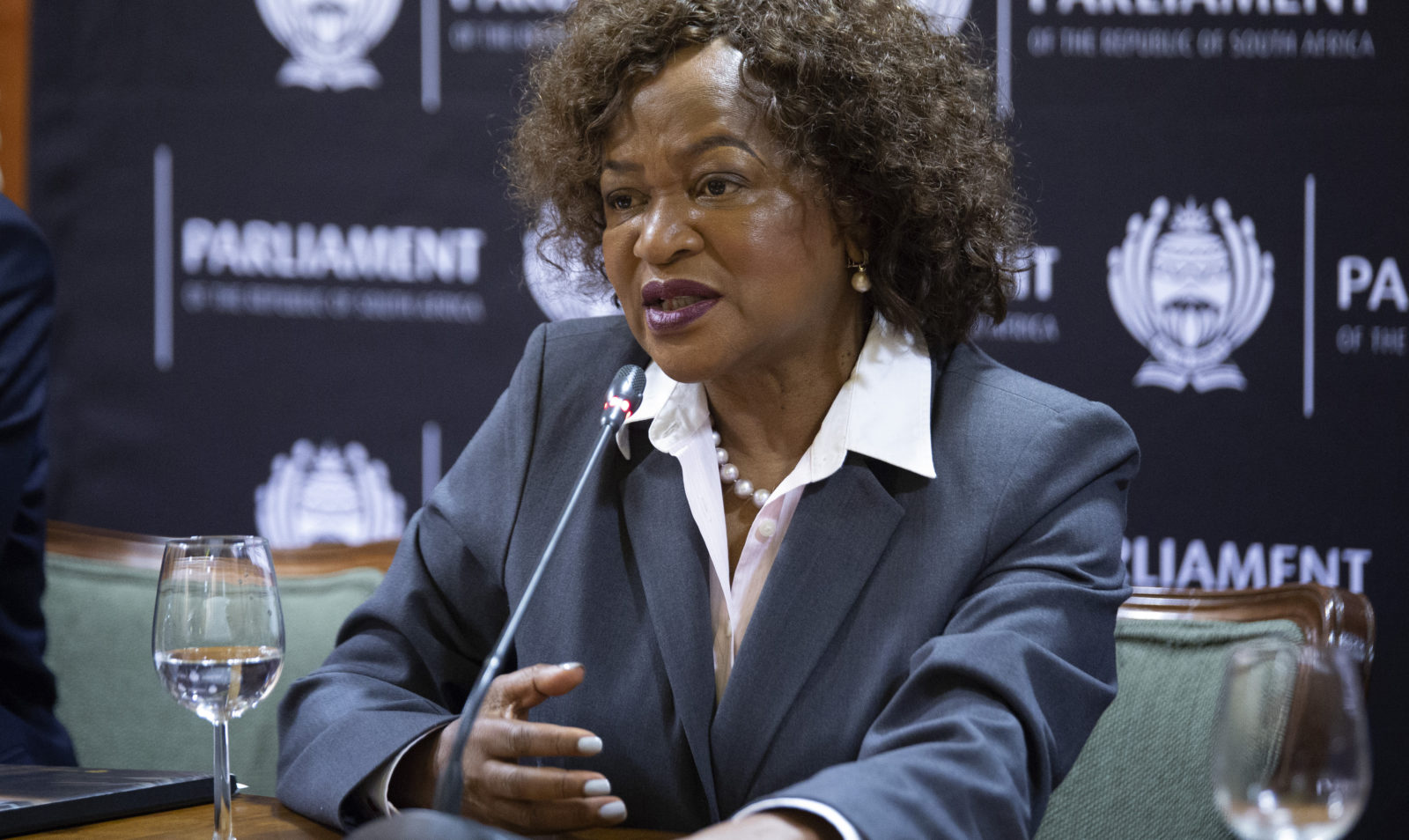 National Assembly Speaker Baleka Mbete held a briefing for journalists on Tuesday 22 May prior to their presentation of the budget in Parliament. Photo by Leila Dougan

The people’s Parliament is a platform for robust debates on national issues and oversight of the executive, with responsibility for quality legislation to better citizens’ lives. That much everyone agreed on during Tuesday’s debate on Parliament’s budget. But whether the national legislature actually had done this split the House as lawmakers put on their best spin.

It’s all about the legacy of the 5th Parliament, as legislators like to refer to the national legislature that came into being after the May 2014 elections. Already under way is the drafting of institutional reports on its work and achievements. Or as National Assembly Speaker Baleka Mbete put it during Tuesday’s pre-budget vote debate briefing:

“Those who arrive here must not find nothing… they must be guided.”

But what exactly will those who will be sworn in as MPs after the 2019 elections find? It’s difficult to say amid the end-of-term-itis that has started to infect many an MP and committee and others.

Parliament’s in-tray is stacked with more than 50 Bills in both the National Assembly and National Council of Provinces (NCOP), some dating back two years or longer. If the Bills currently before Parliament are not passed before the national legislature rises ahead of the 2019 elections, they lapse. That would clear Parliament’s in-tray, but leave the incoming MPs back at the drawing board. In the past four years, Parliament passed a total of 74 drafts, or an average of 18 a year including the mandatory Money Bills to give effect to the Budget.

Also pending are key national interest matters like the constitutional review committee’s process regarding a possible constitutional amendment for land expropriation without compensation. The report of the parliamentary State Capture inquiry is still expected, but with the official commission of inquiry announced, its steam appears to have dissipated. And so the Gupta brothers and their business associate, Duduzane Zuma, and former SAA board chairperson Dudu Myeni might get off scot-free for snubbing not only invitations to testify before the committee, but also the unprecedented subpoenas the inquiry issued. There’s still no official word on what, if any, steps would be taken, including possible criminal contempt of Parliament’s proceedings.

House Chairperson for Committees Cedric Frolick emphasised that Parliament’s “sovereignty” could not be allowed to be undermined, but did not disclose concrete steps with regards to those flouting parliamentary subpoenas. However, he did confirm that transcripts of committee meetings on State Capture would be handed over to commission of inquiry headed by Deputy Chief Justice Raymond Zondo.

Officially from mid-June, but for all practicality from the end of May after the Budget is adopted, parliamentarians will go on a two-month so-called “extended constituency period”, effectively a recess for electioneering. Shortly after their return in mid-August, MPs’ attention must fall on the other Budget-related non-negotiable standing item on the parliamentary calendar – the budget review and recommendation reports ahead of October’s Medium-Term Budget Policy Statement (MTBPS) that must be passed before Parliament’s year-end recess.

The time crunch is on.

Already ministers have been told that if draft laws are not tabled in Parliament by the end of May, these will simply not be dealt with.

Which of the Bills currently before Parliament to push through to legislative conclusion will be a tough choice, undoubtedly steeped in political considerations.

Outstanding draft laws include the Border Management Authority Bill, long touted by Home Affairs as fundamental for a controversial restructuring of border controls, the Traditional Courts Bill to fully bring into a regulated constitutional fold traditional law, although the opt-out clause has upset traditional leaders and the Critical Infrastructure Bill to replace the apartheid National Key Points Act.

There also is the National Minimum Wage Bill and its related amendments to existing labour laws which, although tabled in Parliament by the Labour Department at the end of November 2017, only started being processed by the committee in March, barely two months before the officially announced implementation date of 1 May 2018, Workers’ Day.

Law-making not only takes time, it has also administrative and co-ordinating pitfalls.

There is still murkiness about the status of the Expropriation Bill, referred back to Parliament in February 2017 for defects with the public consultation process in provinces; 15 months later it has not yet landed before the NCOP committee for that to be remedied. Regardless of the outcome of the constitutional review process for land expropriation without compensation, South Africa still requires democratic expropriation legislation to replace the 1975 apartheid law still on the statute books.

There’s more clarity about the Mineral and Petroleum Resources Development Amendment Bill referred back to Parliament in January 2015 over presidential concerns it would not meet constitutional muster. It took a while to find its renewed path through Parliament, but Modise has confirmed that the provincial mandates are being finalised ahead of a vote.

This Bill is crucial to give policy and legislative certainty in the mining sector. President Cyril Ramaphosa during his State of the National Address (SONA) said that the Bill “was at an advanced state, with an indication by Parliament that the Bill will reasonably be finalised during the first quarter of 2018”. This was the latest in a series of missed deadlines.

Mbete in her budget vote speech said: “…(T)he number of Bills passed is only one indicator of our performance and, as such, must be weighed against the quality of our engagements and the impact of the laws themselves on the ground.”

There are other outstanding issues.

The NCOP is in the process of establishing the committee required to oversee the national intervention in North West in terms of Section 100(1)(b) that effectively signals a wholesale takeover by national government of the provincial departments.

“We hope this committee of the NCOP will do what its predecessor did in Limpopo,” NCOP Chairperson Thandi Modise said at the pre-budget vote briefing, in reference to the 2011 national intervention in five Limpopo departments.

And Modise, a former North West premier, squashed speculation that she would return to head the province, saying the ANC had not asked her to do so at this stage.

“I just hope they don’t deploy me there,” she added in an unusual departure from the usual ANC-speak of being ready to serve in whatever capacity.

This arose from the Constitutional Court judgment in late December 2017 regarding the EFF case for parliamentary action against then president Jacob Zuma. Effectively it’s a take two on the Nkandla debacle judgment that followed the March 2016 ruling that Zuma had breached his oath of office and Parliament’s resolution absolving Zuma from any repayments for the non-security upgrades of the swimming (fire) pool, cattle kraal, chicken run and amphitheatre, set aside as “inconsistent with the Constitution” and “invalid”.

There is less certainty about parliamentary steps against ANC MP Mduduzi Manana, who for the second time in 10 months has been accused of abuse of women. After the assault on his domestic worker emerged earlier in May, Mbete referred that latest incident to Parliament’s ethics committee, which is still seized with a complaint related to Manana’s assault – while still higher education deputy minister – of two women at a Johannesburg club during August 2017, Women’s Month. For that he pleaded guilty and in November 2017 paid the R100,000 fine, rather than going to jail for a year, alongside community service.

“We will all just have to patiently wait… no matter how we feel.”

But, given the governing ANC’s public statements against violence against women, the public outcry over Manana still sitting in the parliamentary benches is, if not embarrassment, then discomfort.

Although Mbete indicated she had asked ethics committee co-chairperson Amos Masondo to address the issue in the budget vote debate, he didn’t really. Instead Masondo talked of the ethics committee not setting out to punish MPs, but to correct them, and of “ethics and revolutionary morality”.

Definitely kicked for touch to the post-2019 elections Parliament is the possible relocating of the national legislature, first raised during the 2017 SONA. A six-month feasibility study starts this month.

There are other issues, including the inconsistent reporting on parliamentary finances by its administration and labour grievances, particularly over performance bonuses paid to managers and salary negotiations, that saw the National Education, Health and Allied Workers’ Union (Nehawu) picket in the parliamentary precinct during budget votes earlier in May.

And with regards to the disciplinary hearing of suspended Secretary to Parliament Gengezi Mgidlana, Mbete told MPs she would “report to the House on completion of the process”.

Tuesday’s four-and-a-half-hour Parliament budget vote debate didn’t stop various political parties trying to claim credit for making the national legislature work. ANC Deputy Chief Whip Doris Dlakude emphasised that her party’s “superior logic” had prevailed, while EFF Chief Whip Floyd Shivambu highlighted how his party – often expelled by the so-called bouncers from the House in many of the chaotic scenes that have unfolded since 2014 – had brought “the necessary vibrancy” to Parliament despite its “lax” oversight capacity.

DA Chief Whip John Steenhuisen took a different tack, asking whether Parliament was a weather vane turning to prevailing political winds or “a road sign standing firm as a beacon of democracy”.

“If this great Parliament can be that road sign, standing firm through even the darkest night and strongest storm, resolutely directing us to a new hope, then the answers to the challenges of our Republic will be within our grasp, but, we must be bold enough to confront them,” he said.

It will be interesting to see how Parliament’s legacy reports deal with the Nkandla debacle, the repeatedly disrupted SONAs and frequent chaotic scenes. But there’s still work to be done – despite the ever strongly emerging end-of-term-itis in the parliamentary corridors where the eye is firmly on the 2019 elections. DM