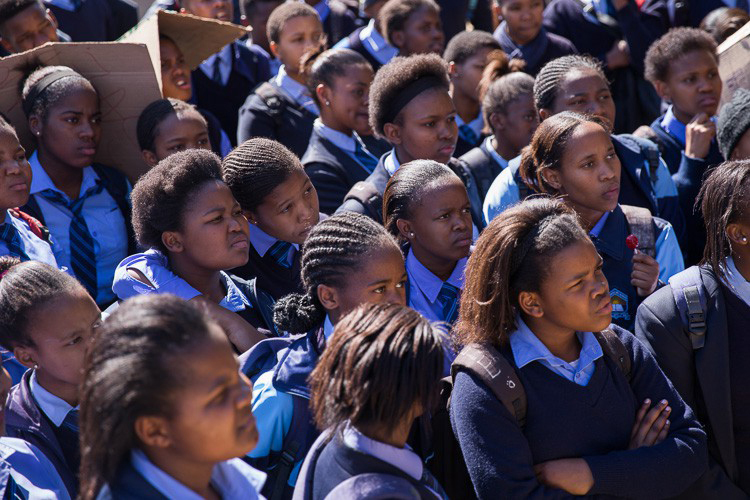 Thandokhulu High learners protested earlier this year calling for the dismissal of a teacher they accuse of sexual assault. File photo: Ashraf Hendricks

Western Cape Minister of Education Debbie Schäfer has instructed Equal Education (EE) to stop operating in the province’s schools by 22 May until her department holds a meeting with the organisation.

But in an email to GroundUp, Equal Education said the organisation has not yet received a letter from Schäfer. Although the minister has suggested that some of the allegations might be coming from school children, this was not true, said the organisation. None of the men accused of sexual harassment had any regular interaction with Western Cape school learners.

“None of the allegations relate to school children. Once we receive a letter from the MEC we will be in a position to consider her requests. We look forward to receiving it and will answer any questions posed to us, in detail,” said Equal Education.

In a statement on Monday Minister Schäfer said Equal Education works in schools across the province, and while at least some of the allegations appear to be from people on the staff of the organisation, it is not clear whether any learners are involved.

“If the allegations are correct, this is hardly the type of person we need working in our schools.

“I have therefore written to Equal Education requesting that they furnish me with the details regarding every interview or engagement conducted by Mr Motsepe, Mr Mazwembe or Mr Isaacs so far this year, with any female learner in the Western Cape. I have requested the names of learners, the school that the learners’ attend, the date of the interviews and who was present during the interviews. I require this information by this Friday, 25 May.

“I have also demanded an undertaking by 5pm tomorrow, Tuesday 22 May, that they will cease operations in Western Cape schools until such time as we have had an opportunity to meet with them and discuss the way forward. Should we not receive such undertaking, we shall instruct our schools not to allow anybody from Equal Education, and who is not a learner at the school, on to school premises,” she said.

Schäfer also wanted to know whether Equal Education conducts background checks on their staff and if so, whether Motsepe, Mazwembe and Isaacs passed such checks.

“Sexual abuse against young female learners is prevalent in our communities, as raised by Equal Education on a number of occasions, and it is distressing that such allegations have been made against high-ranking members of their own organisation.”

She has also requested that the Chief Director for Districts immediately investigate what measures are taken by NGOs working in schools to vet their members, and put necessary processes in place.

The organisation said, like the minister, Equal Education takes sexual harassment seriously. It said it had acted swiftly to address every allegation of misconduct that has been put before it.

It said that in 2018 it held a two-day staff seminar titled “Gender, Power, and Consent”, which it initiated and created with the Tshisimani Centre for Activist Education. It also had follow up workshops on the drafting of staff values for a safe and welcoming workspace, and a review of its sexual harassment policy.

Equal Education said its youth facilitators are trained on sexual harassment and “informed on the severity of engaging in this misconduct”.

“We remain resolute in our commitment to ensure that the actions of our members and staff reflect Equal Education’s values of respect, equity and accountability.” DM