Cape Town: Protesters call for SA to show its support for Palestinians 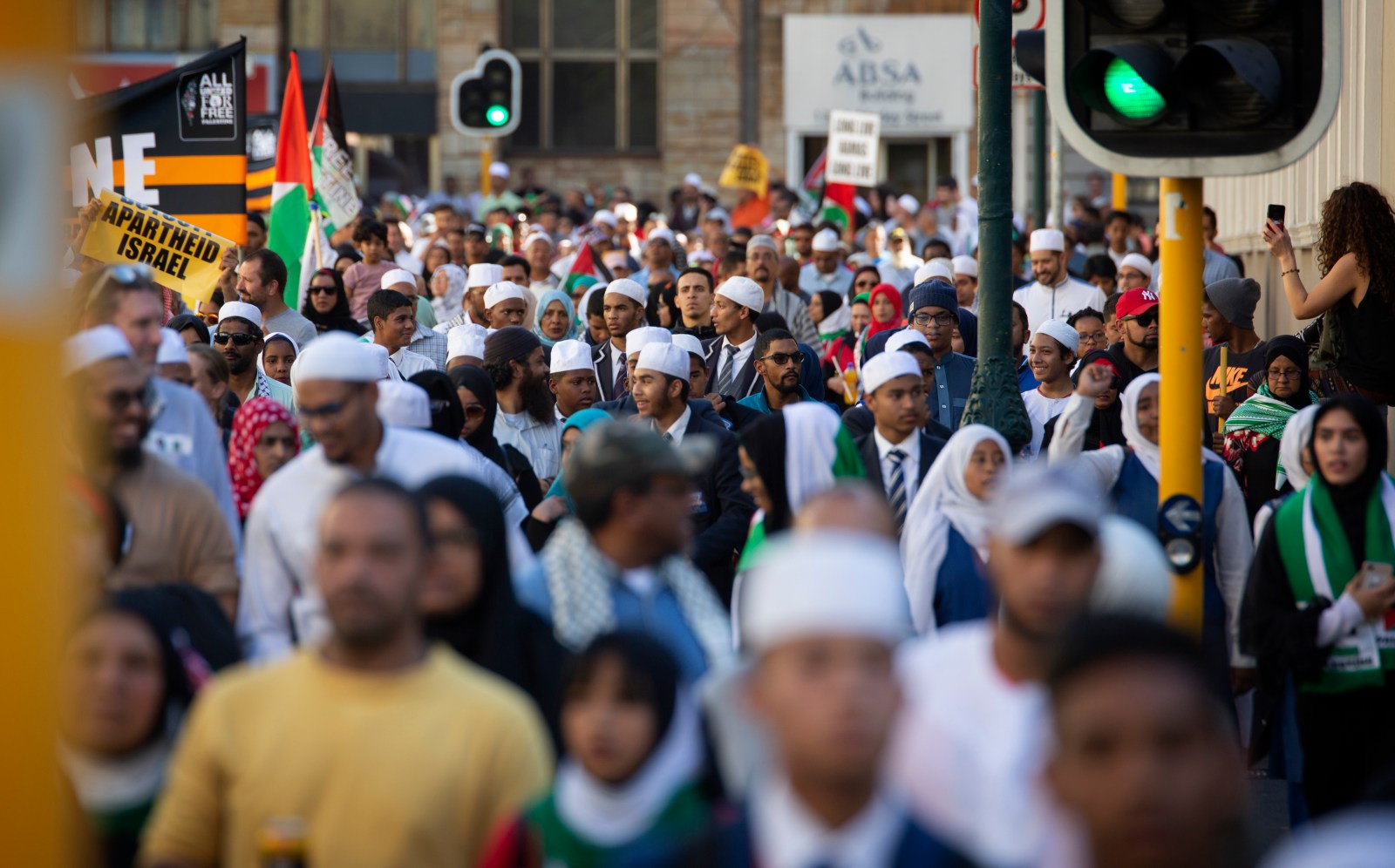 Marchers make their way through the streets of Cape Town on Tuesday 15 May, 2018 in a call for solidarity with Palestinians. Photo by Leila Dougan

Protesters gathered to commemorate the 70th anniversary of Nakba (the 1948 Palestinian exodus) and march to Parliament where they then delivered a memorandum to demand a total commitment from the South African Government to support Palestinians in the fight against “Apartheid Israel”.

Hundreds of people marched to Parliament on Tuesday morning in support of the Palestinian struggle for liberation, on the 70th anniversary of “Nakba”. Nakba is the commemorative Palestinian holiday that recalls the forced removals of Palestinian citizens the day after Israel gained its independence in 1948.

Protesters carried signs demanding “Boycott Apartheid Israel” and “Downgrade Embassy in Israel” as they chanted and sang songs that insisted on the necessity for a complete investment by the South African government in helping the Palestinians.

At Parliament a 90-minute rally unfolded that consisted of a wide variety of speakers who all emphasised the same messages and necessary steps of action: boycott all Israeli products, expel the Israeli ambassador to South Africa from the country, and demand the full right of return for all Palestinian refugees.

Many speakers invoked yesterday’s conflict between Palestinian protesters and the Israeli army in which at least 58 Palestinians were killed, according to Gaza’s Ministry of Health. The protests came on the same day the United States moved their embassy from Tel Aviv to the territorially disputed Jerusalem.

“We’re coming here because it was a damn bloodbath yesterday, it was a massacre yesterday,” began Muhammed Desai, co-founder of BDS South Africa.  South African support comes from a duty to the Palestinian people, Desai said, “A people that stood with us long before it was fashionable.”

The Israeli government disputes the narrative that the protesters were non-violent and claim the Israel Defence Forces (IDF) were acting in self-defence against terrorist attacks orchestrated by Hamas. On Twitter the IDF made a statement that “the troops used riot dispersal means to distance the terrorists from the fence, & the terrorists fired at the soldiers. The soldiers responded with targeted fire, thwarting a significant shooting attack”.

Activists in Cape Town continuously drew out comparisons between the apartheid regime in South Africa and “Apartheid Israel”, a government that they see as perpetrating the same scale of violations against human rights as the (former) South African government once did.

Using the perceived similarities of injustice, speakers called for a similarly effective international response to demand accountability from the government in charge.

“As we know as South Africans, the world stood with us… we said to the people at the time, start boycotting South African products. And our appeal today is that we will start doing the same,” said Reverend Edwin Arrison, a Palestinian activist who spoke on behalf of the National Coalition for Palestine.

“The people shall govern. The people have power… [Israeli Prime Minister Benjamin] Netanyahu does not have that power.”

The call to boycott Israeli goods is not a new idea. Most recently, in early April, an emphasis on a cultural boycott was reiterated when South African artist DJ Black Coffee decided to perform in Israel despite widespread criticism of his choice.

The Boycott, Divestment, Sanctions (BDS) movement has been around in South Africa for quite some time. Any mention of an official boycott elicited a universal and enthusiastic response from the crowd.

“[South African Retailers] should not be selling Israeli products anywhere, the [Israeli] soccer teams should not be playing in our country,” proclaimed Reverend Arrison.

Later, Congress of South African Trade Unions (Cosatu) Provincial Secretary Tony Ehrenreich took to the stage to say that South Africans should close “all harbours of our country to any products that come from Israel”. This statement was met by a thunderous applause of approval.

“I consider that South Africa is playing the most important role in leading the international solidarity with the Palestinian people,” said Palestinian Ambassador Hashem Dajani in an interview with Daily Maverick following the rally.

“The historical background of the struggle of South Africa, and the similarity of suffering and oppression against the apartheid regime, give the South African people more to feel than anyone around the world about the suffering of the Palestinian people,” explained Dajani.

“Our people require help, solidarity, and support, now more than ever,” he said.

On Monday, following the murders of Palestinian protesters, South Africa recalled its ambassador to Israel, Sisa Ngombane. A move that Dajani said the Palestinian people “welcomed” as a noted first step in diminishing South Africa’s relationship with Israel. Other speakers were hopeful that this move would ultimately lead to the downgrading of the embassy to a liaison office.

“How could we have ordinary relationships with the state of Israel?” questioned Duarte. “We cannot rest until the people of Palestine are free.”

The rally reached its conclusion when the organisers passed on a memorandum to MP, Chief Mandla Mandela, who reminded the crowd of his grandfather’s words on the Israeli-Palestinian conflict.

“We know too well that our freedom is incomplete without the freedom of Palestinians,” Nelson Mandela famously said.

Mandla Mandela recited a series of statistics regarding the number of Palestinians injured or killed by the Israel Defence Force in the past few weeks. Israeli brutality, said Mandela, is “akin to apartheid brutality in its darkest days”.

The memorandum itself referenced the previous day’s violence, and denounced “the abhorrent violation of international law and human rights”, by Israel. The memorandum also mentioned the cross-religion support for these efforts, welcoming the withdrawal of the South African ambassador to Israel and demanding the “unconditional downgrade of the embassy in Israel to a liaison office”, an ANC initiative that has been promised, but not yet instituted.

“South Africa must rise and take on Madiba’s call to respond to the greatest moral issue of our time,” wrapped up Mandla Mandela.