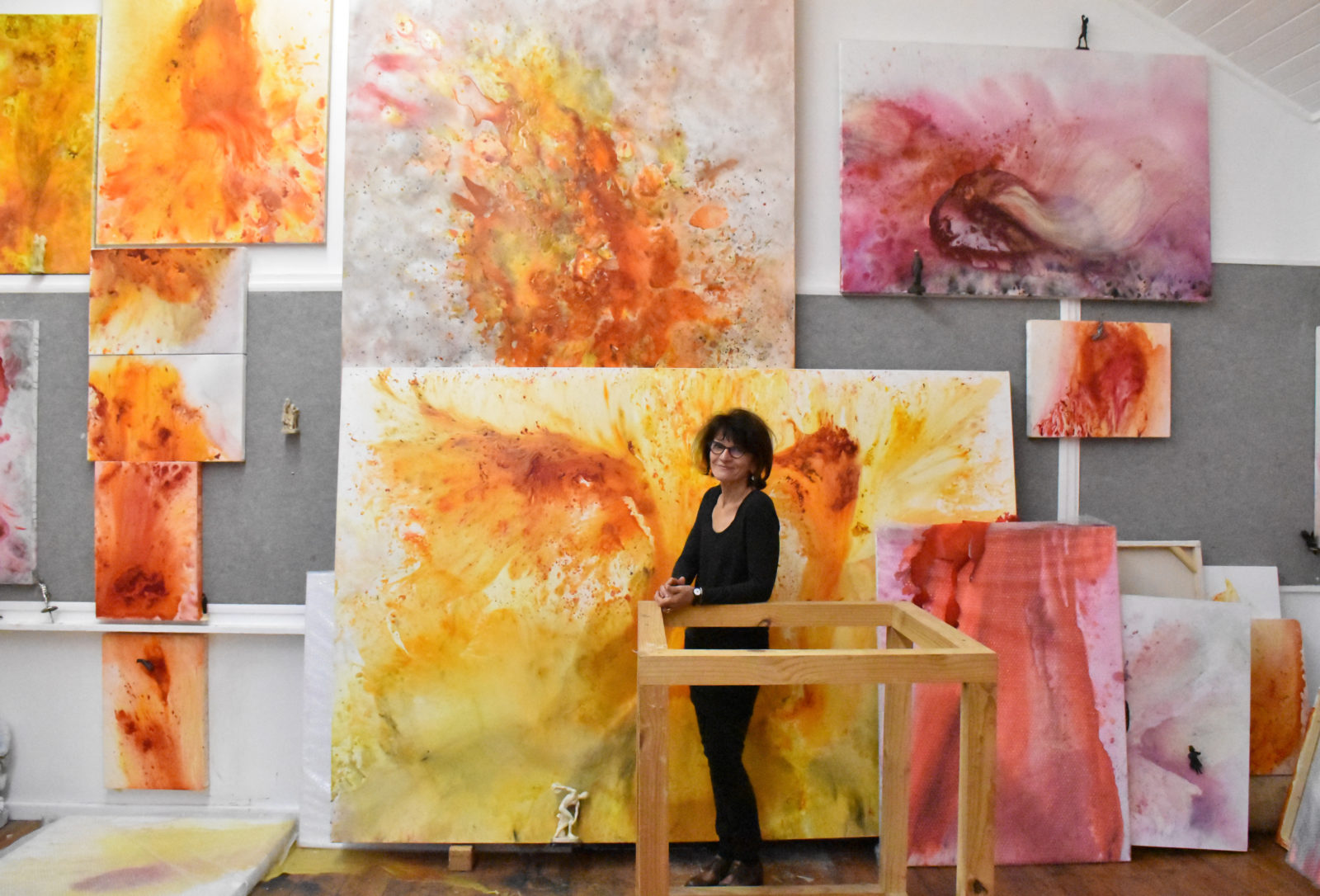 Penny Siopis stands in front of her a collection of her paintings in her Cape Town studio. Photo by Adam Yates

Penny Siopis’s exhibit at the Zeitz MOCAA explores some of history’s untold narratives through film, music, and primary sources.

Stepping into Penny Siopis’s studio is like stepping into three different semi-finished museum exhibitions at once.

Every corner contains a new piece of art. While massive, colourful paint canvases draw attention, they are far from the only works of interest in the spacious room on UCT’s Michaelis School of Fine Arts campus.

A multi-levelled bookshelf contains books, of course, but also a series of mini sculptures, figurines, miscellaneous objects and art supplies. “I love these,” Siopis says, gesturing towards the eclectic group of shelf adornments. A ladder stands in front of the bookshelf, presumably to reach the higher-placed objects.

The various art supplies, books, collectibles and artistic works (ranging from the nearly completed to the recently started), speak to what Siopis has managed to accomplish in 30+ years of exhibiting her work professionally: the ability to move seamlessly between media and forms, using the ambiguity of the title “artist” to traverse a multitude of creative landscapes.

“Personally, I work much more where the form that the idea comes in is as important as the idea,” explains Siopis. “Say I’m working in oil paint and I’m talking about memory and history, and the oil paint itself changes in time and ages, the oil paint is doing the thing in actuality that I might be interested in as a concept.”

Siopis’ paintings, photography, installations and videos have been exhibited throughout South Africa and across the world. She has won numerous awards over her storied career, spent time lecturing at the University of Witwatersrand, and is currently serving as an Honorary Professor in Fine Arts at Michaelis.

Siopis often plays with grand ideas in her work. She uses art as an entry point into initiating conversations on complicated facets of the human experience. Sometimes that manifests in an aesthetically pleasing painting, other times it’s through a jarring installation or video.

On her desk, Siopis has boxes of old 8mm and 16mm film reels as well as an antique viewing tool that she recently brought out to locate a specific reel. What might be seen as a film student’s treasured collectibles, are central to Siopis’ current exhibit at the Zeitz Museum of Contemporary Art Africa (MOCAA), This is a True Story.

The exhibit, which opened in February, brings together six different Siopis short films. Each film is a different, “true” story, in which non-linear montages of old film videos play while a story unfolds via text subtitles on the bottom of the screen.

The videos are sometimes directly relevant, other times loosely related, to the text on screen. Content similarities between the text and the visuals often trick the viewer into thinking that they are watching real photographic evidence of the story, when in fact that is rarely the case.

Instead, the text comes out of extensive research on Siopis’ part, and the visuals are old media reels and second-hand home videos from all over the world.

The exhibit’s six films are parallel in form and share similar reflections on a series of existential questions. Siopis tells the stories of her grandma’s immigration to South Africa from Greece, two men who tried to assassinate South African Prime Minister HF Verwoerd (one did so successfully), a nun who was murdered during The Defiance Campaign, the backstory on the jazz song “Skokiaan,” and a man’s reflection on his own history as it interacts with the evolution of modern Greece. “My interest is [in] using a very specific life and a specific context and a specific history to talk about wider, and I would say more philosophical, questions.”

The characters in each story are all real, or a conglomeration of real, individuals. Obscure White Messenger, for example, tells the story of Dimitrios Tsafendas, the man who in 1966 successfully assassinated HF Verwoerd on the parliamentary floor.

“Tsafendas’s story just kind of opened up a huge set of thoughts for me,” begins Siopis, “around statelessness around this person wandering around the world, around racial politics, around Apartheid, but prejudice more broadly, and then mental illness as a metaphor for displacement.”

Tsafendas drew Siopis’ attention for a multitude of reasons. The first being that they share a Greek heritage, and Siopis vividly remembers hearing about Tsafendas in the wake of Verwoerd’s assassination. But most of all, his complex humanity is what enabled Siopis to use him as a central character in one of her films.

“The thing that really connects me to him is the complexity of the man, the difficulty that he has which is a human complexity. Whatever I read about Tsafendas, a lot was actually his own words. He was incredibly verbal. It’s almost like words could never help him. That kind of authority we give to the word didn’t deliver anything that was that valuable to him.”

For Obscure White Messenger, as with all the films, Siopis searched for the perfect form in which to convey the story. “This story was so extraordinary it kind of had to be psychological. It couldn’t be in any way empirical, so it had to be the space of the imagination,” explains Siopis.

Siopis dove into this psychological space through primary source documents. The story unfolds via a series of questions and answers, although it is never quite clear who is the one, or ones, posing the questions. In reality, the text came from a series of interviews conducted with Tsafendas following his historic crime.

“The very first encounter Tsafendas had when he committed the murder was this psychologist’s report asking him this question: ‘Why are you crying?’ and then he starts talking. It’s very particular. It’s so particular but it’s also drained of its particularity. It’s one of these strange things. It could be any moment of any psychiatrist where somebody has done something that they sort of regret and they don’t know why they did it and they don’t know why they’re crying. This sort of interrogation felt to me a really interesting form through which to convey the complexity of that character.”

Obscure White Messenger is just one example. Each film opens the door for a continuous navigation between the specificity of the story, and the universality of the subject matter. This approach allows Siopis to meditate on questions of memory and history, themes reflected in the form itself, as much as they are in the narratives.

The use of old film reels enables Siopis to participate in what she sees as the social life of things, a recycling ethos that she applies to her art. “You take what’s in the world and remake something. From something old and obsolete, you make a new story.” She continues, “I’m not going to film it, it’s already in the world; it already had stories in one form or another. It already comes inscribed with a sort of history and value. Then I find it and I recreate something from its material body.”

Siopis rescues discarded home videos from flea markets, thrift shops, and charity shops. Narratives that, without her inclusion of them in her work, would be lost in history. The true stories she tells in the films, accomplish the same feat.

“So there’s a lot of ideas of what can and can’t be shown, what stories were dominant – most of them [in the exhibit] were not. A lot of people have seen the little exhibition as a way of bringing to the surface stories that were never told. Some of them, deliberately suppressed, and others just so ordinary they were insignificant in some ways.”

The compelling exhibit forces active engagement from the spectator who must follow each story by reading the first-person subtitles. The films are accompanied by carefully chosen music that is used to coax the viewer into a certain emotional state, sometimes a state that is contradictory to the harsh stories on screen.

The physical layout of This is a True Story lends itself to allowing a total immersion in the narratives. Each film is shown in its own pod. Each pod is a dark and empty space, save for the illuminating screen, speakers that surround the spectator with music, and chairs to sit on while engaging with the story.

The films’ narrations are unreliable, confusing, and non-linear. But for Siopis, the notion that memory and history are actually any different than that is a false ideal. “I like all the holes in memory, and the contradictions, and not keeping a line, and going back on things, and digressing. It’s all these digressions I find produce our psychology as human beings, but we’re forced always to have a point, to have a beginning to have a middle, to have an end. But really, the way we actually are is the opposite to that. I think what art does is assert the necessity for that kind of space or that kind of practice.”

Siopis sees the art field in general, but especially this exhibit, as a way to wrestle with complicated ideas without having a definitive answer by the time one reaches the end.

Siopis summs up the exhibit’s videos saying, “They are points of reflection, they’re meditations, they’re moments to engage, they have a little story, [the story is] true, and the story has a tale to it that tells something.”

And what that tale tells is often unique to each spectator. For some, they may be learning about Tsafendas and the other lost characters of history for the first time. For others, the stories allow a reflection on how people construct memories.

The home videos demonstrate how one could rewrite a story with archives from their own lives, the narratives conjure up questions about how historical moments are formed through collective memory, and the music introduces the impact of emotions on story recollection. Taken together, the videos, the text, and the music, one is forced to consider whether it’s objective reality or subjective experiences that constitute what they understand as true stories. DM

Cate Blanchett is the only actor to win an Oscar playing an Oscar-winning actor (Katherine Hepburn in "The Aviator").