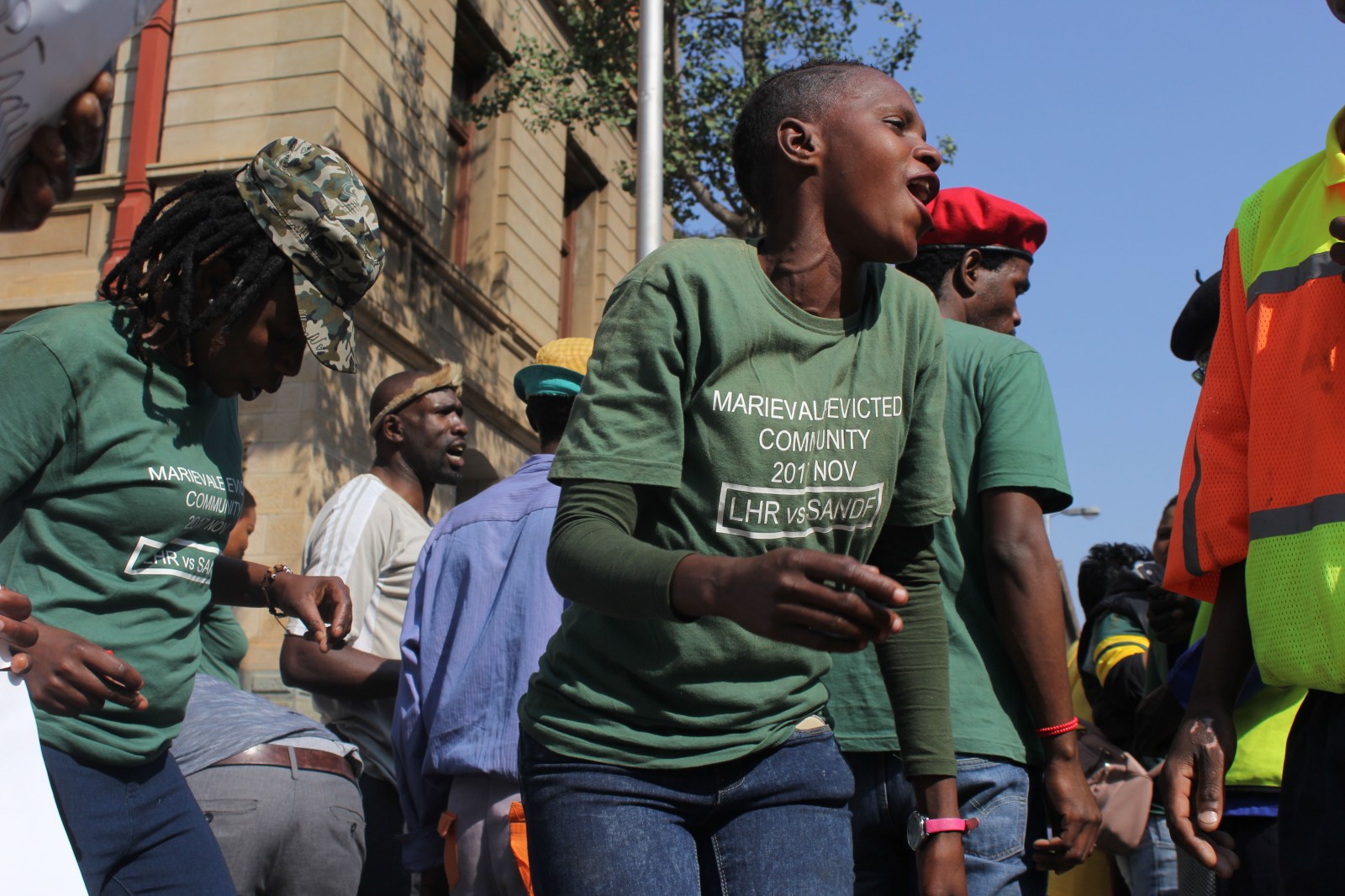 Marievale residents represented by Lawyers for Human Rights protest outside the Pretoria High Court while their case is being heard on 9 May 2018. They were evicted from their homes by the military in November 2017. Photo: Rumana Akoob

Chris Koitsioe was deployed as a peacekeeper for South Africa in Burundi and Lesotho when he was part of the military. While he was putting his life on the line to protect his country, he never thought he would have to take the same institution that he served – the SANDF – to court in an attempt to protect his own home. On Wednesday, the North Gauteng High Court handed down a judgment stating that Koitsoie and his community in Marievale must be allowed to return to their homes within 30 days.

Chris Koitsioe, along with 150 families represented by Lawyers for Human Rights (LHR), took the SANDF to court following their eviction by the army in November 2017 from their homes in Marievale. The group had petitioned the court to find that the army had not only acted illegally in evicting them but that they should also be allowed to return to the base.

The disused base from which they were evicted was home to about 600 people – many of whom claimed they were intimidated, tortured and removed from their homes “by the barrel of the gun”.

In affidavits presented to court by the LHR, one resident said soldiers “threatened to shoot my dogs”. Several complained that the soldiers did not allow them even to remove all of their possessions from their homes.

The SANDF was by law obliged to go to court first to request an eviction order, something the applicants claim was not done.

On Wednesday the Pretoria courtroom was filled with expectant residents of the community when Judge Norman Davis handed down his judgment, ruling that the residents had been unlawfully evicted, and should where possible be returned to their homes. In addition, he instructed the SANDF to desist from harassing, intimidating, threatening and restricting the movement of the community.

In its submissions the military said they had not evicted the residents but had simply carried out a “training operation”. The court rejected this argument.

Davis had no trouble coming to the conclusion that the evictions were unlawful, but found it more difficult to determine how to remedy the illegality.

He concluded ultimately that the residents could return to their homes on the military base on two conditions:

If these requirements are not met, Davis has instructed that the Department of Defence “provide temporary adequate housing” for residents.

The judge’s order must be effected within 30 days.

As the community left the court on Wednesday, ululations filled the street where people celebrated their second victory.

“I am very delighted,” Koitsioe said.

“I am just waiting for 30 days to see if the military will let us back or will they be in contempt of court. I have been watching their behaviour and they have learnt the hard way,” he said.

Counsel for Lawyers for Human Rights, Jacob van Garderen, met with the crowd and told the residents that he was happy with the ruling.

Wednesday’s judgment is the second successful ruling against the SANDF.

In a separate case challenging the eviction, the South Gauteng Court in Johannesburg ruled that the evictions were illegal. This order is currently being appealed to the Supreme Court of Appeal by the SANDF.

“If the Department of Defence and the military decide to appeal this judgment, then the same process will follow… this is the second victory for Marievale (but) it might not be the final victory because we may have to go through the appeals process first, but you have shown yourself to be a strong community,” Van Garderen said.

Spokesperson for the DOD, Siphiwe Dlamini, released a statement following Wednesday’s judgment saying they respected the Court’s decision and “the department will abide by the ruling of the court”.

In its application, the community had asked the court to grant their immediate return to their homes. If that was not possible they asked the court to order the SANDF to pay each resident R1,500 a month so that they could pay for adequate alternative accommodation in the vicinity of the base.

The disused base near Nigel had been home to people from all over Africa and from different socio-economic backgrounds. Like Koitsioe, some of the those living on the base were either once part of the military, relatives of former soldiers, or moved in after homes were sublet unlawfully by the soldiers who formerly lived on the properties.

Koitsioe moved into Marievale with his wife and two children in 2004 when he was still a soldier and remained there after he resigned in 2007. He had nowhere else to go. The community alleges that they had been paying rent to a commander of the base till 2008 who, they claim, had “squandered” the money.

The community was mostly self-sufficient as the closest town was a 30-minute drive away. Koitsioe helped organise a bus to take children from Marievale to school. He delivered bread and milk daily to residents and made a living out of running a tuck shop. When the evictions happened, all of his stock was taken by the soldiers. He resisted and was arrested as a result by the military police. Now he lives in Happiness Village where about 200 Marievale residents moved after the eviction. Lacking other options, they erected informal structures a kilometre away from their old homes where they have since been living without sanitation, electricity and running water.

Because of the poor conditions in Happiness Village, Koitsioe and his wife decided to send his children to live with his mother in North West until they were returned to the Marievale base.

“My family is very happy but we are waiting until we are back in our homes before they come back to Gauteng,” he said.

Another resident, Willem Koekemoer, who has lived in Marievale for 23 years, joked, “I’m ready to party!”. He then expressed relief that “a whole lot of pressure is down and it finally feels like I can do something I haven’t done in months and sleep tonight”.

Despite the judgment, when the residents returned to their informal structures in Happiness Village, they had to drive passed the Marievale base, which is still guarded by armed SANDF soldiers who prevent anyone from entering, including the police. Military style trenches have been dug around its perimeter to prevent anyone not given permission by the military from entering. Fences have been erected.

Koitsioe said if the SANDF appealed the judgment, residents would take the case right up to the Constitutional Court.

“We hope everything will be fine, maybe they have learnt the law is on our side and that this has gone too far,” he said.

The law, as is inscribed on the giant wooden doors of the Constitutional Court, is on the residents’ side.

“No one may be evicted from their home, or have their home demolished, without an order of court,” it reads. DM