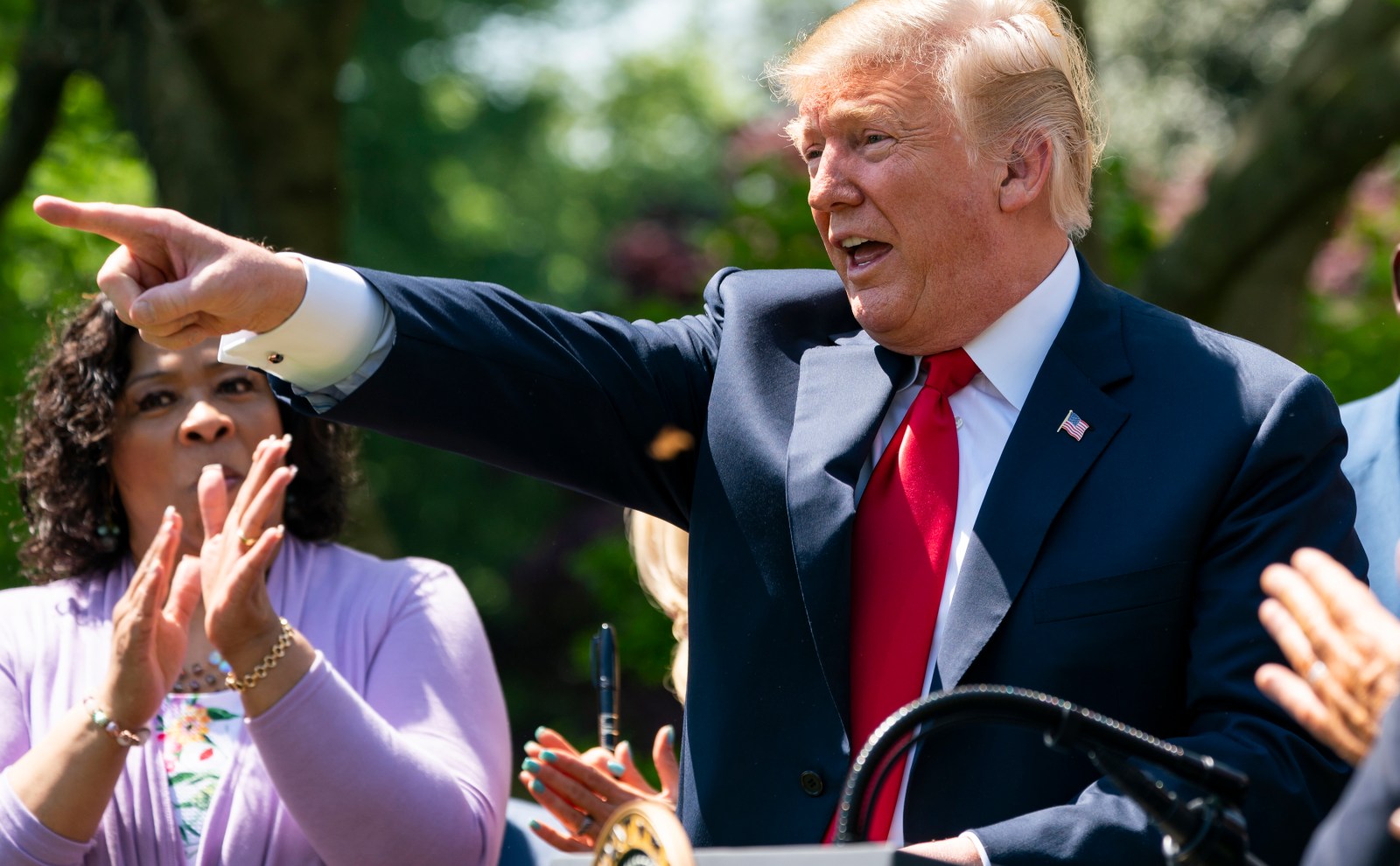 US President Donald J. Trump attends a National Day of Prayer event in the Rose Garden of the White House in Washington, DC, USA, 03 May 2018. EPA-EFE/JIM LO SCALZO

Unlike the other top 10 nations most frequently voting against the US in the UN, South Africa, in security terms, is viewed as a vital strategic ally which has powerful political allies in Asia, Europe, and Latin America. We will probably see Trump flip flopping on the threat to cut aid to South Africa.

Those who claim the Donald Trump administration has a negative view about the continent of Africa are correct. In fact, their well stated impressions tend to lean towards being an understatement about the most right wing US administration in African Affairs since the days of Ronald Reagan which in some respects makes Reagan seem to be a bit more to the left.

The evidence in fact is overwhelming since the transitional days of the Trump administration regarding the deep degree of negativity, indeed stereotypical ignorance of Trump and those in his inner circle have towards the continent.

Certainly Trump’s sh**hole remark last January most grotesquely displays his negativity towards the continent despite his weak effort to take his words back and has yet to issue an apology. More than likely he will not bother to apologise for making such offence reports towards the second populous continent on the planet which fits his pattern of offending, denying, and then moving on to the next insulting adventure.

It is no startling news, though as unfortunate it happens to be, that Trump has yet to press to fill the missing senior leadership gaps in State Department African affairs such as is apparent in the absence of the Assistant Secretary for African Affairs and Ambassadorships to key African countries such as South Africa, Somalia, and Tanzania unlike in the cases of such essential senior State Department appointments in Asian, European, and Latin American Affairs goes beyond any attempted excuse such as benign neglect or bureaucratic snares. It is an unprecedented insult of a US President towards the continent. In addition Trump has only recently, after over a year in office, finally received in the White House, President Muhammadu Buhari as the first African Head of State.

Additionally, as more than few observers of US-African Affairs have pointed out, the firing of Rex Tillerson as the Secretary of State. His successor former CIA Director Mike Pompeo is not a good omen for US-African Affairs. And certainly that Tillerson was on mission to Africa to clean up the Trump shithole remarks fiasco when he was fired gives even more weight to Trump’s disinterest in the continent.

Tillerson is a savvy post-Cold War corporate businessman who countered the cultural bigotry of the Trump administration and anticipated being willing to do such during his Senate hearing. He had experience in and respect for the continent which explains his silence in the midst of Trump’s shithole remarks – incidentally a point strangely missed by the mainstream global media.

If his hands had not been tied by the Trump administration’s right-wing foreign affairs and department cutbacks, we would have seen a State Department much more inclined to support trade, good governance, rule of law, and well-being American approaches to the continent.

But who knows, given that he did oversee the closing of the South Sudan Special Envoy office put in place by the Obama-Biden administration which has been criticised as evidence of Tillerson’s insensitivity towards human rights.

What we now have in Pompeo is a right-wing politician with little or no experience on or about the continent who has the potential of having a security approach to American foreign policy globally and with the potential of militarising through engaging primarily in counter-terrorism.

This could lead to a quasi-return to the Cold War days where tyrannical and otherwise corrupt African leaders who are violators of human rights and who support American military programs to fight terrorism in Kenya, Nigeria, Sudan, Somalia, and Chad are more highly regarded than African Heads of State doing all they can to sustain peace in their borders and raise the standard of living of their citizens.

It is important to encounter and deny the myth going around that the Trump administration has no policy approach to the continent of Africa. Though not formulated officially, there is a Trump African Affairs policy. It is, as said, security as well as accountability. Enough has been said about security.

When it comes to accountability, since the Trump administration transition days there has been at least informal concern about where allocated foreign aid is going on the continent. Questions have been raised about why it is that millions of dollars have been given to African countries to fight terrorism but it still rages on and to the fight against HIV/Aids but it is still spreading.

There has been recent concern about the Trump administration cutting aid to South Africa like other nations frequently voting against the United States in the United Nations. This is more than likely an idle threat as is the situation in many other cases of Trump’s foreign policy declarations.

Unlike the other top 10 nations most frequently voting against the US in the UN, South Africa, in security terms, is viewed as a vital strategic ally which has powerful political allies in Asia, Europe, and Latin America. We will probably see Trump flip-flopping on the threat to cut aid to South Africa.

It is a nothing threat since the majority of other top 10 countries voting against the United States are already on the States naughty list and are not receiving any aid or very little such as North Korea,Venezeula, Cuba, and Zimbabwe.

The major issue that the South African government will have to answer to is why in 2016, as a middle income nation, did their country receive nearly $460 million in foreign assistance and why it has in the past been so generously given US foreign aid? Where did it go? Is it being used effectively? Which measures are in place to assure the money did not land in personal pockets and reached those it was supposed to? Such bottom line accountability questions will be asked also of other richer or poorer African state leaders.

Whoever becomes the new Assistant Secretary of State and future incoming Ambassadors to African countries will be asking such accountability questions which could result in severe consequences to those nations not doing essential things to end their historical dependency on American dollars and becoming much more economic independent in their internal societal affairs.

The tightness of money and emerging new generations of international aid NGOs who are post-Cold War in their thinking and developmental empowerment aspirations for the continent and its nations are also asking hard ball questions about fiscal management and impact outcomes as is the case for the United States and other traditional donor nations.

We have to even consider this in regards to China in African Affairs which has become the largest donor to the continent. The gravy cannot continue to flow from China to the continent of Africa forever. Chinese direct foreign investment in Africa is only 5% of its global direct investment donations and more than likely will decrease over the coming years.

So, just like the worries about any degree of decline of US and other Western foreign investment assistance in Africa there needs to be the equal if not greater concern when it comes to the realities of eventual Chinese cutbacks on aid.

The impact of possible Chinese decline in investing in such critical such as massive physical infrastructure projects will have devastating impacts in African nations.

The only way out of this situation, which is ultimately about the economic and social well-being of African countries guided by good governance and rule of law, is going to have to be the development of new ways that African governments and civil societies organise, mobilise, and engage with the rest of the world. This must include and go beyond institutional endeavours such as the African Union, the regional cooperative entities, BRICS, and external ones such as the United Nations, the IMF, and the World Bank.

It is time for Africans to become independent in generating their own revenue and having in place effective accountability standards to assure sound fiscal management and impact in how revenue is used to address vital public good matters.

It is time that Africans cease viewing themselves as dependents in need of handouts. This has been said by many others within and outside the continent over the years. It has now come to the point with African nations finding their backs against the global wall that they must begin to rise and effectively take care of their own developmental empowerment business. DM