Alien trees are a major threat to water supply – so why doesn’t this reflect in Cape Town’s draft budget?

By Daily Maverick Staff Reporter• 2 May 2018 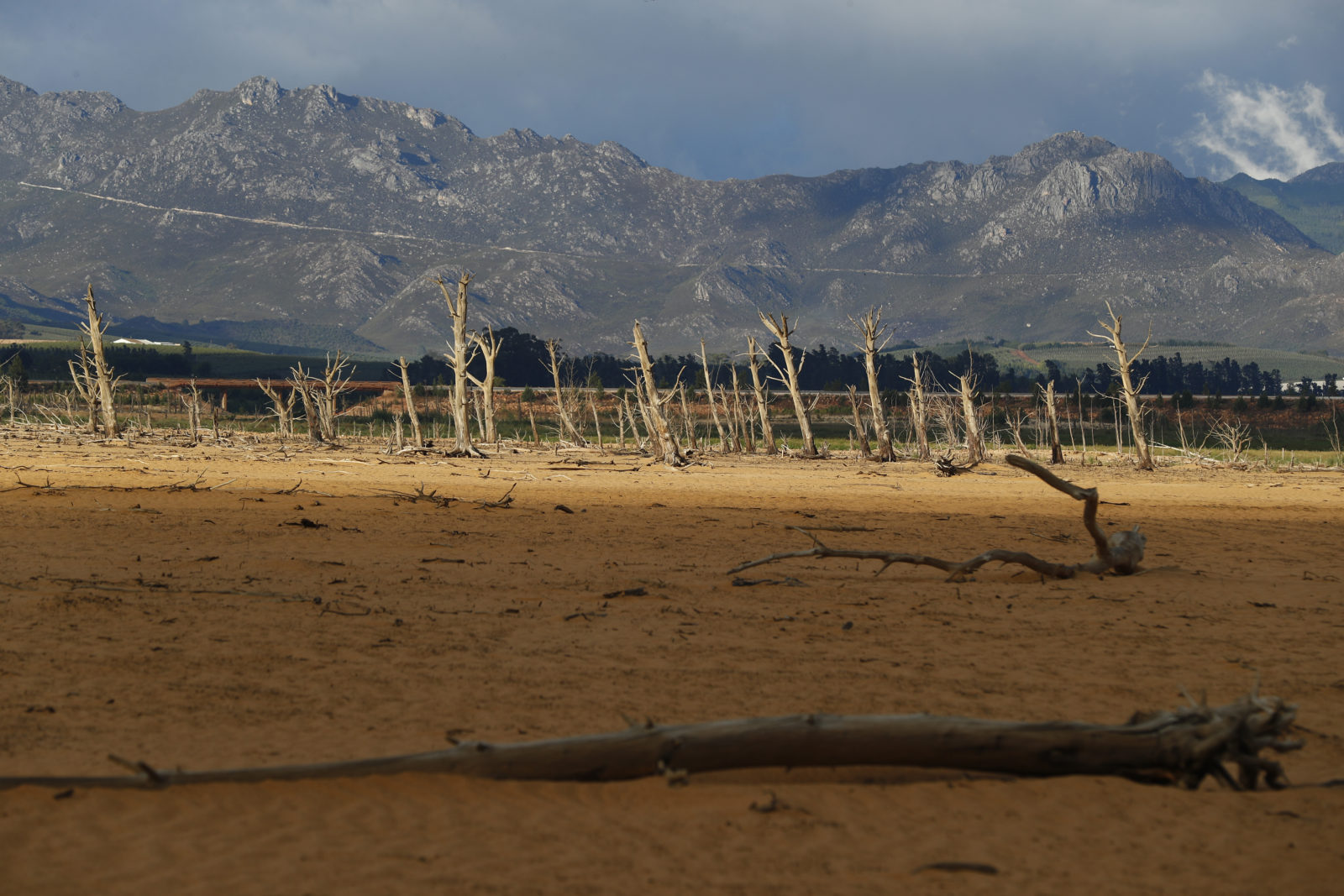 Tree trunks, which were submersed when the dam was full, stand in the critically low Theewaterskloof Dam in Villiersdorp, South Africa, 23 January 2018. EPA-EFE/NIC BOTHMA

Invasive alien trees are reducing water supply to our dams by almost as much as the ±150 megalitres-per-day bulk water augmentation target, and have similar impacts on groundwater recharge. Yet the City of Cape Town’s draft budget and integrated development plan – which are open for comment until 4 May 2018 – makes no provision for alien clearing. The City aims to create dependence on groundwater without addressing threats to the resource – ultimately setting us up for a much bigger disaster when the next drought occurs.  By Jasper Slingsby and Mark Botha.

Catchment restoration is cheaper and less environmentally risky than other augmentation options. Moreover, it is an integral part of ensuring sustainable water supply in the long term.

The City of Cape Town itself has previously spoken of the benefits of clearing alien vegetation. It has earmarked some 17% of its draft Budget for 2018-2019 (which amounts to over R1.5 billion) to water augmentation schemes focused on abstracting water from the environment. Yet bizarrely, there are no large budget items for helping ensure that the environment can supply sustainable water yields – the obvious first step in any water security programme.

Estimates are that invasions by alien trees (pines, wattles and eucalyptus) in our mountain catchments are using more than 38Mm3 (million m3) of water – water that would otherwise fill our dams every year. That’s 104MLD (megalitres or “million litres” per day), relative to the City’s augmentation target of ±150MLD, a problem that is becoming more severe as invasions expand. Moreover, there are additional impacts on groundwater recharge that haven’t been quantified. This is compromising the sustainability of water supply to both existing dams and the groundwater well fields the City is developing.

Clearing alien plants and restoring the catchments that supply the Western Cape Water Supply System (WCWSS) – the dams and pipelines that deliver our bulk water – can make a substantial contribution toward the City’s augmentation goals, likely at less cost, with many associated economic and environmental benefits. Given the scale of the budget proposed for groundwater abstraction and its associated uncertainties and environmental risks, it seems inconceivable there is no clear investment in catchment restoration – a no-risk and no-regret option.

Groundwater alone is not the answer

Adopting an exploitative approach and not tending to the needs of the environment is not sustainable and will reduce the resilience of the City’s future water supply. The City has put much emphasis on the need to diversify supply sources to ensure resilience against drought, but essentially proposes putting all its eggs in one basket – groundwater abstraction from the low lying sand aquifers (Atlantis and Cape Flats) and the fractured rock aquifers (Table Mountain Group (TMG)) associated with our mountains. Why no investment in catchment restoration? Every alien tree in our catchments means less of the meagre rain that has been falling makes it to our dams.

While the City acknowledges that groundwater is not an alternative source to surface waters, the logic is that water cycles through aquifers slowly, allowing abstraction during times of need – in the hopes that they recharge during times of plenty. This may work for the sand aquifers (~100MLD), because we can manage and augment their recharge if there’s spare water around, but this is not feasible for the TMG rock aquifer (~50MLD). Recharge has been reduced by invasive species and climate change for decades, and is only reducing. Creating dependence on groundwater without addressing threats to the resource will only set us up for a much bigger disaster when the next drought occurs.

To add insult to injury, the City’s plans for the TMG includes targeting the unconfined portion of the aquifer, because it is shallower, cheaper and faster to drill into. The unconfined aquifers are linked to surface waters, and abstraction will reduce water supply to wetlands and streams that feed our dams. In other words, we will be severely damaging our ecosystems and associated biodiversity in order to steal from our own future water supply – a lose-lose option.

The case for catchment rehabilitation

The estimated loss of 104MLD is conservative, since the calculations were based on alien densities from 2008. Recent data from the catchments feeding Theewaterskloof reveal that invasions are already some 33% worse. Current impacts (i.e. potential gains) could be far greater. By 2045, without adequate control of invasive trees, we will likely be losing 356MLD – the equivalent of a Berg River dam (139Mm3) every year, with much greater costs to implement control programmes. The problem of invasive alien plants is only going to get worse if not effectively controlled over the long term.

Recent studies have shown that clearing aliens from the worst infested catchments above our dams may cost less than R150 million annually – releasing around 50MLD. These costs would decrease substantially over time, provided the rehabilitation was done effectively. This may like seem a lot of money, but it’s a tenth of the total groundwater budget for next year – or a fifth of the TMG aquifer.

Beyond improving catchment water yields to dams and groundwater recharge, alien clearing and restoration has added benefits for water quality, biodiversity conservation and ecotourism, while reducing flood and fire risk, erosion and dam siltation. Perhaps most pertinently, investment in a large rehabilitation programme and the associated employment would provide some respite for many farm workers and their families in light of the more than 33,000 job losses caused by the drought so far.

These benefits have been recognised previously, and are the basis for the Working for Water and Working on Fire programmes that have been aiding catchment restoration and management since the mid-1990s. While these and other programmes are doing great work, they operate at a national scale with limited budget, and need all the help they can get in the war against invasive plants. They already fund most of the City’s alien clearing efforts, but this is not enough. The draft budget suggests the City can afford to contribute to the fight from their (or our) own pocket, and stands to gain the most.

Unfortunately, no funds were transferred from the Department of Water and Sanitation in 2017 to clear catchments, despite their requirement to budget for the costs of this control. Provincial entities get woefully inadequate budgets from Treasury as they have to compete with education, health care and transport – which will always get the lion’s share in a developmental state. That leaves municipalities to ponder their mandate for securing water supplies. At least Cape Town can afford to contribute far more than it does, and is able to recover the costs from water users directly, and not depend on another sphere of government.

The challenge to leadership

If resistance to budgeting for clean catchments is about mandates, our legislation requires municipalities to explore the most cost-effective means of service delivery. They are also required to pursue climate resilient paths to adaptation and planning. Improving the natural runoff and recharge in our catchments through restoration is likely to be much less expensive than desalination, is easily on par with or cheaper than TMG aquifer borehole drilling, and is fundamentally more sustainable and resilient than either.

The law also requires anyone who is intending to harm the environment (by, for instance, drilling holes in sensitive wetlands high in mountain catchments for groundwater abstraction) to first do all they can to avoid the impacts, or minimise and remedy the damage as far as possible. It is hard to see how budgeting only for drilling, and not for rehabilitating catchments to improve recharge is compatible with this “duty of care”.

Counterarguments about affordability can be dispelled by the modest increment required in water charges for catchment rehabilitation, compared with other technological approaches. The City is recovering costs for augmentation schemes from raised water tariffs and other revenues. Shifting a small portion of that investment for groundwater development to catchment restoration would likely reduce these costs in the long term.

There are no fundamental legal constraints to Cape Town spending on land outside municipal boundaries. If the City is funding massive investment in boreholes on land that they do not own outside their boundary, why are they not able to control invasive trees on these same lands?

Yes, the city is tired of picking up after other departments who haven’t delivered. Yes, the bureaucracy and administration are likely to be challenging. Yes, the agriculture sector must come to the party in a bigger way. Yes, drilling into the aquifers seems like a quick fix to avoid the difficult issues of cooperative governance for catchment sustainability – although these are likely to rear their ugly head here too. But we are in a crisis. If the city doesn’t show leadership, and provide the key resource (dependable long term budgets for rehabilitation) to convene all other role players, the situation will only get worse.

Long, hot baths will unfortunately remain a thing of fantasy for some time yet. Catchment restoration is not a quick fix, but neither are the other augmentation schemes. Improving our catchments will augment water supplies substantially at relatively low cost and in similar timeframes. Abstracting water from our catchments without investing in restoration is creating a ticking time bomb. The City can dally and argue until the next ‘Day Zero’ about whose mandate it is to maintain catchment health and who should pay for any rehabilitation. Or it can provide real leadership, and craft a solution that works for its ratepayers and dependents.

The solution is simple: R1 per kilolitre from the bulk water tariff that the City charges all users (including surrounding municipalities and some farmers) would generate enough funds to completely rehabilitate the supply catchments over the next decade. The worst outcome is that we would have helped out vulnerable workers, improved our catchments, reduced the risk and severity of wildfires and floods, and invested in a key adaptation to climate change, while reminding Capetonians of their debt to the mountains and to use water wisely. DM

The window to comment on the budget and amendments to the Integrated Development Plan closes on the 4 May 2018. Read Slingsby and Botha’s comment here.

Slingsby is a scientist with the Fynbos Node of the South African Environmental Observation Network, which focuses on long term environmental research within the Department of Science and Technology’s National Research Foundation.

Botha is an independent researcher and thinker interested in innovative approaches to environmental management, and developing economies that invest in rehabilitation of ecological infrastructure.