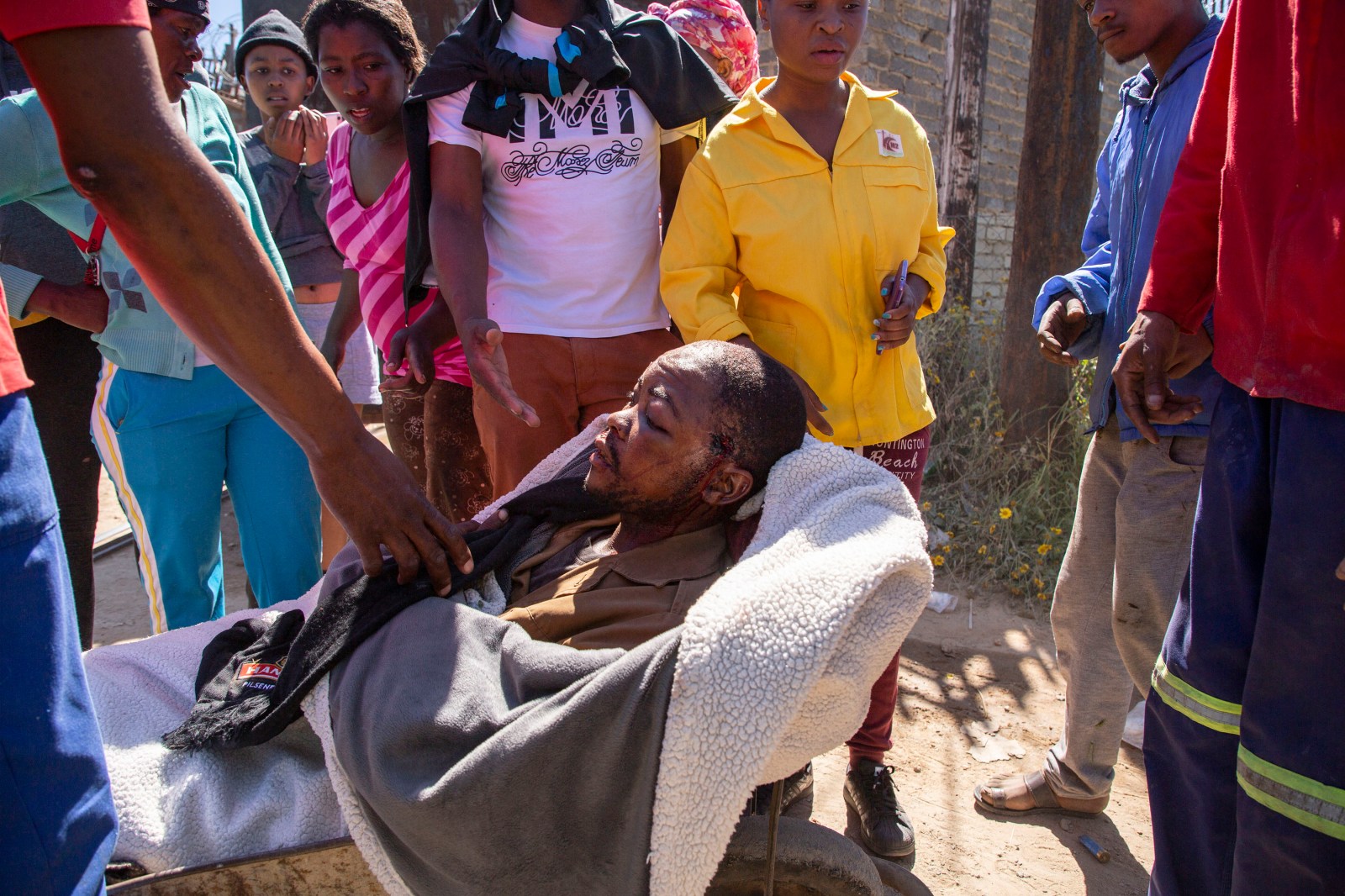 Community members claimed that this man is mentally challenged. He was shot in the head by police on Wednesday in the township of Seweding near Mahikeng and has remained untreated. A community member was wheeling him around on a wheelbarrow hoping to find transport to a local hospital. Picture: Daily Maverick

Doctors in North West have broken their silence over the ongoing health crisis in the province, and are calling for urgent intervention to resolve the impasse which is placing millions of lives at risk.

In a “letter of concern” that has been sent to the Presidency, the national and provincial departments of health, and the North West premier’s office, nearly 100 doctors based in North West said that as caregivers they had been silent for too long.

“We have taken an oath to ‘do no harm’, and in our silence we have contributed to harm. This cannot go on as we are concerned about methods used which include closure of healthcare facilities that affect the health of our society,” the letter reads.

Members of the National Education Health and Allied Workers’ Union (Nehawu) have been on strike for over a month, protesting over several issues, among them a controversial R180-million contract awarded to Mediosa, a Gupta-linked company.

The strike action, according to the doctors’ letter, has resulted in the:

The doctors’ letter says the inclusion of calls for the premier to resign as part of this strike action is impacting on finding a resolution to the health crisis.

“The grievances of the striking employees are valid and supported, however the modus operandi is condemned, particularly the shutting down of health service provision,” the doctors’ letter states.

“There are talks with the union, first to allow the trucks that deliver medication to pass. We have also engaged law enforcement agencies to assist with direct deliveries,” North West Department of Health spokesperson Tebogo Lekgethwane said.

Millions of people’s lives are in danger as essential medication cannot be delivered to other depots and to health centres in the province as efforts to do so have been frustrated by striking union members who are blocking the trucks.

“Well, from our side it’s clearly a matter of failure to manage properly that has resulted in the whole crisis,” North West Nehawu spokesperson Patrick Makhafane said.

“It’s very bad that instead of resolving issues they have to resort to delivering services through soldiers. It’s a clear sign of acceptance of failure to manage.”

In a statement last week Stop Stockouts Project (SSP) said the organisation and other stakeholders were engaging the provincial as well as the national department of health to try to come up with a solution to the crisis.

SSP said 394 clinics in the province are unable to provide essential medicine to patients.

Several types of antibiotics and government-branded condoms were also not available to be dispensed.

SSP said its affiliate, the Treatment Action Campaign (TAC), had already started engaging with the national leadership of the labour unions involved to resolve the impasse.

The impact of the shortage of medication on the people is severe, especially for the poor who often cannot afford to go to private health practitioners.

Activists are concerned that the shortages would have a detrimental effect on mortality levels, and the quality of life of people with HIV and other chronic conditions.

A failure to take antiretroviral treatment consistently leads to drug resistance which limits treatment options for HIV patients in the future.

A lack of contraception would also lead to unplanned and unwanted pregnancies as well as raising the risk of sexual transmitted infections.

“They could think about even using whatever stocks are available from different provinces just to make sure that there is supply for now for patients who we know have gone a week without their medicines and that compromises their health.”

Muzenda raised concern, especially in relation to HIV patients. She said it was very important that their treatment cycle is not broken.

If somebody who is on HIV treatment does not take the medication for several days, resistance to the drugs begins to build.

“The next time you take that medication it might not work as good as it should. It could have health implications for you. Your immune system is compromised again. That is what we are concerned about,” Muzenda said.

Doctors Without Borders’ Sean Christie said that during the cause of the organisation’s outreach team’s work they came across an HIV positive child who did not have medicine.

“The child was in a really bad state and the parents were distraught,” Christie said.

Christie did not want to be drawn on administrative issues in the province possibly being the cause of the medicine crisis.

SECTION27 said the futile trips patients made to health centres only to find empty shelves was also a financial burden to patients. It is also a psychological burden as patients often have fears of involuntary defaulting on their treatment.

The doctors’ letter highlights risks for patients with TB, HIV and chronic diseases as well as those requiring emergency surgery or who were experiencing high-risk pregnancies.

“Many psychiatric patients are not being treated, which may make Life Esidimeni numbers look insignificant,” the letter reads.

Though the problem is currently most prevalent in North West, the province is not the only one to experience stockouts.

SECTION27 said it was closely monitoring the situation in other provinces, but said Mpumalanga also has shortages. In the past stockouts have been experienced in the Northern Cape and Gauteng.

To address the shortages facility managers at health centres in North West are sharing medication between patients so that they at least have some medication.

According to the project, staff at the centres have low morale as they are unable to provide for their patients’ needs.

Those who are able are being encouraged to buy their medication privately.

“Maladministration has played a huge role in everything that is happening there,” Gonyela said.

SSP said the organisation and other stakeholders were engaging the provincial and national departments of health to try to come up with a solution to the crisis.

Spokesperson of the SANDF Brigadier-General Mafi Mgobozi confirmed that from Sunday morning they had deployed staff to assist in providing healthcare and also staff to safeguard medical supplies. DM