Taking the fight against apartheid’s bankers to their backyard 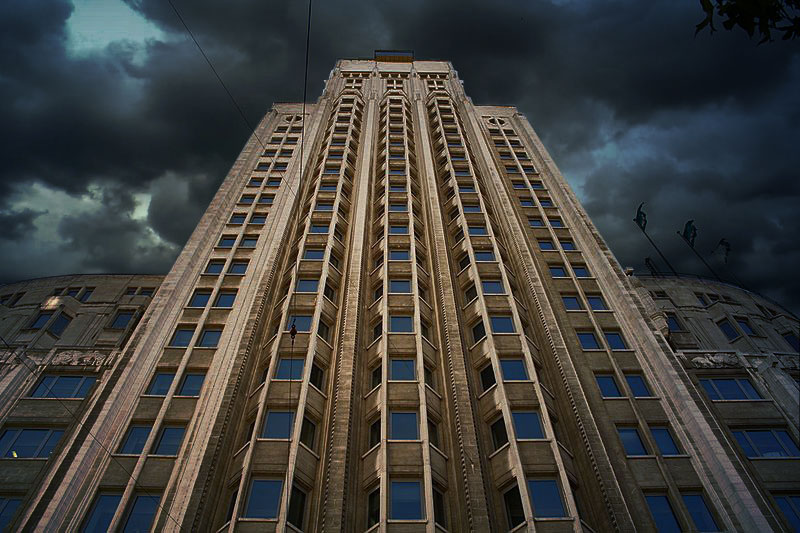 Global corporations which propped up the apartheid regime and profited in return have not been held to account. This remains a central challenge in terms of the unfinished business of South Africa’s transition to democracy. Starting on 24 April, as South Africa prepares to commemorate 24 years of democratic rule, Open Secrets and the Centre for Applied Legal Studies (CALS) will be submitting a complaint to authorities in two countries regarding the role of European banks in aiding and abetting the apartheid regime. This is one step of many in demanding accountability from those corporate profiteers who benefited from injustice in South Africa. By Khuraisha Patel and Michael Marchant.

Who are the banks and what did they do?

Apartheid was a militarised state at war with South Africans and its neighbours. Many international banks were in the war by funding the regime and its military through credit. Yet it was a Belgian bank, Kredietbank (KBC), and its subsidiary, Kredietbank Luxembourg (KBL), that were at the centre of an apartheid money laundering machine that kept the war machine running. The state needed to purchase weapons but faced compulsory United Nations arms embargoes at the time – and it thus needed a secret way to send money to international weapons suppliers without the transactions being traceable.

To meet this need, KBL and KBC helped state-owned arms company Armscor establish a global money laundering network of secret bank accounts and shell companies in order to bust the arms embargo – we call it the “arms money machine”. In return, the banks reaped massive financial benefit. They are financial behemoths today, with KBC recording a market capitalisation of $25-billion (over R300-billion) in 2018.

Based on the evidence we gathered in researching the book Apartheid Guns & Money: A Tale of Profit it is clear that this machinery included over 800 secret bank accounts and over 100 front companies registered in Panama and Liberia, most of which were set up or held by the banks in question. The numbered accounts and front companies made it difficult to track the apartheid state as the real arms purchaser.

The struggle for corporate accountability

One of the reasons that the role of Kredietbank and KBL has so long remained hidden from the public is because of the failure to investigate and hold to account corporations that aided the apartheid regime. South Africa’s Truth and Reconciliation Commission did far too little to shed the spotlight on corporate accomplices of the regime, rendering their crimes largely invisible in the broader narrative on the crime of apartheid. As a result, we know comparatively little of the corruption and sanctions busting that funded apartheid’s police state, and that facilitated the mass theft of money from the public purse. 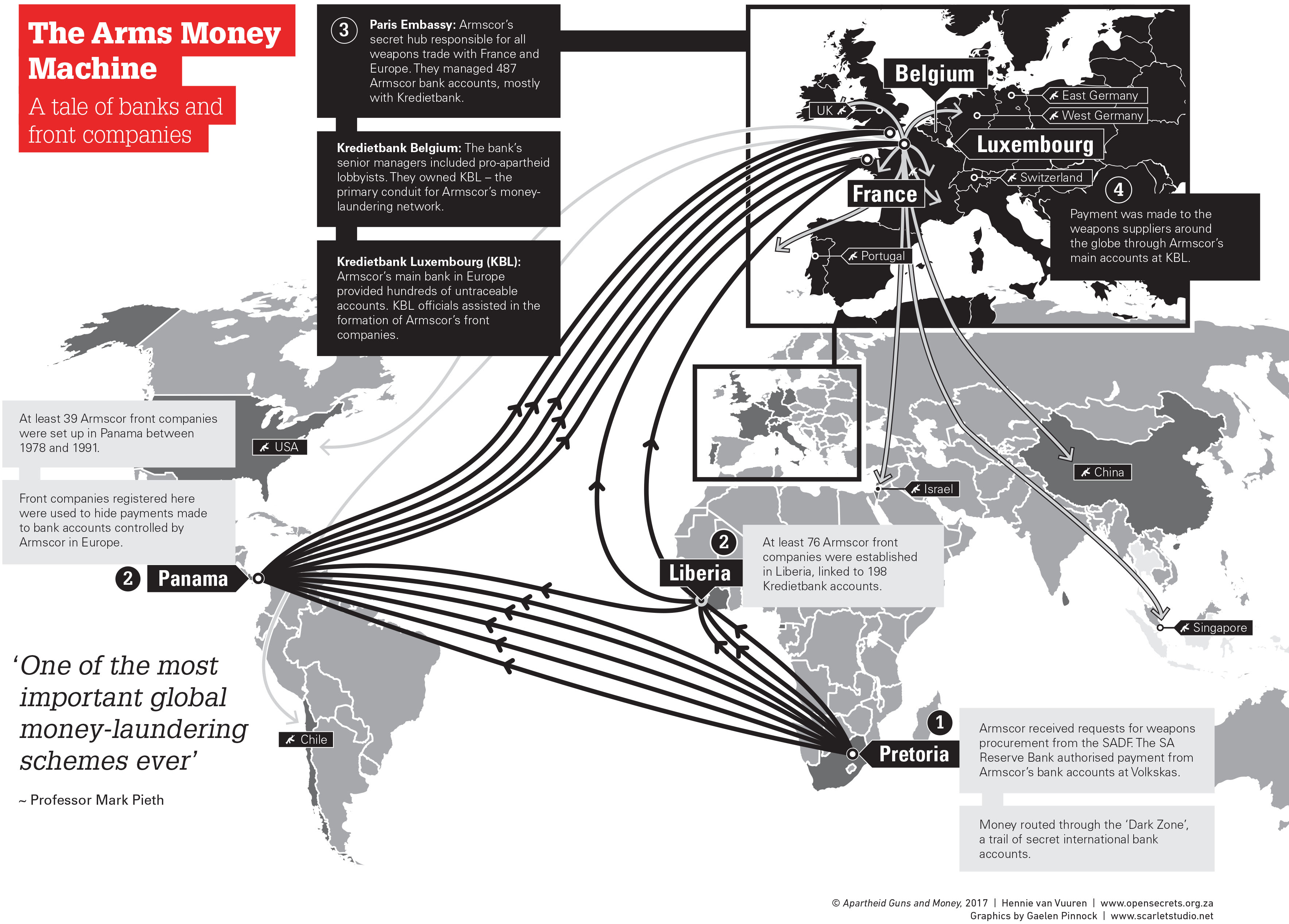 This failure is not unique to South Africa or its transition. Powerful multinational corporations, often banks, escape proper investigation and sanction around the world for their economic crimes and complicity in grave rights violations. The countries where these powerful companies are headquartered show little appetite for accountability despite public commitments to human rights. These gaps in accountability frameworks to hold corporations to account remains a serious obstacle to efforts to achieve justice in South Africa and around the world.

Why an OECD Complaint?

The Organisation for Economic Development (OECD), a club of rich nations, has adopted one of the few international mechanisms to hold corporations responsible for their business conduct. They are called the OECD Guidelines for Multinational Enterprises and set out voluntary standards intended to prevent multinational corporations’ activities from contributing to human rights violations. In the language of the guidelines, they are “intended to encourage the positive socio-economic contribution of corporations while limiting the adverse impact of their operations on society”.

To encourage compliance, the guidelines have a built-in implementation mechanism set up in each member country called a National Contact Point (NCP). Non-governmental organisations, individuals and governments can lodge complaints against corporations for their non-compliance with the Guidelines. The NCP can then make a finding and issue non-binding recommendations to the corporation that will allow it to remedy its conduct and make reparations. Open Secrets and CALS are lodging this complaint with the NCPs in Belgium and Luxembourg and asking them to make a finding on the conduct of both KBC and KBL.

It is clear that the OECD mechanism alone is not sufficient and often lacks the real teeth required of regulations determined to deliver accountability. Nonetheless, in a context of a dearth of remedial mechanisms for corporate crimes, particularly crimes of a historic nature, we must utilise all of the tools at our disposal. This is an opportunity to publicly challenge authorities in Europe to grapple with the conduct and harm perpetrated by their corporations, and to show that the mechanisms they tout can be effective.

Open Secrets and CALS claim that by helping to create the “arms money machine”, KBL and Kredietbank were complicit in the crime of apartheid. In so doing, they acted in contravention of a series of OECD guidelines. First, the banks had a duty in terms of the guidelines to act in accordance with the general policy objectives of their member countries and in line with the host state’s international obligations. Luxembourg and Belgium committed to supporting the arms embargo in order to end apartheid in South Africa. Yet, by providing loans and setting up a money-laundering system, the banks clearly contravened their states’ objectives.

In addition to this, the banks failed to meet the guidelines’ disclosure requirements that encourage transparency about the source and use of their funds. Not once did KBL and Kredietbank disclose the nature or extent of their relationship with the apartheid regime and how much money they made off it. Finally, we argue that the banks’ conduct amounted to “improper involvement in local politics” as the evidence shows that their assistance was in part motivated by their then chairperson, André Vlerick, a former Belgian Minister of Finance who was ideological committed to ensuring the continuation of white minority rule in South Africa – and awarded with South Africa’s highest honour by PW Botha in return.

For this conduct, we call on the NCPs to make a finding that KBL and Kredietbank violated provisions of the OECD Guidelines through their support for apartheid, and to motivate both the banks and Luxembourg and Belgian authorities to issue an apology to the South African government and people. We also implore the NCPs to recommend a more effective, binding mechanism to hold financial institutions responsible for their conduct.

The failure to hold corporations accountable for aiding and abetting apartheid has undermined efforts to make South Africa a more just and equitable society. Not only has money not been recovered, nor reparations paid, but South Africa has to pay back this odious debt with little understanding of the role of powerful corporations in the crimes of our past and present.

Submitting the OECD complaint serves as a first reminder to corporations and other private actors that we have not forgotten their historic crimes. We will continue to demand accountability for their complicity in rights violations, be it past or present. DM

Marchant and Patel are Researchers at Open Secrets