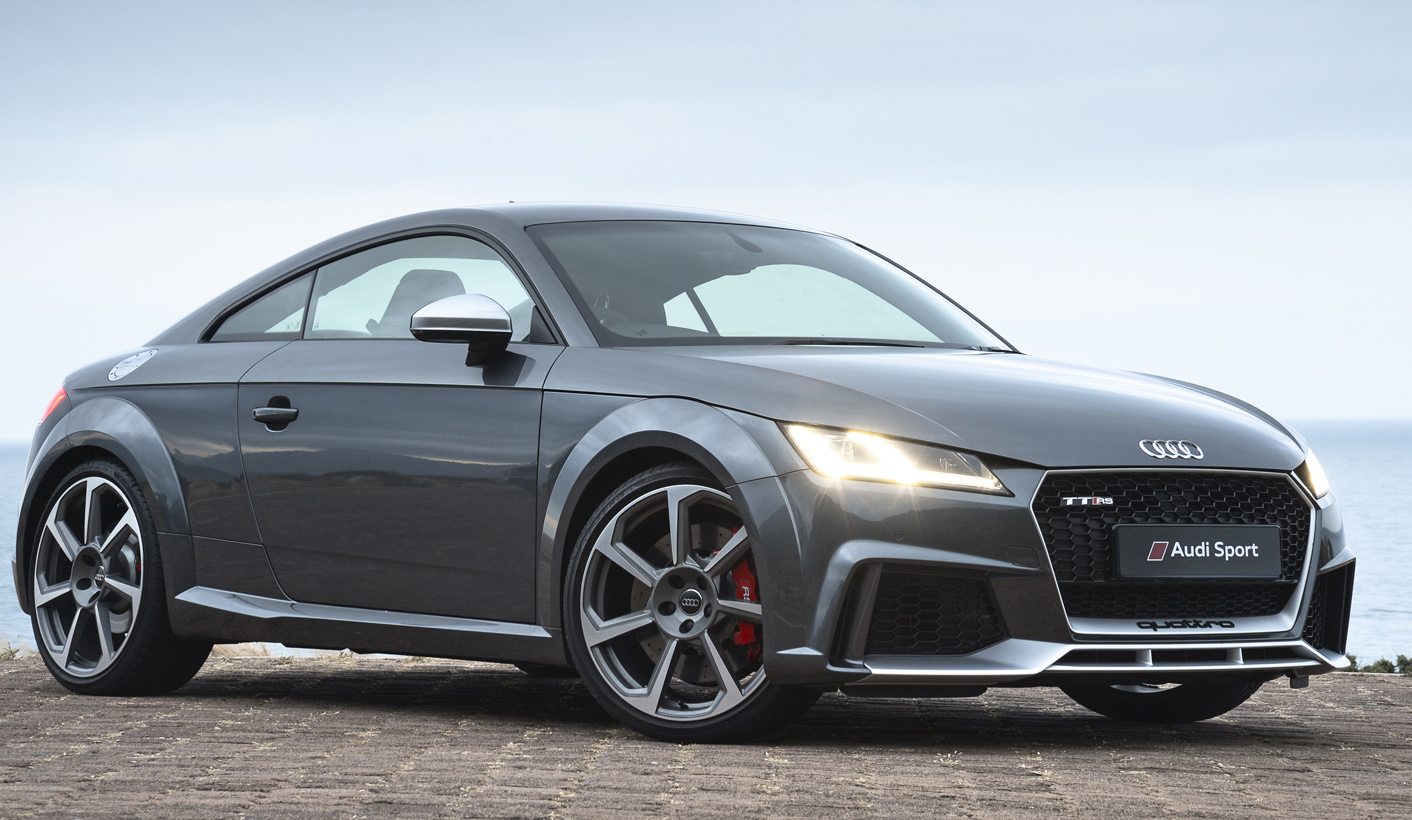 The Audi TT has an undeserved reputation as a sports car for poseurs, rather than being the real deal. While the entry-level model may be relatively tame, the TT-RS demands respect – and rightly so. By DEON SCHOEMAN.

The Audi TT is all too easily damned by the faint praise of its “designer” status. It’s a handicap that harks back all the way to 1995, when the TT made a sensational debut as a concept car at the Frankfurt Motor Show.

Nobody expected the clean, almost Bauhaus-inspired aesthetic of the concept to survive the transition from fantasy to reality. But when the production model arrived three years later, it retained all the key elements of the concept.

No wonder the TT was soon saddled with a designer label that tended to overshadow its sports car capabilities. And while the two-door became sharper and keener over successive generations, it continued to be tainted by that same designer brush.

Of course, it has to be acknowledged that the TT shares the mainstream underpinnings of mass-market models such as the VW Golf and the Audi A3, which makes it more accessible, but also hampers its recognition as a sports car in own right.

Which brings us to the Audi TT-RS. As the most hardcore expression of the TT formula, its task is not only to showcase what the two-door coupé is capable of in sheer dynamic terms, but perhaps to prove that there’s a lot more to a TT than designer lines and a pretty face.

For exactly that reason, it’s a good thing that the TT-RS isn’t pretty. Striking, yes – and aggressive, definitely. It ripples with RS-inspired muscle, suggesting something a lot wilder, a lot more challenging than your typical, vanilla TT.

The gaping air intakes on either side of that snarling grille are too hungry, the stare of the LED headlights too stern, the presence of those huge alloys and gumball tyres too imposing, to translate into something merely easy on the eye.

A recessed TFT screen replaces conventional instruments with a configurable array of virtual dials and displays that can include power and torque graphs, in addition to information on speed, rev count, oil temperature and turbo boost.

The TT-RS doesn’t get a separate screen for its infotainment system, but uses the same display to show and control everything from Bluetooth telephony and audio streaming to satnav and the multispeaker sound system.

The biggest surprise is the level of practicality on offer. The small, sculpted rear seats are strictly for toddlers only, but fold them flat, and the resulting luggage space is capacious even by normal hatchback standards, with the added bonus of a large tailgate that opens wide to offer easy access. You can fit a racing bike in there – really!

The RS badge signifies more than just bespoke exterior and interior details, though. You’ll find the really important stuff under the skin, starting with the engine bay (as it should) where one of Audi’s most evocative engines has pride of place.

The five-cylinder mill is the marque’s latest take on the in-line five-cylinder layout made famous by the legendary World Rally Championship-winning Group B Audi Quattro’s power plant many moons ago.

If greatness was measured in aural terms, then this engine is right up there with the very best: it starts with a growl and a splutter, filling the cabin with glorious, angry noise before settling down into a begrudging idle.

It’s a sound rich with the promise of adrenaline and excitement – and that’s before you chase the needle around the rev counter. Once on the move, downshifts are punctuated by the exhaust’s angry spit and crackle, while chasing it towards the red elicits a hoarse but gleeful roar.

The stats confirm the engine’s talents: 294kW and 480Nm make this the most powerful TT yet. Both torque and power are spread across broad rev bands, guaranteeing generous lashings of urge, regardless of gear or engine speed.

Quattro all-wheel drive has also come a long way since those early rally days. Back then, leaden steering response and terminal four-wheel under-steer were the penalty you paid for the extra traction.

Today, the TT-RS uses a multiplate clutch-based quattro system and intelligent electronics to seamlessly vary power between the front and rear axles, and even prioritising individual wheels with the most traction. As a result, the steering remains communicative and accurate, even under full throttle.

The only Achilles’ Heel in this ensemble is the gearbox. Audi’s S-tronic is a dual-clutch transmission that doesn’t require the use of a clutch, and is operated either in full auto mode, or via shift paddles behind the steering wheel.

In the TT-RS, the shifts are lighting-fast and fluid – as long as you’re driving with vigour. At slow speeds in urban traffic, shifts between first and second gears are clunky and indecisive, with the electronics often seeking to override manual selection.

The TT-RS looks fast, and feels even faster. Quattro means there’s no wheelspin off the mark, either. Floor the loud pedal, and the Audi hunkers down for a millisecond before launching off the mark with rocket-like thrust.

Acceleration is in the supercar league: the 0-100km/h sprint time is an astounding 3.7sec, and top speed is limited to 250km/h – which the TT-RS reaches with almost laughable ease. An optional upgrade raises the limit to 280km/h, although it’s hard to think of a real-world situation where that velocity would have any real application.

Instead, it’s the midrange cut and thrust of the TT-RS that will blow your hair back. Drop from sixth to fourth gear, bury the accelerator, and the TT-RS will snap your head back against that high-backed seat with chiropractor-like glee, while blurring the landscape.

The ride is taut enough to be considered uncompromising on less ideal surfaces, but not to the detriment of the coupé’s composure. It treats fast, flowing corners with impeccable precision, remaining resolutely on the chosen line, and achieving the kind of lateral G-forces that feel more akin to aerobatics than road driving.

Easily overlooked but vital in the context of the TT-RS’s considerable performance potential are the brakes: huge 370mm perforated steel discs with eight-pot callipers provide the stopping power up front, supported by 310mm solid rear discs.

If I have a criticism of the TT-RS, it’s that it feels more uncompromising than the RS3 Sportback and RS3 Sedan it shares its platform with. The latter two manage to link similarly impressive dynamics to a modicum of comfort.

Not so the TT-RS. It’s not only one of Audi’s quickest cars (you’ll need to opt for the exotic, V10-powered R8 to go faster), but it’s a sports car thoroughbred, designed with pure performance in mind.

It’s not designed for relaxed, long-distance journeys, but at its best when your road trip consists of a cleverly planned succession of quiet country roads and taxing mountain passes. That’s where the TT-RS shines at its brightest – and the driver’s grin will be widest, too!

Most of all, the TT-RS should lay to rest any accusations that the Audi TT is nothing more than a designer A3 with a fancy price tag.

Yes, the TT-RS operates in supercar territory, and for a lot less money than your typical exotic. But it also serves as a reminder that even a straightforward TT Coupé musters a lot more sports car talent than most will give it credit for.

And day to day, the entry-level TT may well be the more consistently enjoyable car to drive. DM

Convincingly takes on the supercar league in performance terms.

Likely to be too uncompromising for many.