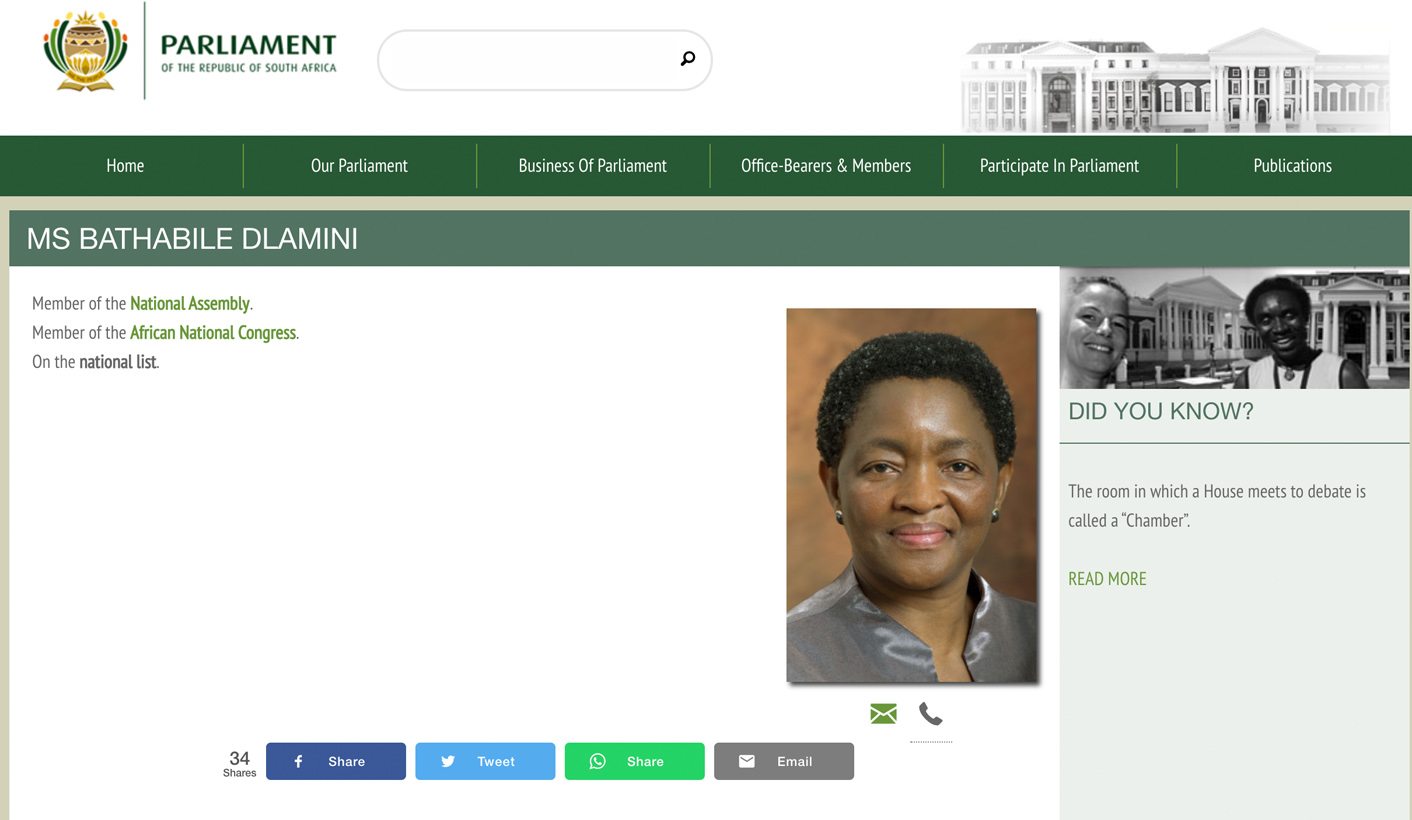 The people’s assembly, Parliament, has a constitutional responsibility to “facilitate public involvement in the legislative and other processes of the Assembly and its committees”. Its mission statement says it aims to offer “an opportunity for South Africans to participate in the decision-making processes that affect their lives”. The question is how? There appears to be a predilection for mediated, events-based initiatives such as oversight visits, the annual Taking Parliament to the People, or calls for public comment in the legislative process. Parliament’s website is at best unhelpful. By MARIANNE MERTEN.

Much information has disappeared from Parliament’s website over the past 18 months or so, and some of it has been rejigged into areas where it makes little, if any, sense. It’s been about 15 years since the publication of the Parliamentary Directory, a widely distributed handbook produced by Parliament’s public education office.

It included not only a clear, easily understood overview of Parliament, its committees alongside the law-making process, but also listed parliamentarians and their contact details – from offices, cellphones and emails to exactly where to find them in their constituencies, and whose addresses and telephone details were included.

Not too long ago, an MP’s profile on Parliament’s website used to include a photo, political party membership, an office telephone number and, on the rare occasion, even a cellphone number, a personal email address, constituency contact details – although that section often was left blank – and that year’s declaration of financial interests.

Today, little of that is left beyond the photo, a link to an email address (it requires the right set-up; if not, forget about sending that email through the website link), Parliament’s general switchboard number and what committee the particular MP serves on.

Even armed with sufficient data, which is problematic for millions of South Africans, it takes patience to find information about Parliament or an MP.

Yes, under the category “Office Bearers and Members”, there are links to “all members”, “members of the National Assembly” or “members of the National Council of Provinces”. But click on any of these and forth spews a list of names – no photo, no political party affiliation, no committee membership. Nothing. It means you need to know whom you’re looking for to find them.

There is a category called “Participate in Parliament” and it does include a “Contact your member” section, but it simply provides Parliament’s PO Box address and general switchboard number.

This arises in no small way from South Africa’s electoral system, in which voters cast their ballots for a political party that determines its candidates for public elected office through its own internal party processes. But matching MPs to constituencies, to establish a connection between elected representatives and citizens, has been there right from the start of the democratic Parliament.

Mondays in the parliamentary calendar are constituency days – Parliament’s website elsewhere describes constituency work as an MP’s “greatest opportunity to conduct individual oversight” and the “closest form of interaction between Members of Parliament and the public” – and recently MPs agreed to take an extended 10-week mid-year constituency period.

While Parliament transfers tens of millions of rand to political parties to run their constituency offices, the only requirement for the release of the four annual tranches appears to be the regular submission of financial statements.

The ANC in Parliament is currently auditing its constituency offices as it is designing its own website to feature MPs’ biographies and contact details, including cellphones, and those of their constituency offices. But right now, while there is an occasional hint of a constituency office address and contact number, its list of ANC MPs includes many who have long left the national legislature, features some as ministers when they are not, and does not include others.

The DA has a system of constituency managers, though none of those details are readily available on its website. Acting effectively as gatekeepers, these constituency managers channel public queries and the like to a relevant MP. However, if the MP to contact is known, the DA website does provide a personal email address and cellphone number.

The EFF website also features no constituency offices, but the contact details of their national and provincial offices are a starting point for someone who’s determined.

A quick survey of parliamentary websites elsewhere in the world and the level of information, and how this is organised, on South Africa’s national legislature website falls short. Even with consideration of the different electoral systems based on constituency or electoral district elections and an MP’s right not to toe the party line.

In Germany and Finland MPs are not only featured on their respective parliamentary websites, but have their own internet pages accessible from the official parliamentary site. The English websites of the Bundestag and the Eduskunta, like those of Britain’s House of Commons and the Scottish Parliament also list MPs’ motions, statements in the House, written and oral questions (and the relevant replies) and, if applicable, how an MP voted in a particular matter. That’s alongside minutes and transcripts of proceedings, official records and links to relevant laws and, where applicable, their countries’ constitutions.

Every MP has a photo, short biography and telephone and email contacts, with details of where to find them in their constituencies and links to their respective political parties. Where applicable, the MP’s financial disclosures are also listed although the Finnish parliament’s website only does so in the Finnish language pages, not the English ones, under “sidonnaisuudet”.

The French parliament and the Turkish Grand National Assembly, despite not quite getting comprehensive English websites up and running, clearly feature their deputies, as MPs are known there, with email, telephone and street contact details provided.

The German, Finnish and UK parliamentary websites also feature details on MPs’ salaries and allowances alongside their parliament’s international engagements and the fluffy stuff – from art and parliamentary buildings to visiting the legislature. All in common sense categories, including a separate one for the budget on the German and Finnish English-language sites.

It’s unclear why South Africa’s Parliament website is only available in English when the Constitution recognises 11 official languages. And how what information is available is organised is like peeling back the layers of an onion.

There is a category called “publications” which features question papers, but not the actual replies – ministerial written replies to parliamentary questions seem untraceable – and transcripts of sittings. But Parliament’s record of work, the Announcements, Tablings and Committee Reports (ATC), is found under parliamentary papers in the “business of Parliament” category.

There is information on the Budget – traditionally the second term in the parliamentary calendar is dedicated to Budget votes – but it’s in the “publications” category under the section “educational publications”, together with a PDF of an Africa Day poster and other topics such as the State of the Nation Address and human rights.

There is information on parliamentarians’ declaration of interests, which include gifts over a certain value, directorships, sponsorships and shares. The link, however, goes to a PDF of the 2016 register of members’ interests. It is not searchable by name.

Questions arise as to why ministers and their deputies are double-featured, once as MPs and then again as representatives of the executive under the category “Office Bearers and Members”. Perhaps it’s protocol fixation, but it has introduced errors.

While Parliament’s webpage on Communications Minister Nomvula Mokonyane is left blank – she’s not an MP, being one of the two constitutionally permissible appointments from outside the national legislature to Cabinet – the page of the other such appointment, Mineral Resources Minister Gwede Mantashe, states that he’s a member of the National Assembly. He’s not.

The president, correctly, is not listed at all on Parliament’s website as he resigns his parliamentary seat on election by the National Assembly in line with Section 87 of the Constitution.

So, Mokonyane’s contact details are still from when she was water and sanitation minister, the only Mantashe to be found is a secretary, and Blade Nzimande is still listed as higher education minister, a job he lost on 17 October 2017 when then president Jacob Zuma executed his final reshuffle. President Cyril Ramaphosa reshuffled the Cabinet shortly after being sworn in as president in February.

A civil society initiative, the People’s Assembly, provides much more detailed information, and not only on Parliament’s activities beyond the official statements. Available are an MP’s declaration of financial interests over several years, speeches in the House, contact details at Parliament, often including cellphone numbers, and details of constituencies that can be traced through the rep locator.

Given the constitutional founding values of accountability, responsiveness and openness, which also feature in the national legislature’s publicly stated values, all this really should have been done by the people’s assembly – Parliament. DM