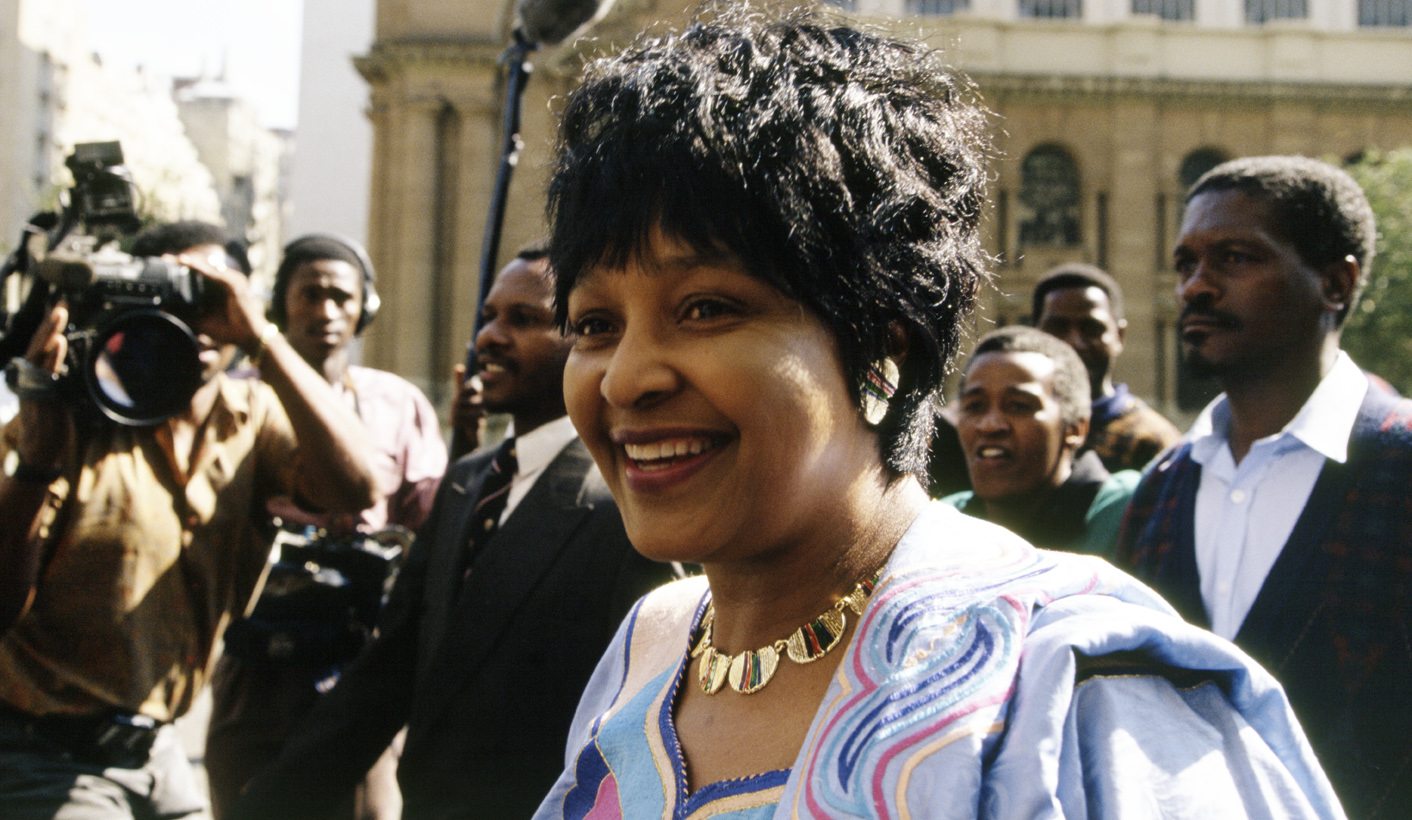 The 2017 documentary ‘Winnie’, to be broadcast on eNCA on Wednesday evening, tells a side of the Winnie Madikizela-Mandela story which is rarely heard. Former apartheid security operatives openly tell the camera how they worked to plant negative stories about Madikizela-Mandela in the national and international media – and the pressure that was exerted on Nelson Mandela and the ANC to cut ties with the “Mother of the Nation”. By REBECCA DAVIS.

Former Security Branch operative Vic McPherson sits in a sunny garden patting his dog. He addresses the camera , recounting his experience of arresting “terrorists” – by which he means ANC members – with an occasional self-satisfied grin.

In 1989, he explains, he was charged with running the apartheid government’s covert strategic communications (Stratcom) operation.

“I had 40 journalists working directly or indirectly for me,” he boasts.

Stories planted by McPherson and his team would routinely end up on the front page of newspapers. And their major target: Winnie Mandela.

McPherson is the most chilling presence in filmmaker Pascale Lamche’s 2017 documentary Winnie, and his contributions to the film are some of the most eye-opening.

Alongside McPherson’s revelations sit those of former national intelligence head Niel Barnard and former Soweto police head Henk Heslinga. Between the testimony of the three, the story of how Winnie Madikizela-Mandela was systematically targeted and discredited both by the apartheid government and the new ANC dispensation slowly takes shape.

documentary has a distinct bias: it is unashamedly pro-Winnie. But after hearing the remarks of the apartheid spooks on camera, it is hard to imagine how any filmmaker could come to a drastically different conclusion.

Barnard explains how he bugged the home in which Nelson Mandela was kept under house arrest in Paarl in 1988, and rapidly came to an understanding: “We have a problem with Winnie.”

Madikizela-Mandela was a threat: a woman who was adored by the masses, ungovernable in the face of and appeared to share little of her husband’s belief in peace at all costs.

The murder of Stompie Seipei in 1988 was – to put it crassly – a gift to the apartheid state. In a move unprecedented for a political funeral, the government placed zero restrictions on media coverage or public attendance of Seipei’s burial. Thereafter, graffiti appeared around Soweto: “Release Nelson Hang Winnie”; “Swop Nelson for Winnie”.

Given the overtime worked by intelligence operatives to foster a narrative of controversy around Madikizela-Mandela, the origins of such graffiti are highly questionable.

In one of the documentary’s most memorable scenes, McPherson tells the camera that he had a documentary made about Winnie through his SABC plants which shown in America on 40 channels.

“It led to her being declared an international terrorist,” McPherson says, with a sly smile of triumph.

As a result, Madikizela-Mandela was unable to accompany Nelson Mandela on his tour of the USA following his release.

film does not delve deeply into the circumstances around Seipei’s murder, but it makes it clear that responsibility for the death was placed at Winnie’s feet largely as a result of the deeply unreliable (and changing) testimony of witnesses including self-confessed police informant Jerry Richardson.

McPherson’s work to discredit Madikizela-Mandela did not end only with painting her as a murderer as widely as possible. It appears that he was also responsible for planting in the press the notorious love-letter written by Winnie to lawyer Dali Mpofu, which helped precipitate the end of her marriage to Nelson Mandela.

The documentary suggests that Mandela was given an ultimatum by the ANC: if you want to be president, divorce Winnie.

It was following the divorce that one of the most shameful episodes in Madikizela-Mandela’s life when she was barred from sitting on the stage with other VIPs at Mandela’s inauguration. Her biographer, Anne Marie Bezdrob, suggests that the reason was simple: Mandela’s “ego was dented”, she says.

The film does not demonise Nelson Mandela; for once, he is simply not the focus. But it does suggest that he allowed himself to be influenced by both the outgoing apartheid government and the incoming ANC leadership into progressively pushing Madikizela-Mandela aside.

It was not apartheid forces but the new ANC government which is fingered as wanting to implicate Madikizela-Mandela in further crimes after the transition to democracy. Former Soweto cop Henk Heslinga tells the camera that he was summoned by South Africa’s first democratic safety and security minister, Sidney Mufumadi, and asked to compile criminal evidence against her.

The documentary features some of the last in-depth interview footage of Madikizela-Mandela before her death, in which the overwhelming impression she exudes is one of deep sadness and betrayal.

Her appearance before the Truth & Reconciliation Commission (TRC) was clearly one of the greatest sources of of her life. At the commission, Madikizela-Mandela was implicated in four assaults and six murders.

“I was being humiliated to prove I was not fit to be [Mandela’s] wife,” Madikizela-Mandela believes.

Her subpoena to appear before the TRC was served just days before the ANC’s national conference – with the possibility of her becoming the ANC’s deputy president torpedoed.

It was also a source of enormous resentment to Madikizela-Mandela that she was begged to apologise at the TRC by Archbishop Desmond Tutu.

“I was seething with rage,” she says candidly.

Such words are akin to heresy in a country where Tutu is viewed in a saintly light. But when one considers the vilification of Madikizela-Mandela juxtaposed with the scenes of her former apartheid tormentors still happily sitting in sun-drenched gardens, it’s hard not to understand her anger.

The days following Madikizela-Mandela’s death have seen her legacy endlessly unpacked, often with unflattering conclusions. For the sake of justice to a woman often treated unfairly in life, Winnie should be compulsory viewing. DM

Winnie will be broadcast on eNCA on Wednesday 11 April at 21:00.

Note: This article has been amended with the correct broadcast details.

Photo: Winnie Mandela during her trial in connection with the murder of child activist Stompie Sepei 1991/2 in Johannesburg, South Africa. She was not found guilty. (Greg Marinovich)