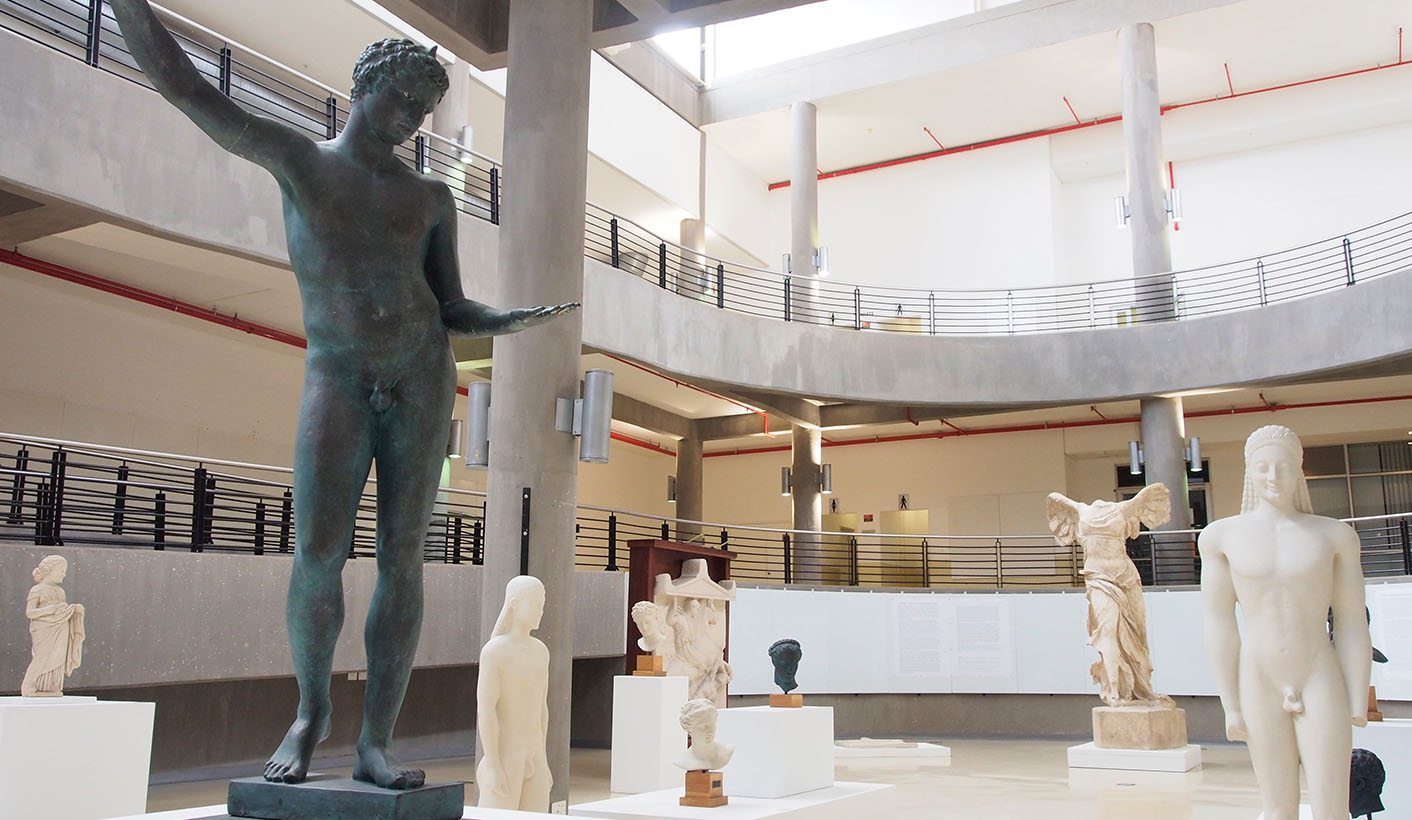 The Recast exhibition poses questions about relevance in relics and about what room, if any, there is in modern-day South Africa to include a reference point for art history rooted in western ideals or what’s embodied in the sculptures: an ode to classical Greek traditions as a pinnacle of human civilisation. By UFRIEDA HO.

There are many ways to die if you’re a piece of art: turned to dust in a storeroom, killed off by capricious whim, or suffocated to death by a historical framing.

It sums up one part of the story of 25 plaster casts of classical Greek sculptures owned by the University of Johannesburg. It’s one of the most intact collections of its kind in South Africa but has remained hidden for over 40 years in the university’s obscured corners and spaces in the margins.

Now they’ve been dusted off and gathered together in the atrium of the FADA (Faculty of Arts, Design and Architecture). They stand as striking treasures. Among them is the full-size cast of the headless but winged and strident Nike of Samothrace (the original stands in the Louvre) and the armless Venus De Milo with its curved torso and plaster draping only just covering her behind. There are also reliefs and statues of nude male youths, typical of the archaic Greek period. But, they’re gathered for more than mere display.

Photo: The striking full cast of the Nike of Samothrace dominates the Recast exhibition. The original is housed in the Louvre in Paris. Photo: Ufrieda Ho

Placed under the spotlights of a curated exhibition they are under the deliberate and necessary glare of defining what a transformation agenda might look like.

The exhibition, called Recast, is curated by Professor Federico Freschi. It poses questions about relevance in relics and, about what room, if any, there is in modern-day South Africa to include a reference point for art history rooted in western ideals or what’s embodied in the sculptures: an ode to classical Greek traditions as a pinnacle of human civilisation.

Freschi, executive dean of FADA, stumbled on the university’s sculpture collection when they underwent routine restoration in 2016.

“I was struck that we had this intact collection of sculptures. Traditionally they were regarded in art schools as high points of western art history but they are objects implicated in exclusionary, elitist histories,” he says.

The majority of the works were donated to the university when it was RAU (Rand Afrikaans University) by members and association of the South African Greek community. They formed part of a 10-day Greek cultural festival in 1977 that was co-hosted by the university that year. It would have taken place just months after the Soweto Uprising in June the previous year. The close chronology speaks volumes to how far apart reality was for blacks and whites in a time of state-engineered social division.

Photo: The lower atrium of UJ’s FADA has been filled with sculptures that have been ‘recast’ not just as objects but as opportunity to have different discussions. Photo: Supplied

“Art history is no longer taught in this way. Taste and interest in classical sculpture in universities, art schools and museums around the world has also fallen off dramatically since the mid-twentieth century, but I was interested in how a new generation of students, with fresh eyes, would respond to these objects of classical tradition and how these sculptures might add to the debate around decolonising education,” he says.

Higher learning institutions have become the epicentre of the fallist movement in South Africa. Statues across campuses in particular are reminders of deep hurt and inequality and as such have been targets to be knocked off their plinths. Recast though invites a different kind of engagement, a possibility, as Freschi says: “Instead of relegating the UJ casts to the dustbin of discarded ideals, to pause to consider what we might learn from them.”

And “might” is a keyword. He points out that there are no firmed up, single answer. There are even contradictions in the sculptures themselves. The sculptures have intrinsic material value but are fakes, mere copies of priceless originals. They also tell a story of ancient time, but hold up a mirror to what constitutes our modern lives.

The exhibition closes on Wednesday with a seminar that explores these ideas further and will be led by Professor Grant Parker who is a South African-born professor of classics and chair of department at Stanford University.

Photo: Kouroi, or free-standing sculptures of male nudes, were typical of the Greek archaic period. In the Recast exhibition they pull a thread from the past through to today about art history’s shifting values and interpretations. Photo: Supplied

For Parker, the sculptures raise questions about whiteness and blackness and also how this is interpreted in a current-day context even though it doesn’t correspond to how colour is written about in ancient text.

Parker says: “Recast is an opportunity to rethink assumptions and the limits of a phase in which we’re seeing racial identity being essentialised, quite different to how we spoke about non-racialism in the 1980 and 1990s.

“The UJ statues are also symbols of loss, displacement and the transition of memory,” he says.

It’s about what’s lost in generational transmission, also what endures. They reveal what community insiders choose to present to community outsiders and how a collective memory is constructed then maybe also abandoned.

It’s why Parker, like Freschi, doesn’t cast the sculptures as mere objects or history’s castaways. Parker calls the sculptures misfits and triggers and therefore can be useful to spark a different dialogue, relevant for South Africa today.

In 2017 Parker wrote in one of his published works: “Far from being the mere handmaiden of colonialism (and later apartheid), classical antiquity has enabled challenges to the South African establishment, and provided a template for making sense of cross-cultural encounters.”

Recast as an exhibition that makes its own statement. It’s bold and deliberate standing as clear targets for criticism but also moderate and inoffensive in their remoteness and anonymity. It’s another juxtaposition that makes these 25 pieces of artwork, disentangled and demystified in this way, a consideration that moulds of thinking and being can be broken even as statues and sculptures stand. DM

Photo: UJ’s collection of Greek sculptures are a story of blackness, whiteness, the modern and the ancient, making them ideal triggers for more current debates, according to exhibition curators. Photo: Supplied