Op-Ed: Public Disruptions and Intimidation of Journalists – it all seems so familiar 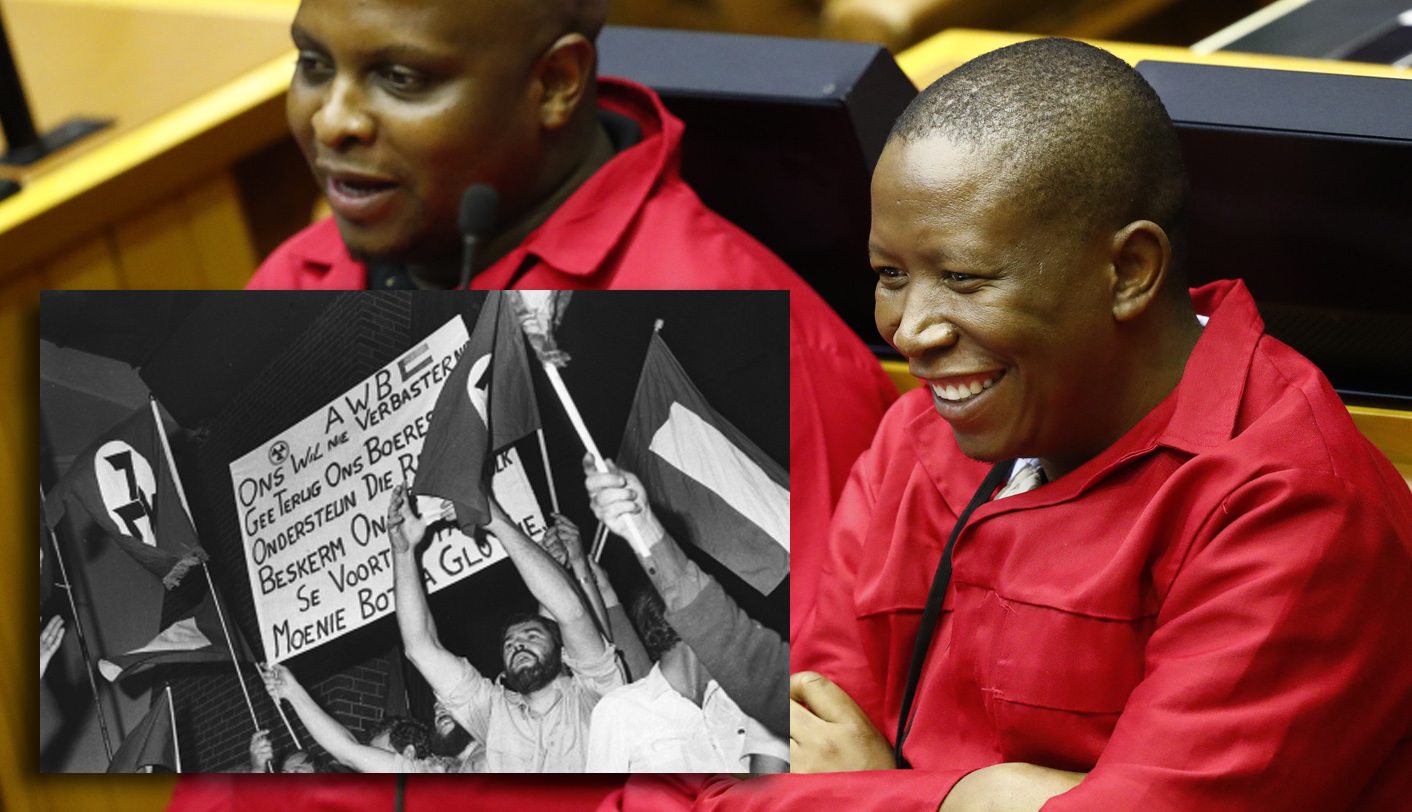 The EFF’s behaviour has come to resemble a public degrading ritual so reminiscent of fascist behaviour, followed by sanctimony, fake regret and drawing on senses of victimhood. By ISMAIL LAGARDIEN.

Several years ago, during a blistery Minneapolis snowstorm, I walked into a public library with a cup of coffee. I found a desk in a corner on the first floor, next to a window where I could watch the snow fall. At the desk next to me sat a woman, reading quietly. I asked her, in a whispered tone, if I were allowed to bring a cup of coffee into the library. She winked and smiled, and said:

“It’s always easier to ask for forgiveness than for permission.”

I never did spend much time thinking about that; not until the intimidation and harassment of a journalist in the parliamentary precinct earlier this week, and the apology from the aggressor, Floyd Shivambu. I recalled how often Julius Malema, leader of the Economic Freedom Fighters (EFF) apologised for the outlandish and offensive things he had said or done.

I also recalled the time when a taxi drove on a city pavement (in Pretoria) slipped back onto the road, to the front of a line of cars, then ran a red light along with several other minibuses. On the back window of one taxi was a sign: “Askies” (Excuse me). More recently, several taxis drove on an embankment where the M7 tangles and twists with the NI in Cape Town, before snaking towards Koeberg Road in Milnerton. Written on the back of one taxi was a sign: “Sorry, neh”.

This week, after Shivambu apologised the intimidation of a journalist, I remembered what the woman in the Minneapolis library told me. I also remembered all the times I saw a taxi driver apologise after breaking the law for the nth time. Yes, it is “easier to ask forgiveness than for permission”. Begging forgiveness tugs at the heart. And when we forgive, it makes us feel like better humans. The villains move on to the next violation….

The point about Shivambu’s intimidation is that the deed has been done. The EFF had sent what are, by now, their customary messages of aggression, intolerance, violence and intimidation. More fear has spread. Parenthetically, when I last wrote about fascist tendencies in the EFF, I received death threats and some very nasty responses. For a political movement that has “freedom” in their name, the EFF certainly have a restricted understanding of the term.

And so, when I saw the video clip of Shivambu’s aggression towards the journalist, and reflected on the many times we have seen the EFF disrupt or hijack meetings, I remembered another time when journalists were intimidated by political party members who thrived in their self-given status as “commanders” and “fighters” – and displayed great pride in their fascist tendencies. They were the Afrikaner Weerstandsbeweeging (AWB).

I recalled the day, on 22 May 1986, when the AWB violently disrupted and simply took over a National Party meeting in what was Pietersburg. The AWB made two main demands – besides the fact that they wanted to beat up on the NP and anyone who stood in their way – that the apartheid state return the land of the Boers (Boerestaat), and that the foreign minister at the time, Pik Botha, stopped selling the country to the West. It all sounds so terribly familiar.

Photo: Members of the Afrikaner Weerstandsbeweeging Wave the Neo-Nazi and old Boerestaat Flags, 22 May 1986 in Pietersburg. (Photo by Ismail Lagardien)

The May 1986 meeting was meant to be an NP affair. The Old Crocodile, PW Botha, was going to explain the NP’s plans for the future of the country. The AWB had different ideas. They wanted more than a Beer Hall Putsch. They wanted “their land” and did not want to be “bastardised” and sought to preserve the purity of the “volk”. (That is what was written on the banner captured in the picture, above)

On that occasion, in May, 1986, I was reminded of the failed Beer Hall Putsch of November 1932, when Adolf Hitler and his goons broke up a meeting of the Bavarian government, and declared:

“The national revolution has broken out!”

One of the photographs (below) I took showed anger in the face of the aggressors.

There were chaotic scenes everywhere in the Pietersburg hall. The AWB had hijacked the NP’s meeting, and the two groups traded insults and blows. What followed was violence, intimidation, name-calling and proud displays of neo-Nazi insignia.

We had white (AWB) fighting white (NP) members and supporters for a land that they had occupied since the first arrival of European colonialists four centuries earlier. A few years later, after former president FW de Klerk returned from Europe, where he had spoken about “black on black violence”, I asked him whether he would describe The Troubles in Ireland or the conflict in Yugoslavia, at the time, as “white on white violence”. I sought to demonstrate the double standards that were at play at the time. De Klerk dodged the question, with the reply: “Evidence shows that [in South Africa] there is black on black violence”.

Photo: A National Party loyalist, fresh from a bloody beating by AWB thugs, continues to protest. In the background, the photo-journalist, Gideon Mendel, contemplates his next shot. (Photo by Ismail Lagardien)

Back in May 1986, AWB name-calling included slogans about the NP having sold the country to the West, much like the EFF would, today, condemn the African National Congress for selling the country to foreign interests and/or white monopoly capitalists. In the melee, the AWB turned on the media.

Soon after the AWB thugs stormed the stage, I took several pictures, until I was pushed to the ground by a man in khaki, lifted off the ground and physically flung into a crowd of NP supporters. The AWB would would, later, deny everything.

At some point in the chaos a group of AWB members formed a circle around two or three of us journalists, started tightening the circle and tried to crush us. On another occasion, a few burley fellows, dressed in khaki shirts with red, black and white insignia, “accidentally walked” into me. The journalists were gob-smacked by the way in which the AWB simply took over the meeting, and the violence that ensued.

Photo: Wendy Schwegmann, who worked for Reuters at the time, was stunned. She is flanked on the left by Kevin Carter and Ken Oosterbroek on the right. (Photo by Ismail Lagardien)

I ended up in a bundle on the ground. I was kicked in the gut, but that, I was told, was all in my imagination. I got up, and had to run away, to the safety of a group of journalists and the police – who had their hands full with the AWB. At no point during the initial altercation or “scuffle” did the AWB members “touch me” – they claimed afterwards. Although I had bruised ribs to show for my efforts.

The AWB hated the press. They called me a “liberal communist journalist”, and claimed that I promoted a “Coca-Cola Kultuur” through the media. Journalism, you see, was a Western invention….

Thinking about these things over the past several days I recalled Malema and Shivambu’s time in the ANC Youth League, when the journalist Carien du Plessis was called a “white bitch”, when a British journalist was ejected from a press conference – and just how many times the EFF, not unlike the AWB all those years ago, presented themselves as the saviours of their people, how they dressed in symbolic garb and how they violently disrupted public meetings.

Paramilitary nomenclature, insignia, uniforms, and symbols were the pride markers of the AWB. The EFF seem to be no different. Their nomenclature include terms like “commander-in-chief” (not unlike the AWB’s “Kommandos” and “Generals” or the white supremacist South African National Front’s “white commandos” of the 1970s). The AWB wore their uniforms with great pride, the way that the EFF love their red overalls. The AWB nourished a culture of victimisation which provided a fertile ground for mass disaffection and threatened a swing to fascism. This is apparent, also, in the AWB’s latter-day cousins, like PRAAG and AfriForum.

The EFF’s behaviour has come to resemble a public degrading ritual so reminiscent of fascist behaviour, followed by sanctimony, fake regret and drawing on senses of victimhood. I have little doubt that the EFF will tap into a deep wells of discontent and misery in the country to swell their ranks, and march onward towards next year’s election. This is not too difficult to imagine. The Nazis came to power on 30 January 1933, after four years of public agitation, street fights, disruption and selective violence.

No amount of apologetic dismissal of the EFF as an accidental aberration, nor romantic articles about Malema as a humble fellow who once grew handsome cabbages and beautiful tomatoes, can detract from the fact that he heads a political movement that is dangerous, violent, intimidating and intolerant.

To conclude, then, the point that I wish to make is that some of us have seen this behaviour towards journalists before. We have seen the ways in which the AWB used pithy sentiments, manipulated the emotions of disaffected people, how they aspired to purity and pride, and how they would deny that they were a threat to society.

Remembering and forgetting are divided by a very thin line of self-righteousness. Some of us who worked in the media during the 1980s remember the dark and deceitful times.

The EFF look like they will be taking us back even further, to the rise of the thuggery, violence and intimidation of Nazi Germany.

Those of us who made it through the 1980s, and who learn from history, cannot forget easily. The difference between asking for permission and forgiveness sometimes lies in wilful exploitation of pride and privilege – and in the manipulation of truth, accountability and ethical public conduct.

Shivambu’s apology was too late. DM