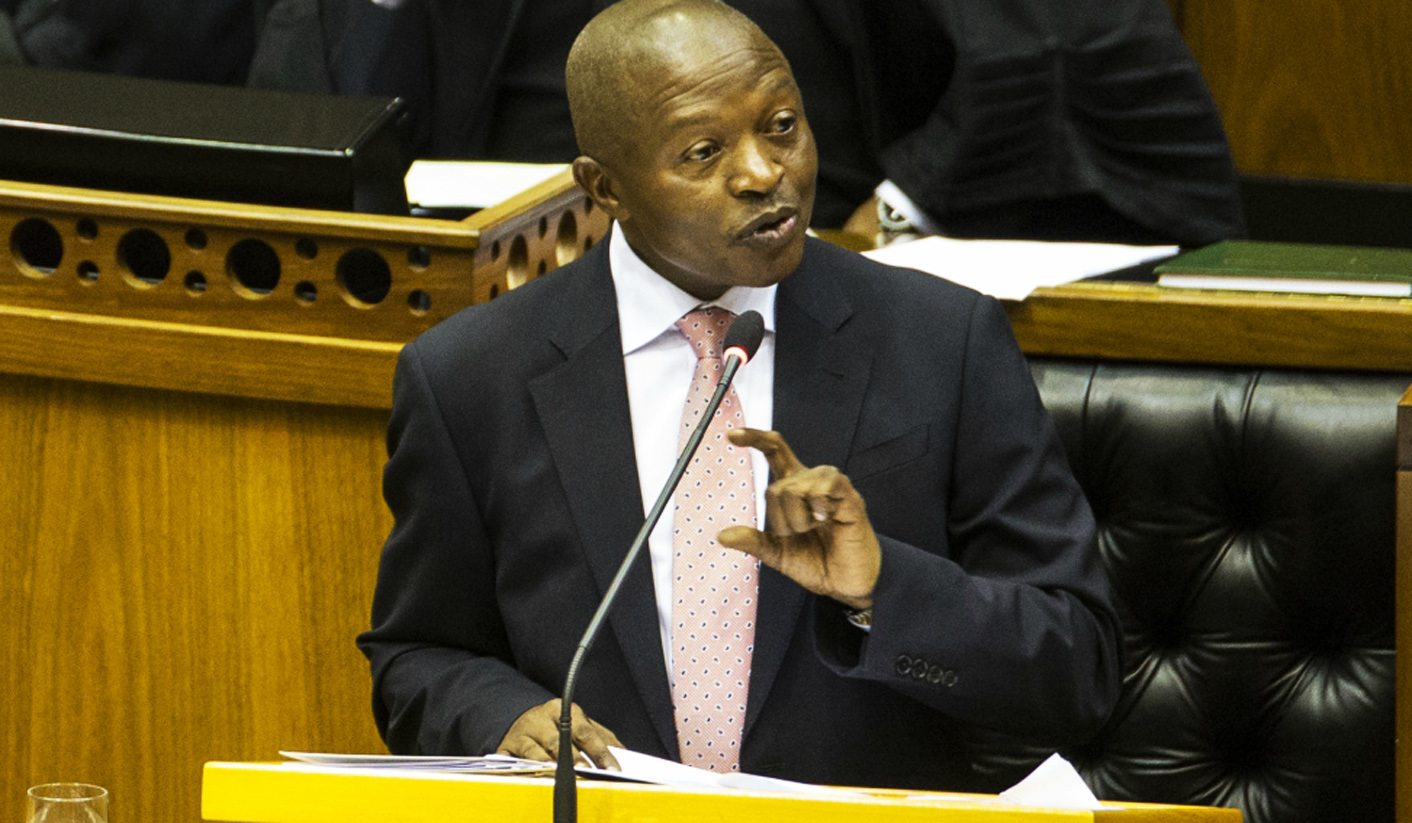 Deputy President David “DD” Mabuza’s past came back to haunt him on Tuesday during his maiden question session in the House. But ANC MPs and Deputy Speaker Lechesa Tsenoli moved to protect him from the uncomfortable questions on political killings in Mpumalanga, the province Mabuza presided over until recently, or his role in the so-called Premier League ANC lobby group for former president Jacob Zuma. Mabuza’s strategy? Pick and chose, leaving opposition parties with more waffle than ice cream. By MARIANNE MERTEN.

Tuesday’s question slot in the National Assembly publicly cemented Deputy President David “DD” Mabuza’s transition from the provincial to national political stage. He moved through his pre-scripted, flowery replies touting “collective action” in this the new dawn, but the responses to the unprepared follow-up questions were a little less polished.

The former Mpumalanga premier could not quite shake his past, particularly around a series of political killings of mostly whistleblowers, dubbed the January killings, that unfolded over a series of years after Mabuza became premier there following the 2009 elections.

That question was asked by DA Chief Whip John Steenhuisen as a follow-up – the unscripted part of the question slot where the main questions are sent through to the presidency two weeks ahead of time. The ANC moved to protect Mabuza, saying the question was unrelated and if the DA wanted to cast aspersions it must bring a substantive motion in line with parliamentary rules. Presiding officer, Deputy Speaker Lechesa Tsenoli, ruled that part of Steenhuisen’s question was speculation and the deputy president had the choice whether or not to respond.

“I will answer both parts,” said Mabuza turning to stare at Steenhuisen, and land his verbal jab:

“This is just a process to harm their names and their character… Go the nearest police station and lay a charge. You’ve laid so many charges!”

Another ANC move of protection by point of order unfolded when AgangSA MP Andries Tlouamma asked Mabuza whether he was now rehabilitated after his stint in the pro-Jacob Zuma premier league lobby. Tsenoli ordered him to withdraw the comment, or himself from the House. It was Tlouamma who left, saying:

“I can’t withdraw the truth”.?

The rehabilitation comment drew on Mabuza’s earlier defence of ANC MP Mduduzi Manana, who returned to the parliamentary benches after his sentencing of one year’s jail, or a R100,000 fine, after being convicted for beating up two women during Women’s Month 2017.

“We believe that people can be corrected. We don’t have a dustbin where we throw people. We correct them. We move with them,” the deputy president said in response to DA MP Terry Stander, who had asked for a straight-forward response:

Stander didn’t quite get her wish, nor did IFP MP Liezl van der Merwe, who asked why the council for gender violence announced in 2012 was still not established – and why Minister in the Presidency for Women Bathabile Dlamini was still a Cabinet minister.

“I will try to answer the question as best I can, but not dictated to,” was Mabuza’s response. “I’m sure you will allow me not to answer that question because the appointment of ministers and my appointment is the prerogative of the president.”

And then there was a blunt refusal to answer a follow up from DA MP Dean McPherson on how the nationalisation of the South African Reserve Bank (SARB) would stop illicit financial outflows:

“I think this is a new question,” was his line in the sand on this point which arose out of the ANC December national conference. New questions, according to parliamentary rules, are not allowed in the Q&A slot. And Tsenoli supported the deputy president’s stance.

The DA was not satisfied with this, or Mabuza’s offer to answer the question on another platform, and pressed for Tsenoli to make a ruling rather than expressing, what he said was, “his view” that the deputy president did not have to answer. That all got the ANC Deputy Chief Whip Doris Dlakude hot under the collar:

“We are tired of the DA…. The deputy president has responded. Why can’t you take it?”

It was the refrain frequently offered from the ANC benches when Zuma was at the podium during his presidential Q&A sessions. But it came in handy on Tuesday during a ducking and diving first question session by Mabuza in the House.

Some of his unscripted answers were disjuncted from the follow-up question on the original one. And so when EFF MP Marshall Dlamini probed what is being done about the half a million children dropping out of the school system between Grade R and matric, he received a winding response on the importance of government’s school nutrition programme:

“Some children are coming from poverty stricken households the only meal they are getting is at school…. So there are many factors for children to drop out… Government is spending a lot of money on making sure children get food at school. That is the main reason that keeps child at school.”

Opposition parties were not impressed. The deputy president in his capacity as leader of government business, or the liaison between the executive and Parliament, is already facing a complaint on his performance in that post. The DA laid a formal complaint after several ministers earlier this month failed to honour their date for questions from MPs despite assurances of their presence.

But the past loomed large elsewhere in Parliament too. Tom Moyane’s track-record at the helm of the South African Revenue Service (SARS) after several consecutive years of failing to hit tax collection rates caught up with him. The finance committee welcomed his suspension “in the public interest” by President Cyril Ramaphosa late on Monday evening. “… (I)n view of the role SARS plays, it is very important that senior officials are not just beyond reproach, but are seen to be beyond reproach. This is especially important in view of the need to achieve revenue targets, and tackle declining compliance and tax morality,” said committee chairperson Yunus Carrim.

The public hearings on the Traditional Courts Bill that seeks to regulate, regularise and bring in line with the Constitution all customary law courts continued from where they left off last week. It was the turn of traditional leaders’ organisations to give their views – largely centred on calls to ban the opt out clause which would give rural residents in traditional communities a choice whether to approach traditional or magistrates courts – alongside justice committee chairperson Mathole Motshekga’s musings on lingering colonial influences.

And addressing past land injustices moved a step closer. Parliament’s constitutional review committee decided on its programme of provincial hearings to get input on the last month’s resolution on changing Section 25 of the Constitution, dubbed the property clause, to make possible land expropriation without compensation.

It set off a wide-ranging public debate peppered with a dose of fear mongering even as government moved to underscore various caveats, like ensuring agricultural production and food security, alongside the emphasis of wide-ranging consultations.

On Tuesday, the expropriation matter also came up for Mabuza, who described the land question as “a constitutional process” part of radical economic transformation. “It is not lost on us that we must implement this radical socio-economic transformation agenda within a constrained environment, which sometimes takes an antagonistic posture by financial market forces. We are mindful that these market forces may invariably seek to limit political and policy decisions by government,” was his official scripted reply.

The answer to one of the unscripted follow-up questions appeared to wander off script somewhat. “I’m happy what the House has done. That gives us an extra lever so we don’t complain we are constrained by the Constitution,” said Mabuza. DM