Stephen Hawking: A brief history of his time 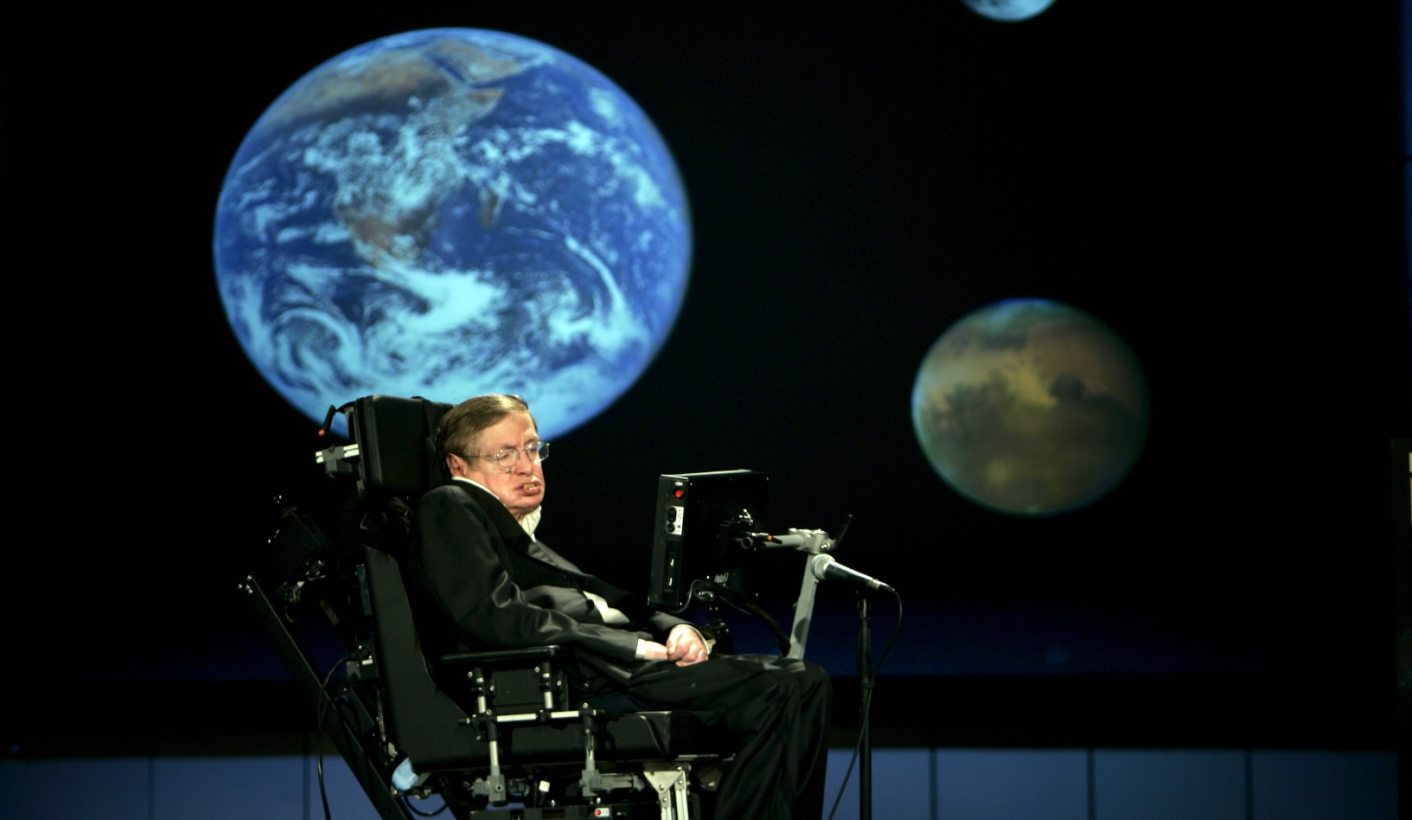 Stephen Hawking, visionary scientist, died at his home on 14 March, aged 76. Here’s why we will remember him. By MARELISE VAN DER MERWE.

I regard the brain as a computer which will stop working when its components fail. There is no heaven or afterlife for broken down computers; that is a fairy story for people afraid of the dark. – Stephen Hawking

Stephen William Hawking, theoretical physicist, cosmologist, astronomer, mathematician and best-selling author, died peacefully at home on 14 March 2018, his family said. They did not give details of his death, simply saying they would “miss him forever”.

He had battled motor neurone disease since the age of 21.

Hawking was born on 8 January 1942, precisely 300 years after Galileo, in Oxford, England. His parents, though not wealthy, both attended Oxford University, having met in London shortly after the start of World War II. Due to the danger of bombings, the family relocated to Oxford so that Hawking’s mother, Isobel, could give birth in greater safety. She had three other children: two younger girls, Philippa and Mary, and an adopted son, Edward.

When Hawking was eight, his father became head of the parasitology division at the National Institute for Medical Research, and the family moved to St Albans, north of London. The family was known locally for their eccentricity, their habit of travelling in a converted taxicab, and usually being seen buried in various books. They lived in a dilapidated, cluttered “three-storey fixer-upper that never quite got fixed”.

Hawking wanted to study mathematics at Oxford, despite his father’s wish that he study medicine. Mathematics was not available, however. According to Hawking’s website: “After three years and not very much work, he was awarded a first-class honours degree in natural science.” In October 1962, he arrived at the Department of Applied Mathematics and Theoretical Physics (DAMPT) at the University of Cambridge, wanting to begin research in cosmology, since there was nobody working in that field in Oxford at the time. Within three years, he had gained a PhD with his thesis titled Properties of Expanding Universes, become a research fellow, and by 1969, become Fellow for Distinction in Science at Gonville & Caius college.

But in 1963, life threw him a curve ball. At just 21, he was diagnosed with a rare early-onset slow-progressing form of amyotrophic lateral sclerosis (ALS),and given two years to live.

“My expectations were reduced to zero when I was 21,” he said in a later interview. “Everything since then has been a bonus.” Hawking defied the odds and lived to 76, receiving the occasional critique for not being more vocal as a disability-rights activist (though he did consent to his children taking part in the ice-bucket challenge for ALS on his behalf). He argued instead that he wished to be regarded as “a scientist first, popular science writer second, and, in all the ways that matter, a normal human being with the same desires, drives, dreams, and ambitions as the next person”.

Nor did he wish to be typecast; instead offering a scathing take-down of public expectations. “I fit the part of a disabled genius,” he said. “At least, I’m disabled – even though I’m not a genius like Einstein ….The public wants heroes. They made Einstein a hero, and now they’re making me a hero, though with much less justification.”

After his diagnosis, Hawking’s career streaked ahead. In 1966, his essay Singularities and the Geometry of Space-time won the Adams Prize; two years later, he moved to the Institute of Astronomy. By 1973, he returned to the DAMTP, and published his first academic book, The Large-Scale Structure of Space-Time, with George Ellis. In the 1970s, he was elected a Fellow of the Royal Society and Sherman Fairchild Distinguished Scholar at the California Institute of Technology, became a Reader in Gravitational Physics at DAMTP and progressed to Professor of Gravitational Physics and later, Lucasian Professor of Mathematics (1979). By 1988, he had published A Brief History of Time, which would sell over 10-million copies.

It was also following his diagnosis that his relationship with first wife Jane Wilde blossomed. Wilde, who wrote two books about her relationship with Hawking – Music to Move the Stars and Travelling to Infinity: My Life with Stephen – had three children with Hawking: Robert, Lucy, and Timothy. The couple were married until 1990. Although Wilde had herself had a romance of sorts with organist Jonathan Hellyer Jones – which Hawking said he did not object to, as long as she continued to love him – it was Hawking’s decision to leave the marriage to pursue a relationship with one of his nurses, Elaine Mason, to whom he was married for 11 years.

There were concerns that Mason was abusing Hawking physically and emotionally; she was described as “controlling and manipulative”, with daughter Lucy calling the police after Hawking developed cuts and bruises that could not be explained, as well as a fractured wrist. Hawking publicly denied any abuse and Mason was not charged, though the couple later divorced, and he resumed a closer relationship with Jane and his children.

In 2014, Wilde’s second book was made into the award-winning film The Theory of Everything which – despite Hawking’s assertion that he “did not read biographies about himself” – he did drily review. His first verdict: it needed more science. His second verdict: “Unfortunately,” he said, “Eddie (Redmayne, who portrayed him in the film) did not inherit my good looks”.

“My physician assistant,” he wrote of his personal life on Reddit, “reminds me that although I have a PhD in physics, women should remain a mystery.”

Hawking’s sense of adventure was well known. He celebrated his 60th birthday in a hot air balloon, appeared in a number of popular TV shows including Futurama, The Simpsons and Big Bang Theory; and had his voice recorded for a Pink Floyd song. He travelled extensively, addressing audiences all over the world. As his illness progressed, he and his team remained at the forefront of research into more effective communication methods, so that he could remain as active as possible.

Though Hawking’s influence on humankind’s understanding of the workings of the universe was undeniable, his acerbic wit also played a role. Asked in 2017 whether he believed he was the most intelligent person in the world, he described people who cared about such things as “losers”. “I have no idea. I would never claim this,” he said. “People who boast about their IQ are losers.”

Reading it another way, he earlier argued: “Intelligence is the ability to adapt to change.”

Hawking will be remembered for the extraordinary contribution that he made to cosmology and theoretical physics, but also for the way in which his work captured popular imagination. Hawking, who had been interested in the concept of gravitational singularities, thought of the Big Bang as a process similar to the collapse of a black hole in reverse – a continual expansion, which was not widely accepted at the time. Or, to put it another way, that the universe began as a singularity.

“Physics was always the most boring subject at school because it was so easy and obvious. Chemistry was much more fun because unexpected things, such as explosions, kept happening,” Hawking said. “But physics and astronomy offered the hope of understanding where we came from and why we are here. I wanted to fathom the depths of the universe.”

His reversal of how humankind understands black holes contributed to his interpretation of his own life and challenges. “Black holes aren’t as black as they are painted,” he explained of his later work. “They are not the eternal prisons they were once thought. Things can get out of a black hole, both to the outside, and possibly, to another universe. So, if you feel you are in a black hole, don’t give up. There’s a way out.”

“The discovery of Hawking radiation, as it is known, turned black holes upside down. It transformed them from destroyers to creators — or at least to recyclers — and wrenched the dream of a final theory in a strange, new direction,” wrote Dennis Overbye in his Hawking’s obituary in The New York Times.

“His book A Brief History of Time became an unlikely best-seller,” wrote the BBC of Hawking, “although it is unclear how many people actually managed to get to the end of it.”

“Not since Albert Einstein has a scientist so captured the public imagination and endeared himself to tens of millions of people around the world,” said New York professor of theoretical physics Michio Kaku.

Astronomer Royal Lord Rees, one of the world’s most eminent scientists, called his life a “triumph” and “a manifestation of amazing will-power and determination”.

Cambridge University called him “an inspiration to millions”.

Hawking’s research forever changed humankind’s understanding of the workings of the universe. “If we find the answer to that, it would be the ultimate triumph of human reason – for then we would know the mind of God,” he wrote in A Brief History of Time.

His work is done, but he has laid foundations for others. And though he earlier said he wanted the formula for Hawking radiation engraved on his tombstone, for now, a fitting epitaph is his reminder always to remain curious: “Remember, look at the stars and not at your feet.” DM

Photo: Professor Stephen Hawking delivers a speech entitled ‘Why We Should Go Into Space’ at The George Washington University in Washington, DC, USA, 21 April 2008. EPA-EFE/STEFAN ZAKLIN