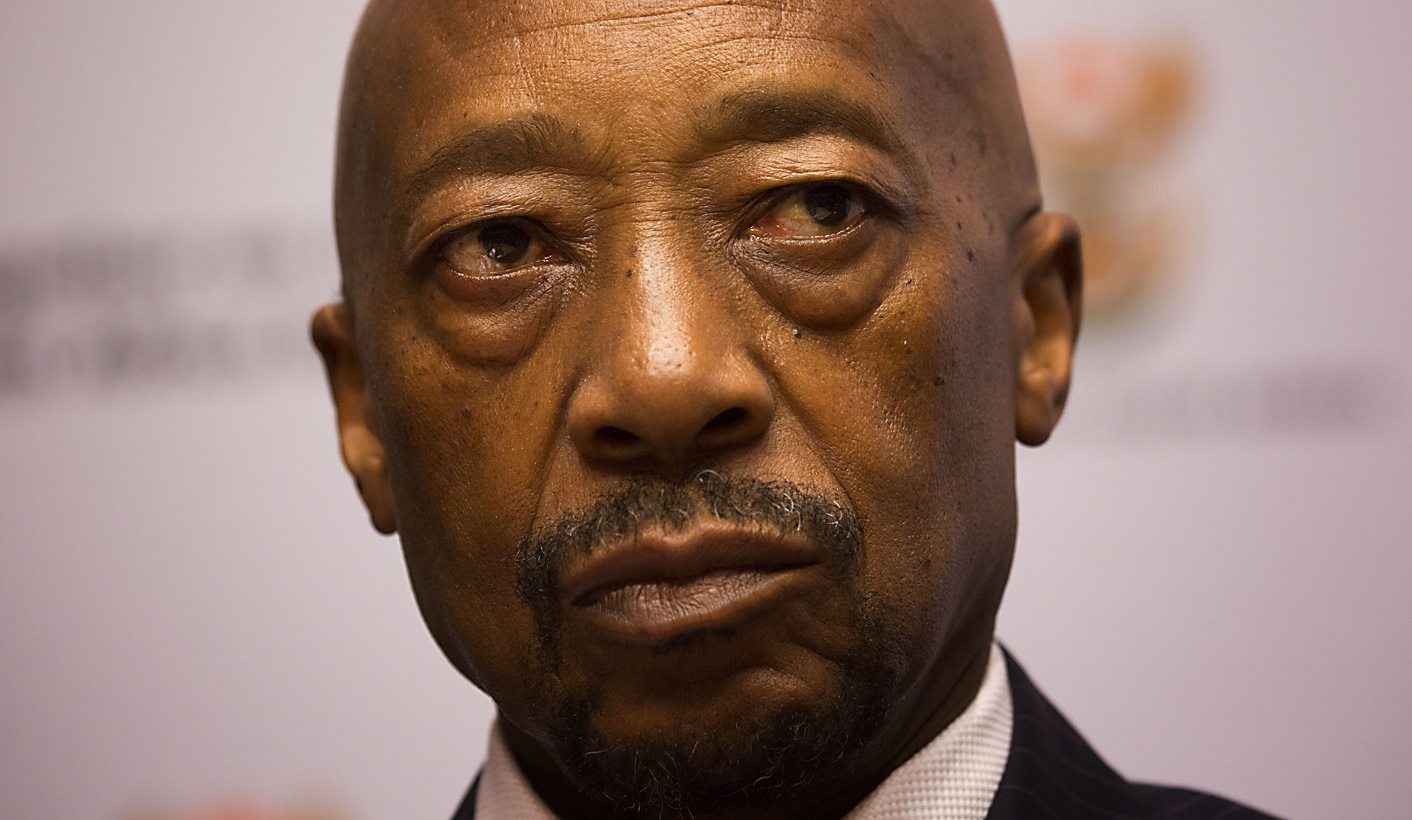 On Friday, SARS appointed a debt collector fingered in an alleged money laundering ring linked to Chief Officer Jonas Makwakwa. New Integrated Credit Solutions is now contracted to help the struggling revenue service to collect R16.6-billion. But the Pretoria-based company was mentioned in the damning investigative report that accused Makwakwa of stuffing hundreds of thousands of rand into ATMs and living far beyond his means, compiled by the Financial Intelligence Centre. By PAULI VAN WYK for SCORPIO.

A struggling SARS last week announced the appointment of New Integrated Credit Solutions and seven other agencies to recover R16.6-billion in order to boost revenue collection. In May 2016 Financial Intelligence Centre (FIC) investigators in a damning report said that more than R17-million of taxpayers’ rands flowed through New Integrated Credit Solutions (NICS) and 12 other entities in order to finally dump R600,000 of it into the personal bank account of SARS’ Chief Officer for Business and Individual Tax, Jonas Makwakwa.

The FIC report stated that New Integrated Credit Solutions paid Mahube Payment Solutions, a company linked to Patrick Monyeki, a reported friend and business associate of SARS Commissioner Tom Moyane. Monyeki’s company is part of the same alleged money laundering ring, according to FIC, which labelled this entire financial flow as “suspicious and unusual payments”, and said it must be investigated to determine:

Chairman and director of New Integrated Credit Solutions Baker Maseko on Monday lamented being questioned, asking if journalists are targeting him because he has a “uniquely black debt collecting firm”. He agreed to answer written questions from but ultimately failed to do so. It is unsure how big a portion of the R16.6-billion debt Maseko’s firm needs to collect, and what their cut would be.

One Mpho Makwakwa is listed as Maseko’s co-director in New Integrated Credit Solutions. Scorpio cannot yet confirm whether there is a link between Mpho Makwakwa and Jonas Makwakwa. Maseko declined to verbally answer Scorpio’s questions about Mpho.

SARS stressed that Moyane had no access or influence over the committees deciding over the debt collecting tenders.

“Commissioner Moyane does not [sit] either in the Bid Evaluation Committee or the National Adjudication Committee (where Chief Officers/exco members sit) or any other procurement committee” deciding over tenders, SARS spokesperson Sicelo Mkosi said.

However, Makwakwa seems to have had some say in the matter. Said Mkosi:

“Makwakwa saw or is expected to have seen the names of the recommended companies for the first time in the [National Adjudication Committee] meeting wherein he declared that he does not know ms Mpho Makwakwa. On the basis of the declaration, [the committee] unanimously approved the suggested names without any dissenting or different views.”

If Jonas Makwakwa recognised New Integrated Credit Solutions’ name from the FIC report that got him suspended for more than a year and labelled him a possible fraud, he seems not to have sounded the alarm.

Makwakwa also did not recuse himself from the process based on a shared surname with a director of the company or based on the allegations made by the FIC report.

SARS stressed that New Integrated Credit Solutions is “not new to SARS”, something Maseko repeated.

“New Integrated Credit Solutions has been contracted to SARS to provide similar services for the past 10 years, long before the arrival of Mr Moyane or before the seniority of Mr Makwakwa. So linking its current presence to Mr Moyane is rather unfair.”

Mkosi continued, saying it is “unfair to suggest that Commissioner Moyane should have known that one of the companies has a possible link with one of his ‘friends’ (Patrick Monyeki), which link is not documented into any of the company’s books”.

When history repeats itself

It is however not the first time that Moyane is in a questionable position thanks to a dodgy debt collector.

Previously, nephew bagged a possibly lucrative debt collecting contract from SARS. Nhlamulo Ndhlela’s company, Lekgotla Outsourcing, was part of Lekgotla Trifecta Collections – a consortium that was at the time awarded a contract to collect over R2-billion of debt. The family relation between Moyane and Ndhlela was allegedly not disclosed to SARS’ bid adjudication committee. The matter caused a public furore and SARS jumped to get the contract dissolved.

Where it all began

SARS’ latest debt collecting headache gained notoriety in May 2016 when the FIC compiled a damning preliminary report showing Makwakwa developed a “dependency” on mysterious payments to maintain his lifestyle. In 75 transactions between March 2010 and January 2016, the FIC said, Makwakwa received amounts of unknown origin totalling over R785,000. He also stuffed ATMs with hundreds of thousands of rand in mysterious cash. A subsequent Scorpio investigation focusing on 2014 to 2016 showed Makwakwa often spent two to three times more per month than he legitimately earned per month.

Another of the strange events highlighted by FIC investigators in their report is a suspected money laundering ring with government’s Department of Water Affairs and Forestry as its starting point and Makwakwa as the ultimate end.

According to the FIC report, the Department of Water Affairs and Forestry paid R17.87-million to New Integrated Credit Solutions on 11 February 2015. In less than a month the money moved through 12 entities, making a circular movement that the FIC described as possible money before R600,000 landed in the account of company Biz Fire Worx. Makwakwa was once a director of Biz Fire Worx for three months before resigning from his position. Several months after resigning, Biz Fire Worx made three payments totalling R600,000 emanating from the Department of Water Affairs and Forestry into Makwakwa’s account. The FIC investigators found he made an EFT payment of R200,000 from his personal bank account to Mercedes Benz Financial Services for a Mercedes Benz C220 Bluetec, and gifted the luxury car to his girlfriend Kelly-Ann Elskie. A Scorpio investigation confirmed this finding, based on Makwakwa’s bank accounts.

The broad investigation into Makwakwa and his girlfriend Kelly-Ann Elskie has however been tailored with the help of international law firm Hogan Lovells, a Scorpio investigation has found. SARS Commissioner Tom Moyane has further deceived Parliament into believing that Makwakwa was found not guilty on all charges relating to the FIC report. Reacting to Scorpio’s broad investigation, Moyane and Hogan chairman Lavery Modise strenuously denied any improper conduct.

In October 2017 the Hawks confided in NGO Corruption Watch, saying the arrest of Makwakwa, Moyane and Elskie was “imminent”. The letter was written to Corruption Watch days before Moyane announced that Makwakwa would return to his top job after being “cleared” of all charges. The docket has since been moved to a second Hawks investigator where it seems to have come to a grinding halt.

Former minister of finance Malusi Gigaba announced revenue deficit for the past financial year. Reporting to Parliament earlier in March, Treasury deputy director-general Ismail Momoniat confirmed that all is not well in SARS, referring to failures in revenue administration and accountability.

“That is why a commission of inquiry has been appointed,” Momoniat revealed.

Moyane was livid with Momoniat, labelling his reportage to Parliament as “irresponsible” and “untrue”, three independent sources confirmed. DM

Kimberly Mutandiro for GroundUp
Save 3 mins