Anti-Racism Week: Campaign aims to teach your children well about scourge of racism 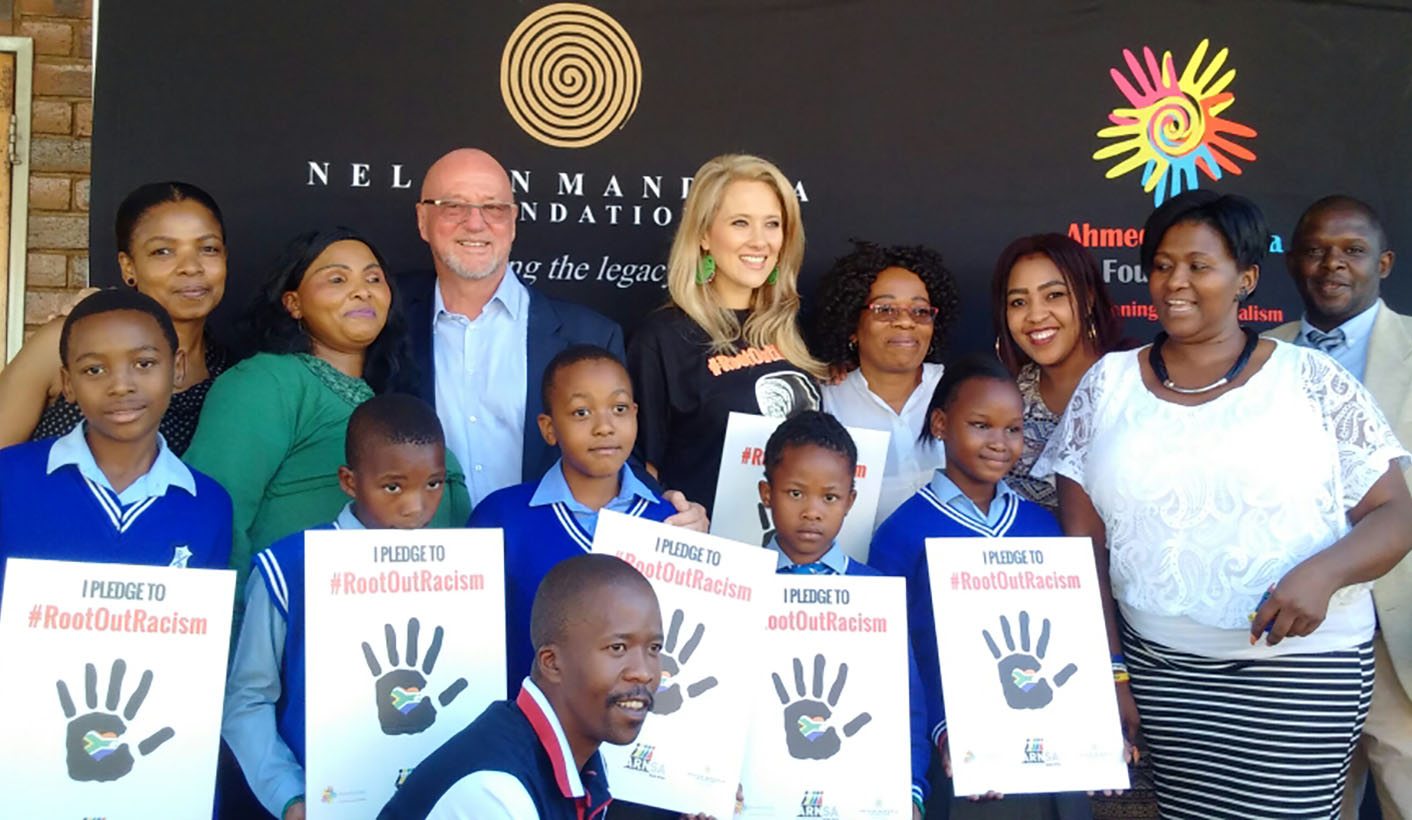 Paul Mosaka Primary School pupils displayed a good understanding of racism and what it entails at Monday’s launch of the #RootOutRacism Week Schools’ Programme ahead of Anti-Racism Week which kicks off on 14 March. Their labelling of Tourism Minister Derek Hanekom as “pink” underscored the main theme (racism), revealed their honesty, exposed their understanding of the issue, and set the tone for the week ahead. By BHEKI SIMELANE.

Racism is one of democratic South Africa’s main challenges, but it would seem that South Africa’s children have a better understanding of what it is all about. This was evident during the launch of the Anti-Racism Week Schools’ Programme at the Paul Mosaka Primary School in Pimville, Soweto.

A number of children participating in the event said they had experienced some form of racism.

Grade 5 pupil Noluthando Rantho said she often observed acts of racism on the school playground. She described how coloured and black pupils were sometimes reluctant to play with each other because they looked different from each other.

“If we appreciate one another we will end racism. If we love one another there will be no racism, because racism is driven by how we look at one another,” Noluthando said.

She suggested that in order to end the scourge of racism, racism should be taught in schools as one of the subjects.

“Racism is bad. Doing away with racism is choosing good over bad,” Grade 7 pupil Kamogelo Ranchebe said, adding that racism occurs when one discriminates against another because they believe they are better than the other.

“Those who practise racism should be treated the same way as criminals and penalised because racism is bad for the people of this country,” said Ranchebe.

Asked what the purpose of the campaign was, Tourism Minister Hanekom said it was to focus our minds on how we can build an equal society.

“We have to stand up together as South Africans and say we will beat racism,” he said, adding that the campaign kicked off at schools because it was believed consciousness about racism should be instilled early.

“We believe awareness should begin at an early age,” Hanekom said.

He said people must be assisted to speak out when they encounter incidents of racism, and that educating people about racism was very useful.

Describing Hanekom as “pink” and possibly rich, pupils explained their understanding of racism as an act predominantly committed by white people who were privileged and had power over black people.

Beauty Pole, a teacher and School Governing Body member representing teachers, said racism was one of the burning issues that needed urgent attention in the country, especially in schools. She said education was the best tool to fight racism, adding that she was happy the campaign was launched at a Soweto school because of racially charged incidents in schools in the area in recent months.

In recent months learning was disrupted at several schools in the area following the appointment of black principals at predominantly coloured schools. Authorities have repeatedly denied that racism was the cause of the disruptions.

Motivating the children to see their worth, Hanekom said: “You are as good as anyone else. No one is better than you.”

He said Nelson Mandela, Albertina Sisulu, Walter Sisulu and Solomon Mahlangu all dreamed about a society free of racism.

The RootOutRacism Week Schools Programme is spearheaded by the Ahmed Kathrada Foundation for which Hanekom is deputy chair and precedes Anti-Racism Week which runs from 14 to 21 March.

Asked what the campaign means to the foundation, Busisiwe Nkosi of the Ahmed Kathrada Foundation said it was a motivation to teach people about the scourge of racism.

“The more people know about racism, the broader the discussion and engagement, and the better the means of tackling it,” she said.

The campaign opens a window for broad engagement and awareness, especially in a country like South Africa still haunted by the ghosts of its turbulent political past. The idea to focus the campaign in schools no doubt instills on the pupils the notion of the existence of racism at a young age, but will also ensure that awareness reaches a vast majority of the population of young children in schools.” DM

Photo: Tourism minister and deputy chairperson of the Kathrada Foundation attends the launch of the RootOutRacism Week Schools Programme at the Paul Mosaka Primary School in Soweto. With him are pupils, staff and members of the foundation. Photo: Bheki Simelane