Right of Reply: The refusal to listen to Lekota is not hypocritical 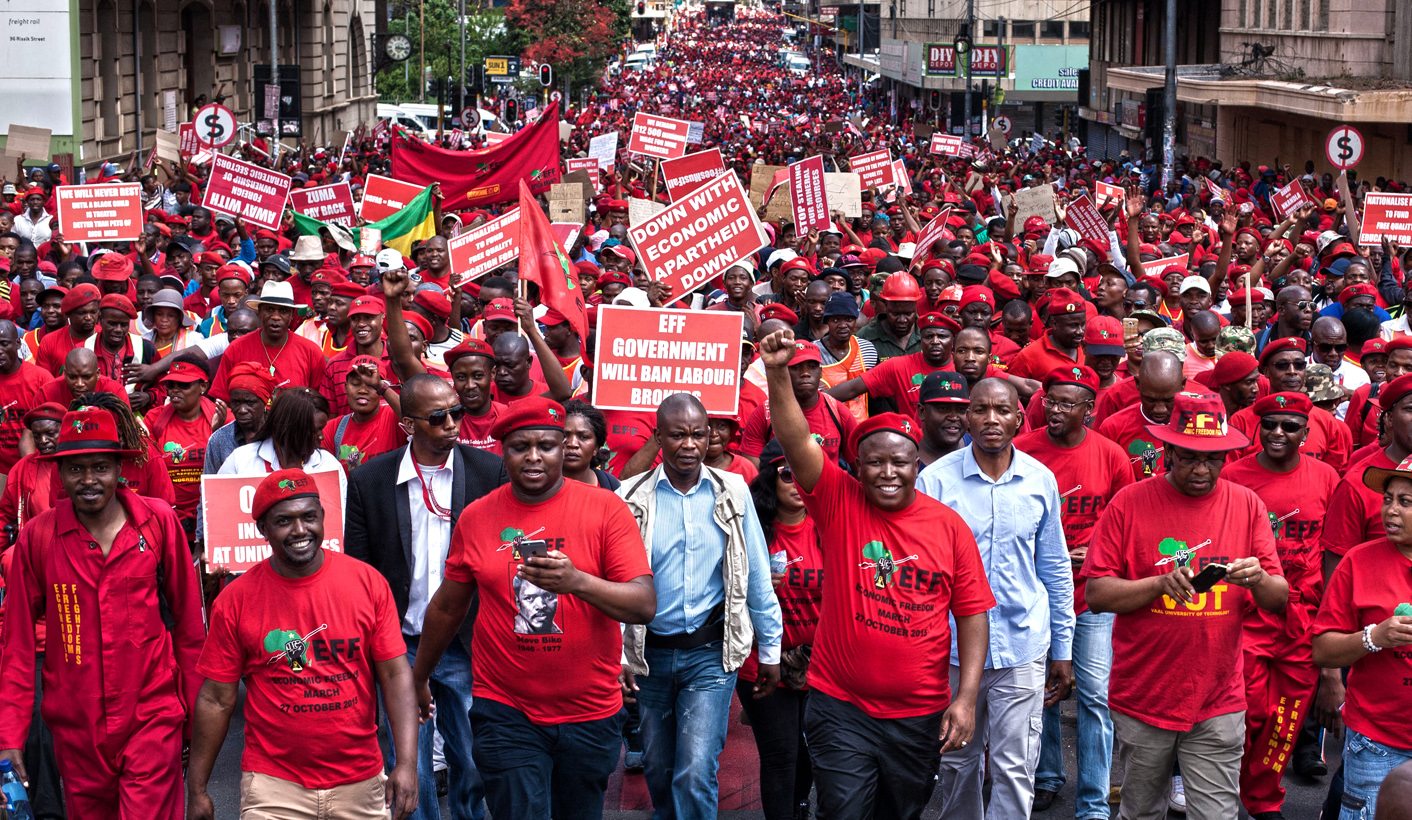 The ramblings of Leader of the Congress of the People, Mosiuoa Lekota, are a mere distraction from the important matter at hand, and that is the return of the land to its rightful owners. By GODRICH GARDEE.

Esteemed Professor Njabulo Ndebele, in his spirited defence of the Leader of the Congress of the People, Mr Mosiuoa Lekota, rubbishes the Economic Freedom Fighters as hypocritical. This is for what he labels uncalled-for interruptions by the EFF, when Lekota asked spectacularly outrageous questions in Parliament during the SONA debate.

Ndebele’s attack on the EFF is premised on two points. The first is that Mr Lekota raised legitimate questions, which required well-considered answers; and that by failing to deal with the questions Lekota raised, the EFF demonstrated lack of depth of understanding of the land question in South Africa. Secondly, he claims that by refusing to listen to Lekota, immediately after the President of the EFF asked President Ramaphosa to listen to people, (even those he disagrees with) the EFF is being extraordinarily hypocritical.

Responding to the ANC’s bluff on their commitment to land expropriation without compensation, and to EFF president Julius Malema’s warning to the DA that those who do not support the call for land expropriation without compensation will be regarded as enemies of our people, Mr Lekota enthusiastically asked: “You must tell us who are you going to take the land from. Are you going to take the properties of people who arrived here as slaves from the Malay peninsula? Whose properties are going to be taken?”

He added: “You say you’re going to give the land to ‘our people’. Who are ‘our people’ and who is not ‘our people?’ This constitution says all of us are South Africans and we all have the same rights.”

These questions must be understood within the context of Mr Lekota’s long-held views about the land question in this country, views based on grave historical revisionism and falsifications. Speaking at the celebrations of the 20th anniversary of the Constitution in the National Assembly in March 2017, Lekota asked: “So to whom did we sell out? Unless you don’t believe South Africa belongs to all.” Lekota argued: “This Constitution is a product of all of us. The land some people want to take from others, you’ll be taking from our grandparents and great-grandparents, and we’ve inherited all of that, the whole country. So please be careful. If you want to take our land from us, to whom are you going to give it?”

When the EFF tabled a motion in Parliament in 2017 for land expropriation without compensation, Lekota once more asked: “Who stole the land, and from whom?” Following that debate, he was interviewed by Sakina Kamwendo of SAFM on the AM Live radio show. During that debate, Mr Lekota made even more outrageous claims, amongst which were that in the Cape Colony, black people never had their land forcefully taken from them, and that black people were relatively free, and could vote and own properties. He argued that amongst many of those who own land are descendants of slaves who came to this country, and out of their ‘sheer hard work’, accumulated enough wealth to own properties.

Of Cecil John Rhodes, Lekota claimed that he came to this country because of ill-health, and not for any nefarious purposes, and that out of sheer brilliance, hard work and agency, Rhodes amassed as much wealth as possible, bought huge chunks of land, some of which he donated for good use, as is the case with the land on which the University of Cape Town is now located.

According to Mr Lekota’s argument, therefore, we do not have a problem of land inequality in this country because land belongs to all of us, and we never had a problem of massive land dispossession because the whites introduced the concept of ownership first. This is quickly rebutted by facts.

The recent land audit report, with all its shortcomings, highlights that black South Africans own just 1.2% of rural land, and about 7% of urban land. A fact sheet on land ownership done by the Institute for Poverty, Land and Agrarian Studies a few years ago highlighted that in actual fact, 67% of the country was owned by commercial agriculture, which consisted at the time about 40,000 farming units, 15% of the land was in communal areas, and 10% was State owned. If we were to listen to Lekota, we may be convinced that this gross inequality in land ownership is as a result of laziness amongst blacks, and not systematic dispossession.

He argued on that SAFM interview that land ownership was not even a concept until white colonists arrived and introduced the concept of title deeds. Land ownership started then, he argued, and it is that institution of the concept of title deeds that made it possible for anyone to acquire land today. Lekota claims that before whites came, land was simply occupied, not owned. Here, he misses another historical fact, that the concept of individual ownership of land was considered profane in African culture. As a result, people lived on and off the land with a deeply entrenched understanding that the land belonged to all, could be used by all, for the benefit of all.

This argument is also tragic in a sense that he delegitimises centuries of gallant struggles for freedom by our forebears. If, as he argues, black people in the Cape were relatively free, then we ought to ask: who almost exterminated the Khoi and the San and for what? Why were there nine frontier wars between the British and the Xhosa, for a period of 100 years, in what we now know as the Eastern Cape?

In his recent book, The Land is Ours Advocate Thembeka Ngcukaitobi highlights the deleterious effects of land dispossession and how that prepared the ground for present day social and economic infrastructure of this country. Ngcukaitobi observes, “By 1878, the Xhosa had lost their land. This was to be the blueprint for the country as a whole.”

The EFF is aware of all these arguments advanced by Mr Lekota, and on matters as important as the resolution of the land question, we ought not to entertain historical falsifications. Professor Ndebele and Mr Lekota both come from the black consciousness movement, which inspired revolt in the quest for freedom in this country, and for his troubles, Mr Lekota landed up in Robben Island for ten years. It was for this reason that Mbuyiseni Ndlozi asked him what he was in Robben Island for, if not for the complete freedom of African people, which would entail the return of their dispossessed land.

A key component of the black consciousness movement was a strong rejection of false nationalism, as espoused by NUSAS at that time; and keenly propagated by both Mr Lekota and Professor Ndebele today. Professor Ndebele’s tenure as Vice-Chancellor of the University of Cape Town was characterised by his assimilation of this false nationalism through his papering over cracks of racism at that University. During his tenure there, he did very little to advance authentic transformation, and perpetuated pseudo freedom and the belief that we are all equal, despite racially inspired inequalities at that university and elsewhere in the country.

The much celebrated 1976 generation did not speak nicely to their parents, who were busy drinking and engaged in nauseating litanies while the country burned. Why should this generation of revolutionaries, dedicated to economic freedom in this lifetime, waste time listening to historical falsifications by Lekota? The questions he asks have long been answered by history. Writing in the late 1950s, Pan Africanist theorist and one of the generation of the 1944 ANC Youth League , Peter Nkotseu Raboroko, once asked: “The crucial issue today is whether the interests of the five million Europeans throughout Africa must continue to dominate over those of the two hundred and eighty million Africans, or whether the reverse process should obtain. This is an issue that no social philosophy pretending to have a solution for Africa can afford to gloss over.” This should answer Lekota’s question regarding what people refer to when they say “our people”. They are not an undifferentiated lot, as Professor Ndebele rightfully claims, but they are a dispossessed lot.

The ramblings of Lekota are a mere distraction from the important matter at hand, and that is the return of the land to its rightful owners. Mr Lekota, and now sadly, Professor Ndebele’s protestations about the posture of the EFF were aptly defined by that iconic leader of the then Non-European Unity Movement, IB Tabata, who wrote of the likes of Mr Lekota thus:

“It eminently suits the master to foster these artificial differences and supposed superiorities. The curious thing is that he has always found no more willing assistants in the game of divide and rule than the slaves themselves, who guard the rigid barriers with an almost religious zeal. The master sets the fashion in ideas and attitudes. He is supercilious towards his ‘inferiors’ and the slave in turn looks down his nose at those whom he considers to be his inferiors. It is indeed strange that the slave is acutely aware of the minutest details in the preferential treatment meted out by the master to the various groups, but he is blind to the most obvious fact that determines his very existence. He is blind to the very thing which binds all the groups together – a common misery, humiliation, destitution. In a word, common slavery.”

The refusal to listen to Lekota, therefore, and those like him, is not hypocritical. It was, and is, necessary, if we are committed not to contaminate the struggle for real freedom of the African people, from whom land and human dignity were taken. DM

Godrich Gardee is Secretary General of the Economic Freedom Fighters.