Fugitive Ajay Gupta sought for other corruption, not Estina 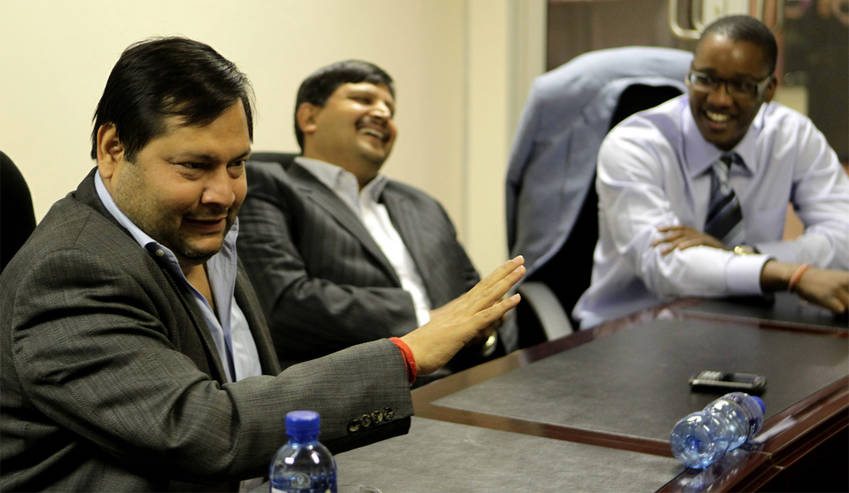 Acting Hawks head Yolisa Matakata announced on Friday that the warrant of arrest for Ajay Gupta is unrelated to the Estina Dairy case, which has already put eight Gupta associates in the dock. Given the litany of allegations against the suspect, the Hawks have no shortage of options, but Matakata offered more questions than answers. By GREG NICOLSON.

Speaking in Pretoria on Friday afternoon, Matakata contradicted Police Minister Fikile Mbalula who had said Ajay Gupta was being sought in relation to the Estina Dairy case in Vrede, Free State, where R220-million meant for emerging farmers into the coffers of Gupta-linked businesses.

The cases against the Guptas and their associates been defined by confusion since eight suspects were arrested on 14 February and appeared in the Bloemfontein Magistrate’s Court the next day The suspects were released on bail of between R10,000 and R200,000.

“The warrant of arrest against Mr Ajay Gupta is on an unrelated case of corruption and it is still active until it is executed,” said Matakata.

“He is sought for unrelated matters from , but it’s corruption,” she continued. “I’m not at liberty to state now on what corruption matter that is ” Matakata said Mbalula was misinformed.

There has been speculation that Ajay Gupta is wanted for allegedly offering to bribe former deputy finance minister Mcebisi Jonas with R600-million to take the job of finance minister, but the Hawks would not reveal any details of their case on Friday.

To add to the confusion, media reports detailed how Gupta, after being labelled a fugitive by the Hawks, avoided the clutches of justice by escaping from South Africa, but he is now suspected, along with his brothers, to be in either Dubai or India.

“At the time he was not in the country. He was out of the country,” said lead investigator Brigadier Zama Basi when the warrant of arrest was issued. The Hawks continue to speak to Gupta’s lawyers, calling for him to hand himself in.

Denying that the arrests were politically motivated, the acting Hawks head said her Serious Corruption Investigation team had done “remarkable work”. “Once you have a better sense of how much we have done, you will understand why I am so grateful and proud of their efforts.”

She indicated there was no warrant of arrest out on former president Jacob’s Zuma’s son Duduzane, one of the Gupta family’s closest allies. The Hawks earlier had announced they were seeking another five suspects.

“We’ve never made pronouncement around anyone else and specifically around what you’re asking about Duduzane Zuma,” she said. “We only referred to Ajay Gupta (who) is wanted as a fugitive.”

The suspects who appeared in the Bloemfontein Magistrate’s Court last week are from the Free State department of agriculture and Gupta businesses Kamal Vasram, Peter Thabethe, Sylvia Dlamini, Masiteng, Varun Gupta, Ronica , Nazeem Howa and Ashu Chawla. Two suspects are still being sought while three are believed to be foreign nationals and out of the country.

The National Prosecuting Authority’s Asset Forfeiture Unit (AFU) has seized R10-million from Atul Gupta’s personal bank account in relation to the Estina case, but the Hawks would not comment on whether he is also a suspect.

“On the issue of Atul Gupta and the AFU, I think we’re dealing with two different processes. We are dealing with a criminal matter and therefore the AFU matter is a separate process. It has nothing to do with the criminal case at the moment,” said Basi.

Atul Gupta has gone to court to set aside the freezing of his assets, while at the same time denying there was proof linking him to the Estina case. The AFU told the court there was evidence directly linking some of the R220-million stolen from government to his personal bank account.

The AFU has called the Estina case a “scheme designed to defraud and steal monies from the department”. The Free State department of agriculture programme was meant to assist black farmers, but they never saw the money. DM