SAPS Clean-Up: Scopa hears of ’millions’ mooted as IPID flushes out the mess of the Mangaung ’Shadow State’ 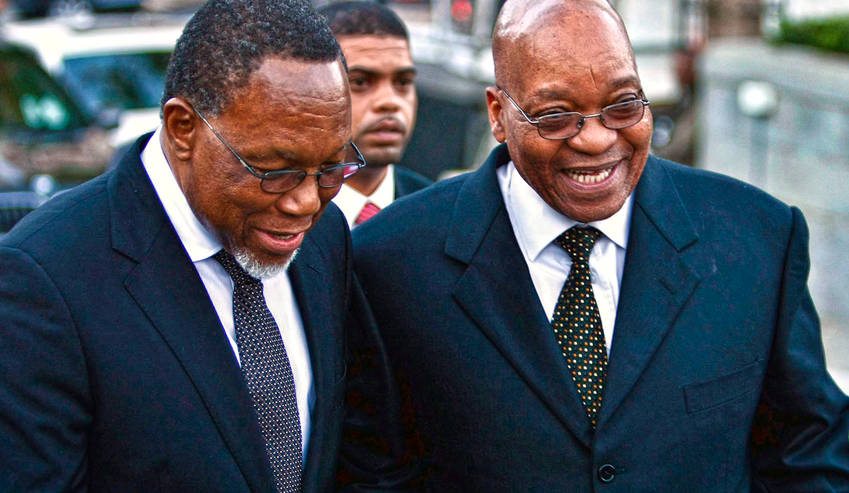 How did a convict sentenced in 1996 to 10 years for robbery with aggravated circumstances find himself floating around the ANC’s elective conference in Mangaung in 2012, flush with a cool R50-million aimed at stoking factional battles in the ANC? Continuing the tradition at Nasrec in December 2017, pressure was also allegedly placed on the SAPS to launder R45-million to buy votes. Details of this and other horrors of the Shadow State were revealed by the Independent Police Investigative Directorate at a Scopa report-back on Tuesday. The clean-up has begun. By MARIANNE THAMM.

It was the year the Constitutional Court declared the election of the Free State provincial executive invalid because of widespread fraud which had occurred on the watch of then ANC chairperson and Free State Premier Ace Magashule. It was also the year Kgalema Motlanthe launched his enigmatic, largely silent, “100 percent maybe” campaign in an attempt to thwart Zuma.

City Press, in 2012, wrote of how a team of some 40 hand-picked intelligence agents had been dispatched to the Free State “on a mystery mission”. The team had been assembled three weeks prior to the conference by acting crime intelligence head Major-General Chris Ngcobo, Zuma’s former bodyguard.

Police at the time refused to provide details of the mission, headed by Colonel Nkosana “Killer” Ximba, an ally of now suspended former head of Criminal Intelligence, Richard Mdluli, who had promoted Ximba from constable to colonel in one day.

“A crime intelligence insider told City Press that the team met behind closed doors and was tight-lipped about the mission, but that talk in the unit was that the team is going to Mangaung to ensure Zuma’s re-election.”

On Tuesday, IPID’s head of Investigations, Matthew Sesoko, shed more light on one of those CI agents who had flooded Mangaung back in 2012. What we now know is that the mission was titled “Operation Thibela” – and one of the men appointed to head what was known as the “Rapid Deployment Unit” was none other than Captain Morris “KGB” Tshabalala.

Captain Tshabalala arrived in town with a budget of R50-million to burn.

“The allegation is that some of the money was used to buy votes at the 53rd ANC conference,” said Sesoko, briefing Scopa on the high-profile cases being investigated by the directorate.

Sesoko added that the R50-million budget had “not been properly accounted for and as a result IPID and the office of the Inspector-General of Intelligence (OIGI) will be conducting an investigation in this regard”.

In the course of investigation, added Sesoko, IPID had discovered that Captain Tshabalala had not been doing any work related to fighting crime – “rather, he was doing work involving factional battles within the ANC”.

Tshabalala was finally arrested on 16 January 2018 and is currently awaiting trial. He was denied bail.

Tshabalala, convicted in 1996 on charges of robbery with aggravated circumstances and sentenced to 10 years in jail, had been recruited to SAPS in 2001 by then Gauteng deputy commissioner, Lieutenant-General Africa Khumalo, as part of a provincial task team called Thathazonke (Anyone is welcome). Khumalo, who died in 2010, was also implicated by convicted druglord, Glenn Agliotti, in former National Commissioner Jackie Selebi’s corruption trial.

Over 200 members of the ANC’s former self-defence units, set up to counter violence in the run-up to the 1994 national elections, were recruited to the Thathazonke task team. None was vetted.

Tshabalala’s superior at the time was Soweto crime intelligence head Colonel Smangaliso “Smanga” Simelane. Simelane’s name popped up in August 2017 in a “dossier” titled “Operation Wonder”, an apparent plot to assassinate Minister of Police Fikile Mbalula and leaked to Daily Maverick. We opted not to publish the report as we were suspicious of the motives of those who had made it public.

Of course, the question is, exactly how did Morris “KGB” Tshabalala survive in the SAPS for so long considering his record and continued criminal activity? This is a question someone in SAPS is going to have to answer as Scopa is determined to uncover who was responsible for vetting the corrupt cop and who it was that signed off on his recruitment to a key CI position.

Sesoko told committee members on Tuesday that Tshabalala, when he was recruited, had not disclosed his 1996 conviction. In 2005 he had been promoted to a Captain in CI. But in 2013 Tshabalala had been arrested for a robbery in Sasolburg.

“When his fingerprints were processed, it was discovered that Captain “KGB” Tshabalala was supposed to be serving time in prison,” said Sesoko.

Tshabalala was sent back to the slammer and while he was dismissed from SAPS, said Sesoko, “he remained active in the SAPS system as an employee”.

“After serving only about two-and-a-half years of his 10-years sentence, he was released on parole on November 2015. He applied for re-enlistment in the police on 16/09/16 and resigned on 30/09/16 so he could be put on an agent programme. Police management cannot account how this happened,” Sesoko said.

Since October 2016 Tshabalala had been “handled” by an unnamed individual based at the IT section of CI but who is not responsible for handling agents. This was done, said Sesoko, on the orders of Major-General Obed Nemutanzhela, who controls the CI slush fund.

However, the handler, said Sesoko, did not assign any projects to Tshabalala and had been instructed to continue paying him.

“The same applies to Captain Tshabalala’s colleague, Warrant Officer “Pope” Maluleke, who even took the SAPS to court for paying him as an agent while he was not doing any work. His application was to force the SAPS to give him work to do,” said Sesoko.

Another alarming case IPID is investigating is the procurement process, initiated by Crime Intelligence, a division of SAPS, and a company, Brainwave Projects 1323c trading as I-View Integrated Systems.

“During the course of investigations it was established that there were gross irregularities in the procurement process resulting in the state suffering a loss of more than R54-million,” said Sesoko.

The IPID investigation had uncovered that a R33-million procurement for software, aimed at monitoring social media sites during the #FeesMustFall protests, “did not derive value for money for the system”.

Another procurement was for another system (Daedalus) which cost R21-million and was aimed at blocking cellphone communication between suspended Acting Commissioner Phahlane and a team from North West he had employed to thwart the IPID investigation into charges of fraud and corruption.

The SAPS, said Sesoko, was attempting to derail the IPID investigation, claiming that CI information is “classified”, and refusing to hand it over.

In December 2017, a few days before the ANC’s elective conference at Nasrec, IPID had received a tip-off about yet another procurement with Brainwave Projects, worth R45-million. The amount would allegedly be used for the payment of a “grabber” surveillance system valued at between R7-million and R10-million.

“It was also alleged that such amount of money directed to I-View Integrated System was in fact to be laundered for buying of votes at the ANC conference,” said Sesoko.

IPID had engaged a number of SAPS senior officials who had confirmed that the transaction was being “pushed through at all cost”, a situation that resulted in a “strained relationship amongst senior members”.

Newly appointed National Commissioner General Khehla Sithole had been contacted by IPID which had recommended that payment be stopped immediately. IPID had also obtained video footage of senior SAPS officers meeting with the service provider.

I-View Integrated System, owned by Durban businessman Inbanathan Kistiah, was named in December 2017 in the irregular procurement of two orders for bullet proof vests, one worth R6.7-million and another worth R33-million.

“Scopa will this afternoon send letters to SAPS and Sita to offer them a right of reply to allegations made against them in an IPID presentation today. Scopa also wants to know whether Sita has continued making payments to the Forensic Data Analysts maintenance and support contract, after Parliament last year requested Sita to stop making payments to that contract, as doing so is illegal and irregular,” said Godi about another matter IPID is currently investigating and worth around R6.1-billion.

IPID has been under threat from SAPS which has, under Phahlane, attempted at every turn to throw the directorate off course, threatening to arrest IPID members as well as complainants forensic investigator Paul O’Sullivan and his partner Sarah-Jane Trent.

Earlier this month Mbalula, once a vociferous Zuma supporter, announced that he supported IPID and its head, Robert McBride. Scopa will most certainly like to hear that on the record.

The list of IPID investigations presented to Scopa on Tuesday represents only the tip of the deep-rooted criminality in the SAPS and which appears to have thrived and been encouraged as part of the nightmarish project of State Capture.

The clean-up, which is well under way, will require industrial-scale detergents as well as complete amputation in some cases. That, and a bigger allocation for IPID in Wednesday’s Budget. DM