Analysis: De Lille survives, but not out of the woods 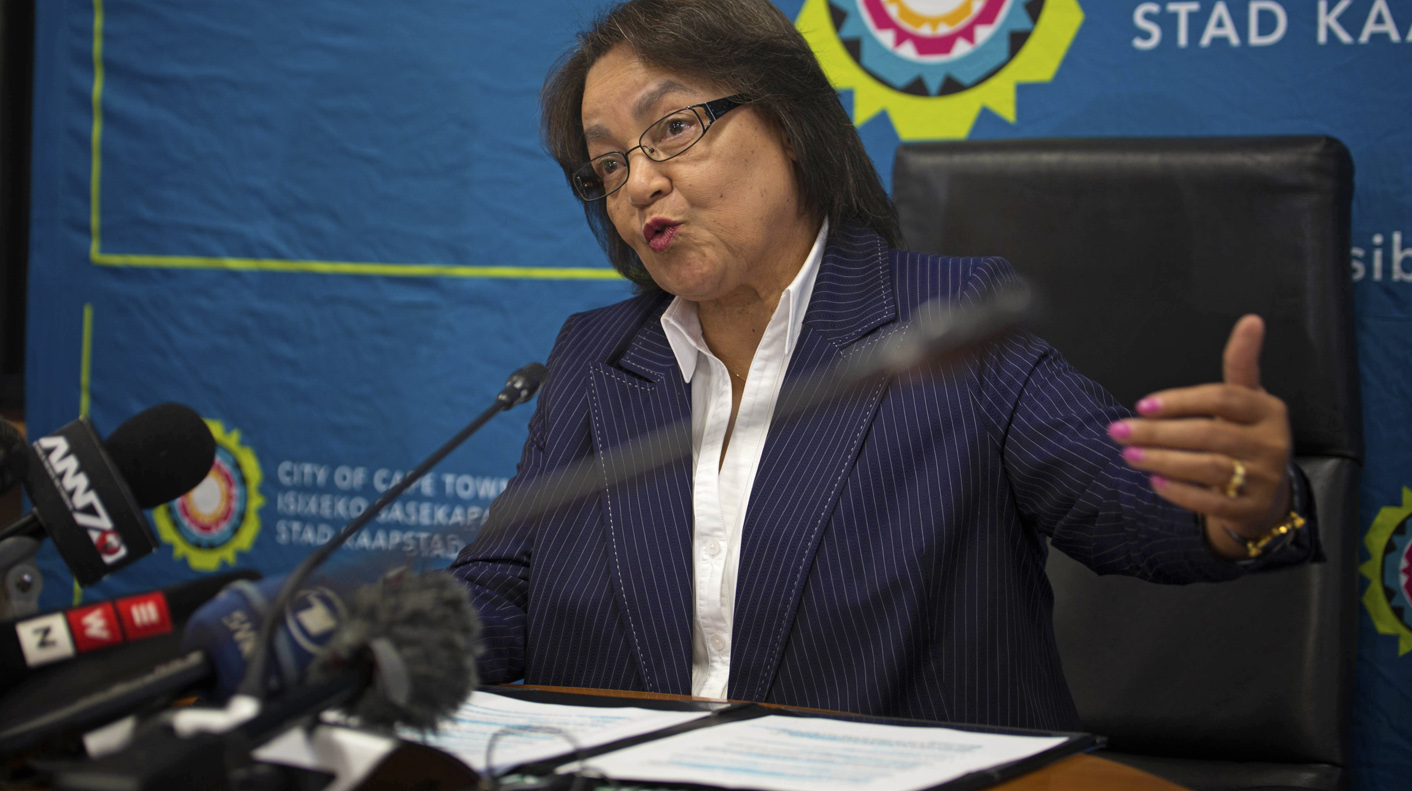 Patricia de Lille survived a motion of no confidence by one vote on Thursday in Cape Town, but her worries are far from over. Barely had the vote gone through when the DA leadership sent out a terse reminder that the charges against her stood. Meanwhile, the same opposition parties that saved her today may turn against her yet. By MARELISE VAN DER MERWE.

“Look what they’ve done to me,” a clearly emotional Cape Town Executive Mayor Patricia de Lille said to journalists in her offices on Thursday, following the failed motion of no confidence in her. She was indicating the bling put around her neck for the occasion. “I have to put my chain back on.”

De Lille, who had walked out of the special meeting called to debate the motion on Thursday, said she had felt so “battered” when she heard Speaker Dirk Smit opt for an open ballot that she came straight to her office to begin packing.

But, she added, “How does the saying go? She who laughs last…?”

De Lille said she was “relieved that a sense of justice prevailed” on Thursday and that “it took an enormous amount of bravery by the DA councillors who supported me”.

“I also thank the opposition parties for seeing beyond party lines and voting on a matter of principle,” she said.

Asked how she would proceed, given the fractured relationships within both her offices and with DA leadership, she said she had requested mediation and that “we will have to talk it out”.

“I am not a vindictive person,” she said. “I remain committed to working with all councillors and residents to continue making progress possible together and making this great city even greater.”

There was an air of celebration in the mayor’s offices – and in council chambers – on Thursday. De Lille’s supporters streamed into her office, singing hymns.

But what De Lille has described as “this very trying time” may not yet be over. First, De Lille still faces her own charges, and second, the City now faces having to try to rebuild its fractured administrative structures.

Bonginkosi Madikizela, Western Cape DA leader, responded shortly after the vote: “We have noted the outcome of today’s vote of no confidence in Mayor Patricia de Lille, a vote the mayor survived by the narrowest of possible margins.

“It is important to also note that the vast majority of DA councillors expressed their lack of confidence in the mayor and that she has survived in large part due to the support of the ANC and the other smaller opposition parties; 75% of the DA caucus voted in favour of the motion.

“This means she in effect is governing without a party mandate. This is a serious undermining of the DA and the values and the electoral mandate which we were given by the people of Cape Town.”

In addition to the likely ongoing battle with her own party leadership, this may not be De Lille’s last motion of no confidence. Speaking during the debate, numerous councillors – notably from the ANC – bemoaned what they said was interference in city matters by DA leadership.

“De Lille must go,” said ANC councillor Xolani Sotashe, “but not now. She can go on our terms, not on the white liberal agenda.”

When Daily Maverick asked Sotashe outright whether the ANC planned to table a motion of no confidence against De Lille again in future, he said it was “not off the table”.

However, he said, the party’s primary gripe was with the DA. “De Lille is not the problem, she is part of the problem. The DA administration must go,” he said. This is why, he added, the ANC had agreed to ask for the City of Cape Town to be placed under administration as a first step.

Madikizela’s reminder that the charges stand in some ways underlined the dissatisfaction that reigned in the chambers throughout the morning – as many of the councillors complained that the motion should only have been tabled after all investigations had been concluded.

The primary bugbear, raised by numerous councillors from multiple parties, was that councillors felt they were being asked to vote without all the information they needed at hand.

A second, also raised from various quarters, was concern that DA leadership was meddling in City Council matters.

“Mr James Selfe has become the spokesperson of this council. He is actually running this council,” said Sotashe.

Cope councillor Farouk Cassim termed it the “intrusion of national in council matters” and complained that his party had asked for opportunities to pose questions to the mayor and the requested meeting had never happened. He argued: “The shared wisdom is to wait for the independent investigators’ report before acting. She deserves the benefit of that short delay… rather than being made to go away. Waiting for a few days will imperil nothing.”

He said the motion of no confidence “rests on baseless and manufactured reasons”.

He did, however, say that supporting the mayor would be conditional on her ceasing “the unbecoming war with Alderman JP Smith, which is detrimental to government” and that she would have to “undertake that the relationship with the Executive Director [Craig Kesson] will be free of acrimony and ill will” because “a mayor that brings malign influence is not worthy of the confidence of council”.

He added: “A whistle-blower is a prized individual in government. We are beholden to [Kesson].”

But beyond the debate around De Lille herself, the meeting underlined the deepening fractures within the council itself – and the effect of rising tensions on the Speaker’s authority. Smit appeared to struggle to maintain order, with some councillors turning on him personally. There were multiple calls for him to maintain better order, and some accusations that he had called for an open ballot or failed to share crucial information at the DA’s behest, which Smit at times denied and at other times attempted to ignore in the interest of moving on with the meeting.

Before the apologies had been given – which were the first item on the agenda – the meeting had been disrupted multiple times, due to ANC dissatisfaction over an attendance register that had allegedly been circulated prior to the meeting. An exasperated Smit eventually moved the meeting to another venue, excluding the ANC; after more heated argument, the dissenting councillors were given the information they wanted and the meeting was moved back to chambers, with the ANC given permission to rejoin.

But the tone was set for the meeting. Dissatisfaction with the administration was vented and shortly after Smit announced the decision in favour of an open ballot and refused De Lille’s request to adjourn and reconsider, De Lille walked out.

“You have a hidden agenda of looting. The way that this meeting has been conducted speaks to the credibility of the office,” said the ANC’s Noluthando Makasi. “You have forever been investigating many issues but outcomes don’t come. This is your matter as the DA internally. The federal executive which is running this council told Capetonians they would take 60 days to sort this out, but now they are running away and they want council to do their dirty work. But the Federal Executive is calling the shots. Shame on you.”

The ACDP’s Charlotte Williams directed a warning at Smit himself. “Mr Speaker, when the DA goes after you, you are doomed,” she said, before arguing that the mayor had not yet been proven guilty.

The EFF, meanwhile, slammed the lack of order in the meeting, saying the Speaker was failing to contain the tensions.

Less politely phrased was Sotashe’s accusation that the DA is characterised by “Satanism”, using “black people as puppets” with the “Judas Iscariots of this world”.

FF+ councillor Erika Botha-Rossouw, meanwhile, said she did not understand why De Lille was so worked up over the open ballot, since a member of De Lille’s camp had allegedly phoned Botha-Rossouw the previous night to ask which way she would vote. De Lille herself accused Speaker Smit of constructing his decision to hold an open ballot almost verbatim from a letter issued to him the previous night from DA leadership. The DA’s Gabriel Twigg retorted that De Lille was trying to have a court debate in council when the matter had already been settled in court.

Councillor Ganief Hendricks of the ALJ said De Lille was “crossing the river on the back of a crocodile” by associating with the DA.

And for all the argument, the vote was split almost exactly down the middle: De Lille survived by one vote. Which means somebody has a lot of patching up to do.

Whether De Lille ultimately serves her full term is one thing. But another question – independent of who ends up being Cape Town’s mayor in the long run – is whether the city’s administration remains intact. At the moment, that’s looking just as uncertain as De Lille’s own political future. DM