Notes from the House: Veterans appeal to Ramaphosa over ‘derailed’ train systems 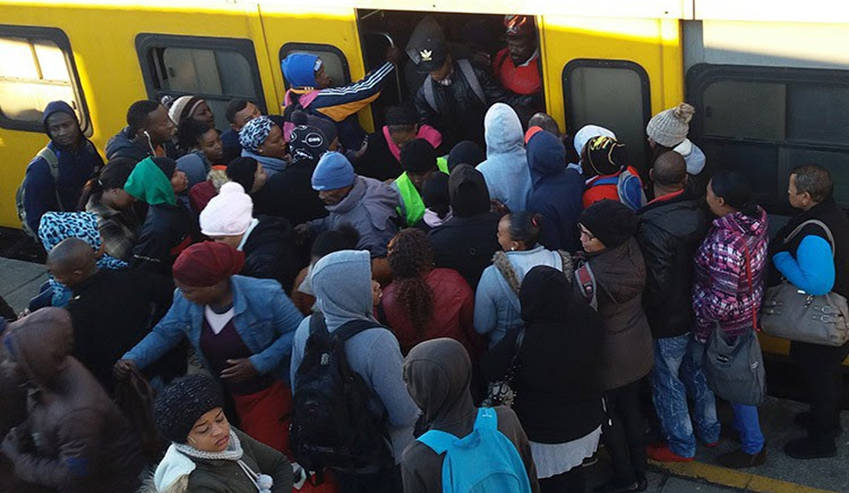 Following the no-show of the board of the Passenger Rail Agency of SA at Parliament’s Portfolio Committee on Transport on Tuesday, the UDF Veterans Network in Cape Town has delivered a letter to ANC President Cyril Ramaphosa about “the collapse of the rail system in Cape Town and beyond”. By MOIRA LEVY.

The letter alerts the ANC President to the closure of the Passenger Rail Agency of SA’s (Prasa) Central Cape Town line used by thousands of commuters from Cape Flats area like Khayelitsha and Mitchell’s Plain, which has been closed for more than a month and shows no sign of reopening.

The UDF Veterans declare in the letter, which was hand-delivered to Ramaphosa on Wednesday, that the railway service had “all but collapsed due to rampant corruption (in Prasa), comparable to the scale of corruption at Eskom and other SoEs. It has been conservatively estimated that R14-billion has been looted from Prasa”.

It points out that the railway service is a “primary form of commuter transport for hundreds of thousands of workers, scholars and students, commuting safely across the Cape Flats. Prasa’s collapse is a significant factor compounding the ongoing spatial injustice arising out of the persistent apartheid architecture of Cape Town”.

Ramaphosa accepted the letter and agreed that he would give its contents his urgent attention.

The UDF Veterans appealed to Ramaphosa to do everything in his power, both as ANC president and Deputy President of South Africa, to replace the current interim Prasa board.

They appealed to Ramaphosa to appoint Popo Molefe to a newly constituted board. Molefe, one of the founders of the UDF, had been chairperson of the Prasa board until June last year when it was sent packing by the then Minister of Transport, Joe Maswanganyi, following its active investigation into corruption and governance issues at Prasa. These had been highlighted by the former Public Protector in her report entitled Derailed.

The Prasa board under Molefe had sent detailed written submissions about allegations of corruption and wrongdoings which were crippling Prasa to the President and Speaker of the National Assembly, but had received barely any response.

“This level of corruption was accompanied by the usual process of appointing key corrupt people to key positions and pushing out skilled and experienced people who were previously running Prasa. So Prasa coffers have not only been depleted. The service no longer functions,” the vets state in their letter.

“Hundreds of commuters have died as a direct result of the dangerous and inadequate commuter trips they have to take daily. Thousands of others have lost their jobs due to the daily cancellations or late trains. Women and girls have been harassed and sexually assaulted on the overcrowded trains with inadequate security or on the lonely journey home late at night.”

The letter says Cape Town’s rail service has to get back into working order “and this can only happen with a credible, ethical and skilled board”.

The letter from the UDF Veterans asks “if it is possible to restore Popo Molefe to this position, (as) this would greatly speed up the process of rebuilding Prasa as he is already fully aware of the dire state of this SoE”.

The UDF Veterans openly declared support for Ramaphosa, congratulating him for his election to the position of ANC president and commending him for the “speed and vigour” with which he has already acted against the corruption “which has plagued South Africa and which continues to do so in many parts of the country”.

The UDF Veterans are a collection of now mostly middle-aged individuals who were once active in the United Democratic Front or UDF, which mobilised hundreds of thousands of ordinary citizens against apartheid in the 1980s. The UDF Veterans were formed last year out of a sense of personal responsibility for the collective failure of the ANC government to change the lives of millions of poverty stricken South Africans.

In its letter to Ramaphosa the UDF Veterans declare: “We have confidence in your ability, supported by the majority of South Africans, to root out the corruption that has taken such deep root in our government and private institutions. We will continue to work hard at holding all those in positions of power accountable to the principles of good governance.” DM