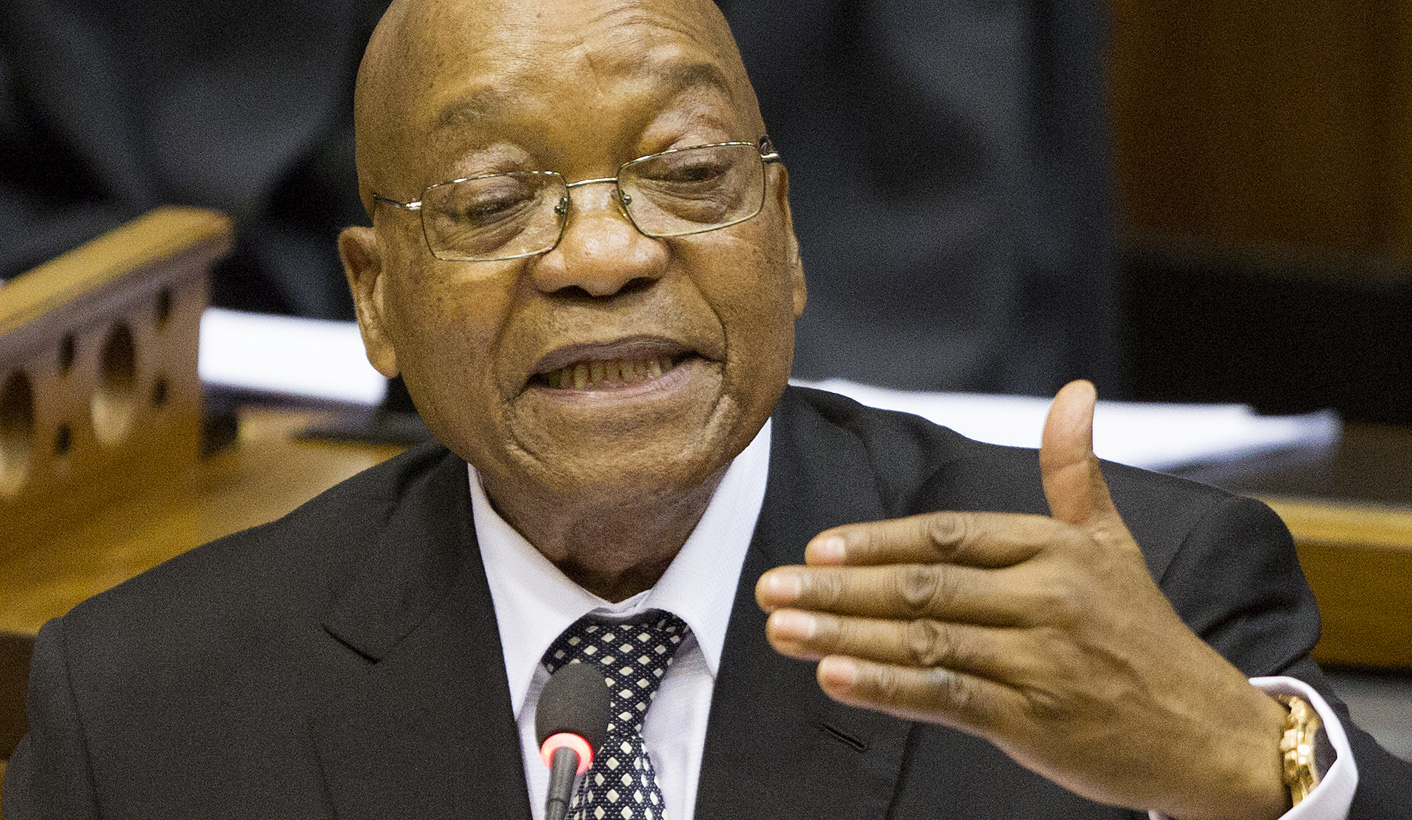 An emergency evacuation drill in the National Assembly. Possible legal action by at least two opposition parties, the EFF and the United Democratic Movement, to push for a postponement of Thursday’s State of the Nation Address – if President Jacob Zuma is at the podium. And as firm a word as any from the EFF on Monday that “there will be no SONA” without its no confidence motion happening first. All this as the ANC is chewing over Zuma’s future as South Africa’s president in what the governing party calls the “transition”, with a special urgent meeting of its highest decision-making body between national conferences, the National Executive Committee (NEC), on Wednesday. By MARIANNE MERTEN.

“Due to an emergency situation, we have to evacuate… The business of the House is suspended.” Those words triggered the parliamentary staff drill, complete with “protection officers” armed with blue and yellow flags, to leave the House should things go pear-shaped at Thursday’s State of the Nation Address (SONA).

That drill was part of the requirements of the Occupational Health and Safety Act for events that bring together large numbers of people, said Parliament spokesperson Moloto Mothapo. And as part of the SONA2108 planning it was agreed media accredited for the event would have general free movement unless there are restrictions that affect everyone such as the closing of the red carpet in time for guest to take their seats.

Political machinations aside, SONA preparations are under way. On Monday there were visibly more uniformed police in the parliamentary precinct. And the parliamentary grapevine buzzed with speculation that from Wednesday afternoon the precinct, again, would go into a heightened state of security, with a lockdown on SONA day as happened last year. At least two staffers cited visits by plainclothes security personnel – they could not say if these were spooks or police – to various parliamentary offices.

The past three SONAs were mired by ham-fisted security: the 2015 signal jammers for which State Security blamed an oversight by a junior agent to the 2017 presence of assault-rifle armed soldiers and, yet again, the bruising forced removal of EFF parliamentarians.

On Monday the SAPS seemed to tread carefully. “The deployment for the State of the Nation this year is no different to that of previous years,” was the SMS response to a request for comment on Monday.

When specifically asked of the role of Natjoints (National Joint Operational and Intelligence Structure) – it centres on the SAPS, State Security and the South African National Defence Force (SANDF) – the response was: “The Natjoints is a structure which encompasses the involvement of various government departments and role players. Therefore, those that are responsible for security of the parliamentary precinct will also be in communication with this structure before and during the event.”

There was no clear response to questions as to whether Natjoints was taking over control of the parliamentary precinct: “No, but if the Natjoints role-players are invited to attend to any need, such will be attended to.”

In previous years Natjoints publicly proclaimed its centrality in SONA security. An official statement in February 2017 stated: “The nation and community of Cape Town are urged to allow the Natjoints to execute its mandate of ensuring the safety and security of all without any interruptions and/or disruptions… All departments within the justice, crime prevention and security cluster (JCPS), as well as other critical role players, have in accordance with their mandates been activated to mobilise resources necessary to ensure that the SONA is delivered in a safe and secure environment.”

Or as a February 2015 public statement put it: “The National Joint Operational and Intelligence Structure… will today continue with its simulation exercises as part of its security readiness for the upcoming State of the Nation Address. Security planning for this event began late last year and the various role-players are very satisfied that every little detail has been attended to. The simulation exercises or dry-run is merely putting into practice what was has been drafted on paper… This event is the largest event on the South African parliamentary calendar and the successful planning for this event is equally critical.”

But eyebrows are being raised. Daily Maverick is reliably informed that members of the Parliamentary Protection Services (PPS) are accredited as “support staff”, raising questions as to what their role exactly would be. It could not be ascertained whether the so-called bouncers – the white-shirted staffers, many of whom were recruited from the SAPS public order division, colloquially known as riot police, in 2015 – had been differently accredited to be the frontline security. While the PPS was established soon after the democratic Parliament was elected to ensure safety and security in the parliamentary precinct, tensions in the service have risen since the recruitment of the bouncers, who are described officially as chamber support staff in Parliament’s organogram. A complaint over the bouncers’ better terms and conditions is pending before the Labour Court.

SONA2018 is held under the theme “Making your future better – learning from Madiba”. And anecdotes of Mandela’s respect for Parliament still make the rounds. They include the one how South Africa’s first democratically elected president would often just pop in to sit in the House to listen to parliamentary debates after informing the Speaker, then Frene Ginwala, even if she maintained that there was no need.

There was also a different take on SONA. Council for the Advancement of the South African Constitution (Casac) Executive Director Lawson Naidoo, one of Ginwala’s former advisers, said there was a push to bring in citizens to give life to “the legislative and constitutional expressions of the people’s assembly”.

“One of the things we did after 1994 was demilitarisation. The SONA before 1994 was highly militarised…” said Naidoo of the discussions between the national legislature and presidency at the time. “We were willing to accept there would be a level of (ceremonial) military involvement.”

A SONA tradition dating back to those years is that of the president walking up the red carpet past the civil guard of honour, including school children and representatives of non-governmental organisations. In the past two SONAs Zuma did not step out of his vehicle, which drove up the red carpet.

This year, Parliament said it budgeted R4.3-million for SONA from its own monies. During a briefing on the EFF 2018 programme broadcast on eNCA, party leader Julius Malema said: “Why do you want to spent R4-million on a SONA that will not be listened to? That man (Zuma) is not going to tell you anything!”

As the EFF said it was considering legal action, the United Democratic Movement (UDM) had already briefed its lawyers. It remains to be seen whether the courts would entertain any postponement of SONA as the judiciary consistently ruled, even when it found parliamentary action invalid, that it was up to Parliament to get its house in order.

“Your request is receiving consideration and once a decision is made, it will be communicated to you,” was National Assembly Speaker Baleka Mbete’s reply, seen by Daily Maverick.

By all accounts Sunday’s meeting between officials and Zuma did not achieve the desired resignation. This has forced the ANC back to the drawing board. On the eve of SONA there will now be a special meeting of the National Executive Committee, the ANC’s highest decision-making structure between national conferences. That NEC on Wednesday, according to an ANC statement, will discuss preparations for SONA and what it described as “management of the transition between the 5th and 6th administration of government”.

Malema on Monday said Zuma’s exit was “inevitable” and just a question of when. UDM leader Bantu Holomisa took a philosophical approach, saying Zuma’s exit should have been a straightforward ANC matter.

“If they’ve taken a decision, there’s no need to ask him and plead with him,” said Holomisa with regards to Sunday’s meeting of the officials and Zuma. “It just tells you why they’ve been kissing his feet for nine years.”

Caught up in all this is Parliament, and SONA2018. DM

Photo: South African President Jacob Zuma replies to the debate about his State Of The Nation Address (SONA) in the parliament in Cape Town, South Africa, 16 February 2017. EPA/NIC BOTHMA