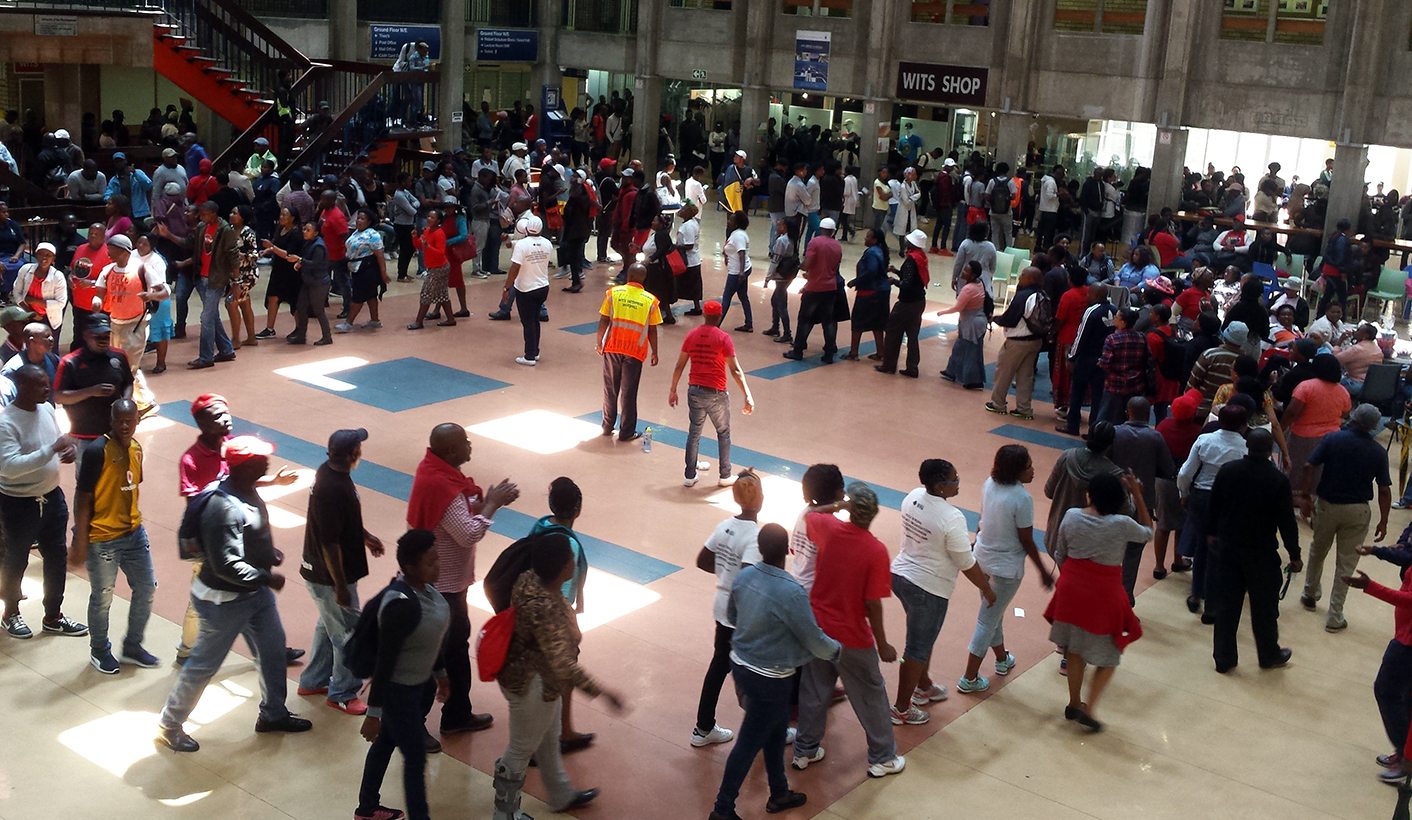 A workers’ strike at Wits University has entered its second week with negotiations between unions and management in deadlock. By NKATEKO MABASA.

Workers at Wits University have threatened to make the institution ungovernable if their demands for a 10% increase in salary and improved working conditions are not met.

On Sunday, the unions had agreed with Wits on a compromise of a 7% increase for senior management and a 9.2% on lowest earners in the grades 16 and 17 levels. Furthermore, medical aid and night shift compensation were on the table for demands.

On Monday morning the unions went into a meeting to formalise and sign on the agreed terms. The National Union of Metalworkers of South Africa (Numsa) and the National Education, Health and Allied Workers Union (Nehawu) reached a deadlock with university management over the details of the workers’ demands.

The meeting with the university lasted the entire day and ended in a stalemate. Unions kept adding more demands for workers, although workers were becoming frustrated by the wait and secrecy. “How long does signing a document take?” one worker said.

“Negotiations continued yesterday and some headway was made. However, no agreement has yet been reached,” said Buhle Zuma, Wits Senior Communication Officer.

Lectures are set to commence on Monday, 5 February.

The university had initially offered a 6% increase as it said it is under financial strain. This caused dissatisfaction among the workers and staff, leading to the protest.

The Free Education announcement by President Jacob Zuma has led universities to scramble for cash as they try to cover operational expenses and meet the growing demands and student intake.

“The university has put in place contingency plans and registration processes have not been affected today. Orientation Week for students continues without disruption,” said Buhle Zuma.

Although the university has interdicted the use of violence and intimidation of staff within the campus by the protesters, the workers have pledged to make the university ungovernable. Trash is seen all over the campus and hallways have been flooded with water from opened taps.

Shirona Patel, university spokesperson, expressed disappointment over the strike as what they had proposed was “the second highest offer” in the high educational sector.

The unions and Wits management had reached an agreement in 2016 as a result of outsourcing protests, aimed at employing workers within the university instead of outside contractors. It was agreed that workers would receive a 12% increase in their salaries come 2017.

The salary negotiations that commenced in March 2017 bore no fruit for the workers as unions and management failed to reach a satisfactory agreement.

On Monday evening, Paati Sam Mangena, Nehawu chairperson, Wits branch, came out to make an announcement to an exasperated crowd. He announced that he had been sent by the deployed task team to asked workers to “wait, and wait patiently” as the unions had brought in their own legal experts to check the document before it would be signed.

Furthermore, Mangena announced to the now dwindled crowd that they also wanted grade 16 and 17 levels to be scrapped and workers moved to grade 15.

“When workers were moved from being outsourced to being insourced by the university they were put at entrance level salaries (grades 16 and 17).

Workers complained that since this would be deducted from their salaries, and said the 9.2% increase wouldn’t be enough. Others who have more serious medical conditions fear that their scheme will be too high and take a huge chunk of their already small salary.

The union also demanded that night shift pay be increased from R300 to R800 a shift.

But workers expressed concern over the length of the strike and its impact on their families.

A dining hall worker, who did not want to be named, told Daily Maverick that he has been out of work for nearly two weeks. “I am not going to be paid for January because of this and we just came back from holidays,” he said. He earns R7,200 a month and is in the grade 17 level of lowest earners.

The unions had suggested to the workers that the unpaid protest days would be taken from leave days. Workers are entitled to two days leave a month. One worker shouted that he did not have any leave days left.

The following day, Tuesday, Columbus Ncuthe, Nehawu Gauteng provincial chairperson, announced that they were also negotiating for an annual salary to be increased from the current R94,000 to at least R124,000 which would correspond to a higher grade status.

The strike continues as unions remain adamant about their demands for workers and what they can achieve. “We want management to put on paper what they have agreed without complicated English that confuses us,” said Ncuthe.

It is only January. This is set to a testing year for institutions of higher learning. DM