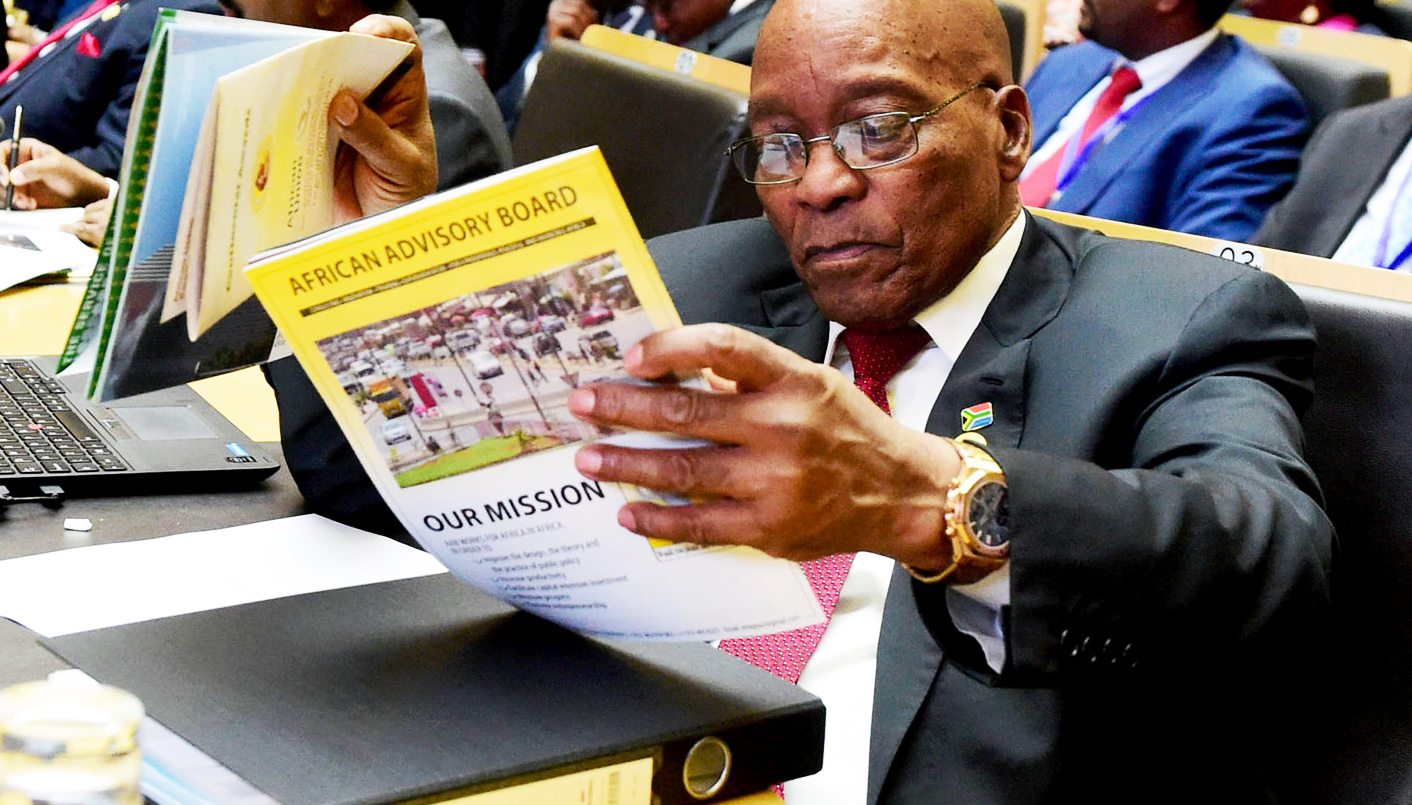 On Saturday night there was a swanky dinner in Ethiopia to launch the worldwide celebrations of former president Nelson Mandela’s 100th birthday. Many said that the lacklustre event was also meant to be President Jacob Zuma’s farewell to the continent. By CARIEN DU PLESSIS in Addis Ababa.

Name cards at empty seats bore testimony to the score of presidents and former heads of state who just couldn’t make it to the Sheraton’s Lalibela Grand Ballroom on Saturday night. Former Nigerian president Olusegun Obasanjo was one, and former South African president Thabo Mbeki another.

They were both in Addis Ababa, but evidently had more pressing engagements that night. So, apparently, did the heads of state of 53 of the other African Union member states (although, admittedly, not all are attending the summit). Kenya, however, had the decency to send a representative in the form of foreign minister Amina Mohamed, who is serving her last continental stint before going home to her demotion to education minister.

(Kenyan president Uhuru Kenyatta recently visited South Africa to attend the ANC’s birthday celebrations in East London, where he and Zuma stuck together, arriving unfashionably late for both the dinner and the rally there. Kenyatta also met deputy president Cyril Ramaphosa, who replaced Zuma as ANC president last month, and they, unusually, talked government business.)

Some of Zuma’s faithful ministers were in the hall. International relations minister Maite Nkoana-Mashabane was MC (her flowery language sometimes made the French interpreter stumble over his translations), and public service and administration minister Faith Muthambi and state security minister Bongani Bongo were among those seated at one of the 35 tables-for-10, together with former justice minister Brigitte Mabandla, who was there with other African Peer Review Mechanism staffers.

AU chairperson and president of Guinea, Alpha Condé, AU Commission chairperson Moussa Faki Mahamat, as well as a number of the AU commissioners, were there. A few dozen South African officials, who were the only ones to remain behind later and dance out one or two South African beats like Vulindlela before disappearing, were also there.

It would, however, be generous to say the hall was half full.

Most people arrived after 21:00 because meetings at the AU ran late during the day and consequently ended late. There were also horrendous traffic jams caused by police blocking some roads in Addis so that dignitaries could have free passage, but obviously if those presidents had wanted to attend, the traffic wouldn’t have been an obstacle to them. Could it be that, now that he is in need, Zuma has few friends on the continent?

Zuma stoically and courageously ploughed through a passable speech, pausing after every sentence or two to give the French interpreter a chance to speak. There were no attempts to deviate from what was printed on the paper, or to charm the audience with off-the cuff remarks or jokes, and the audience reciprocated at the end of the speech by applauding not more than would be polite.

There wasn’t much saying goodbye from Zuma’s side, although he did joke in a closed APRM meeting a few days before, when commenting on Sierra Leone president Ernest Bai Koroma’s bidding farewell to the panel. by remarking that there were others present who might be attending their last summits as well.

On Mandela, Zuma said in his speech:

“The year 2018 presents an opportunity for Africa and humanity as a whole to remember the legacy of this great icon, and to reflect on how we can make a meaningful contribution to promoting the ideals, principles and values that President Mandela stood for, ideals that were informed by Africa’s quest for freedom and prosperity,” Zuma said. “Before Mandela became a global icon, he was an African and believed strongly in the African value system of ubuntu, which had a tremendous impact on his leadership and life in general.”

Zuma told the audience that the theme for the centenary celebrations is “Be the Legacy”, and his tone did not give any hint that he was internalising any of what he was reading.

There was also the inevitable pan-Africanist angle. Zuma said: “Madiba remains the epitome of peace, hope, humility and reconciliation. He stands as an embodiment of the highest standards of the African Union. As an organisation upon which the people of Africa look for inspired hope, we dare not linger. The bar is set high.” Irony, again.

“As we march with zeal towards 2063, we should drink from the fountain of Madiba’s wisdom and values, and revive ourselves, because the Africa we want is within reach.”

Condé and Mahamat spoke politely about the legacy of Mandela, using adjectives such as “illustrious” and talking about his “intertwining the races of South Africa” and bringing “equity and justice”. Bizarrely, during these speeches the waiters ushered diners towards the buffet tables outside the ballroom to start serving themselves delicacies ranging from sushi, prawns, meats and traditional Habesha food to injera, South African buffet food such as pap, and a massive pudding table.

The speakers were polite to Zuma, with Condé mentioning that he, through launching Mandela’s centenary, was leading the way to show that the continent could be more prosperous.

Mahamat in his speech said Africans could live up to Mandela’s legacy by “working resolutely and decisively for the unity, integration and reform of Africa”.

He said he expected a lot from leaders like Zuma and Condé during the summit, “so that they can take major decisions so that they can change the plight of African peoples so that we can have the Africa we want”.

In between speeches, Nkoana-Mashabane also had her say, thanking the world for the role played in South Africa’s freedom struggle. She also, at one point, somewhat bizarrely distinguished between “the people of the real South Africa” and the “new South Africa”.

She said: “People from the real South Africa pride themselves on being the product of the freedom struggle that started in SADC [Southern African Development Community] and the world.”

It’s not entirely clear what she meant, but it could have been a stab at anybody ranging from Mandela to Ramaphosa to those who don’t vote for the ANC. Mandela was considered to have been the father of the “new” South Africa in 1994 and Ramaphosa has similarly punted himself in his campaign for the presidency as someone who could bring reconciliation.

The diners left almost as swiftly as they arrived, and the festivities were limited. Hotel staff almost instantly moved in to clear the tables, and proceeded to tip the remaining food, enough for about 200 diners, into big rubbish bags. In a country where millions rely on food aid and many go to bed hungry, Madiba would not have been proud. DM

Photo: President Jacob Zuma attending the Opening Session of the 30th Ordinary Session of the Assembly of Heads of State and Government of the African Union (AU) in Ethiopia, 28 January 2018. (GCIS photo)