Eskom Inquiry: Former CFO Anoj Singh joins the growing queue of the ‘I don’t know’, ‘I can’t say’, ‘It wasn’t me’ 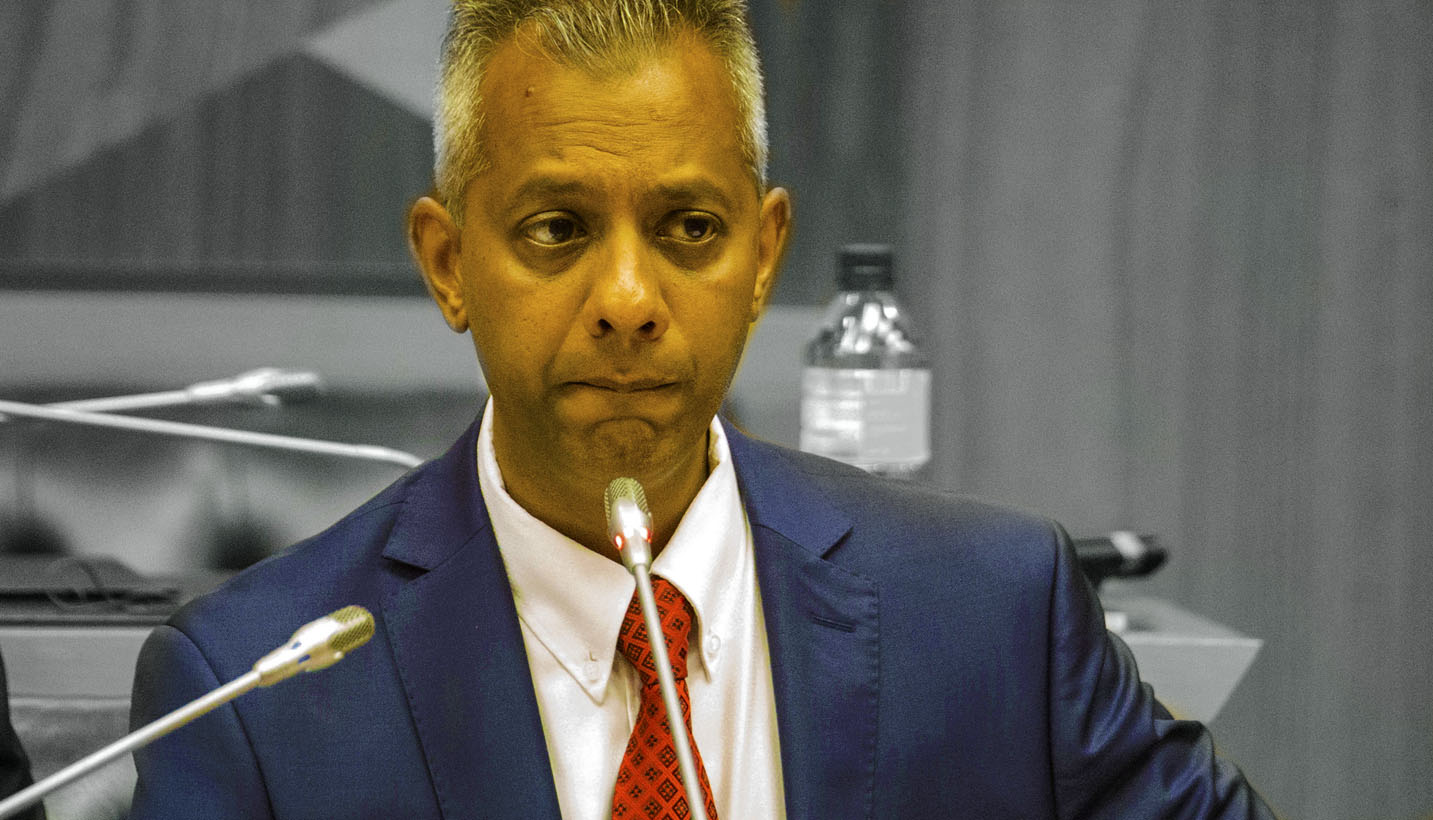 It wasn’t me. I was not obliged to do so. I did not know. There is an ever-lengthening queue of senior officials from State-owned Entities (SoEs) and government departments – throw in a few politicians like former Gauteng Health MEC Qedani Mahlangu or Public Enterprises Minister Lynne Brown – claiming ignorance and invoking tunnel vision of their governance duties to disavow responsibility when things go wrong and their actions come under public scrutiny. On Tuesday, Eskom’s former Chief Financial Officer Anoj Singh, who resigned on the eve of testifying before Parliament’s inquiry into State Capture, assumed a prominent position in that queue. By MARIANNE MERTEN.

Eskom faces dire financial troubles, including suspension from the Johannesburg Stock Exchange, unless it releases its already delayed mid-year financial statements by month’s end, and a possible World Bank default letter. The power utility must raise around R20-billion in coming weeks, according to The Herald, to avoid these consequences. And if the World Bank issues that default letter, Eskom must pay its just over R45-billion loan, triggering the potential cross-default call-in of other loans issued to the power utility against the existing government guarantees of R350-billion.

It’s a similar position to the one SAA found itself in last year when lenders proved reluctant to extend loans in the face of persistent governance and financial turmoil documented not only in media reports, but also official government documents and in Parliament. While SAA would get a bailout – Cabinet discussed selling off some or all its Telkom shares, according to a leaked memo, even if the October Medium-Term Budget Policy Statement (MTBPS) was light on details – Eskom is set to draw the short straw.

Finance Minister Malusi Gigaba in his maiden MTBPS in 2017 warned that Eskom remained a “significant risk to the entire economy”.

Just before he joined Deputy President Cyril Ramaphosa to sell South Africa at the World Economic Forum (WEF) in Davos, Switzerland, this week, that language was stepped up. Government could not afford to bail out the power utility, according to EyeWitness News, and Eskom could “collapse” the South African economy, it emerged at Friday’s pre-WEF breakfast meeting.

At the weekend the Eskom board was swapped out, in no small way because its lenders drew a line in the sand – as had happened, though less dramatically, at SAA when its chair Dudu Myeni who also chairs the JG Zuma Foundation, was removed late 2017.

By Monday, Eskom in a media statement confirmed its CFO Anoj Singh had resigned with immediate effect. Amid reports of increasing pressure on Eskom Group Chief Executive Matshela Koko – a narrowly defined conflict of interest disciplinary inquiry cleared him to return after being suspended for facilitating contracts to a company run by his daughter – Eskom Group Capital Executive Prish Governder resigned with immediate effect on Tuesday, as confirmed publicly by Eskom spokesperson Khulu Phasiwe. Like Koko, Govender had first been put on special leave, then suspended in the second half of 2017 but later cleared amid revelations of Eskom’s dodgy dealings, including its R1.6-billion payment that ultimately allowed Gupta-linked Tegeta to purchase Optimum coal mine from Glencor with a heavily discounted fine and payments to the Gupta-linked Trillian Capital Partners in its off-the-books dealings with McKinsey.

Govender’s resignation emerged just as Singh was telling MPs he had always acted according to his job specifications. It was the Eskom board tender and/or investment and finance subcommittees that approved the Tegeta deal; coal prepayment and Trillian and McKinsey contracts had all been approved by the board and its committees. Or as his written submission to the parliamentary inquiry said: “… my actions as CFP were reasonable and rational, were executed with due care and skill and benefited Eskom”.

But it came unstuck in several places.

First, on the Absa guarantee as part of the Tegeta Optimum deal that had Eskom board members baffled, as former non-executive board members Venete Klein and Viroshini Naidoo testified before the parliamentary inquiry last year. But Singh had an answer to that, after confirming that the bank guarantee for the deal never made it to any full board meeting even though he was part of the team preparing a submission to board directors.

“The responsibility of that (reporting to board) would fall in the (Eskom) Treasury environment,” said Singh.

Then there were questions about how the R2.1-billion fine on the Optimum deal, which was non-negotiable in discussions with a second interested buyer, was discounted to R577-million when the Gupta-linked Tegeta bought the mine. This came despite a “firm” decision by the Eskom board on this R2.1-billion fine, according to earlier testimony before the parliamentary inquiry by former Eskom Chief Executive Brian Molefe, who retired/resigned/went on special leave from 1 January 2017 following the release of the Public Protector’s State of Capture report.

“I’m not aware of the date when this (firm board decision) changed, if it changed,” Singh told MPs. “The only time I became aware of it was when the board gave direction… Whatever preceded this I’m not aware and was not aware.”

As far as Singh was concerned, the penalty was something that needed to be determined and quantified subject to arbitration – and, according to him, “that’s how Eskom arrived at the R577-million (penalty)”.

But there was that email dated 22 November 2015 from Eskom board member Mark Pamensky, who also was part of the Guptas’ Oakbay company. Addressed to Atul Gupta and others, it stated, “Please make sure the R2-billion claim by Eskom is withdrawn….” or that the seller would pick up the penalty. After it was read out to MPs, Singh said: “This is pretty much common sense to me.”

And then there was the R400-million so-called signature fee Eskom incurred in a deal with Huarong Energy Africa in March 2017 to secure offshore financing. Under questioning by inquiry evidence leader Advocate Ntuthuzelo Vanara as to why Singh signed the deal on 14 March 2017 when advice raised concern over “onerous” financial consequences to Eskom, Singh said he was not aware of that document. “I’m not aware of that legal review. I don’t recall anyone raising concerns prior to me signing.”

No, he did not read Friday’s Business Day report on this. “I was called quite late in the evening by my mother,” Singh told MPs, adding that the experience of the past six months since being first placed on special leave and then suspended had not been pleasant.

With regards to the Tegeta R600-million pre-payment deal, it emerged that Singh signed it off on 11 April 2016 following a board resolution and subsequent meeting where details were discussed. Where are the minutes of that meeting, asked Vanara. “It didn’t occur to us to keep minutes,” said Singh, who appeared to take exception when the evidence leader quickly followed up with a question as to why “a finance director of Eskom, duly mandated by a board, goes into a meeting with the attitude not to leave a trace”. Singh replied that “it proved value for Eskom” and the meeting’s discussion led to an agreement that was reduced to a contract.

Public Enterprises Minister Lynne Brown is on public record as saying she had been misled by Eskom, and Singh specifically, with regards to information on the power utility’s deal with McKinsey and Trillan. But Singh also denied this on Tuesday. “I still maintain that we did not mislead in terms of the responses to the questions,” he told MPs. “The answers to the questions were accurate, based on the questions that were posed.”

Brown, who’s been savaged over her role in the Eskom governance and financial debacle, may have something to say about that – even if her own attitude towards the parliamentary inquiry seems conflicted at best.

Singh testified under oath before Parliament’s public enterprises committee inquiry into State Capture a day after former Gauteng Health MEC Qedani Mahlangu appeared before the Life Esidimeni arbitration hearings into the death of 143 mentally ill patients who were transferred to other care facilities run by under-capacitated and under-funded non-governmental organisations the department had licensed at the last minute, if at all. Her line? “I never received information that the project was at risk, or that implementation of the project will threaten lives of the patients. In general I received constant positive reports,” said Mahlangu, adding she had received only positive information.

And during his later question slot, Gordhan effectively read the charge sheet against Singh into the inquiry record, citing a plethora of violations of the Public Finance Management Act (PFMA) by the power utility finance tsar.

“Do you know you are a delinquent director?” asked Gordhan.

Said Singh: “In each of the transactions undertaken we demonstrated value to the company… demonstrated shareholder value.”

But that’s the broken record message that Singh stuck on during his more than seven-hour grilling before MPs.

Singh, who earned a guaranteed R4.6-million a year before any incentives, bonuses or other additional earnings, maintained: “I’m indeed proud of what we achieved at Eskom.” DM