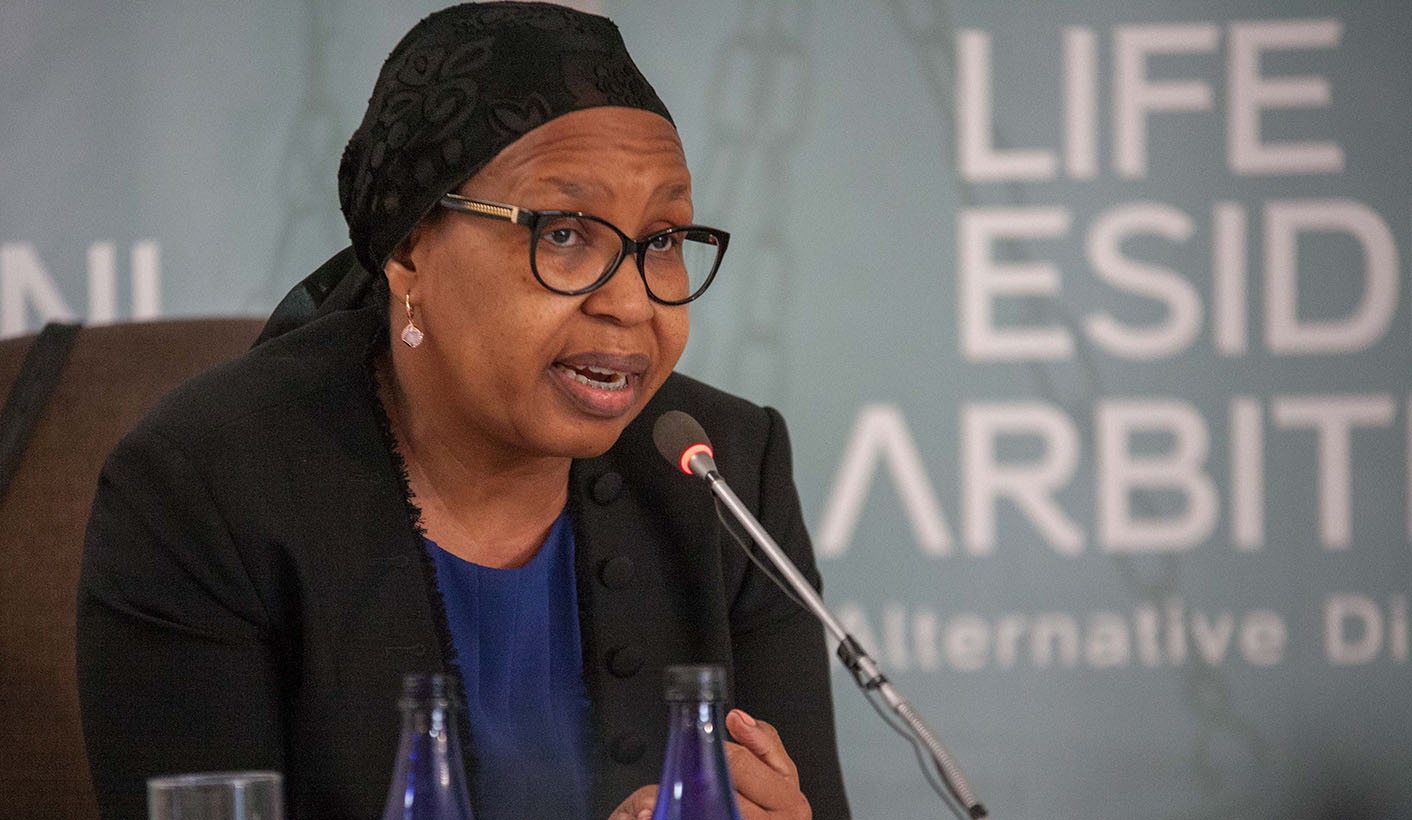 The Life Esidimeni arbitration was delayed for weeks to hear Gauteng’s former health MEC testify. Under cross-examination on Monday, in front of the families of 143 dead psychiatric patients, she wavered between ignorance, half-truths and deception. By GREG NICOLSON.

Qedani Mahlangu claimed to have acted swiftly after she was told in September 2016 that 36 patients had died after being moved from Life Esidimeni to NGOs across Gauteng. She announced the deaths in the provincial legislature on 13 September (she was wrong: 85 patients had, in fact, already died) and said she had contacted the health ombudsman on 14 September requesting he investigate.

“Yes it’s true that I initiated the investigation,” she said at the Life Esidimeni arbitration in Johannesburg on Monday. She cited dates and details of texts she had sent Health Ombudsman Professor Malegapuru Makgoba on the morning of 14 September, claiming that he responded, “Well, I don’t think it’s necessary.” She spoke to Health Minister Aaron Motsoaledi who that afternoon convinced Makgoba to take action.

The story portrays the former MEC as concerned and caring, but the health ombudsman disputed her version of events. “The first SMS that I have on my cell [from Mahlangu] is on 15 September,” he said on Monday. Makgoba released his report last February and found that at least 94 of 1,400 patients had died after being moved from Life Esidimeni in 2016.

The death toll has since risen to 143; more than 50 patients are still missing or unaccounted for. Makgoba’s report found that Mahlangu and other senior officials acted negligently. He recommended the current arbitration be established to promote reconciliation and determine financial compensation due to the relatives of those who died.

Makgoba said his investigation began after Motsoaledi called him with the request on 14 September 2016 as the minister was on his way to the airport, headed to a United Nations meeting in New York. SECTION27 also requested he intervene. Makgoba said he spoke to Mahlangu on 15 September about the logistics of preparing his investigation.

He said Mahlangu was implicated in the Life Esidimeni scandal so could not at the same time have initiated an investigation. He said Motsoaledi had told him he would tell Mahlangu to co-operate, which is in complete contrast to her testimony.

Mahlangu will continue to face questions on the issue when the arbitration resumes on Wednesday, but what appeared to be an attempt to deceive the arbitration’s chair, former Deputy Chief Justice Dikgang Moseneke, was just one of a number of half-truths or lies she told on Monday to avoid facing responsibility for a project she championed.

She distanced herself from “operational” activities while blaming officials in the health department for misleading her. Mahlangu was the face of the plan to move Life Esidimeni patients into NGOs and home care, called the Gauteng Mental Health Marathon Project, and had to explain it in the Gauteng legislature. She denied she had misled the legislature when answering questions.

In November 2015, she told legislators that more than 1,000 patients would move to Weskoppies Hospital, Sterkfontein Hospital, Transvaal Memorial Institution, Old Germiston Hospital, Dan Pienaar, and Tshwane District Hospital, but an investigation by the South African Depression and Anxiety Group (Sadag) found that the facilities were either full, unsuitable to care for the patients, or derelict.

Sadag wrote to Mahlangu and she acknowledged the letter but never acted on the concern. On Monday she said former Gauteng health department head Dr Barney Selebano and mental healthcare director Dr Makgabo Manamela gave her false information. “I was never given any sense of doubt that the information given to me was incorrect,” she said, claiming only to have been acting on the information of departmental staff. She said she may not have read Sadag’s advice.

“These NGOs are dishonest,” she said to staff at the time regarding Sadag’s pleas. She instructed Selebano and Manamela to contact the legal department. On Monday she claimed she was not suspicious of civil society groups, but could not answer why she and the department treated them with contempt.

DA shadow MEC of health Jack Bloom said if Mahlangu was honest about the lack of available beds for patients in November 2015, deaths could have been prevented. “Had she replied truthfully the whole project could have been stopped.” He added, “Either she’s totally stupid, or she kept herself ignorant, or she knew.” Either way, she was negligent.

“I did not think, Justice, that I was dishonest to the legislature,” Mahlangu said under cross-examination by SECTION27’s Adila Hassim, who represents the families of the deceased. Hassim asked why Mahlangu told the legislature last year that there had only been one complaint about an NGO, based at the Cullinan Care and Rehabilitation Centre.

Two weeks earlier Mahlangu acknowledged receipt of a letter complaining about the Precious Angels NGO, where almost 20 patients died, and a morgue in Atteridgeville. She could not say why she withheld the complaint from the legislature and again tried to blame Selebano and Manamela. Officials speaking at the Life Esidimeni arbitration have all tried to divert personal blame, probably fearing potential criminal charges.

Mahlangu, speaking for the first time since she resigned, rejected the findings of Makgoba’s report, which said she was reckless and negligent. “I do not agree with the ombud when he has a finding against me that I was negligent, reason being is that I was not an administrator.” She was only the political head and couldn’t intervene in operational activities, she claimed.

The former MEC is said to have been the driving force behind the deadly plan and had created a culture of fear that shut down opposition within the health department. “The MEC is alleged by many to have said her ‘decision was final and non-negotiable and the project had to be done’, she left no room for ‘engagement’,” found the ombudsman.

Mahlangu said she did not appeal Makgoba’s findings as she had taken political responsibility by resigning. She then went to study in the UK but denied she was running away from the arbitration and said she had not received a golden handshake to resign and that government was not paying for her studies.

The Treatment Action Campaign demonstrated outside the arbitration on Monday, calling for officials to be held accountable and the province to improve its struggling healthcare system. Premier David Makhura has committed to fixing the system. Makhura is due to testify at the hearings at the end of the month. Mahlangu in her testimony has suggested he knew more about the Life Esidimeni plan than he has revealed.

Mahlangu was an evasive and combative witness on the first day of her testimony. It’s unlikely she will put truth and justice over self-interest, but as Bloom said, the contradictions in her evidence are becoming clear for all to see. DM