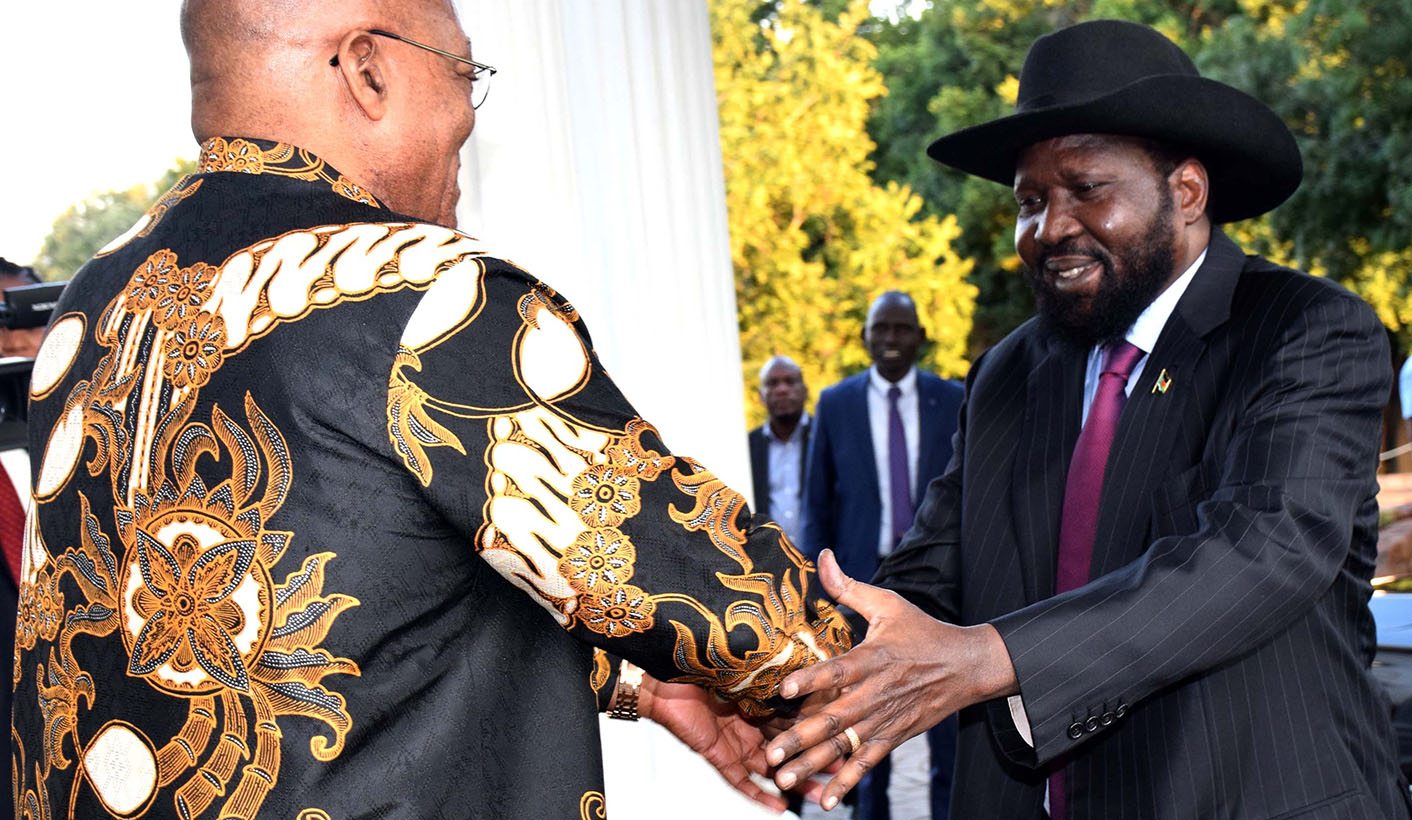 South Sudan’s President Salva Kiir has spent three days in Pretoria, updating President Jacob Zuma and Deputy President Cyril Ramaphosa about the troubled peace process in his country, which has been wracked by civil war since December 2013. By PETER FABRICIUS.

South Sudan’s President Salva Kiir’s government has dismissed speculation that he visited South Africa to meet his arch-rival and former deputy Riek Machar, who is living in enforced exile in the republic.

Kiir’s ambassador to Pretoria, Philip Jada Natana, said Kiir had come to South Africa to brief Zuma and Ramaphosa – who is South Africa’s Special Envoy to South Sudan – because of South Africa’s close involvement in the peace process.

He recalled that South Africa had been playing a role in all three tracks of the efforts to end the bitter fighting, mainly between Kiir’s SPLM faction and that of the “SPLM-In Opposition” which Machar headed until he was replaced when he couldn’t return from South Africa. The South African government is part of the main peace negotiations being conducted by the Intergovernmental Authority on Development (IGAD) which represents the governments of north-east African countries.

South Africa was appointed by the African Union (AU) to the “IGAD-Plus” group of countries to support IGAD’s efforts at mediation.

Natana told Daily Maverick that South Africa was also helping the internal national reconciliation dialogue in South Sudan which includes most, though not all, political parties. He said that last October South Africa had hosted a retreat for these parties.

And Natana noted that the ANC was also participating in efforts by ruling parties sympathetic to the ruling SPLM to mend the splits in the party which are the root of the civil war. South Sudan came into being in July 2011 by seceding from Sudan.

In 2013 Kiir fired his deputy Machar and other ministers, suspecting them of plotting a coup. In December of that year fighting erupted in the capital, Juba, between Kiir and Machar’s soldiers and soon spread across the country, taking on an ethnic dimension which pitted Kiir’s Dinka people against Machar’s Nuer. Tens of thousands have been killed, many raped and even more displaced either internally or to neighbouring countries.

In August 2015 the warring parties signed a peace agreement, including a ceasefire and an agreement for Machar to return to his position as deputy president in a new unity government. But the accord did not last long and new fighting erupted.

In 2016 Ethiopia, Sudan and other countries in the region decided that Machar would have to be taken out of the equation if peace was to be restored. They refused him entry into their countries and therefore into the region when he tried to return from medical treatment in South Africa.

Pretoria concurred with this strategy and effectively placed him under house arrest in South Africa. His SPLM-In-Opposition meanwhile replaced him as its leader and as deputy president in the new unity government.

Machar’s absence has not ended the fighting as hoped, though. New splits and rebel groups have emerged, complicating the peace efforts. Last December IGAD launched a “revitalised” peace process, including a new ceasefire.

Natana said Kiir wanted to update Zuma and Ramaphosa about the new process, ahead of next week’s African Union summit in Addis Ababa where it would be discussed. Kiir sought the support of the two South African leaders for the peace process as this would be vital for its success.

Among the new elements he informed them about was the new rebel groups which had emerged during the fighting and which were now being brought into the peace efforts.

Natana said the second round of the revitalised IGAD peace process would take place at Addis Ababa, starting in the first week of February. The mediators would try to persuade all the antagonists to make the December ceasefire permanent and to discuss governance problems.

Ambassador Natana said Kiir had also congratulated Zuma on achieving a smooth transition of power in the ANC to Ramaphosa. “We were anxious about that transition because we know political transitions can go wrong,” he said.

Natana insisted that Kiir had not come to South Africa at the weekend to hold peace talks with Machar. He said it was the IGAD countries which had removed Machar from the South Sudan peace process and so it would be up to them to decide if and when to allow him back into it. DM