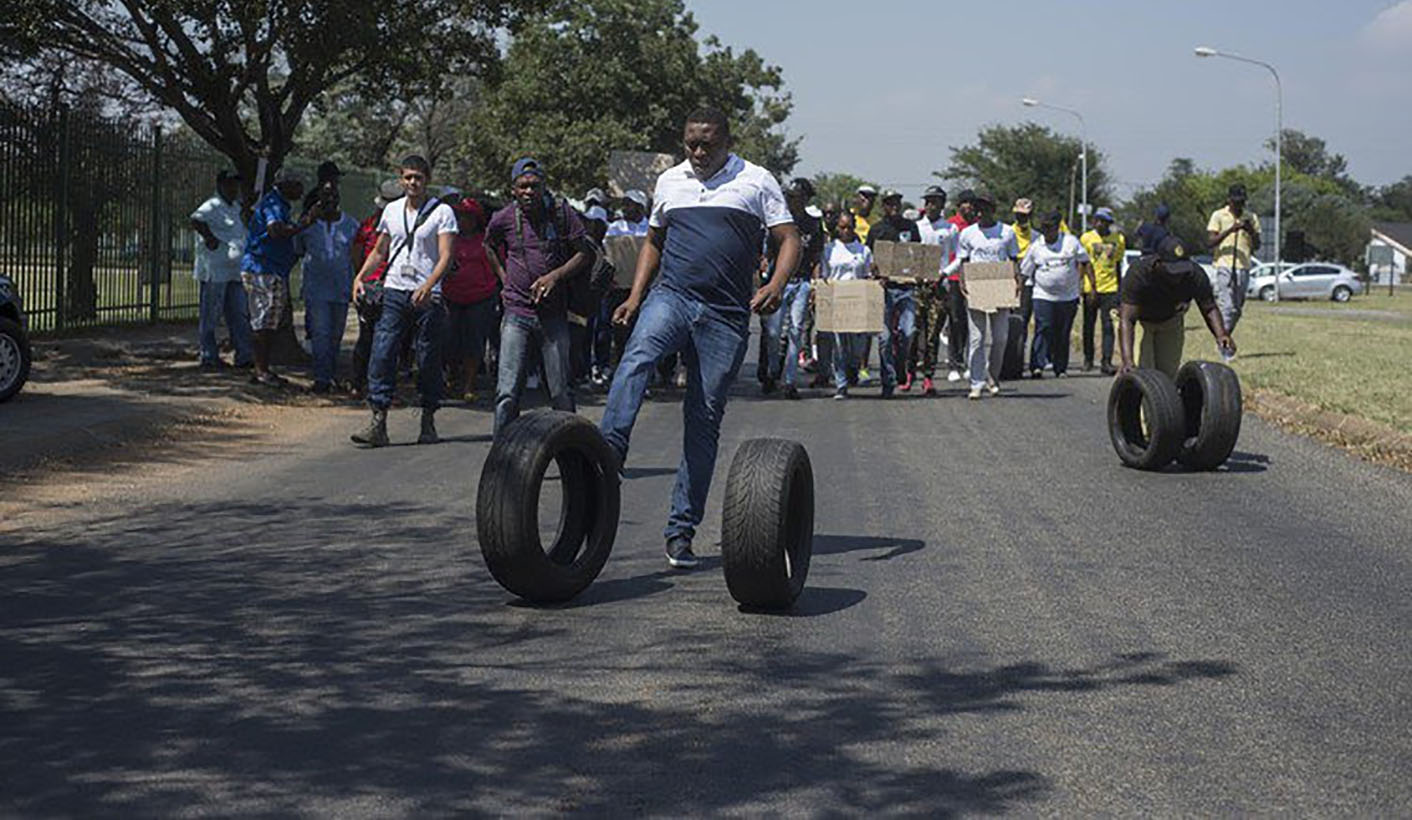 Protests continued for a second day outside Hoërskool Overvaal in Vereeniging on Thursday. Demonstrators persisted with their demand for the school to scrap its Afrikaans-only language policy which they claim is used to exclude black pupils.

Learners arriving for school in the morning had to walk past heavily armed riot police who kept watch outside the main entrance as protesters mobilised down the road. Dozens of parents decided to wait outside the school instead of leaving, saying that they were looking out to ensure that no harm came to the children inside the school.

A parent of a Grade 8 pupil said her son had just started high school and insisted that he attend class on Thursday despite the disruptions outside the gates. “My son was a bit concerned about the violence but he said that he wasn’t afraid to go to school. He wants to learn and we are very happy with the way the school has treated us as parents as they have assured us that security is in place to keep our kids safe,” said the mother.

A grandparent of another pupil said he was unhappy with the way the police handled the situation on Thursday. “Why do they let them toyi-toyi outside the main gate and burn tyres? Why don’t the police block the guys from coming into this street? The police are useless,” said the man.

Down the road from the main entrance taxis started arriving carrying more protesters, many of whom were wearing COSAS T-shirts. They began marching towards the other end of the road where many of the parents had gathered. Separated by police tape, the opposing groups began hurling insults at one another and had to be separated by riot police as the situation became increasingly tense. From inside the school teachers and staff could be seen filming the altercations with their smart devices. Some learners looked on from the balconies.

Photo: Parents outside the school were involved in altercations with some protesters.

Some protesters attempted to set tyres on fire but they were stopped by protest leaders who said that they did not want a repeat of Thursday’s violence. Others moved to barricade the main road running next to the school. An incident occurred in which a local resident was almost stoned by the mob as he attempted to remove the barricade so that his car could pass. Police were quick to respond to all flare-ups and moved to calm the situation.

Later in the day, after the learners had been picked up by their parents, a police vehicle was hit by a petrol bomb. A riot policeman extinguished the fire as his colleagues began making mass arrests. Most of the protesters were made to lay on the ground and then ushered into the back of a nyala and another police van. About 30 people were arrested and taken away by the police.

Photo: Protesters blocked a main road leading up to the school with debris and burning tyres.

“I’m not sure why they arrested all those boys. We just saw people running and so we also started running. They pointed their guns at us and said that we should lay on the ground and they took all the young boys and put them in the police cars,” said a protester who identified herself as Pinky.

Shaka Radebe, a local ANC leader, said that most of the protesters who were arrested on Thursday had been released on bail. He also said that some of the parents want to meet with an ANC delegation to discuss the way forward. “We want to meet and discuss if we can meet each other half way. If there is common ground we can proceed to meet with school management,” said Radebe.

Photo: A police officer removes a burning tyre blocking a main road leading to the school.

Gauteng Education MEC Panyaza Lesufi said the issues must be resolved as a matter of urgency as no child should go to school in fear of rubber bullets and tear gas.

A member of the School Governing Board said he was instructed not to speak to the media. DM

Photo: Some protesters arrived with tyres as the demonstration outside Hoërskool Overvaal in Vereeniging continued for a second day.