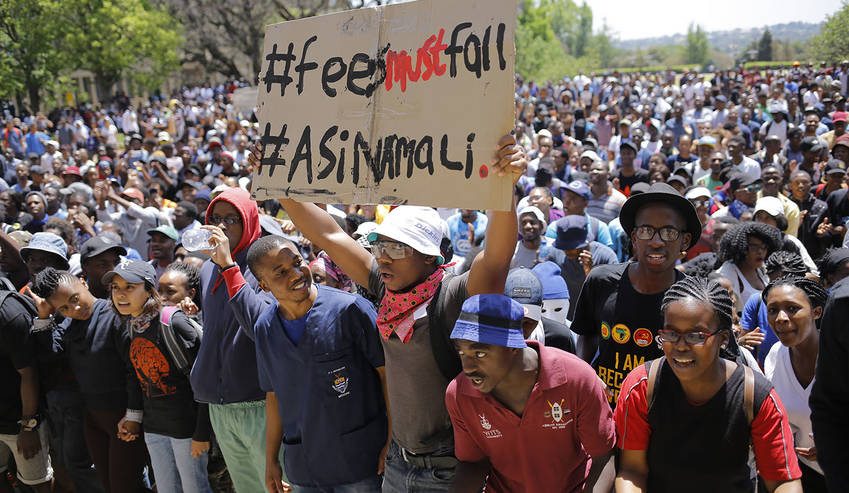 Weeks later, reports emerged revealing certain conditions that would have to be met by the students receiving funding.

These include 80 hours of community service a year. The community service involves lending assistance to young children at early-childhood development centres, assisting in environmental clean-ups, visits to old age homes to spend time with the elderly, assisting nursing staff in hospitals and clinics, and volunteer work in libraries or in community watch programmes.

The students would also not be able to leave the country immediately after graduation. If they do, they would be expected to repay their money the state spent on their education.

Students responding to the conditions, told Daily Maverick that it was uncalled for that the department was expecting them to “play sweet” in return for funding.

“The conditions set by the department of higher education are absurd because they do not respond to our social conditions as a country, especially black society as we have called for free education for all,” Vaal University of Technology (VUT) SCR president, Lebogang Medupe said.

Last week chaos erupted at some of the country’s institutions of higher learning after many students turned up to apply for study and to register for courses. Several prospective students were hurt during a stampede in some tertiary institutions.

Students said they do not welcome the conditions set by the department as the department had failed to address a host of other issues, including clarity on the plight of senior and returning students, especially those who did not qualify for NSFAS funding and those with historical debts.

“The department’s decision does not promote a spirit of giving back. The department wants us to play sweet, and that is uncalled for. There is no giving back here,” VUT’s Medupe added.

Asked what sort of conditions would be acceptable to students, Medupe said: “The only acceptable conditions are those which are ‘academically worthy’.”

While many students are opposed to the idea of the conditions, the department of higher education noted that it was important to attach the conditions to encourage a sense of responsibility.

The department’s Spokesperson Madikwe Mabotha said free education everywhere is not as free as everybody might think. Mabotha pointed out that the conditions were only reasonable considering that all beneficiaries would be exempted from paying back the taxpayers’ money used on their fees.

“The conditions were attached to encourage a sense of volunteering and responsibility. We will not place a financial burden on students. The conditions are a way of saying how do we make up for the taxpayers’ money,” Mabotha said.

The lengthy battle for free higher education has not quite delivered what many students were looking for, with much criticism levelled at the lack of a clearly defined funding model. Many South Africans and concerned students are now looking to the Budget speech in February for clarity on how the free higher education will be funded.

Student representation at the University of Pretoria had a mixed reaction to the conditions attached to free higher education. The university’s SRC president Kwena Moloto hailed the department’s idea as noble, but expressed concern for poor students saying that the 80 hours of community service would put such students at a disadvantage. Moloto, however, would not elaborate on how poor students would be placed at a disadvantage.

“The 80 hours of community service is what the University of Pretoria rejects,” Moloto said.

The University of Johannesburg’s Auckland Park SRC chairperson Nhlanhla Mbongwa said there should be no conditions set for free education. Mbongwa said it would be hard for them as students to afford the hours to dedicate to community service because of the robust tertiary schedule. “Where will we get the time to do the community service?” asked Mbongwa.

Mbongwa said students would rather be placed in schools where they could be able to assist with work that was related to their respective courses.

The EFF, who have been at the forefront of the call for walk-in tertiary applications said the only acceptable condition to having access to free education should be academic ability. The president of the EFF Student Command, Peter Ketse said compelling students to do community or volunteer work in order to access free education could do more damage than good given the low throughput in South Africa’s education system.

“Most South African students spend their time ‘surviving’ and (are) overwhelmed by academic work, part-time jobs, and family obligations. The conditions attached to higher education by the department are artificial, and not well thought through,” Ketse said.

He said there were plenty of activities that could benefit students other than the set conditions.

“The essence of volunteering is that it is voluntary rather than contractual. This has the great potential to negatively influence students’ motivation of volunteering in the future. If students are compelled to volunteer a certain number of hours, they become resentful, complete their hours and never volunteer again,” Ketse said.

He continued: “If the issue is about making sure people who benefit from taxpayers’ money give back to the country, this should have started with the biggest benefactors of taxpayers’ money (government employees), and would also apply to free basic education, health care, housing and social grants. Community service or volunteering should not be compulsory.” DM

File Photo: Students from Wits University demonstrate on campus during a fourth week of clashes with police forces during protests against the cost of higher education in Johannesburg, 10 October 2016. EPA/KIM LUDBROOK