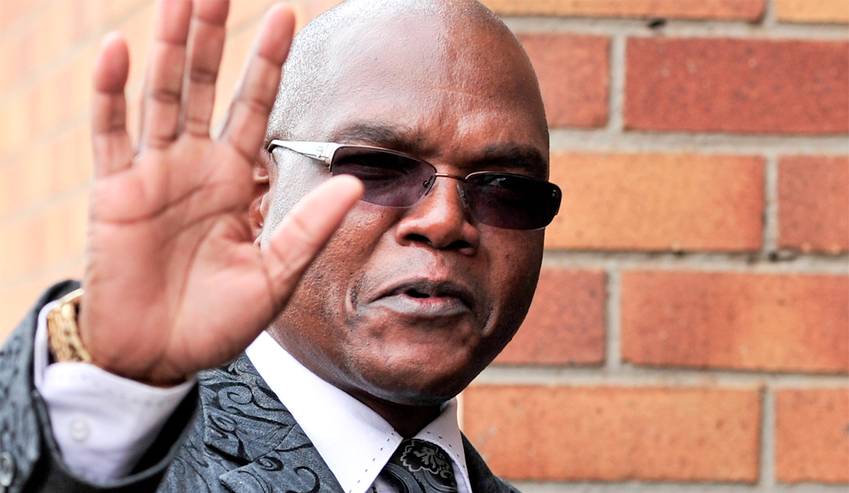 After seven years on suspension, Richard Mdluli has finally been removed as head of SAPS crime intelligence. Minister of “fearfokol” Fikile Mbalula made the announcement on Wednesday, claiming a revolution is under way within the police service. By ORATENG LEPODISE and GREG NICOLSON.

Speaking in Pretoria, Police Minister Fikile Mbalula announced on Wednesday that an agreement had been reached for Lieutenant-General Richard Mdluli, the suspended head of crime intelligence, to be relieved from his duties immediately, with full benefits. Mdluli was suspended in 2011 with full pay.

“This will enable us to move to the next chapter and instil stability and vision at crime intelligence,” said Mbalula. According to the minister, SAPS had reached a mutual agreement with Mdluli for him to take early retirement, immediately ending his contract and allowing him to receive full retirement benefits.

“We’re not going to continue to pay senior officers while they’re sitting at home. We want all those who are in service and are being paid a salary to do the work,” said Sitole.

Mdluli was placed on paid suspension in 2011 in the wake of charges related to intimidation, kidnapping, assault with intent to do grievous bodily harm, and murder. He has been portrayed as being President Jacob Zuma’s lapdog after he reportedly aligned himself with the president.

Crime intelligence has had 12 acting heads fill his post and Mbalula said he had made it his short-term goal to fix the problem as part of his turnaround plan. Mdluli has earned around R8.3-million during his lengthy suspension, but both Mbalula and Sitole said it was necessary to accept his early retirement, and the benefits that go with it, in order for SAPS to focus on its job.

“We are dealing with serious levels of violent crimes, organised crimes, corruption in the public and private sector, again with the private sector being the main protagonist in public sector corruption,” said the police minister.

“Our people are under siege from violent crimes; greedy public and private sector officials. We must release the state power onto them,” Mbalula continued.

Mdluli became a cop in 1979 and was a member of the Special Branch in the apartheid era. The unit was responsible for violently clamping down on anti-apartheid activists. He commanded the Vosloorus police station’s detective branch in Boksburg and served as the deputy head of the Gauteng police before he was appointed to lead crime intelligence in 2009.

“Part of the turnaround plan in our crime fighting strategy is to have intelligence-led policing, to disturb, disrupt and erupt on crime. We could not achieve this without stability at the crime intelligence division,” said Mbalula. “We have no time to waste time,” he repeated.

SAPS will now field candidates to fill Mdluli’s position. Mbalula has also started the process of appointing a new Hawks head under the guidance of the SAPS Act. Former Hawks boss Berning Ntlemeza’s appeal to keep his job was recently rejected by the Constitutional Court. An independent panel will be appointed to advise Mbalula and to interview and make a short list of candidates.

According to Mbalula, the police are looking for a Hawks head who can respond to the demands of modern-era policing. “The head of DPCI [Directorate for Priority Crime Investigation] needs to be alive to the complexities of the 21st century criminality, which includes: cybercrime, terrorism, human trafficking, drug trafficking, financial crimes and the escalating cash-in-transit crimes,” Mbalula said.

Mbalula said an investigation against former acting police commissioner Kgomotso Phahlane is under way. Phahlane is being investigated by the Independent Police Investigative Directorate (IPID) on fraud and corruptions charges. He said corrupt cops would face the might of the law.

“Police don’t function by way of camera. It is an untelevised revolution that is coming,” said Mbalula. “Action is being undertaken but we have to be sensitive to the man on the street who says high-profile cases are not being handled.”

Despite slow progress on allegations of State Capture, the National Prosecuting Authority (NPA) has moved to isolate assets in regards to Trillian and McKinsey’s deal with Eskom and has said more court orders are on their way.

The police minister also intends to reduce head office costs at SAPS as part of reforming the police. The process will see top cops moved to policing regions to bring them closer to operational activities. “Regionalisation I believe will respond better than provincialised structures,” said the minister.

“Regionalisation is one of the most important changes in police resources deployment in over a decade in our country. In essence we are revolutionising the way police work. We are changing the way we understand crime and the way we respond to it.” According to Mbalula, this means major-generals and lieutenant-generals will now operate from police stations in crime hotspots, rather than work in head office.

“We are starting with Gauteng province, it will have regional police commissioners with a downward-focused migration of resources as we disturb, disrupt and erupt on crime in a systematic way,” Mbalula explained.

The new strategy, he said, means cops will respond more effectively and efficiently than the current provincial structures dominating SAPS deployments. Provincial structures will still exist, as per constitutional requirement, but responsive regional commanders with adequate resources will now be assisting them in their work.

Mbalula dodged questions on Wednesday on police officers who have a criminal record. A crime intelligence officer was arrested on Tuesday for defrauding a police slush fund. He was on parole at the time and legally should not have been allowed to work for the SAPS. Mbalula said he couldn’t comment on the issue as he was still waiting for a briefing from Independent Police Investigative Directorate boss, Robert McBride.