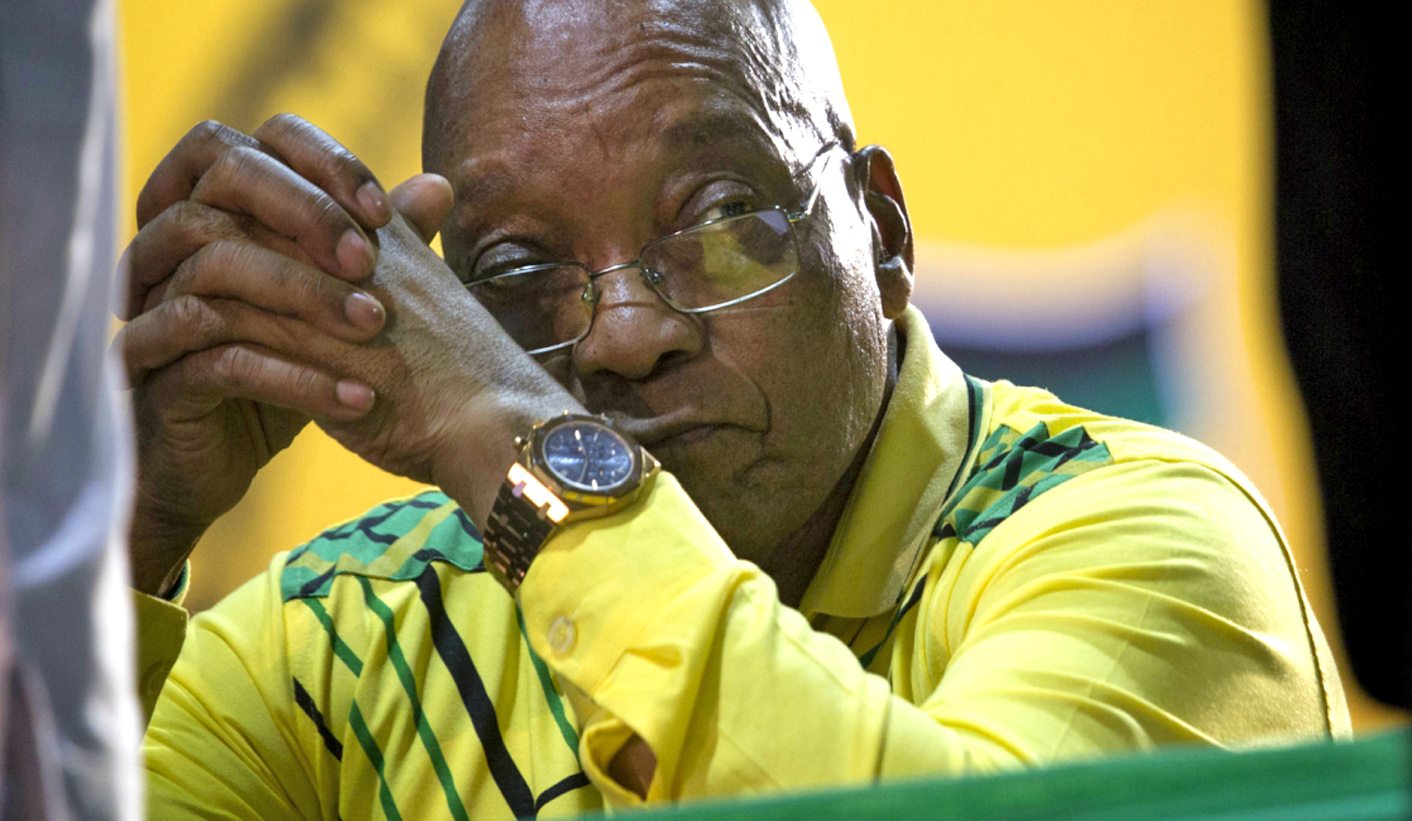 The ANC kicked off the week by celebrating its 106th birthday, but it could be a different organisation by the time its birthday rally comes around on Saturday. The ground is shifting to favour the party’s new leadership, and President Jacob Zuma’s late-night announcement on Tuesday that he’ll be appointing a state capture probe is one sign of that. Then there is also news that two African presidents will, unusually, grace the former liberation movement’s weekend celebrations. By CARIEN DU PLESSIS.

President Jacob Zuma’s sometimes baffling grip on power isn’t due to his chess skills or even his ability to see into the future. He takes extraordinary risks, and he’s very lucky, an official close to him said in a private conversation on the sidelines of the ANC’s conference last month. But even before the outcome of the leadership vote was known, the same official said Zuma was set to be out of the country’s Presidency within the next year, no matter who won.

Zuma’s boldness was apparent in another late night bombshell statement on Tuesday, when he announced he had decided to appoint a commission of inquiry into state capture, headed by Deputy Chief Justice Raymond Zondo, as recommended by former public protector Thuli Madonsela in 2016, and as ordered by the North Gauteng High Court last month.

This, after Zuma resisted for at least two years. Madonsela herself told Radio 702 soon after the announcement that she was “encouraged by the decision” and that it was “better late than never”.

Zuma, humbling himself in a statement addressed to “fellow South Africans”, said:

“The allegations that the state has been wrestled out of the hands of its real owners, the people of South Africa, is of paramount importance and are therefore deserving of finality and certainty.”

Whereas only six months ago his supporters at the ANC’s policy conference fought against the use of the term “state capture”, referring specifically to the alleged corrupt dealings between Zuma and his friends in business, the Gupta family, Zuma in the statement said the issue “is of such serious public concern that any further delay will make the public doubt government’s determination to dismantle all forms of corruption, and entrench the public perception that the state has been captured by private interests for nefarious and self-enrichment purposes.”

This sounds a bit unlike Zuma, but it’s not the first time that he’s executed surprising manoeuvres in this case. In October he abandoned the part of his notice of motion, asking that the report be sent back to the Public Protector for further investigation in order to make findings of fact. The judgement in this case came shortly before the ANC’s conference last month, and Zuma indicated he would appeal the cost order as well as the order regarding the duties of the president to appoint commissions of inquiry in terms of Section 84 of the Constitution.

The conference subsequently went on to resolve that the judicial commission of inquiry should be appointed in line with the remedial action given by Madonsela in her State of Capture report. Zuma’s announcement is an apparent attempt to comply and neutralise this as possible ammunition to be used against him.

Either way, the devil could be in the terms of reference, as Zuma hinted that the inquiry could be broader than just around his dealings with the Gupta family:

“There should be no area of corruption and culprit that should be spared the extent of this commission of inquiry.”

If the terms are too broad and include, say, corruption under previous government administrations, it could slow the commission down so much as to be ineffective.

The timing of Zuma’s announcement is, however, everything. It comes just before the first meeting of the ANC’s national executive committee (NEC) elected at last month’s conference. It’s set to happen at the East London Convention Centre on Wednesday.

It’s generally expected that the issue of Zuma stepping down would be touched on at the meeting, but the general feeling is that this now might take the thunder out of newly-elected ANC president Cyril Ramaphosa’s first birthday rally address.

There will be another point of pressure, a few hundred kilometres down the coast in Cape Town, where MPs are at the same time expected to meet to consider draft rules that will deal with the removal of a sitting president.

This comes after a ruling on December 29 by the Constitutional Court said the National Assembly must “without delay” put in place rules governing the impeachment of the president in terms of Section 89 of the Constitution and initiate action against Zuma.

This impeachment is likely to be a last resort, should a likely recall from the ANC’s side fail (legally, the ANC has no actual power to force Zuma to step down).

So, is Zuma pulling some fast manoeuvres and fighting for his life, or is he throwing in the towel and hoping for the best? Even the best of luck is bound to run out at some point.

Already this week the ground under the ANC’s feet has been rumbling as the tectonic plates of power in the party are shifting. The bellwether for this has been Police Minister Fikile Mbalula, who didn’t defend Zuma as he has in the past few years, but instead said it was up to the NEC to decide whether he should go. There seems to be a reasonable consensus that support for Zuma in the NEC has dropped to below 50% and that leaders would eventually be able to take such a resolution if it came before them.

Then there’s the matter of the African dignitaries expected at the birthday rally. Kenyan president Uhuru Kenyatta is set to attend, according to an official in the know, and his visit to Zuma in Durban was a mere protocol visit.

It was Zuma and Kenyatta who rebuilt dormant ties between South Africa and Kenya, but it’s likely that Kenyatta was now looking beyond, to retain ties with South Africa. Ramaphosa has previously been considered close to Kenyan opposition leader Raila Odinga.

Zimbabwe’s new president, Emmerson Mnangagwa, who paid a visit to Zuma soon after the ANC conference last month, is also expected at the rally, and so is Tanzania’s former president Jakaya Kikwete.

It’s very possible that Zuma will survive this week and go on to attend his last African Union summit at the end of the month, although it is said the presidency hasn’t confirmed his travels there yet.

As for Zuma’s presence at the State of the Nation Address, the jury’s out. Keeping Zuma on until then could provide an opportunity to let him exit with dignity, but some of his friends in the party are concerned about the usual heckling and abuse by the Economic Freedom Fighters that he would be subjected to. This time around, he’d be there completely politically naked and exposed. Still being at the helm to deliver that speech would hardly count as a victory lap. DM