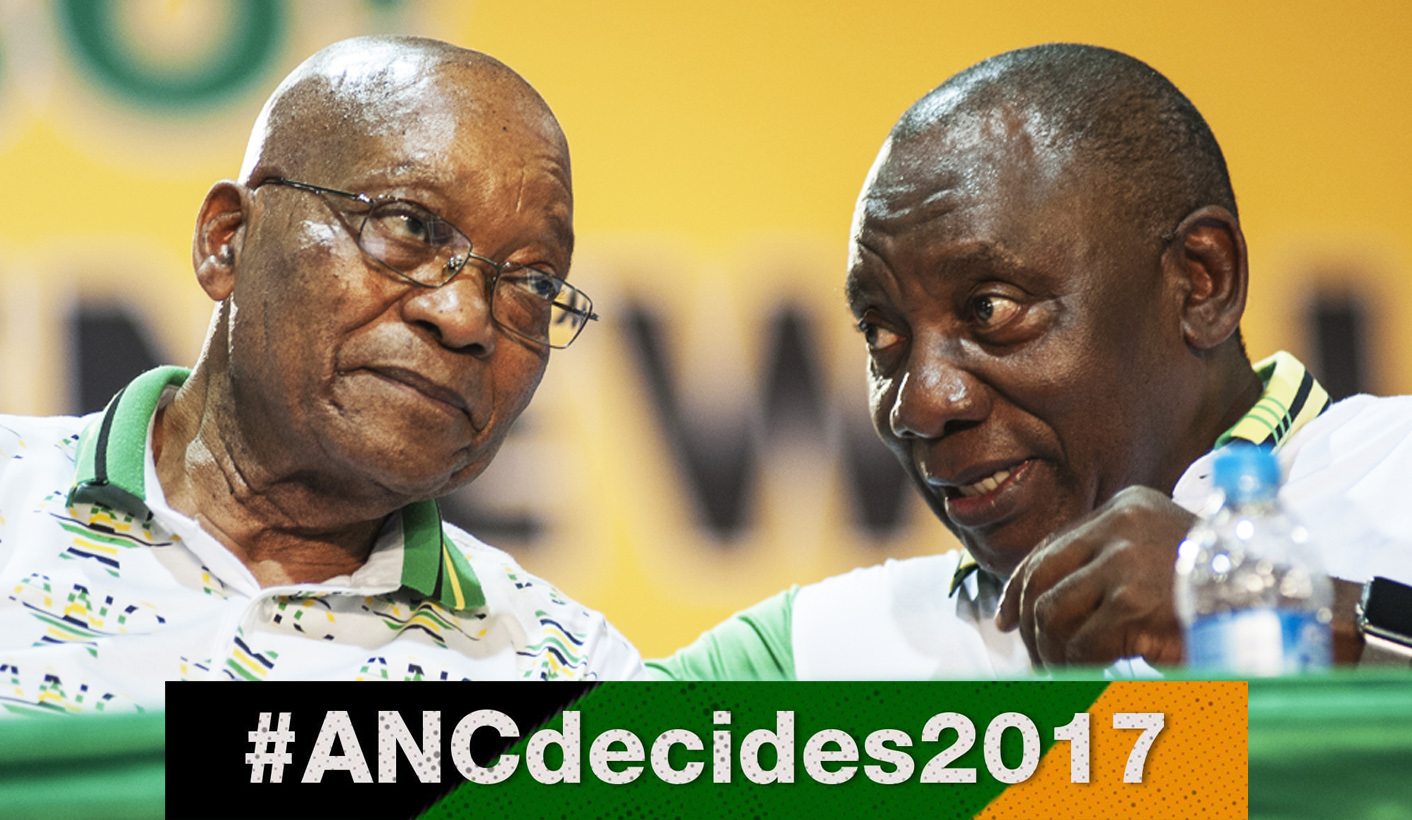 The ANC’s 54th policy conference at Nasrec is over. It’s been a long five-and-a-bit days: high on drama, delays and uncertainty but fairly low on political substance. As exhausted delegates and journalists wend their way home, it’s time to take a look at the moments we’ll remember. By REBECCA DAVIS & GREG NICOLSON.

The most worried man at Nasrec

A now-viral video captured the moment when outgoing ANC president Jacob Zuma heard the name of his successor officially announced as winner. Zuma would have been informed beforehand, but that didn’t stop his poker face slipping as team CR17 went wild. Moistening his lips and opening and clenching his fists, Zuma did not applaud. Number One surveyed the scene around him, slowly blinking, as if taking the temperature of the reception of the announcement.

The composition of the remainder of the Top Six would have given him room to breathe a little easier, but at the moment of the big reveal Zuma looked like a man in need of an asthma pump. Were visions of a courtroom swimming before his eyes?

King Cyril on the throne of thorns

The ANC’s wealthy crown prince Cyril Ramaphosa was finally elected party president, a position he chased 20 years earlier. But it came with a catch. His campaign centred on clean governance and economic stability, but three of the ANC Top Six elected this week are poster politicians for corruption.

The leadership is a Liquorice Allsorts bag of interests and ideologies that will limit Ramaphosa’s ability to save the ANC from itself before the 2019 general elections. Newly elected Secretary-General Ace Magashule and Deputy Secretary-General Jessie Duarte both campaigned for Nkosazana Dlamini Zuma and are implicated in allegations against the Guptas. Deputy President David “DD” Mabuza is aligned only to himself. Ramaphosa may hold the reins, but the horses could bolt at any time.

The Ace up NDZ’s sleeve

Any political analyst who tells you they fully expected Ace Magashule to win the conference vote for the secretary-general position of the ANC is lying. Magashule’s victory was hands down the most shocking result of the leadership election – and Dlamini Zuma could barely restrain her joy at the announcement.

Magashule will go into his role with a massive target on his back for investigative journalists, with the Free State Premier’s cosy relationship with the Guptas already exposed. He is accused of running the Free State effectively as his personal fiefdom. The province’s ANC executive has collapsed under his watch. Now Magashule has been handed the keys to Luthuli House. His election should come with a rolling Xanax prescription for Ramaphosa.

One woman, much cry

The most ludicrous sideshow of the Nasrec conference was the spectacle of ANC Women’s League President Bathabile Dlamini berating delegates for not voting for deputy president candidate Lindiwe Sisulu – even though the Women’s League didn’t, either. In fact, the Women’s League actively sought to delegitimise Sisulu’s campaign in the run-up to the conference. Yet with the votes counted, Dlamini blamed “patriarchy” for the outcome.

The fact that just one woman made it to the ANC’s Top Six is a legitimate concern, in conflict with the party’s policies on gender policy. (The fact that the woman in question is Jessie Duarte is hardly cause for celebration either – even ANC delegates at the results announcement couldn’t bring themselves to demonstrate much enthusiasm over that.) But if patriarchy’s the problem, the Women’s League sure as hell ain’t the solution.

Media draws a line in the sand

Journalists usually suck at staging protests. The moment members of the media assert themselves, others start filming rather than joining them. The ANC conference saw a rare moment of solidarity. Throughout the event, the media was treated by security like Carl Niehaus at a Corruption Watch braai. They took a stand during Ramaphosa’s first publicity event as ANC president.

Bloomberg’s Sam Mkokeli was manhandled out of the conference on Tuesday and had his accreditation withdrawn after journalists complained about the lengthy wait for Ramaphosa. Others staged a walk-out in solidarity. Journalists subsequently delivered a laundry list of grievances from the four days at Nasrec and forced the ANC to listen. The party apologised and promised it would try to improve its treatment of journalists – a pledge repeated by Ramaphosa in his maiden address. The moment could unify the media and send a message to the powers that be that truth and transparency must be respected. We can always dream.

Land ahoy! (But probably not.)

For a while, it genuinely seemed like the conference might run out of time to discuss any policy matters whatsoever. Day Four dawned without a single issue yet being broached. When committees finally kicked into gear behind closed doors, the first batch of report-back press briefings delivered almost nothing of interest or substance. And then – a flurry of fever-dream action. The nationalising of the Reserve Bank. An amendment to the Constitution to allow the expropriation of land without compensation. A decision to downgrade the South African embassy in Israel.

Many analysts suggested that this was evidence that although Cyril Ramaphosa may have won the presidency, the policies to be implemented would be firmly NDZ’s. On closer inspection, though, the announcements on land and the Reserve Bank were about as solid as a Free State PEC: no firm time frames, no detail on implementation, and no acknowledgement that – in the case of the land issue – the existing legal framework already allows the government to expropriate land. As such, anyone eyeing out a nice plot to grab – or frantically sticking their house on Property24 – should probably hold off for the foreseeable future.

Cyril Ramaphosa’s maiden address as ANC president early on Thursday morning barely papered over the cracks made evident by the conference. But he’s a slick operator. In his address on Saturday, Zuma played the victim and attacked almost every sector of society, but Ramaphosa was out to build bridges. Those hoping for a quick recall of Zuma would have found no trace of it in Ramaphosa’s tribute to his predecessor – in which we learnt that Zuma is not just hilarious but also a veritable Willy Wonka, dispensing sweeties to all around him.

The new party president deftly balanced policies that split the ANC and the country, like endorsing land expropriation without compensation while emphasising that it will only be done responsibly. He smiled through his teeth and thanked Zuma as he said party members acting out of self-interest would be held accountable. Ramaphosa told everyone what they wanted to hear, but he did it oh so elegantly.

It took till past 3am on Thursday for the Elexions agency to announce the NEC, with the delay not properly explained. Comparing the final 80 NEC members to the two slates of 80 candidates produced by the CR17 and NDZ camps, it’s clear that the result was virtually a draw. Ramaphosa’s team won at most two or three more cadres than Dlamini Zuma’s. King Solomon himself would have struggled to compose an NEC more equal – or more divided, depending on your view.

The NEC is the ANC’s most critical decision-making body. If it is ideologically split down the middle in the way the results suggest, it’s hard to see how they will reach a consensus on the most contentious issues that come their way. The most obvious of these is the recall of Jacob Zuma. Good luck to them. It’s an old joke that at ANC conferences, decisions are made by a process of “consensus by exhaustion”. Perhaps the same will apply to this hybrid NEC. DM