#ANCdecides2017: The Top Six that could have been 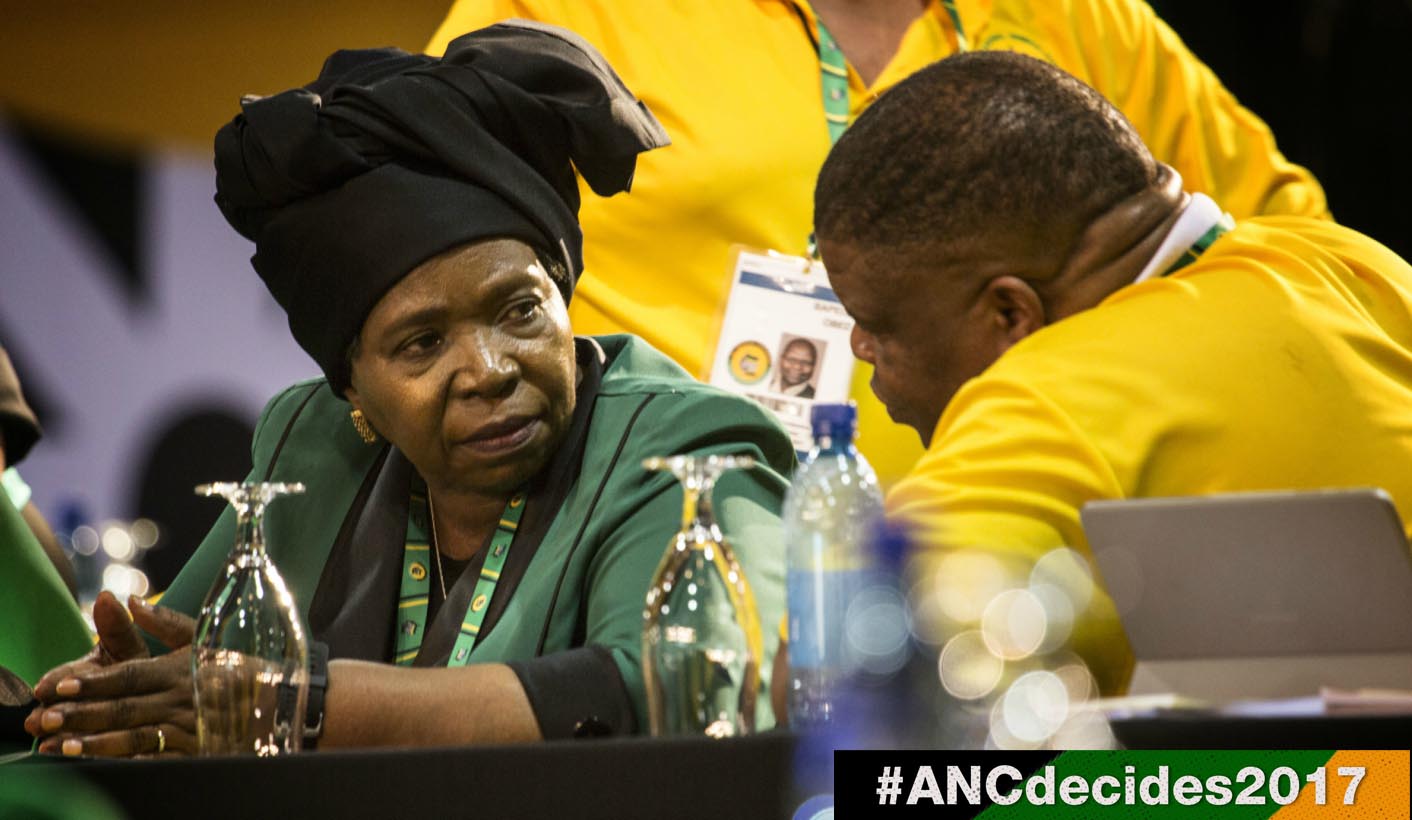 It was always a tight race and there were always going to be losers. Here are the leaders that delegates to the ANC's 54th National Conference rejected. By GREG NICOLSON.

Nkosazana Dlamini Zuma’s campaign has largely been defined by who she chooses to spend time with. The former minister of health, foreign affairs, and home affairs has been backed by President Jacob Zuma’s allies in the Free State, North West, KwaZulu-Natal and Mpumalanga, as well as the ANC Youth League and Women’s League.

Many of the characters involved in her campaign have either been linked to or have defended the Gupta family and Zuma against State Capture allegations.

The medical doctor has an impressive CV. In the 1970s she got involved with the ANC’s underground structures, served as vice president of the South African Students’ Organisation and went into exile in the United Kingdom in 1976. She served as African Union Commission chairperson from 2012 to 2017 before returning to become a Member of Parliament.

In government, she has been hailed as a tough and sometimes curt operator. As health minister, she broadened anti-tobacco regulations and promoted women’s rights regarding reproductive health and basic care. She was minister, however, when R13-million was wasted on the theatre production, Sarafina II.

She took on foreign diplomats as minister of foreign affairs and was associated with former president Thabo Mbeki’s African Renaissance vision, but she failed to impress during her five years at the AU.

Dlamini Zuma has spoken at countless ANCWL events but has struggled to define her campaign. She has focused on skills development and economic transformation – her supporters are the self-appointed “radicals” – but she hasn’t based her campaign on fighting corruption, as has her opponent.

Many of her supporters point to the need for the ANC and country to finally appoint a female leader.

The Human Settlements Minister’s chances of being elected president never looked strong but she continued to push her “It’s A Must!” campaign until the eve of the ANC conference. During his campaign, Ramaphosa had unexpectedly announced that he wanted Science and Technology Minister Naledi Pandor to be elected deputy president, choosing a female candidate to counter the calls for a woman to be elected into the top job.

Sisulu can be scathing of her opponents and shot down suggestions that she was running on her family name. She is the daughter of ANC icons Walter and Albertina Sisulu and specialised in intelligence when she joined Umkhonto weSizwe in the 1970s. She has been a Member of Parliament since 1994 and has held multiple ministerial posts – intelligence, housing, defence, and public service and administration.

Her presidential candidacy offered a third option between Dlamini Zuma and Ramaphosa, but she lacked a significant support base to become the “unity” candidate. Throughout her campaign, she dismissed the idea of teaming up with Ramaphosa but – after she said he must “go down on one knee” – the pair released a joint statement last week saying they “agreed to work together”.

“We’re going to the conference in December to reclaim our country,” Senzo Mchunu said in September. The ANC’s potential administrative head campaigned for Ramaphosa and provided important support in KwaZulu-Natal, the ANC’s largest province, where the provincial leadership backed Nkosazana Dlamini Zuma.

Mchunu was elected KZN ANC chairperson and premier in 2013 after Zweli Mkhize was elected ANC treasurer general and was deployed to Luthuli House. The former KZN education MEC was perceived to have been sympathetic to the “Anyone But Zuma” campaign that tried to oust Zuma in 2012.

Zuma’s camp took firm control of the province when Sihle Zikalala beat Mchunu to become chairperson in 2015 in an election that split the party in KwaZulu-Natal. Mchunu was forced to resign as premier in 2015, but the 2015 conference was nullified recently by the courts and Zikalala’s appointment was ruled illegal. Mchunu still commanded significant support in KZN and helped split votes from the province.

In September, Mchunu testified at the Moerane Commission on political killings in KZN and said they were related to the fierce contestation between those candidates for ANC councillors and different factions. “We need that stability and unity back. This is only achievable if we sober up,” he recently said of the ANC in KZN. The same could apply for the country.

Before moving into full-time politics and rising through the ANC ranks, Mchunu was a teacher in the 1980s. His first name is actually Edward.

In line with the tradition of ANC deputy presidents taking the top job, in 2015 Cosatu first raised the idea of supporting Ramaphosa. The ANC’s Youth and Women’s Leagues had already announced their intention to back Dlamini Zuma and Cosatu proved a key ally for Ramaphosa’s campaign.

The labour federation’s support has been rewarded with the appointment of Losi, its second deputy president. Losi doesn’t have the public profile of Cosatu president Sdumo Dlamini or general secretary Bheki Ntshalintshali, but since she was elected in 2009 Losi has been part of some of Cosatu’s key decisions in its darkest days, such as expelling former general secretary Zwelinzima Vavi and her own union, Numsa.

Numsa and Vavi argued that the former soldier and Ford employee should not have been re-elected in 2015 as she was no longer a Numsa member. Losi however joined policing union Popcru after taking a position with SAPS.

Cosatu and the SACP have felt sidelined by both President Zuma and President Thabo Mbeki before him and Losi could help repair their fractured alliance with the ANC. “The most important thing is to have more workers in the NEC of the ANC, in order to have the kind of shift which we need in favour of workers in the country,” she said recently.

Her profile on Cosatu’s website says she likes to draw.

Mthethwa goes head-to-head with incumbent Gwede Mantashe for the important role of ANC Chair. The 50-year old Minister has maintained a low profile since being banished to the exile of the Arts & Culture portfolio in 2014 after a stint as Police Minister during the Marikana Massacre.

During his time in the Arts & Culture department Mthethwa has interpreted his role to focus almost exclusively on “heritage”, embracing harebrained schemes like the provision of a flag to every South African school and mooting a potential change of name for the country.

As Police Minister his record was arguably abysmal, even leaving aside the shameful spectre of Marikana. Mthethwa presided over increasingly heavy-handed policing, culminating in a number of protester deaths and a rise in police brutality. At the same time, incidents of serious crime increased under his watch.

Mthethwa proved his chops as a Zuma loyalist through his tireless defence of the president during the Nkandla saga. Some have claimed that his relationship to Zuma has deeper roots: an absurd rumour popular on Twitter at one stage had it that Mthethwa was Zuma’s secret son. (He’s not.)

Before making it to the heady heights of the Cabinet, Mthethwa was the ANC’s Chief Whip in the National Assembly, where one of his duties was informing Parliament that the ANC had decided to recall Thabo Mbeki. He was rewarded with a ministerial post shortly after.

Global issues receive scant attention in the South African media and International Relations and Co-operation Minister Maite Nkoana Mashabane has been known for two things in recent years. Earlier in 2017 she granted former Zimbabwean first lady Grace Mugabe diplomatic immunity after she was accused of assaulting a model in a Sandton hotel. The minister said while the decision pained her she was just following the law.

Then there were the comments about the hole in her head. Last year, Nkoana-Mashabane cryptically told news network Al Jazeera she had a hole in her head from carrying water as a child. She failed to answer tough questions on crises in South Africa, but praised President Zuma for his efforts in the liberation struggle and his patience.

Nkoana-Mashabane is the treasurer of the ANC Women’s League, which under its leader Bathabile Dlamini has orchestrated Dlamini Zuma’s campaign. She was an active member of the Mass Democratic Movement and ANC underground in the 1980s and after a brief stint in Parliament in 1994 and 1995 led diplomatic missions in India, Malaysia and the Maldives.

She campaigned for Dlamini Zuma to be elected African Union Commission chairperson in 2012. DM