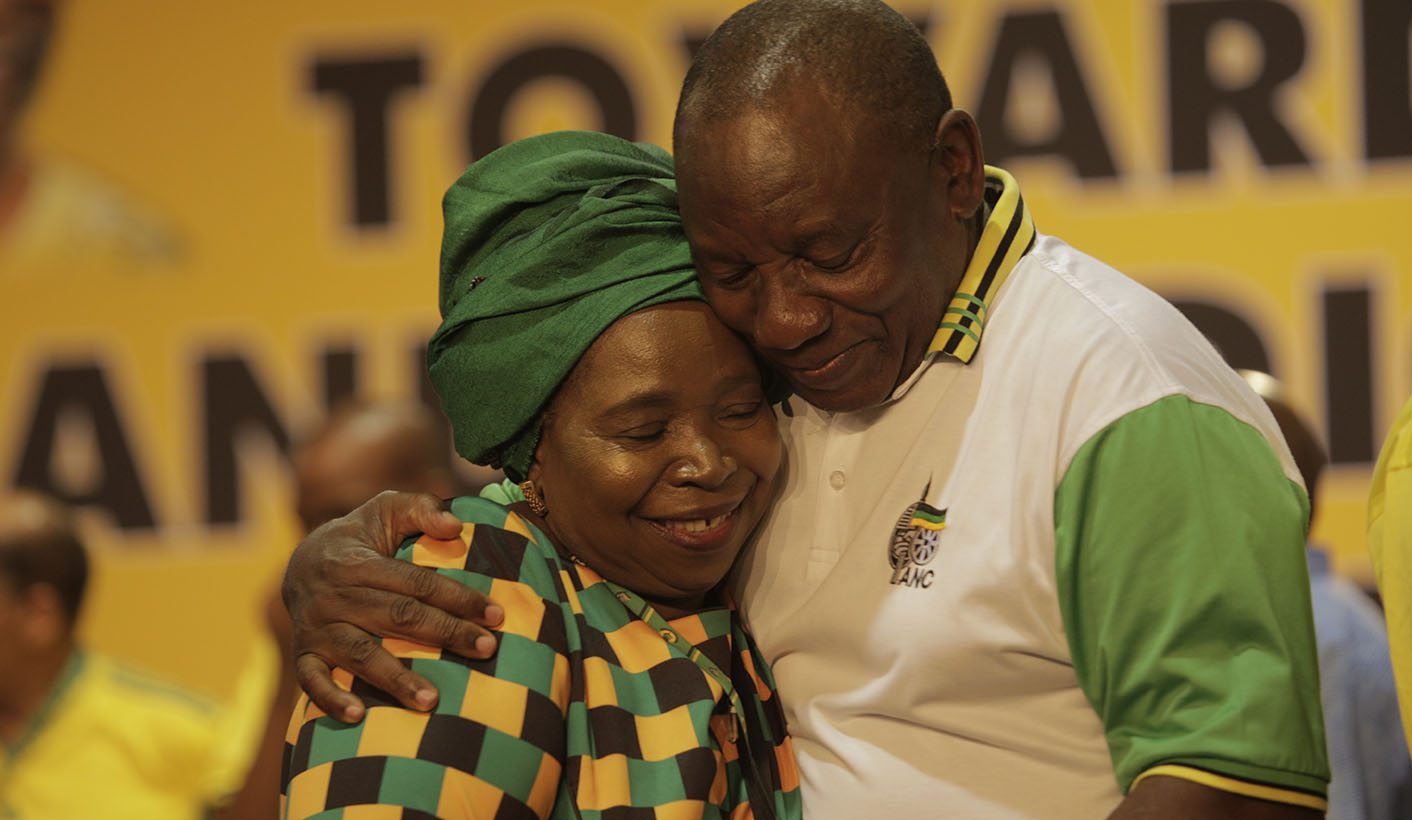 01:39. Yes, really. Not by choice, I promise. I tried to sleep. Really, everything, a glass of sedation, counting delegates jumping over hoops to get accredited, even happy, cheerful thoughts. Nothing worked. Should I glance at my phone, just to check... no, don’t do it, you’ll never go to sleep again. Eventually, groaning, I reached for it. Stupid stupid stupid. Twitter app press, voting’s been delayed, no voting is going ahead, no it isn’t, oh hold on – WhatsApp says it is. Whining. Yes, them. The hounds. They should have gone to Cape Town with the family. By STEPHEN GROOTES.

Okay, this is it, let’s just get up. I opened the door into the dining room, stumbled, cursed, was meowed at, again. Bloody cat. Eventually it was time to stop moaning and man up. Out the way, Spock. Don’t make me swear in Klingon. Into the shower, fill the thermos, pack the car, and go. Someone was playing some discussion about land on the radio. It took me 10 minutes to realise the people who were landless in this discussion where the Levites and someone lets SAfm play serious crap at that time of night.

Coming off the highway and past the Sasol garage two blocks away from Nasrec, there were blue lights everywhere. Plastic packets, the tumbleweed of our fair land, moved maniacally across the road. It was dark. The cop on duty was happy to see me. Shame. He looked bored and cold. But more bored. Even the cops at the security entrance were bored enough to be seriously polite, laughing over my empty coffee cup and shaking the thermos just to check.

And into the studio and time to check in and prep. “I can’t sleep,” I tweeted. The response was amazing, considering the time of the morning. So many people awake also waiting for the result. The big news overnight was for a tweet by Zizi Kodwa, the new former national spokesperson of the ANC. He said, proudly, that he was voting for Ramaphosa. I’ve known him for years and years, since he was a spokesperson for the ANC Youth League. For a while he was actually the official spokesperson for the leader of the ANC, known at the time as Mr Jacob Zuma. He was a major cog in the Polokwane project – legend has it he was one of those who led the protest against electronic balloting at that conference.

For him to move away from Zuma in this way over the years really is staggering. It says so much about how Zuma can break relationships with people. It also says a lot about Kodwa’s relationship with Fikile Mbalula. Once, they were incredibly close, now, clearly, the gulf between them is bigger than the physical gap between journalists and delegates at this conference.

Soon it was time to go on air, taking calls, plenty of people clearly awake and alive and wanting to chat. A clever producer was able to snag Mondli Gungubele, the ANC MP and former Ekurhuleni mayor. I’ll never forget his inaugural speech as mayor, back in 2011. He was the first ANC office bearer I saw to speak out, strongly, against the killing of gay and lesbian people. A lesbian couple had just been killed long before this issue went properly mainstream in this country. He spent a large chunk of his speech on it, at a time when he could have ignored it and no one would have noticed. I had a chance to tell him I was there that day, he seemed to still remember it vividly.

Time for questions though: would that Parliamentary inquiry into Eskom continue if NDZ won? Gungubele seemed to think it would, although he also wouldn’t speak against a candidate, only for a candidate. It was coded, but fairly clear. Then on to Solly Mapaila, the best leader the SACP refuses to have. Of course, he was still fulminating against Zuma’s Political Report to the ANC, it was an “opportunity missed” etc. Cosatu’s Bheki Ntshalintshali said the same.

It was well clear by now that nothing was going to happen for quite some time. Branch delegates were still voting, and it is not a quick process. Through the morning, not a lot happened.

Then, finally, Gwede Mantashe held his last press conference as secretary-general. It was a light and interesting moment, I was incredibly gratified to find he had actually called on me at the start. Despite the critique offered by an incredible writer who left this site way too soon, I think the ANC was lucky to have him. It would have split without him.

By now the rumours were swirling. No, Cyril is .. oh look, by the way, Mpumalanga has flipped to his side. Frantic calls, doing what journalists do in a crisis (speak to other journalists), produced a more nuanced and complicated picture. Then came hard numbers on Twitter and via WhatsApp that couldn’t possibly be true, but maybe they were.

Somewhere Carl Niehaus was telling people it was “going to be a historic day”. I made sure I kept walking.

The wait was long. And intense. And hot. And frustrating. And entirely expected. You don’t want people to get anything wrong in a situation like this, so best they check. I have to admit, I had a knot in my stomach. An intense, hard, painful knot. The most painful knot I’ve had on any news story ever. This matters, it is the culmination of a massive two-year battle between different classes, between different constituencies in the ANC. I was on the wireless, first with Bongani, then with Bruce. Talking, chatting, speculating. It was fun, but constructive it was not.

Then Zuma got to do his final two songs in front of an ANC audience. Umshini Wami was, strangely, perfect. It book-ended a very difficult decade for all of us. It was also a reminder of the power of a song, and of the man, that we first experienced all those years ago outside the High Court in Pietermaritzburg.

But, eventually, and I really do mean eventually, finally, the election officials came onto the stage. The singing subsided and the crowd settled. And the announcements came.

Man! God. Crap. This was close. So close. A difference of just 179 votes. Probably smaller than the number of votes disqualified in the various court battles. And surely not enough to remove Zuma from the SA Presidency.

Then the other announcements, the numbers you already know, the surprise of David Mabuza, the shock of Ace Magashule, the amazing return of Jessie Duarte. And of course, Gwede Mantashe and Paul Mashatile.

It’s a Top Six split exactly down the middle. There is plenty of scope for conspiracy here. But for them to have any substance, it would require the slate politics to work out properly. And the numbers just don’t back it.

Democracy. It really is a bad form of government (apart from, you know, all the others).

Honestly, I don’t know what happens next. Mantashe and Duarte already can’t stand each other. Ramaphosa and Mabuza have completely different and contradictory constituencies. The claims – criminal claims – against Mabuza are very strong. He is, of course, the only Premier to throw a journalist in jail for something they worked on. How does he win urban votes for the ANC? Magashule managed to get his provincial executive committee disqualified from voting at this conference, and at the 2012 conference in Mangaung. And now he is in the hardest job in South African politics? And what does Ramaphosa do in this situation? He doesn’t really have a mandate to do much.

It’s been a long day, folks. There is so much more to say about all of this. It’s a hot political mess, it will take a long time to untangle. And the balance of power may now rest in the national executive committee. And it could come to a result exactly as messy as the Top Six.

For now, it’s time for me to say goodnight to Bruce, to wish Karima good luck for her show, to wave to the newsroom, still hard at work, and head home. I haven’t fed the dogs yet. I hope Spock’s okay. DM

Photo: Nkosazana Dlamini Zuma and Cyril Ramaphosa after the announcement of the results of the ANC’s leadership election at the 54th National Conference at Nasrec, Johannesburg, December 2018. Photo: Daily Maverick/Leila Dougan.