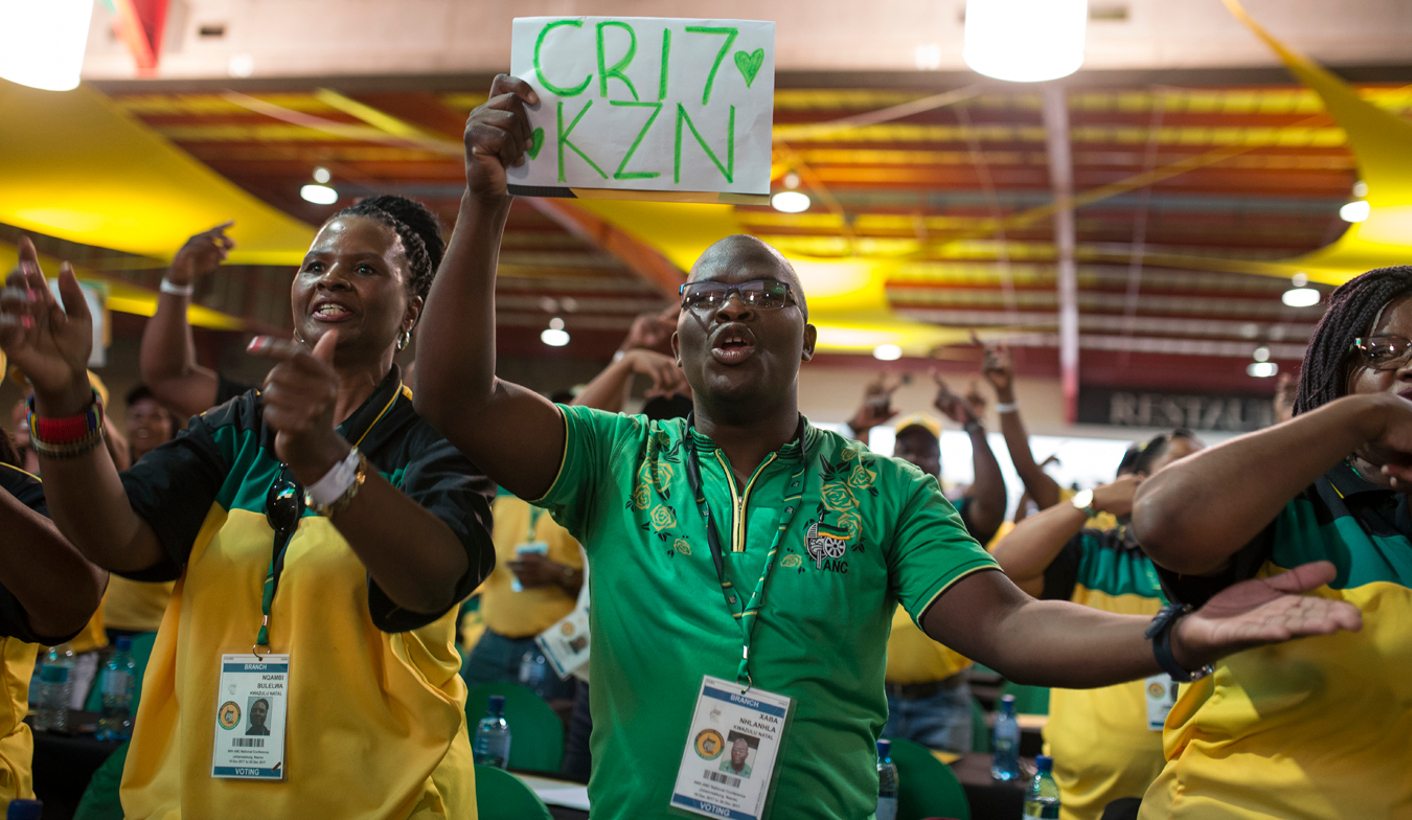 ANC conferences are supposed to be a festival of ideas, but for any presidential contender to win the party’s 54th national conference, they also need the numbers. The fact that the official start of this gathering had already been pushed back by a day shows exactly how closely contested this election will be. By CARIEN DU PLESSIS.

The first salvos were fired on Friday, when busloads of delegates to the ANC’s elective conference arrived at the University of Johannesburg to pick up their accreditation tags. Registration was already supposed to have happened in the provinces, but with outstanding disputes in some provinces, notably KwaZulu-Natal, North West and Mpumalanga, there were always going to be glitches.

At the registration hall on Friday there were already some scuffles when some delegates from the camp of Deputy President Cyril Ramaphosa claimed that officials supporting ANC MP Nkosazana Dlamini Zuma were blocking their registration.

Earlier on the same day the Dlamini Zuma camp was dealt a heavy blow by three separate court judgments effectively disqualifying delegates expected to vote for her from participating in the conference.

ANC Secretary-General Gwede Mantashe, at a packed press conference on Saturday morning shortly after the national executive committee had met on the matter, said a decision was taken that “the structures that are nullified will not be voting delegates at conference”.

He said: “We are not going to try any idea that will actually contaminate (the) conference.”

These delegates would be allowed to be observers, but they would not be granted a vote in case this could be used as a basis for a court case later that would nullify the entire conference. The party wants to avoid this at all costs. First, conferences don’t come cheap, the ANC would end up looking bad, and besides, we know the rand doesn’t have a strong tolerance for excitement.

Ramaphosa supporters on Saturday claimed Dlamini Zuma supporters were desperately trying to deplete the CR17 numbers to make up the gap after the court cases. In KwaZulu-Natal, they claimed that 32 branches from six regions, some of them highly contested, were refused registration. It appears the discredited PEC could have been trying to flex its muscles in this case. “Radical attempt to steal the conference,” the message from the Ramaphosa guys read.

The Mail & Guardian reported that Ramaphosa supporters were also preparing to query some issues in the plenary (which will be closed to the media) where conference credentials (i.e. the numbers) are going to be discussed.

Apparently KwaZulu-Natal’s delegation grew to more than 900 delegates whereas the province was only allocated 870, all of which would not have been entitled to attend anyway because there were branches that didn’t manage to hold successful branch general meetings.

“We will go through each and every name on the credential list to make sure that everyone who’s there is allowed to be a voting delegate,” an NEC member told that publication.

There are a number of ways to rig this conference. Provision is made, for instance, for delegates to be substituted should they be too sick or should a family emergency prevent them from being at the conference. They have to produce evidence, like a medical certificate, in order to allow such a substitution, but for the right amount, some say this isn’t too difficult to do.

Such a delegate is then substituted with someone who would favour the camp doing the supposed bribing.

There are also huge gaps in the registration system itself, despite the party having done this conference thing numerous times.

The difficulty many journalists experienced with getting accreditation because, say, a wrong ID number was captured, some blue stickers on which an instruction is written ran out, or just because of bad planning, attested to this.

Video clips circulated on Saturday showing spirited caucus meetings of both camps, attended by masses of yellow T-shirted delegates. Ramaphosa’s camp counted 2,714 delegates in its favour by Saturday afternoon, as opposed to Dlamini Zuma’s 1,905, but this is next to impossible to verify independently.

On the plenary floor shortly after the opening, Dlamini Zuma’s camp already tested the waters by contesting something as petty as a programme change.

ANC KwaZulu-Natal chairperson Sihle Zikalala, who is attending as an ordinary branch delegate with observer status only after the court ruling, accused chairperson Baleka Mbete of following an amended programme which wasn’t approved by the NEC. After a brief exchange, and after a pushback from the Eastern Cape, the matter was laid to rest and the programme continued.

Zikalala’s strategy was, however, not so much to change the programme as to just flex his muscles. This opening salvo is supposed to provide him with a platform for other, more serious salvos about, say, delegate numbers and constitutional changes.

Zikalala is a veteran at this strategy. He was also the first delegate to have spoken at the party’s 2007 conference in Polokwane – where he and the Zuma camp ultimately had the last word too.

The adoption of credentials (that is, the approval by conference of the numbers of delegates accredited from each province) marks the start of official proceedings. Ceremonial things, like opening prayers, President Jacob Zuma’s political report, and messages of support from fraternal organisations, don’t need these credentials, but voting, adopting changes to the party’s constitution, adopting the financial report, and passing resolutions on policy, all need credentials.

The original programme had these credentials down in a 30-minute slot during lunch time. After delays, the new plan was to do these credentials on Saturday night after the dinner which followed the opening plenary session, but by 22:30 this session was adjourned too so that more meetings could be held on registration and credentials.

This means that the fight over credentials is only expected to kick off when plenary resumes on Sunday morning, and if the overnight meetings were not successful in resolving the issue, this could take a good few hours.

The overnight pause allows delegates to have more caucus meetings for horse-trading on slates and perhaps to negotiate compromises where needed. (Already presidential contender and party chairperson Baleka Mbete indicated on Saturday that she was throwing her weight behind Ramaphosa, so there might be some talks going on around getting her into his list somewhere.) The sing-off on the conference floor during the plenary indicated that support is fairly evenly divided between the camps, although the lack of enthusiasm in the singing after Zuma’s speech indicated that his support in the party has dwindled. This bodes badly for Dlamini Zuma, who is Zuma’s preferred candidate despite his recent denials.

Earlier this week Mantashe said South Africans would know by Sunday morning who the new ANC president would be. With the programme pushed back like it has been, and with the fight being as fierce as it is, they will probably have to wait until later on Sunday to find this out. DM