#ANCdecides2017: Media kept penned as delegates caucus through the day 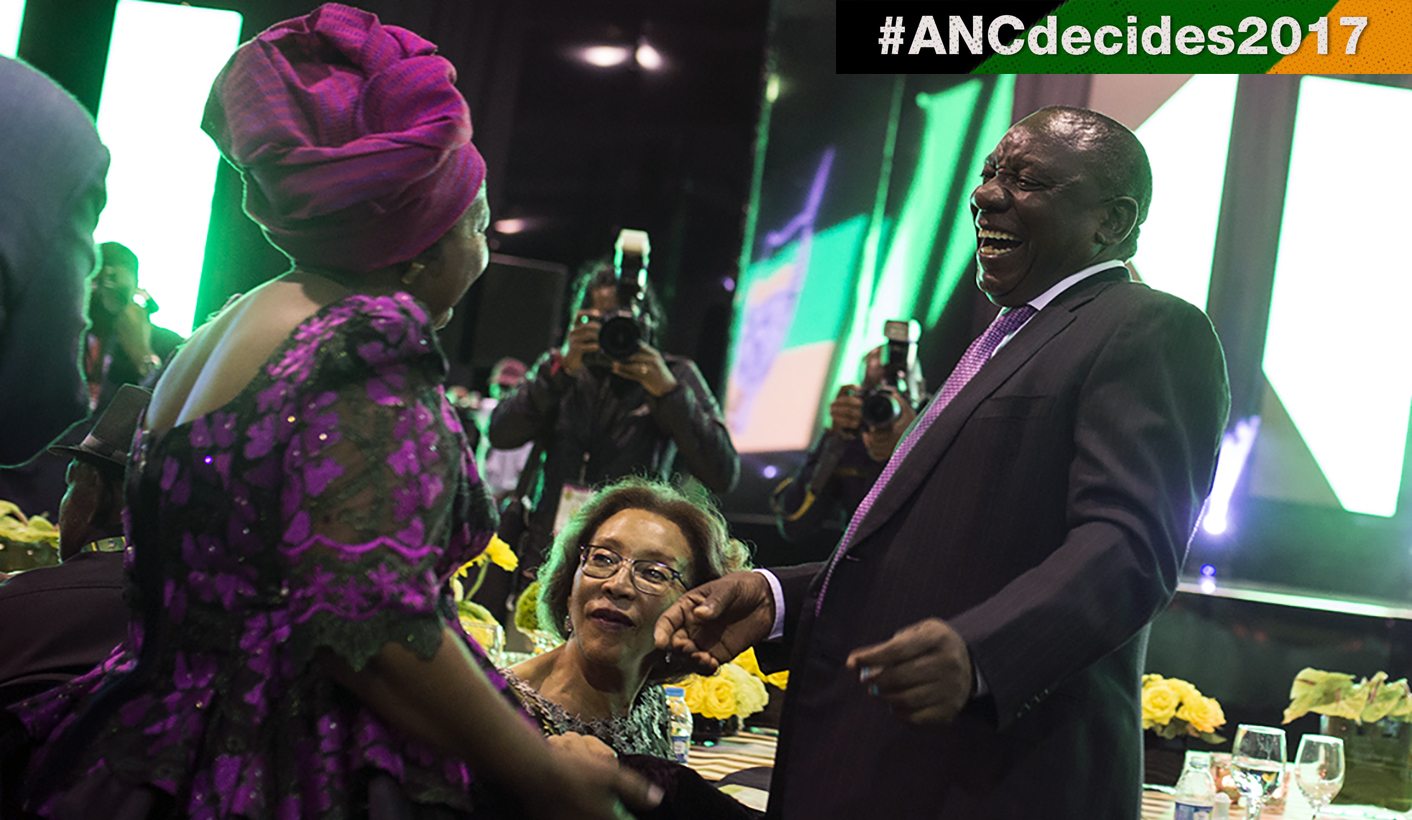 It wouldn’t be an ANC congress if things didn’t get off to a slow start, and the first morning of the ruling party’s 54th elective conference held true to form. Scheduled to start at 9am, the conference ended up delayed for over five hours amidst ongoing wrangling about the status of delegates from three provinces, and an emergency NEC meeting. With delegates kept away from journalists as if the latter had an infectious disease, media was reduced to peering from afar. By REBECCA DAVIS.

There are journalists and there are ANC delegates, and never the twain shall meet.

This is how things work at the ANC’s elective congress at Nasrec, where a series of fences separates journalists from delegates. The division of the two groups is at its most absurd when the delegates process into the food hall, which they do by walking down a fenced-off channel while journalists look on from behind bars – so to speak.

Photo: Delegates gather at Nasrec on Saturday for day one of the elective conference. Photo: Leila Dougan/Daily Maverick

Delegates may sing and dance to show support for their chosen candidate, but trying to get a word out of them in public is difficult. All Daily Maverick was able to extract from tight-lipped delegates exiting the food hall was that lunch was “okay” and the conference T-shirts satisfactory. Talking to the media is a no-no – unless it happens via WhatsApp, the channel many reporters rely on for leaks from sources at this time.

Communications face to face are virtually impossible. If one of the ANC’s hired security guards doesn’t intervene, you may still be noted by a State Security Operative. Spies are allegedly undercover throughout the Nasrec complex.

All this secrecy applies mainly to the lowly branch delegates, of course. If you’re higher up the ANC food chain, you may want to seek out journalists to spread a particular message at this stage of the conference.

This was very much the name of the game with Team Dlamini Zuma on Saturday morning. Dlamini Zuma’s campaign manager Carl Niehaus, and her staunch supporter ANC Youth League president Collen Maine, were both doing the media rounds following the decision of the ANC’s NEC to rule votes ineligible from the contested branches in KwaZulu Natal, Free State and North West. This is likely to put a dent in numbers for Dlamini Zuma.

Photo: A few hours after the elective conference was due to start on Saturday morning, Gwede Mantashe convenes a media briefing. Photo: Leila Dougan/Daily Maverick

A slightly glum-looking Niehaus told journalists that the Dlamini Zuma camp would “accept” the decision, but he added slightly ominously: “If there is disagreement, we will deal with it in the plenary”.

Collen Maine, meanwhile, was looking resplendent in a colourful T-shirt bearing the faces of former Youth League presidents. With regards to the ineligibility of delegates: “We don’t really care,” claimed Maine. He said their dispute was with the timing of events. “Judges are becoming political,” he warned darkly.

While Maine and Niehaus were bending journalists’ ears, there were no corresponding appearances from Team Ramaphosa. Perhaps they had better things to do.

For the first few hours of Saturday, with the NEC shut in its emergency meeting and branch delegates yet to arrive in numbers, the sole person of eminence wandering around the Nasrec complex was one Tokyo Sexwale.

“Jacob Zuma is in the departure lounge,” said Sexwale, urging the ANC to look forward. He admitted, however, to being nervous about the conference’s smooth progress.

On the road to Nasrec, police maintained a visible presence. Above the conference centre, a small police plane flew by alarmingly low. Security was less intense than it has been in the past, however: no X-ray machines, and the Daily Maverick’s sack of emergency snacks passed without comment.

The face of OR Tambo lined one wall at the facility, reminding delegates of their party’s more august history. The abandoned fun fair neighbouring Nasrec provided an alternative metaphor for the party’s current state: twisted roller coasters and disused carousels.

Inside the media pen, journalists from all over the world tried to look busy for several hours. On Friday, ANC officials had said that the volume of media applications for the conference was such that, if granted, journalists would have outnumbered delegates two to one.

A notice pinned to the wall informed journalists that the Telkom wifi service was already down in the media area, only a few hours into proceedings. Journalists made do with personal hotspots, with one named “AlreadyOverThis” summing up a wider sentiment.

Energy picked up as delegates began to arrive in a flurry of sound, however. Some good-natured ribbing was evident between delegates of different camps.

“Look at the numbers,” shouted Ramaphosa supporters as a Dlamini Zuma group entered.

Song references to the “buffalo” indicated support for Ramaphosa, despite the dubious origins of that nickname – pointing to the R18-million that Ramaphosa bid for a buffalo at auction some months before the Marikana massacre.

Branch delegates gathered shortly before lunch on opposite sides of the precinct to do some last-minute caucusing. In one camp, Eastern Cape ANC chairperson Oscar Mabuyane – a Ramaphosa supporter – could be seen addressing delegates.

As a poignant sideshow, sweating in furs were a delegation of Khoisan leaders who had arrived in the hope of an audience with ANC top brass. They have about the same chance of success as Mathews Phosa’s presidential bid.

Lunch, when served, proved plentiful and edible: rice, pap, a sweet tomato sauce and pieces of chicken and beef. Worries of poisoning among delegates – a concern which circulated before the conference – seemed to have been forgotten as they tucked in. Journalists eating in the media hall suffered a rapid shortage of cutlery. Hands and teaspoons had to suffice as food shovels in some cases.

As 3pm drew near, the plenary hall was finally full and events looked set to start – amidst ongoing rumours of problems and delays with the registration of delegates.

The men and women of the moment have, at time of writing, filed on to the stage to await their fate. It could be a long, acrimonious wait. With the bonhomie of Friday night’s gala dinner now a distant memory, the gloves are about to come off between the camps of Dlamini Zuma and Ramaphosa.

The Doctor versus the Buffalo: stay tuned. DM

Update: the conference got under way shortly after 3.30pm.